Keeping your teeth looking white is about more than just regular brushing and flossing. While good hygiene habits are undoubtedly crucial in keeping your mouth healthy and your breath fresh, brushing alone doesn’t always deal with pesky yellowing and stains that can come from coffee, tea and other foods.

Crest 3D Whitestrips have been around for two decades already. (Does that make anyone else feel old?) The company has since expanded its teeth whitening offerings to include emulsion kits, consisting of a tube of hydrogen peroxide-based paste that’s applied directly to each tooth using a wand applicator. It’s a leave-on formula that’s great for busy schedules and on-the-go use. The dentist-recommended brand also makes whitening kits with an LED accelerator light that helps weaken tough stains below the enamel.

It’s true; Crest makes a lot of different whitening products. If you’ve wanted to try them but aren’t sure where to start, the Crest website has great deals on most of the brand’s whitening products, including the most popular Crest 3D White Strips. These are some of the best deals to check out right now. Now that’s something to smile about.

The Whitening Emulsions kit includes a tube of the whitening formula, which you squeeze out similarly to how you would use a tube of toothpaste. Instead of brushing it onto your teeth, you use the soft wand applicator included in the kit and glide it on your teeth rather than brushing. The paste is designed as a leave-on formula rather than something to rinse, and you can use it up to four times a day. Right now, the kit is $10 off the $60 list price, and they also throw in an Oral-B Clic toothbrush with code “FREECLIC.” 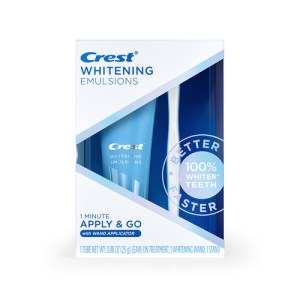 If you want to try the whitening strip that started it all, Crest has cut the price in half. In HALF. The kit includes 40 whitening treatments designed for use once a day and left on your teeth for 30 minutes. The 3DWhiteStrips are a perfect mess-free option because no gel can spill or leak, and the chance of resulting sensitivity is slim-to-none. Simply peel the strip from the backing and apply them to your teeth. It’s that easy. The total price of the kit is $90, but currently, they’re on sale for $45. No additional code is applicable. 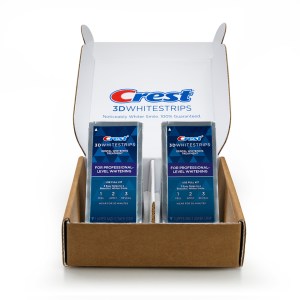 To make 3DWhitestrips work even faster, buy the kit that includes the strips and the LED light. The small handheld LED light utilizes the same blue light technology used by dentists, and it’s designed to accelerate the teeth whitening process by penetrating below the enamel’s surface. A total of 14 treatments are included in addition to the orally ergonomic light. Take $20 off the $70 kit using code “ALLSMILES” 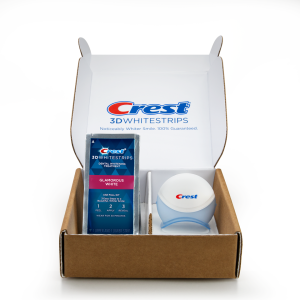 If you want to upgrade your entire dental hygiene routine, consider picking up this bundle, which includes an Oral-B iO Series 9 electric toothbrush, replacement heads, plus the 3D White Strips with LED light. The kit retails for $460 but is on sale for $325. That means you save $135. 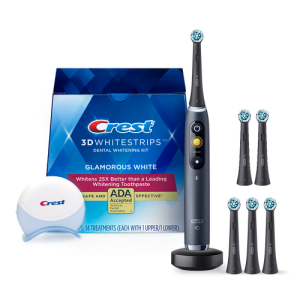