If you’re asking, “Why can’t I use Q-tips to get rid of ear wax?”, then let us start by saying that sticking a Q-Tip in your ear is not the right way to get rid of earwax. In fact, putting anything smaller than your elbow inside your ear canal can be downright dangerous.

So how do you get rid of ear wax?

First, put down the Q-tip and cotton swabs. Instead, you will need to rely on liquids to soften earwax and water to flush the softened wax out of the ear canal. Home remedies based on this method are safe, simple and effective.

However, before we dive into the details, it is important to note that if you suspect your eardrum is damaged in any way or your ears are prone to infection, please consult a doctor. In addition, if you feel uncomfortable performing these tasks at home or they are ineffective for your ears, a doctor will be able to perform more targeted earwax removal.

1. Use Baby Oil to Soften Wax

If you feel like you have too much wax in your ears or you are experiencing a blockage, the first step for removal should be to soften the wax. There are numerous over-the-counter drops for this purpose, but one of the best methods is to use baby oil or mineral oil. Simply tilt your head, put a few drops of the oil in your ear canal, wait three or four minutes, then tilt your head the other way to let the oil drain. This will break up any hard wax and allow the blockage to work its way out of your ear canal. 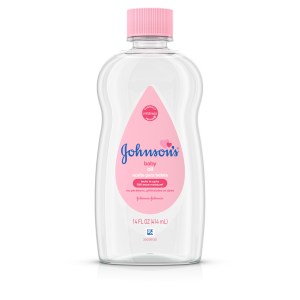 2. Rinse Out Your Ears

A few days after using oil to soften the wax in your ears, it may be necessary to rinse out the ear canal. This will remove any of the wax that hasn’t worked itself out of your body naturally. The best way to rinse your ears is to use a bulb syringe full of room temperature water. You’ll need to flush the water into your ear, pull on the exterior of your ear to straighten the ear canal, and then tilt your head to let the water (and wax) drain out.

With this ear wax removal method, gravity and water do all the work. 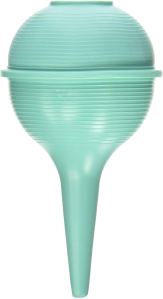 Although similar in effect to baby oil, the bubbling and fizzing of hydrogen peroxide can be slightly more satisfying. For a fast-acting home remedy for ear wax, a little hydrogen peroxide is a time-tested solution.

This liquid is actually a cerumenolytic, which means it can soften and dissolve cerumen, a.k.a. earwax. Many over-the-counter ear drops actually contain hydrogen peroxide as the main active ingredient, so skipping the fancy packaging and buying a bottle of hydrogen peroxide then diluting it with water can be just as effective and save you money at the same time.

If you don’t want to worry about gathering up bits and pieces for an ear cleaning routine, consider investing in a specialized ear drops kit, like this one from Debrox. One of the leading names in ear care, the Debrox ear drops are carbamide peroxide-based, which creates a satisfying foaming action as it dissolves your earwax. The kit also includes a bulb syringe for flushing out your ear with water after you’ve used the drops. 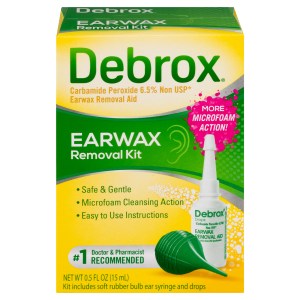 Some scientists believe that people with hairy ear canals produce more earwax than average. If you feel like this might be the cause behind your excessive waxiness, try trimming the hairs in the outer ear canal with the FlePow Ear Hair Trimmer. Not only will this reduce ear itchiness, but trimming the hair sticking out of your ears (and nose) will also give you more of a groomed appearance. 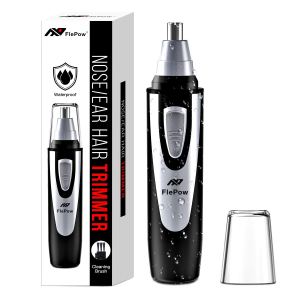 If you have a family full of waxy ears or you prefer a little more oomph when flushing out your ears, you might want to invest in an ear irrigation system rather than a bulb syringe. The Migelo Ear Wax Removal Kit is one of the many spray bottle-esque systems for removing ear wax. This kit includes removable, disposable tips, so you can clean multiple ears without needing to clean the syringe each time. In addition, this tool comes with a basin to catch the water and wax as it leaves your ear canal. For slightly better results, consider adding a few drops of hydrogen peroxide to the bottle along with lukewarm water. 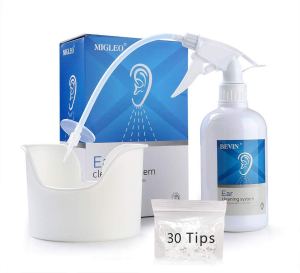 While we’ve talked a lot about cleaning out your ear canals, we haven’t yet discussed what to do if you have earwax on the very edge or outside of your ear. The best way to deal with visible earwax is to wipe it away with a dampened washcloth. Don’t try to penetrate the ear canal, but do massage the exterior of the ear until it appears clean. These Cotton Craft Washcloths are ideal for the job, but just about any washcloth will do. 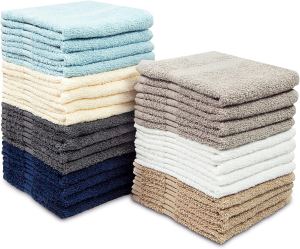 After you’ve used your drops, flushed out your ear and wiped it down with a damp washcloth, you’re going to feel pretty waterlogged. The best solution for wet ears is to dry them using a hairdryer. This method won’t irritate your ears and will promote the outward movement of any ear wax still stuck in the ear canal. Just make sure you are using the hairdryer on low or on the cool setting to prevent potential burns. 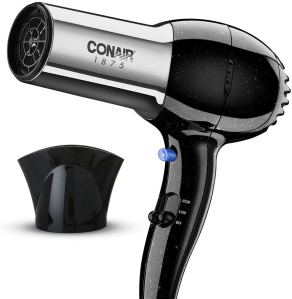