Dental health, along with your physical and mental health, is crucial to your overall well being. There are many ways to take care of it, from the more conventional methods like brushing with an electric toothbrush, flossing daily, using a water flosser and swishing around mouthwash — to the unconventional. Oil pulling is an ancient ayurvedic practice that’s gained some popularity in recent years for its supposed dental benefits. Theoretically, it’s supposed to get rid of bacteria, whiten teeth, reduce gum inflammation and help with bad breath. I’ve only oil pulled a few times, and I can tell you that while it is a strange experience my teeth did, anecdotally, feel cleaner afterwards.

But does it help, really? Is it a practice most people should consider adding to their routine? We asked some dental experts their thoughts and the reviews are in. They’re… mixed, to say the least. In this piece we’re going to dive into this controversial practice, explore its origins, teach you how to do it and, if you’re interested, recommend a few oils you can purchase online to use.

What is Oil Pulling?

Oil pulling comes from the ancient Indian health system of ayurveda, that encapsulates a wide range of regimens and rituals surrounding taking care of your health. Oil pulling involves swishing around oil in your mouth for 15-20 minutes and removing bacteria that may cause bad breath, plaque, cavities and gum inflammation.

Puneet Nanda is a yogi, serial entrepreneur and founder of GuruNanda (www.GuruNanda.com), a company devoted to improving well-being and reducing stress with simple practices and products based on ancient Ayurvedic principles. He explained that oil pulling has been “traditionally practiced for thousands of years as a way to detox and rejuvenate.” GuruNanda also makes some of the most popular all-natural mouthwashes and oil pulling products available, if you’re curious about giving the practice a try. We’ve included a few of their products further down in the piece.

Certain studies have indicated that oil pulling may be just as effective as mouthwash in treating and preventing certain mouth ailments.

One study of 60 adults showed that oil pulling with coconut oil for 10 minutes a day “significantly reduced” the presence of S. mutans in the mouth, a bacteria that contributes to tooth decay, in saliva after just a few weeks.

Another study with younger children showed that coconut oil was as effective as a regular chlorhexidine mouthwash at reducing the prevalence of S. mutans in the mouth. Other studies also pointed towards coconut oil pulling being effective at warding off inflammation in the gums, also known as gingivitis.

How Do You Pull Oil?

The process for oil pulling involves the following steps:

How Often Should You Pull Oil?

Nanda explained that oil pulling is “ideally a daily regimen; most people perform it while in the shower, where they can swish oil for 10-15 minutes for full effectiveness. We recommend starting with 1-2 minutes and slowly building up time as your jaw muscles gain strength.”

It’s a simple practice with some supposed benefits, but I was skeptical about the actual effects. I talked to three dentists, in addition to Nanda the ayurvedic specialist, about oil pulling and received some helpful insight into how this ancient practice can help, or potentially hurt, modern dental hygiene.

Dr. Casey Lau is the Chief Dental Officer at Elims, a dental hygiene brand that specializes in remedies made of plant-based ingredients. When asked about the supposed benefits of oil pulling, he explained that “Frankly speaking, there are not a lot of studies that have been done with proper scientific measurements. No double-blind studies or anything.”

Dr. Alexia Aguil, DDS and owner of Exquisite Dentistry, when asked the same question, also noted that “The medical claims of Ayurvedic oil pulling are entirely unconfirmed, but there may still be something to it. Sesame oil has been found to moderately inhibit the growth of bacteria, including the kinds that cause dental plaque. So it’s possible that sesame oil pulling may have the benefits of a low-strength mouthwash.”

I also asked each dentist about potential health drawbacks or harm oil pulling could cause. Dr. Lau explained that “As long as the oils are pure there shouldn’t be too much harm done with oil pulling. The problem becomes if the oil is a “holistic oil” that is unregulated. It could contain substances that are toxic and harmful. But most practitioners use pure oils you can get from your local grocery store.”

Dr. Riddhi Gangolli BDS, MS, PhD with SmileDirectClub explained that “The most significant danger of oil pulling is if the practice is used in place of daily oral health practices. Additionally, oil pulling can cause nausea, headaches, tooth sensitivity, jaw pain, and dry mouth. That said, it will not reduce bacteria, whiten teeth or reduce cavities.”

Dr. Aguil also explained that any claims related to “detoxification” are false. “Your liver and kidneys do an excellent job at detoxifying your body naturally. These kinds of health claims are largely gimmicks. The medical benefits of detoxification in proper tests can be almost entirely ascribed to the placebo effect.”

It makes sense, coming from a dentist, that they wouldn’t want anyone replacing their regular brushing and flossing with an ancient Indian practice that was used before toothbrushes and dental check-ups were available. However, none of the dentists I discussed the method with refuted it as dangerous to your dental health, so long as you keep up with your other healthy habits. If you’d like to try oil pulling and see what it’s all about, we’ve included a few recommended kits below.

GuruNanda’s natural mouthwash is non-GMO, alcohol-free, fluoride-free and is made using a combination of sesame oil, sunflower oil, coconut oil and peppermint oil. It contains nothing artificial and is rich in Omega-3 fatty acids, iron, calcium, magnesium and Vitamins A, B and E. 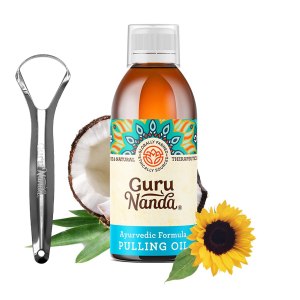 This is GuruNanda’s new and improved pulling oil that’s got an enriched formula of essential oils, and is still made of 100% natural ayurvedic ingredients. It includes a tongue scraper for extra cleansing, and the formula is 100% alcohol-free and vegan. It’s got refreshing flavors including cardamom, clove and mint, and it also contains Omega-3 fatty acids and vitamins and minerals. 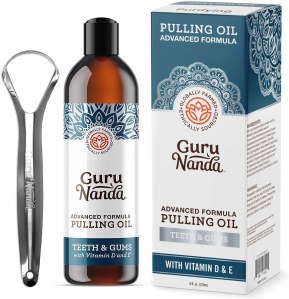 This pulling oil is made of 100% raw coconut oil, and is designed with peppermint to help freshen breath, whiten teeth and strengthen your gums as well. It also includes a balm to help lips retain moisture and resist sun damage, and it’s made chemical-free. 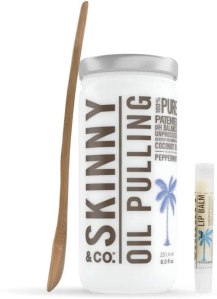 This “ayurvedic tonic” is a super mint oil pulling mouthwash that contains flavors and scents including luscious rose, clove and mint. It’s designed to cleanse your mouth of microorganisms  and is designed to be used like a regular mouthwash, after brushing and flossing. It comes in four different flavors and is alcohol-free and vegan. 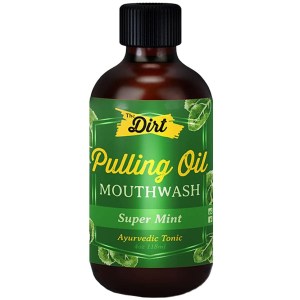 Dr. Ginger’s all-natural coconut oil mouthwash is made using coconut oil with a refreshing mint taste. It’s designed to naturally freshen your breath and promote gum health as well. It’s formulated to cleanse your mouth of toxins and bacteria without the use of harmful chemicals, and only needs to be used for two minutes daily to be effective. 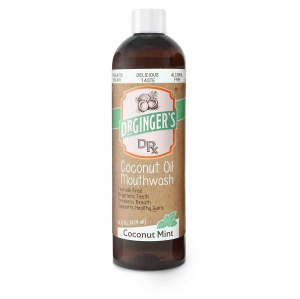