As a beauty aficionado, I just love when new skincare and makeup products hit the market — especially when they claim to get rid of fine lines, erase enlarged pores and magically plump and tighten sans injections. But while gimmicky products are notoriously fun to play with thanks to their novel charm and strong social media presence, they don’t often tend to actually y’know, work.

When we wrote about the PMD Kiss in our original story, I was instantly intrigued by this new and mysterious lip-plumping technology packaged in a compact pink device. While I have used a slew of different lip plumping products on the market from both high-end and drugstore brands (usually in the form of balms and glosses that feel like a bee sting on the mouth) I had never seen something battery-powered intended to enhance the lips. Since lip injections aren’t in my current beauty routine, I figured this just may be the next best thing to achieving that coveted fuller pout. 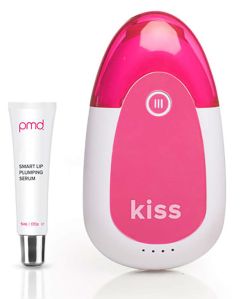 The PMD Kiss Lip Plumping System includes a pretty-in-pink suction device, a USB charging cord, a potent lip plumping serum, and two changeable “kissers,” which help to adjust the size of the suction tip. For best results, it is suggested to use both the device and the serum in unison, though in my experience, they also worked pretty well individually also.

Now for the fun part of the story. After charging the device for a couple of hours, I turned it on at the office during normal work hours (perhaps not the best idea) and it began its gentle pulsations on my mouth. The subtle buzzing noise drew some heads on this abnormally quiet day in the office, especially since the peculiar noise was coming from a bright pink suction device that I was holding up to my mouth as it pulled at my lips. “Does it hurt?” several co-workers asked me. No, not at all.

You definitely feel the device “sucking” at your lips, but the motion is super gentle and did not cause any pain at all whatsoever. Though the pulsing sounds are somewhat audible, they certainly aren’t loud. While someone sitting next to you may hear the device, that’s about as far as its subtle sound will travel.

As directed, I first applied the lip plumping serum. Like most lip enhancing serums and glosses, this one also caused the bee-sting sensation, with a tingling feeling that lasted at least ten minutes after applying. I actually liked this. This tells me that the product I am using is working, and not just adding shine and moisture like so many “lip-enhancing” products with empty claims that I’ve wasted my money on. The serum (which can be purchased separately) is much stronger than other lip-plumping formulas I have tried –including the pricier ones.

Next, I placed the suction nob on each of the six sections of my mouth (from top to bottom, corner to corner), letting the device pulse for ten to twelve seconds on each section. After the pulsing was complete, I instantly headed into the bathroom with my camera in tow to inspect the results. There was definitely a marked difference from before I used the device and after. I did add some clear gloss for my after shot, but the volume of my pout was noticeably enhanced.

Another benefit to the product that I found especially appealing, was that the device instantly restored a natural flushy color to my mouth—similar to the rosy neutral hue that my lips were naturally endowed with when I was kid.

I thought that the plumped effect would last for maybe an hour if I was lucky. Surprisingly, the rosy hue and plumped pout lasted for hours after I used the device. About 6-8 to be exact, though to be fair, I did go to sleep eight hours after I used it, so my time frame may even be under-estimated. 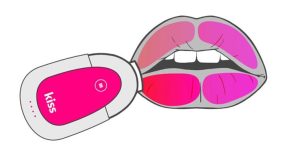 According to PMD, this product will also help reduce the signs of aging on the mouth with continuous use over time. Apparently, the suction’s pulsing action helps generate collagen production (which slows down as we age), which can help gradually fade wrinkles and restore fullness to mouth.

Overall, I am really impressed with this product. It performed well above my expectations and I was especially pleased with the pout and the restored color to my lips (that lasted for a couple days). The plumped effect worked as promised and it gave my mouth a fuller, more supple look for hours and hours.

The PMD Kiss is a quick and painless alternative to pricey injections or less-than-satisfying lipsticks and glosses, and it’s easy and discreet enough for me to use again and again. Simply charge it via the included USB cable and you’re good to go in less than two hours. Forget about what you see in Hollywood, this is a real-life tool to achieving that perfect pout that anybody can do at home.

If you buy something because we told you about it, we may receive compensation from retail partners. While we did get to try out this product for free, PMD did not pay us for this review.