If you still haven’t jumped on the self-care bandwagon, we truly can’t think of a better time to start than right now. Who needs self-care more than during a global pandemic that has everyone stressed out?  To help guys out, Garrett Munce, grooming editor for Esquire and Men’s Health, literally wrote the book on it: Self-Care For Men. Published by Simon & Schuster, Munce’s book will be released on May 5, 2020.

To help guys learn the basics of self-care under quarantine, we talked to Munce about his best recommendations. The author also shared some excerpts from his new book, which you can read below.

“Self-care is something we should all be focused on now more than ever,” Munce says. “As more people are forced to look inside for comfort, self-care is a resource we all have at our fingertips. Men are notorious for neglecting themselves, but with so many of their usual outlets unavailable right now (like going to the gym, hanging out at a bar with friends), self-care can be a good way to manage stress and anxiety. Understanding that self-care isn’t just about looking good is the first step. Simple practices can actually help you chill out, decrease stress and sleep better at night.” 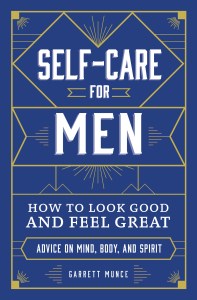 Courtesy of Simon and Schuster

While it’s equally important for everyone to practice self-care, it can often feel like the self-care movement is targeted more to women.

“Self-care has no gender, but the reason we typically think of certain self-care practices like bathing or skincare as feminine is because of marketing, plain and simple,” Munce says. “These activities are not inherently masculine or feminine and anyone can get benefits from them regardless of what gender they are. I believe that the reason men are sometimes resistant to self-care practices is because they like simplicity and tend to not want to do things that take up too much time or they see as overly fussy. But self-care can be anything you want it to be. In fact, you may already be doing things that could count as self-care, like working out or cooking a healthy meal, as long as you reframe how you think of them. The sooner men see self-care as more than just a bubble bath (and that it can actually be anything), the sooner they’ll be able to reap the benefits.”

Getting started with self-care for men is easier than you think. “Don’t overwhelm yourself and start simple,” Munce advises. “Think about things you’re already doing that make you feel good. It could be washing your hair, shaving or doing yoga. Then decide to think of it not as something you have to do but as something you want to do. Do it with the intention of caring for your body and your mind; go through the process slowly and with patience instead of rushing through it. If you want to adopt a new self-care practice, be practical and realistic. Don’t expect to be able to meditate for an hour if you’ve never done it before. Start with just five minutes and work your way up from there.

“Self-care practices are called practices for a reason — it’s more about the process of doing it than getting somewhere specific. A self-care routine could also be something as simple as relaxing with a face mask once a week or washing your hair with a special shampoo. It could mean applying a nourishing oil to your beard or going to bed a little earlier. It’s completely up to you.” 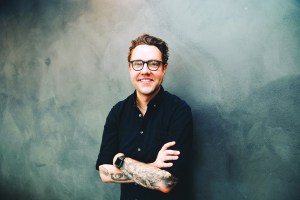 To prove you’re not alone, celebrities like David Beckham, Snoop Dogg and Adam Levine, to name a few, make self-care a key component of their wellness regimen. Munce shares a few self-care secrets from celebs in Self-Care For Men, including these excerpts:

Fashion designer Tom Ford is tasteful to the point of fastid­iousness. His entire life (home, wardrobe, smells) is so put together it seems fake. Case in point, when explaining his daily routine to Harper’s Bazaar in 2012, he admitted to tak­ing four baths a day. “I lie in the tub for half an hour and just let my mind wander. I find a bath meditative,” he said. By normal guy standards, multiple baths a day seems excessive, but Ford is definitely on to something. Baths can be restora­tive and they can also be energizing. It depends on what you do and what you need out of it. Still, so many baths a day is unrealistic, even for Ford. In another interview in 2015, he admitted his bathing had decreased to just one bath a day after becoming a father.

One of the most iconic moments in male grooming is the morning routine of Patrick Bateman in American Psycho. Meant to represent the epitome of eighties narcissism, by today’s standards it seems pretty tame. His “extensive” routine features an ice pack to depuff his eyes while he does crunches, a deep pore cleansing lotion and exfoliating gel scrub in the shower, followed by an herbal mint facial mask that he leaves on for 10 minutes. The rest is an alcohol-free aftershave, two moisturizers, and eye cream. Compared to skincare routines in 2019, it’s really pretty standard, except for maybe the peel-off mask. Using a peel-off mint mask every day could actually have a drying effect on his skin, even with his dual moistur­izer situation. Maybe a sheet mask instead with an exfoliating mask thrown in there once a week? Just a suggestion.

In an interview with GQ in 2019, rapper Frank Ocean became the patron saint of night cream. When asked about his skin­care routine, he dropped some serious knowledge. “I really do believe in a night cream,” he said. “You really need to do a gentle wash and put a night moisturizer on. I need the night cream because when I wake up I feel very beautiful, moistur­ized, and ready to have people making eye contact with me. That’s the life hack right there.” So next time you’re wondering if a night cream is too extra, remember: If it’s good enough for Frank Ocean, it’s good enough for you.

There is not a man in the world who holds as much power over men’s hair as David Beckham. It’s rare to see a man who so obviously uses his hair as a tool for expression. He has had literally hundreds of hairstyles, all of them iconic. Here is a brief history.