For men looking to up their shaving game beyond cartridge razors and safety razors, it might be time to consider picking up one of the best straight razors.

But, straight razors aren’t to be used casually. If you don’t know what you’re doing, you can seriously hurt yourself. To help us cover the basics of straight razors, we reached out to Soren Roi, a barber at Fellow Barber in Brooklyn. He told SPY all about straight razors, what’s good about them and how to use them.

Get the answers to common questions below and once you’re up to speed, we’ll take you through some of our favorite straight razors.

What’s a straight razor? What about a shavette?

What should I look for in the best straight razor?

There are a few important features to keep in mind when shopping for a straight razor.

First, the razor should have a nice weight to it. It shouldn’t be “so heavy that it’s hard to maneuver, but heavy enough that it helps cut through coarse beard hairs,” Roi said.

Second, style and aesthetics are important too. “When a tool feels special to us we tend to take more care using it and that’s important for straight razor shaving,” Roi said. (We’ll get into what goes into proper straight razor maintenance below.)

When it comes to shavettes, you want the same things too, but you also need to make sure it has a “simple mechanism” for swapping the blades in and out.

What’s the difference between safety razors and straight razors?

You’ll hear both “safety” and “straight” razors thrown around when talking about an upgraded shave, but they’re two different things. “Safety razors use a double-edged disposable blade that locks into place at a desirable angle for shaving,” Roi said. But they use the same kind of blade as a shavette, “which makes them a great way to introduce yourself to single-blade shaving and get the feel for it before you jump into straight razors.” On the other hand, straight razors have one long fully exposed blade, so there’s less room for error.

Why should I use a straight razor instead of another razor? 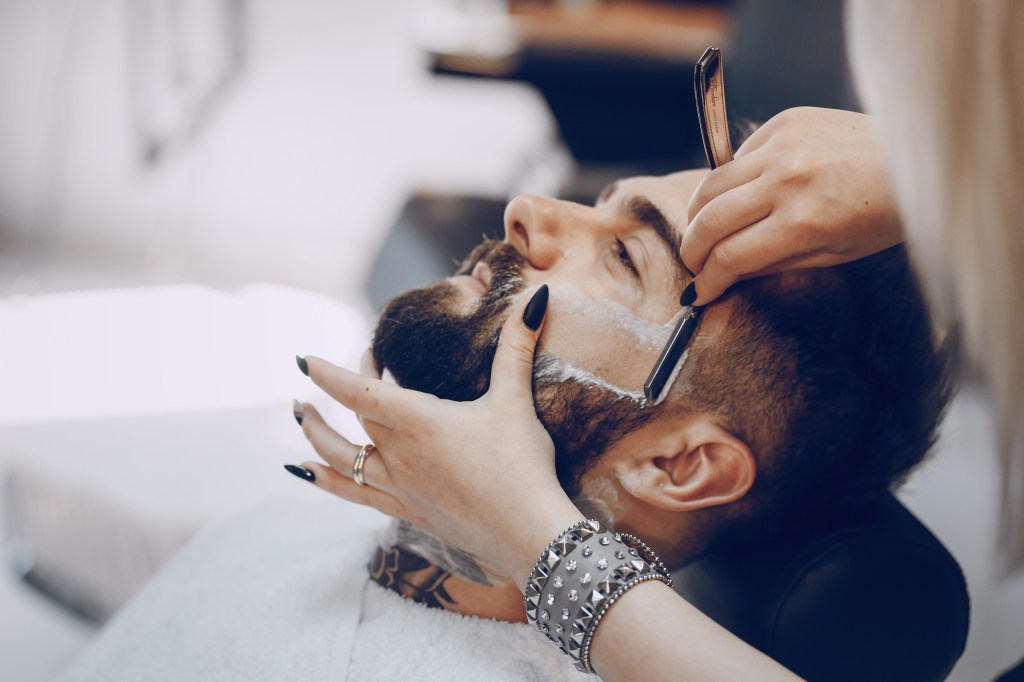 This all boils down to if it ain’t broke, don’t fix it. After years of packing as many blades into a razor as possible in the hopes doing so would deliver a better shave, “we are coming back to the realization that a single blade and some intentionality can be a better experience all around,” Roi said.

And that’s basically why you should use a straight razor: It’s a purposeful shaving experience that has never changed. “Straight razors are also good for anybody practicing mindfulness in their daily life. It’s a meditative process which brings intentionality to our morning routines,” Roi said.

Plus, there are practical benefits too. “What makes a straight razor still more effective is that it has an exposed blade which gives you the most precision to create sharp lines or get into corners,” Roi said. “The visibility of the blade you get from a straight razor allows for the cleanest lines out of any other type of razor. This is why it remains a staple of any barbers tool kit.”

I think I want to use a straight razor. How do I get started? How do I use it?

Before you sink some money into a brand-new straight razor, Roi recommends booking a straight razor shave with your local barber to see how it feels. If you like it, that’s when you might pick up a shavette and practice shaving without a blade, lather and all, Roi said. “This will help [you] gain the muscle memory and learn the angles you need to hit.”

Once you decide to make the leap to actually shaving, here’s what you need to know. In the interest of exactness, we’re going to quote Roi exactly as he told SPY:

As occasional straight razor users ourselves, we’ll also add to take your time, especially the first few times. At the same time, don’t overthink it: It’s a sharp blade and it cuts things, so just make sure you’re not too aggressive and you’ll make it out of your first few attempts with a few small cuts but otherwise intact.

How do I take care of a straight razor? 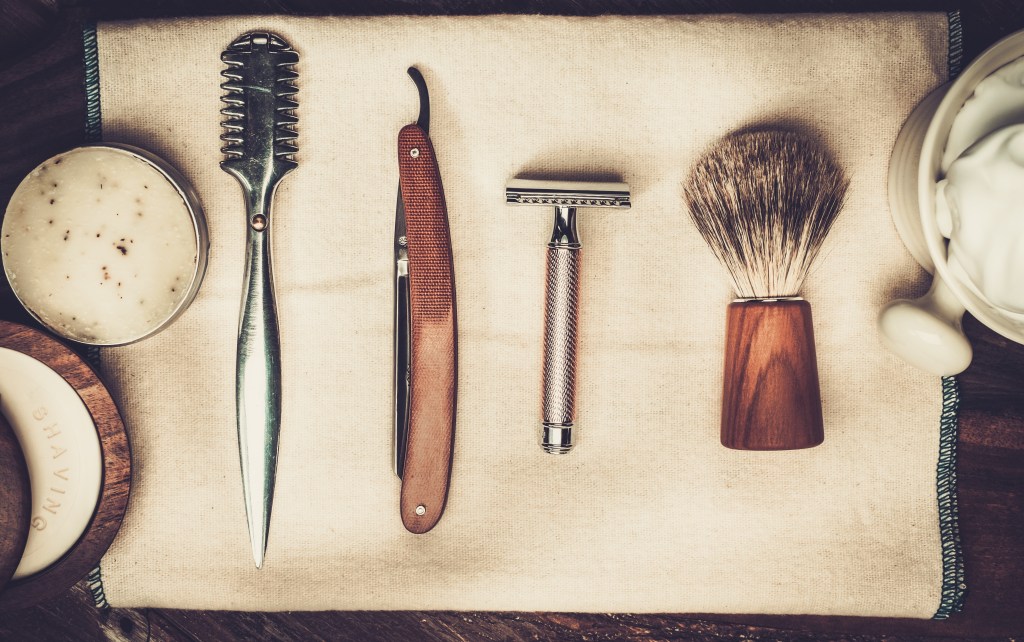 Whether traditional straight razor or shavette, “rust will be the biggest enemy to your razor,” Roi said. “They obviously get wet when we shave with them, so make sure afterward they are dry.” He explained further, “There can be a lot of moisture and bacteria in the bathroom, so don’t keep them on the bathroom sink with your toothbrushes. Anything that adds to the ritual can be nice, so maybe find a nice old cigar box or something to keep all your shaving tools in.”

As for sharpening, traditional straight razors do require sharpening/honing because the blades are thin and will lose their edge easily if not cared for properly.

If you’ve ever heard of a “strop,” this is where it comes into play. A strop is a long piece of leather used to hone the blade. “You want one that’s nice and thick because you’re going to hook one end on to something [like a hook on the wall] and pull the other end taught, then slide both sides of the blade flat across the stretched out leather. This should be done a couple of times before shaving,” Roi said. (Just think of any movie scene where a character gets a straight razor shave and you’ll see the barber run the razor across the strop a few times.)

Though you can pick up canvas strops, Roi recommends sticking with the classic leather since it’s a key symbol of barbering right up there with “the straight razor or the barber pole,” he said.

What about shavettes? Do I have to swap the blades? What kind of blades do I need?

Whatever you do, Roi said any would-be straight razor shavers should try a few different kinds to find one they like because “a good blade can make the difference between a clean or messy shave.”

Are there any risks to using a straight razor?

With something as sharp as a straight razor, the major risk is cutting yourself. Roi points out that you can cut yourself even before you start shaving if you’re not carefully swapping the blades on a shavette. To avoid cutting yourself, stick to the “how-to” instructions above as best as you can. When swapping blades, make the swap before lathering up and make sure your blade is locked in its place. Then “fold it closed to protect it, then lather up your face” to minimize the chance of accidents, Roi said.

For best results when you’re finished, be sure to splash some cold water on your face and hit it with a mild astringent, like an alum block, to keep bacteria at bay, Roi said.

And that’s just about everything a guy needs to know before wielding a straight razor. Roi also recommended softening up your skin with a hot towel or two, or by shaving after you get out of the shower. Finally, Roi said, “Have fun with it. Create the time to make a ritual out of it and feel how it affects the rest of your day.”

Now, without further ado, let’s check out some of the best straight razors and shavettes below.

1. The Art of Shaving Black 5/8″ Blade Round Straight Razor

Though you certainly don’t need to spend over $100 on a straight razor, if you want one of the best straight razors, The Art of Shaving Black 5/8″ Blade Round Straight Razor has everything you need.

It features a hollow ground blade, which leaves a super sharp, thin edge for precise, clean, close cuts. The blade itself is made of carbon steel, making it much easier to maintain and hone in the long term. The round-nose blade also helps minimize the risk of accidental nicks from the tip of the blade.

With regular stropping and proper maintenance, this straight razor could legit last you decades. 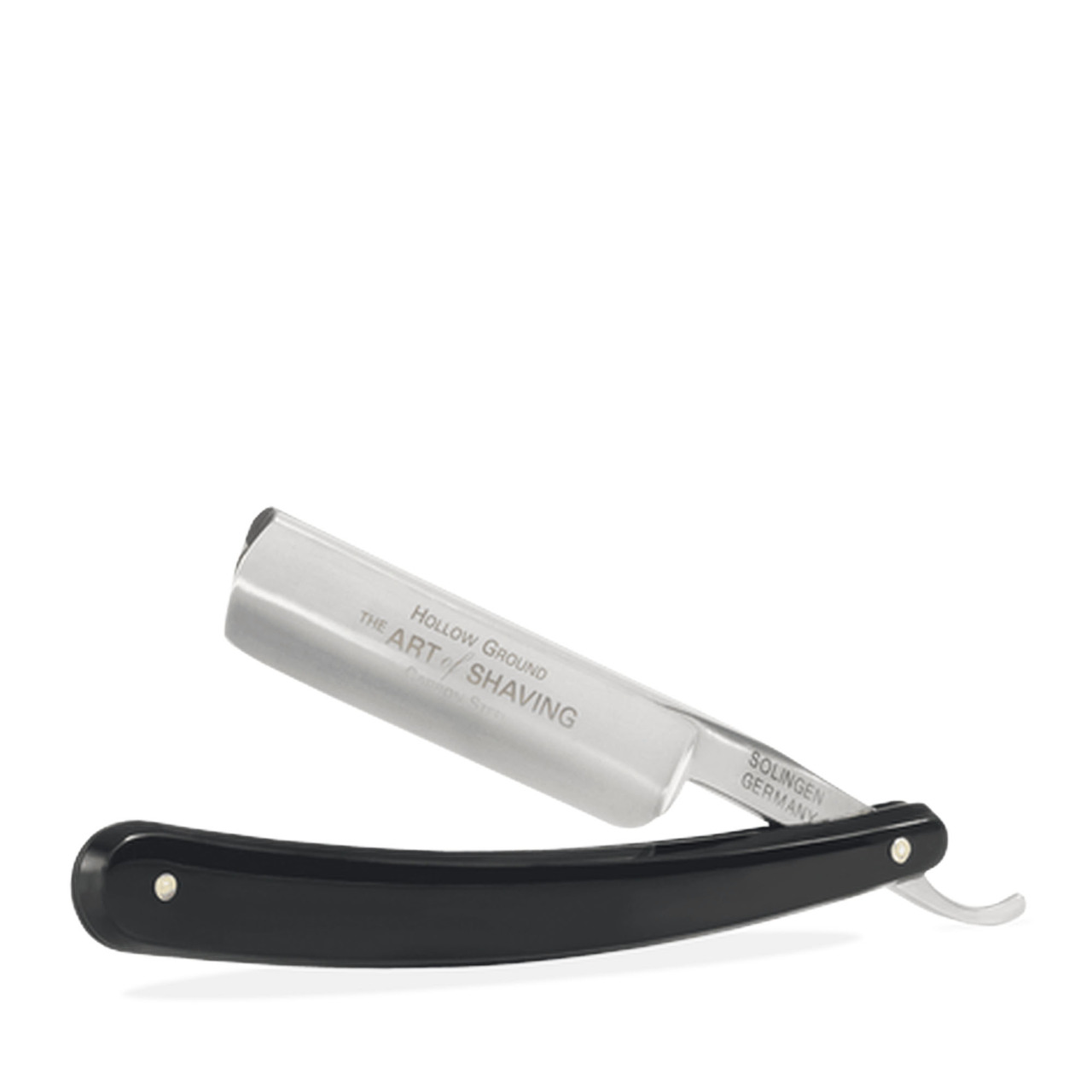 Courtesy of The Art of Shaving

The Art of Shaving Black 5/8 Blade Round Straight Razor

For more experienced shavers looking for a traditional straight razor, Roi suggested scoping out eBay for some vintage ones, saying they’re still likely to be usable. For everyone else, he mentioned Naked Armor as an up-and-coming brand that “offers beautiful higher-end straight razors.”

In particular, we were drawn to the beautiful Naked Armor King Arthur Gold Straight Razor. With a gold and ebony handle and a ready-to-shave stainless steel blade, this is likely to be a standout on your bathroom counter for years to come. The stainless steel blade should remain sharper for longer, but you’ll still want to strop semi-regularly to maintain the edge. And if you find you’re dealing with more than expected dullness, reach out to Naked Armor and they just might hone it for you. 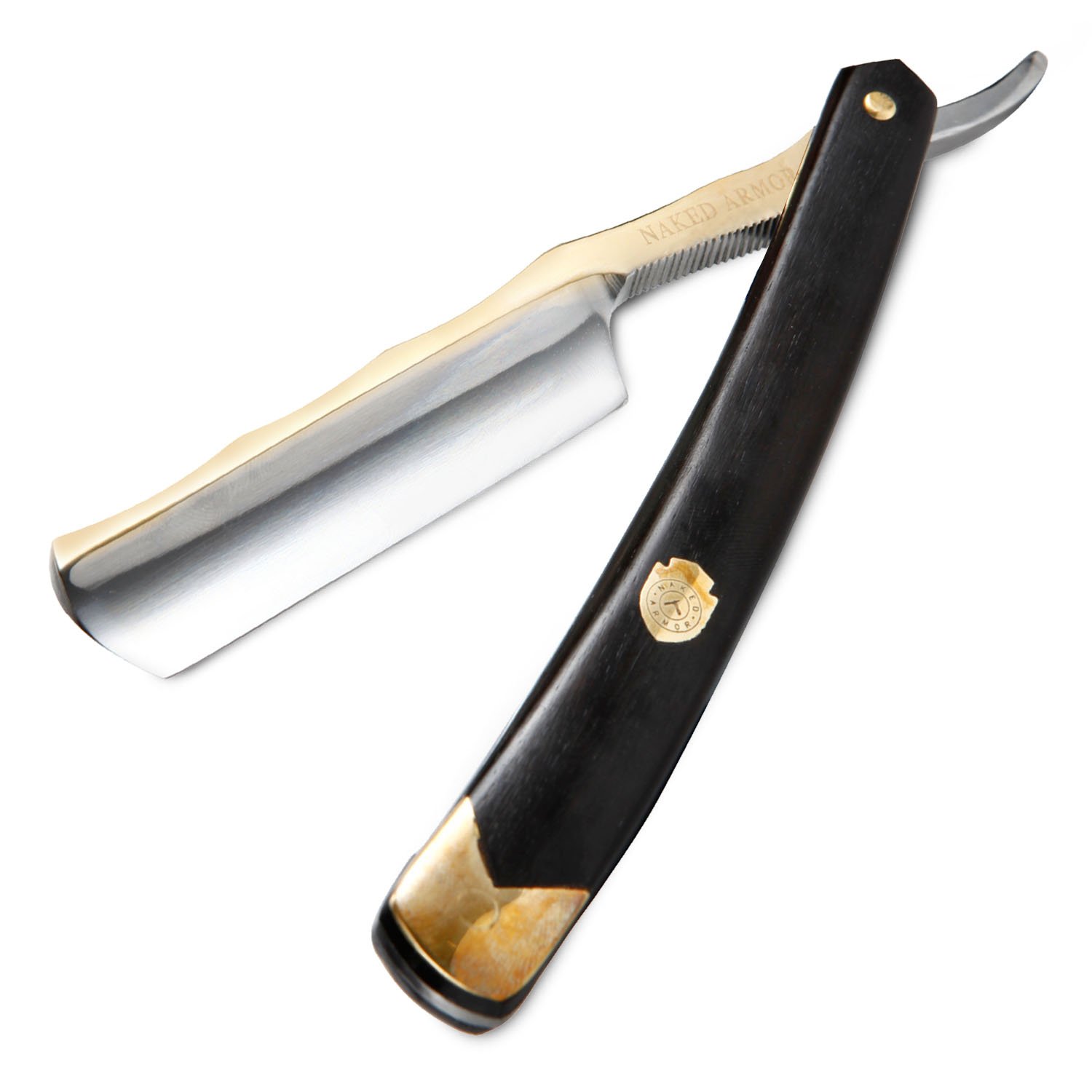 If there’s one straight razor brand likely to be found in every barbershop in the U.S. (or, honestly, around the globe), it’s Dovo. Dovo’s been consistently making some of the best straight razors for years now, and I can tell you from firsthand experience the Dovo Straight Razor Black works great. I stick to my safety razor for daily shaving, but I turn to my Dovo every once in a while.

The carbon steel blade is easy enough to hone with a strop and it’s pretty affordable too as far as the best straight razors go. 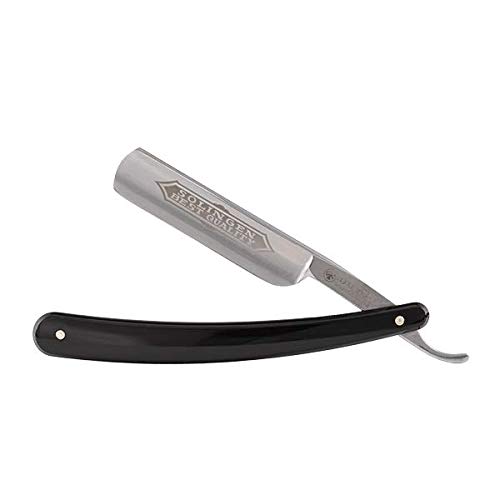 Though better-known brands offer nice shavettes, if you’re going the shavette route, you might want to start with something a bit more affordable to test the waters.

The Equinox Professional Straight Edge Razor Shavette not only delivers the straight razor experience, but it also comes with 100 single-edge Derby blades, one of the two brands Roi and team use at Fellow Barber. Sure, the stainless steel razor could be a little heavier, but it holds the blades well and offers incredible bang for your buck overall. 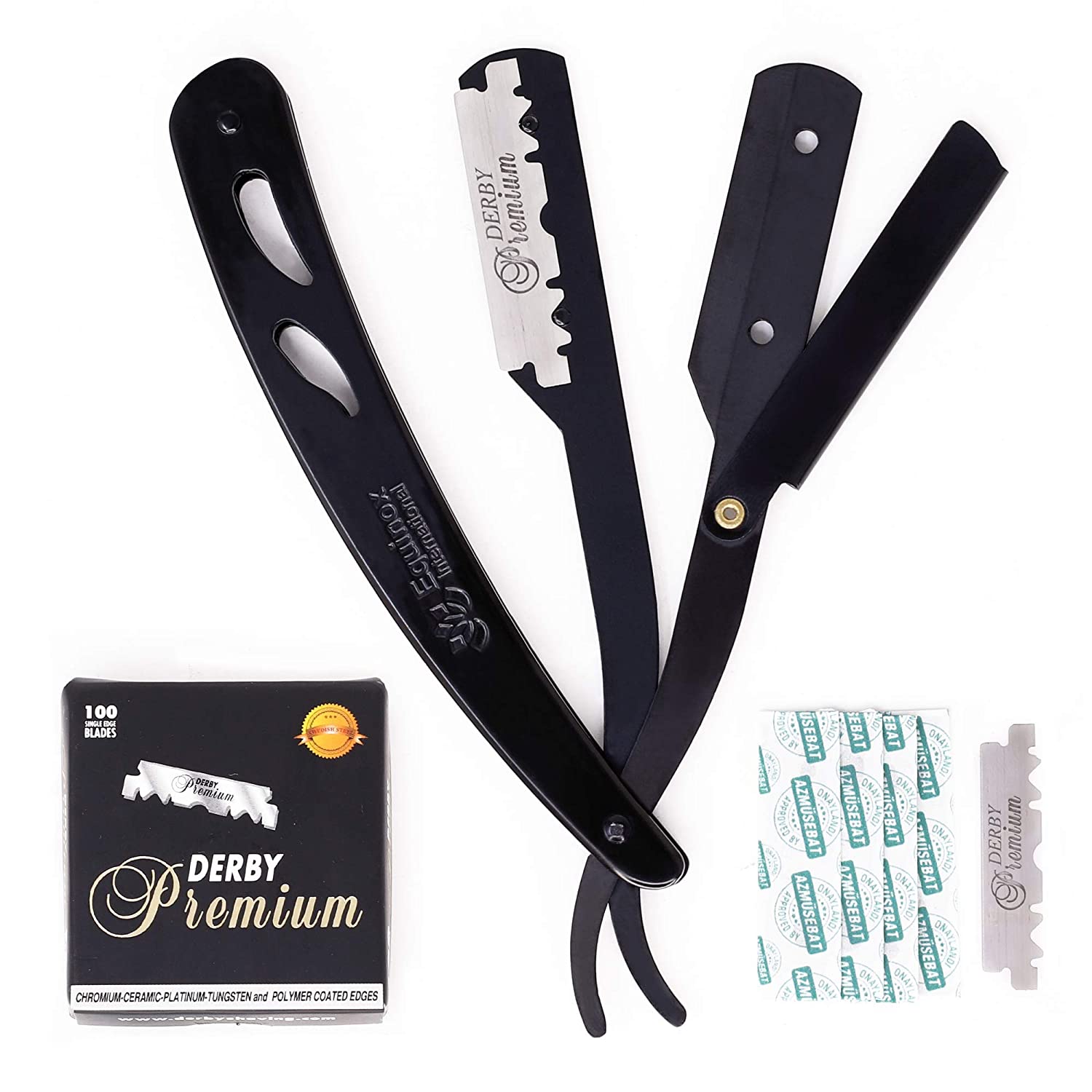 If you’re cool to spend a little more for a brand you might actually encounter in a barbershop, consider the Parker SRX Heavy Duty Straight Edge Razor Shavette.

This Parker shavette is made from a hefty stainless steel, features a rounded nose and a very secure clip/lock blade holder. Overall, it’s a high-quality razor that’ll give you the top-notch straight razor experience you want without breaking the bank. 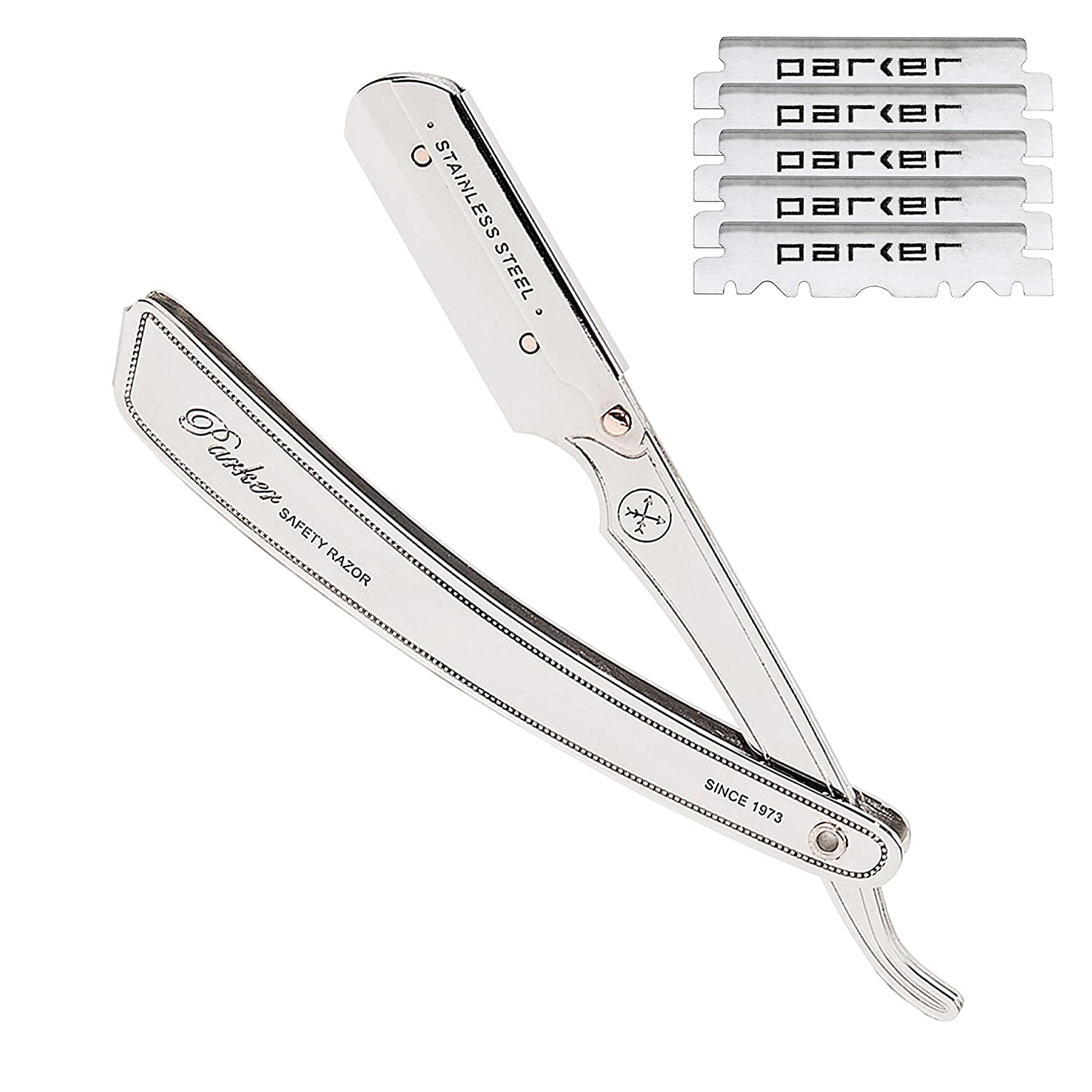 For everything you need, you might want to pick up a whole straight razor set, like the Gentleman Jon Straight Razor Shave Kit. It includes a straight razor shavette, a badger hair shave brush, an alum block, sandalwood shave soap, a stainless steel shave bowl and five double-edge razor blades, which will give you 10 single-edge blades after splitting. It’s legit an old-school shave in a box, so if you want to shave like your grandfather or great grandfather did with minimal effort, this box has everything you need. 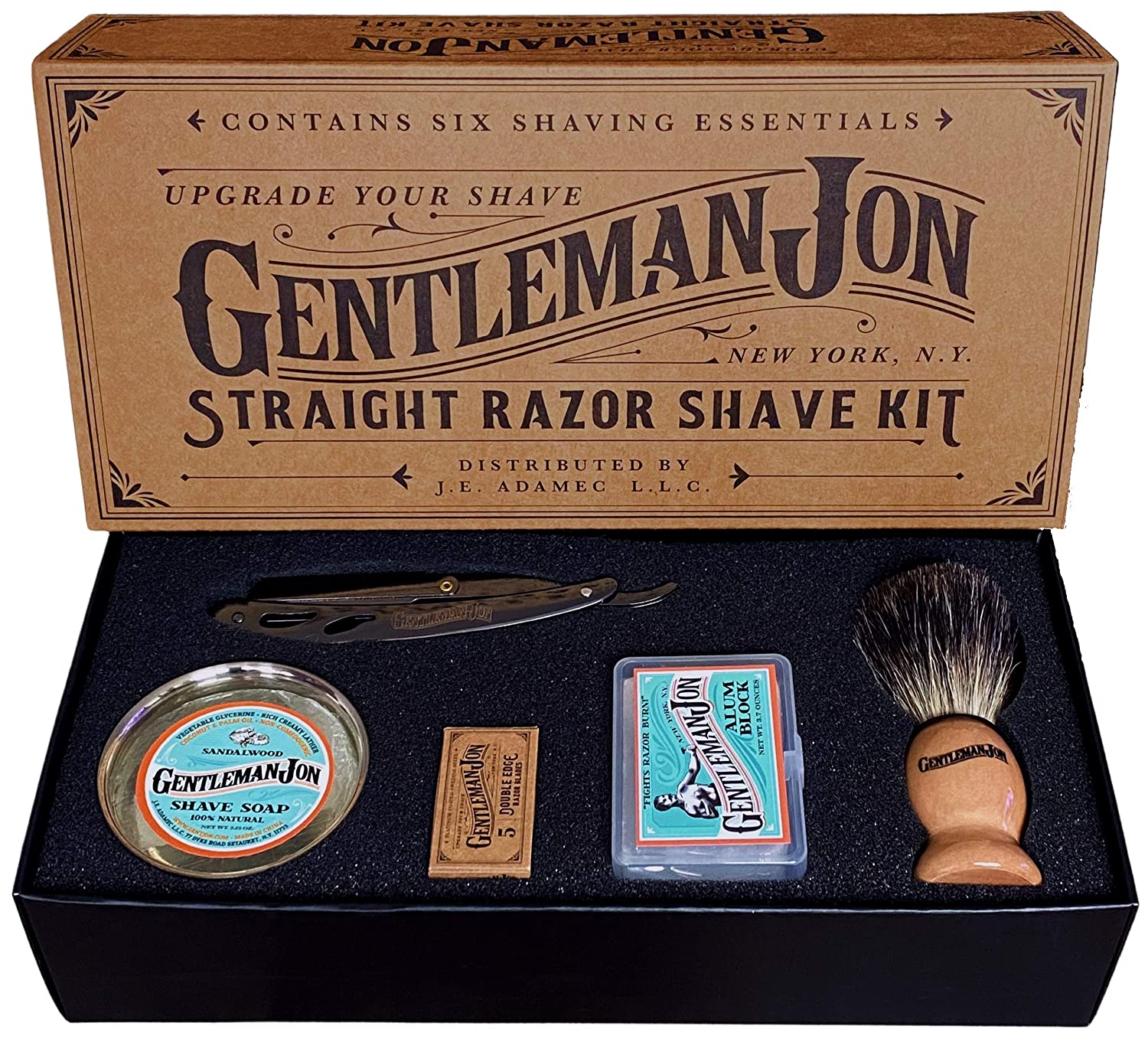 For shavettes, you’re going to need fresh blades on the regular. Roi said Fellow Barber typically uses Derby blades or Astra blades. We’ve used both before and can attest to their quality and friendliness to beginners and pros alike. 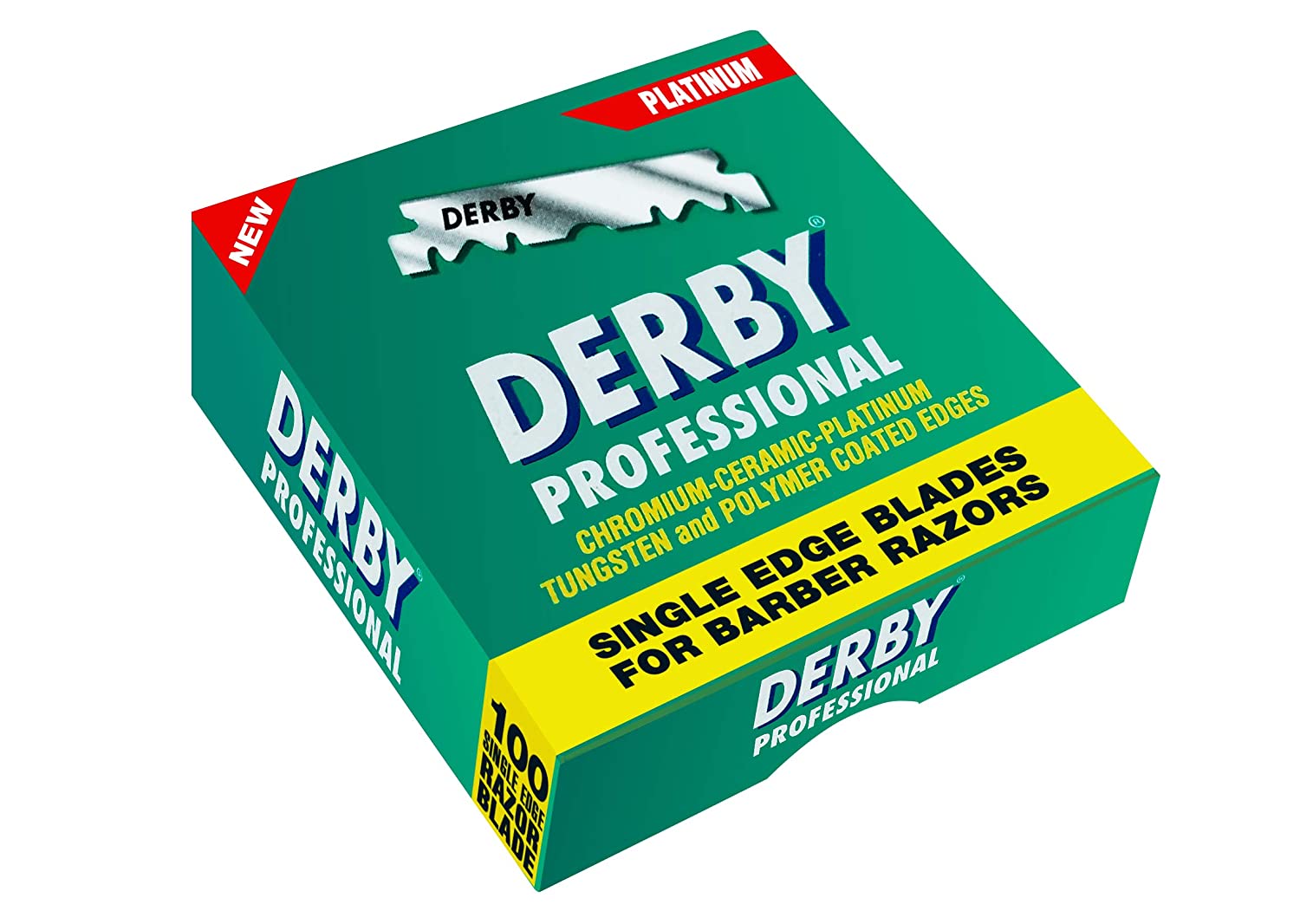 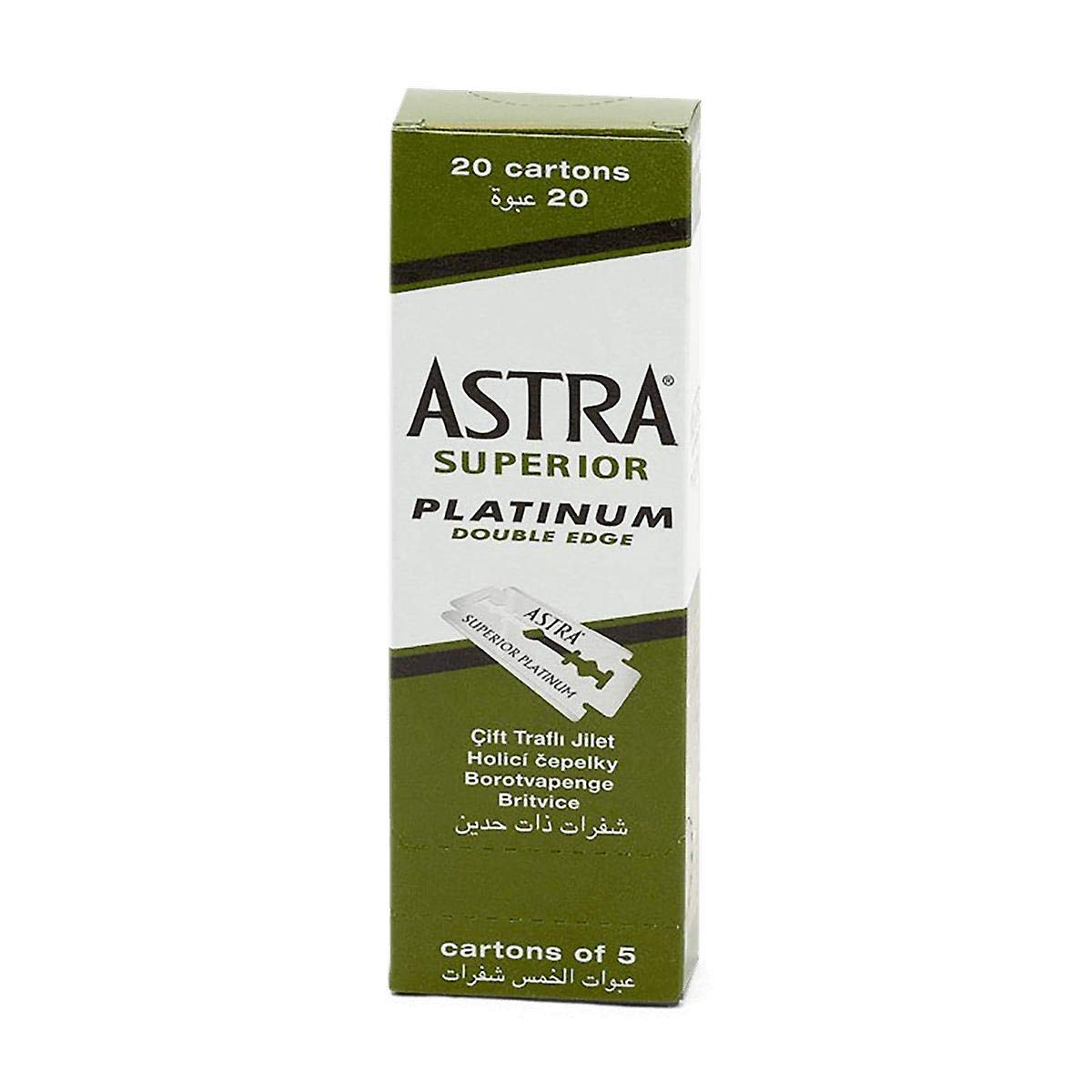 Though there’s something to be said for the classic leather strop, we find the Hutsuls Double-Sided Strop Paddle a lot easier to use. Because it’s a paddle, you don’t have to hang it up to strop your razor. It’s a small convenience but a significant one if you don’t have anything to hook a traditional strop to in your bathroom. Plus, the paddle has leather strops on both sides, so it’s comparable to traditional leather strops too and will deliver the same honing your straight razor needs to keep on shaving. 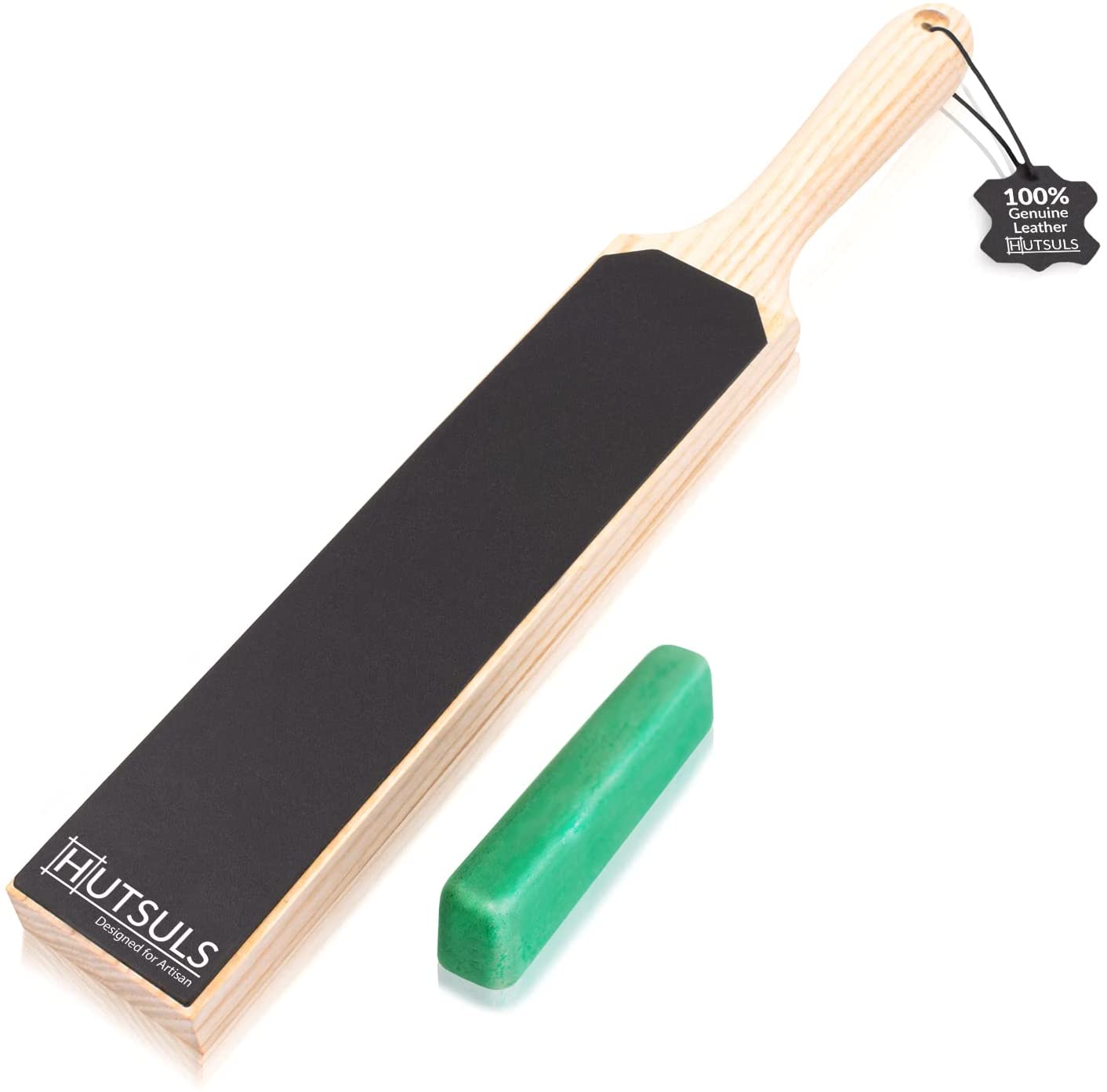 These Razors Will Work For Even the Most Sensitive Skin