If you’ve been known to get your sweat on, then you’re familiar with the best men’s antiperspirant deodorants. While deodorants cover up the body odor produced from sweating, antiperspirants actively block sweat ducts. Antiperspirants also typically help mask the smell, but they use specific ingredients to prevent sweat, which of course contributes to body odor.

In the United States, aluminum is the only ingredient approved by the US Food and Drug Administration to block sweating, so if you’re buying an antiperspirant, it’s going to have aluminum-based ingredients. That’s the key, and really the only, difference between deodorants and antiperspirant deodorants. Both products generally use fragrances to help with body odor, but only one actually works to prevent odor in the first place by blocking sweating.

To help you get some of that sweet sweat-blocking action, we’ve rounded up some of the best men’s antiperspirant deodorants for your perusal. For this round-up, we’re focused on solid, stick and roll-on antiperspirants. If you’re into spray deodorants, we’ve got a whole separate round-up of the best spray-on deodorants. As a heads up, we’ve included one aluminum-free deodorant for those sensitive to metals on their skin, but remember, while it’ll help to cover body odor with scent, it won’t block sweating and isn’t a true antiperspirant.

When it comes to men’s hygiene products, Dove Men+Care has emerged as one of the best brands across all of its products. Dove Men+Care Antiperspirant Deodorant is definitely one of the best men’s antiperspirant deodorants for a few reasons. For starters, it’s not very expensive, which is a win for wallets everywhere. Perhaps more importantly, it’s designed specifically for men and includes 1/4 moisturizer in its formula, so dryness from sweat doesn’t cross the line into dry skin. Lastly, it’s got a nice, clean subtle masculine scent so your armpits will smell as fresh as they feel and stay dry all day. Truly, you can’t go wrong with this stick deodorant and will never regret using it. 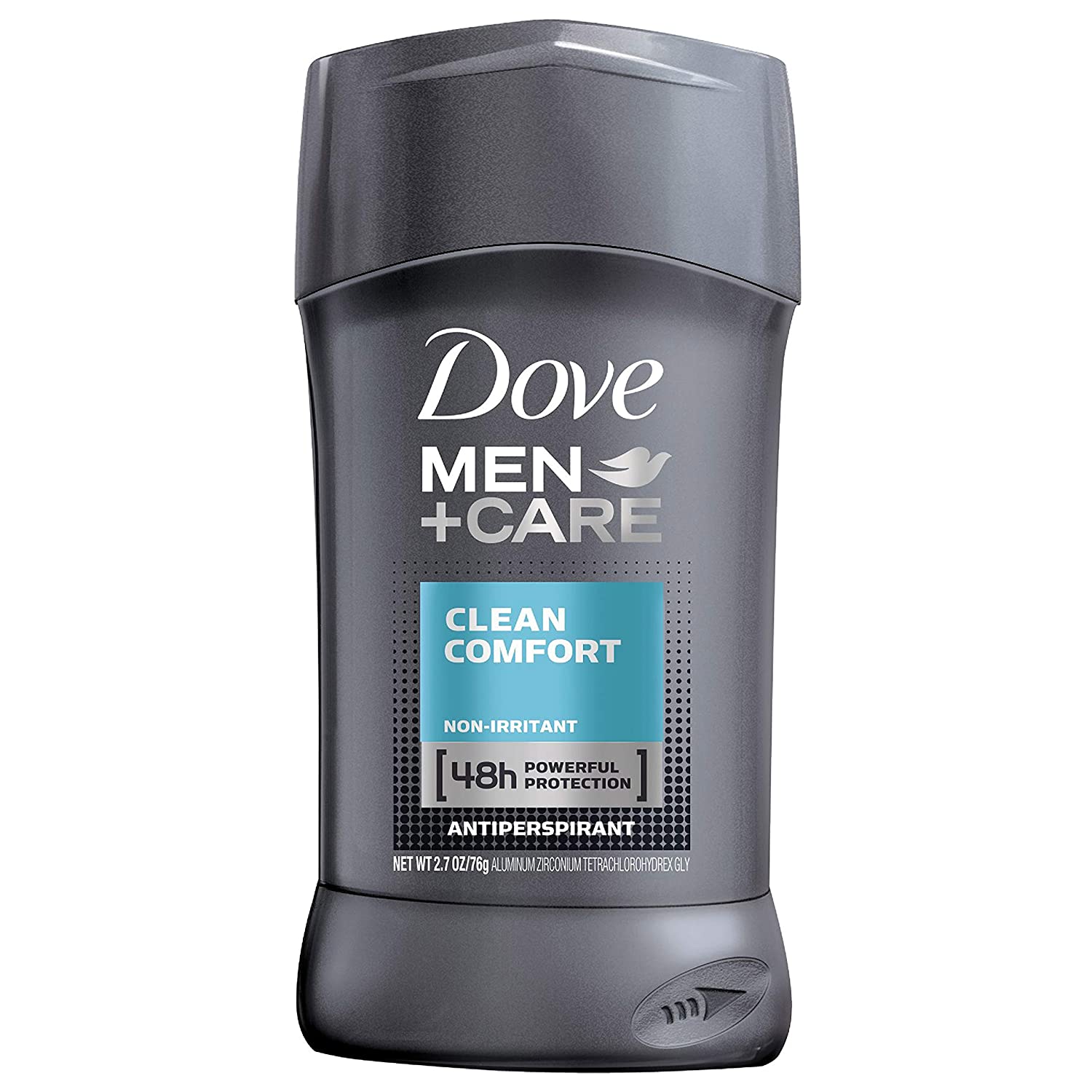 Mitchum Antiperspirant Deodorant is one of the most popular and best-reviewed deodorants on Amazon for good reason. It’s just an all-around great antiperspirant. It goes on invisible, so it leaves a lot less white residue on your skin and clothes. Staying true to its former longtime slogan, “so effective you can skip a day,” Mitchum’s Triple Odor Defense technology offers 48 hours of clinical-strength level protection at regular antiperspirant prices. This antiperspirant also incorporates aloe vera and vitamin E into its formula, so you get the dryness from sweat you want while maintaining your skin’s natural moisture. 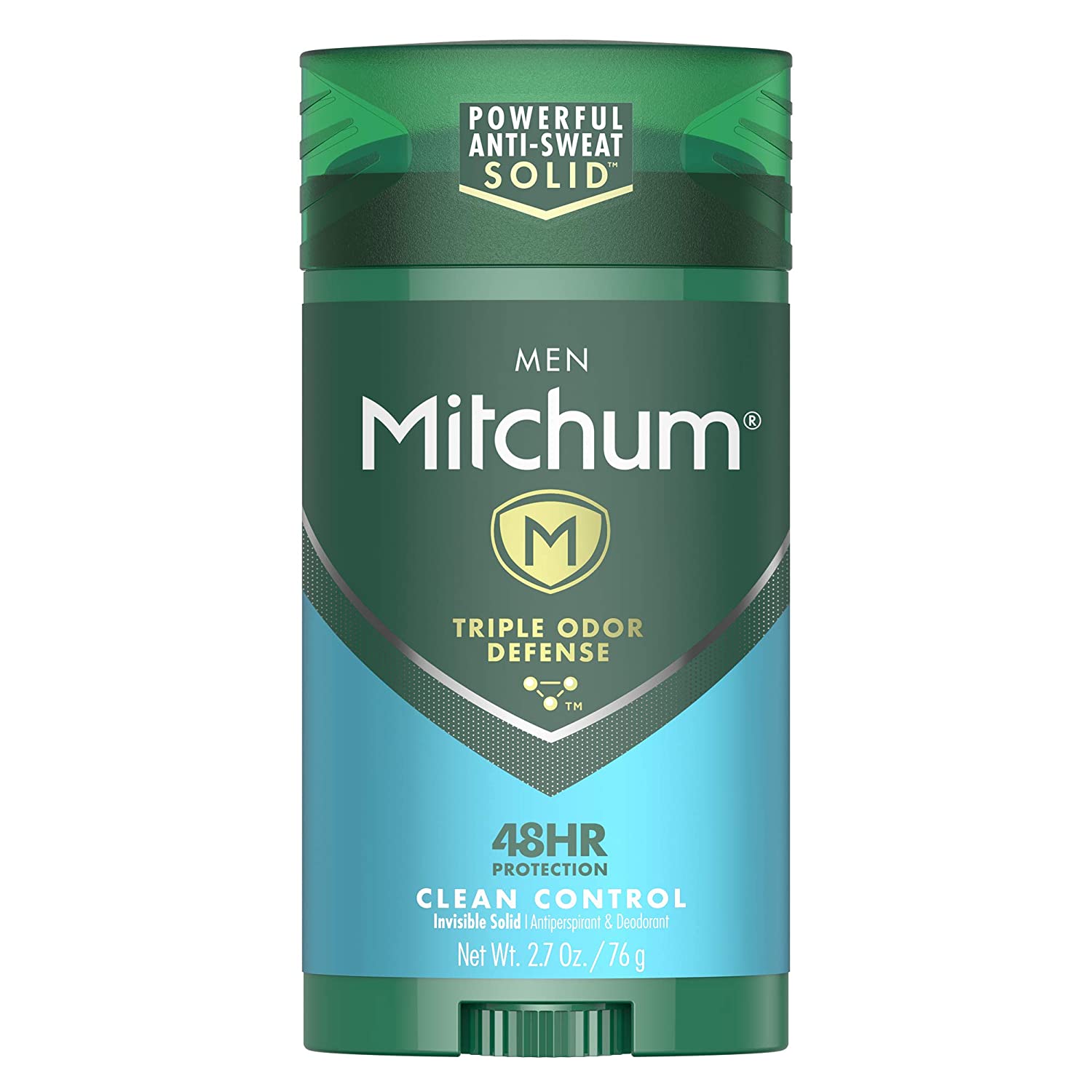 What can we say about Old Spice that you don’t already know? Old Spice has been making men smell great with its spice-inspired scent since the 1930s. That’s the brand’s claim to fame, and it’s been making all kinds of great-smelling products ever since. Of course, with Old Spice High Endurance Antiperspirant & Deodorant, not only will you smell great, but you’ll get the sweat prevention that’s so key to continuing to smell great throughout the day. 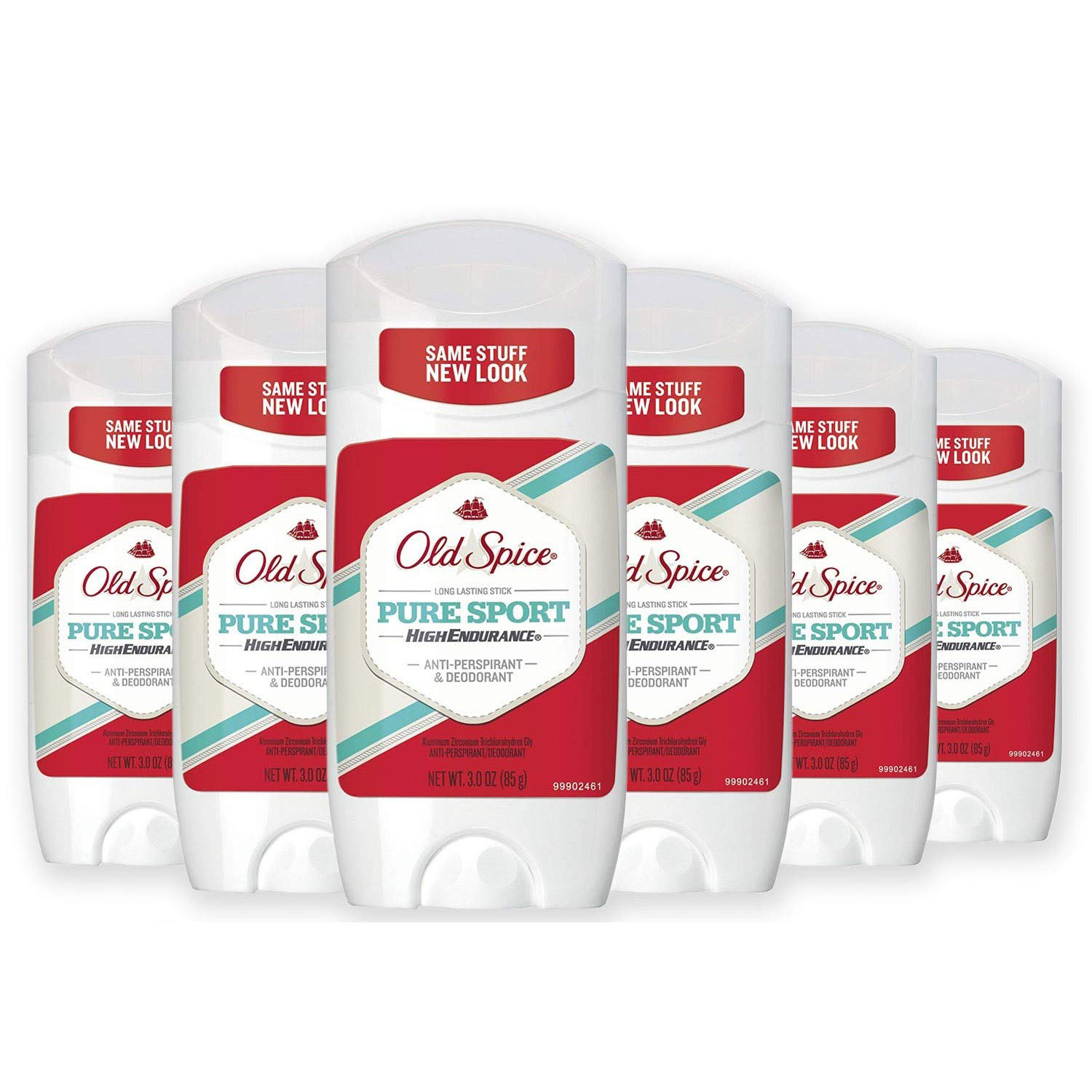 Oftentimes, grooming and hygiene products use a cornucopia of ingredients to achieve desired effects. While that’s typically a good thing — we want products to do what they claim to do after all — the more chemicals and ingredients in a product, the more likely you are to encounter something that irritates your skin. 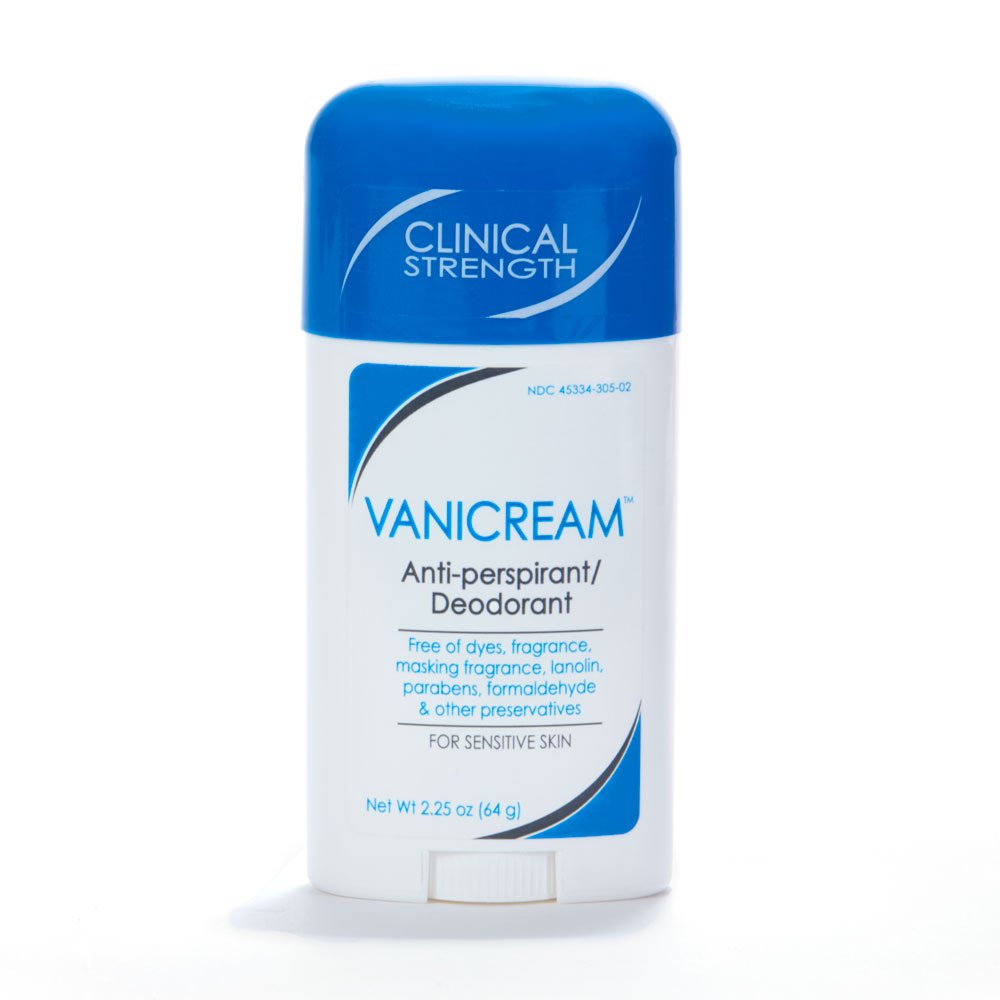 If you’ve been a heavy sweater your whole life, prepare to meet your lifesaver. Certain Dri Prescription Strength Clinical Antiperspirant was designed specifically to fight hyperhidrosis, otherwise known as excessive sweating. Though this antiperspirant uses less aluminum as a percent than other competing antiperspirants, it specifically uses aluminum chloride, which has one of the smallest aluminum-based molecules. How does that help us heavy sweaters, you ask? Because the molecule is so small, it can more easily get into sweat ducts to form an effective block, which means less aluminum ultimately does more work to prevent sweating and help keep you feeling fresh and dry and smelling great. 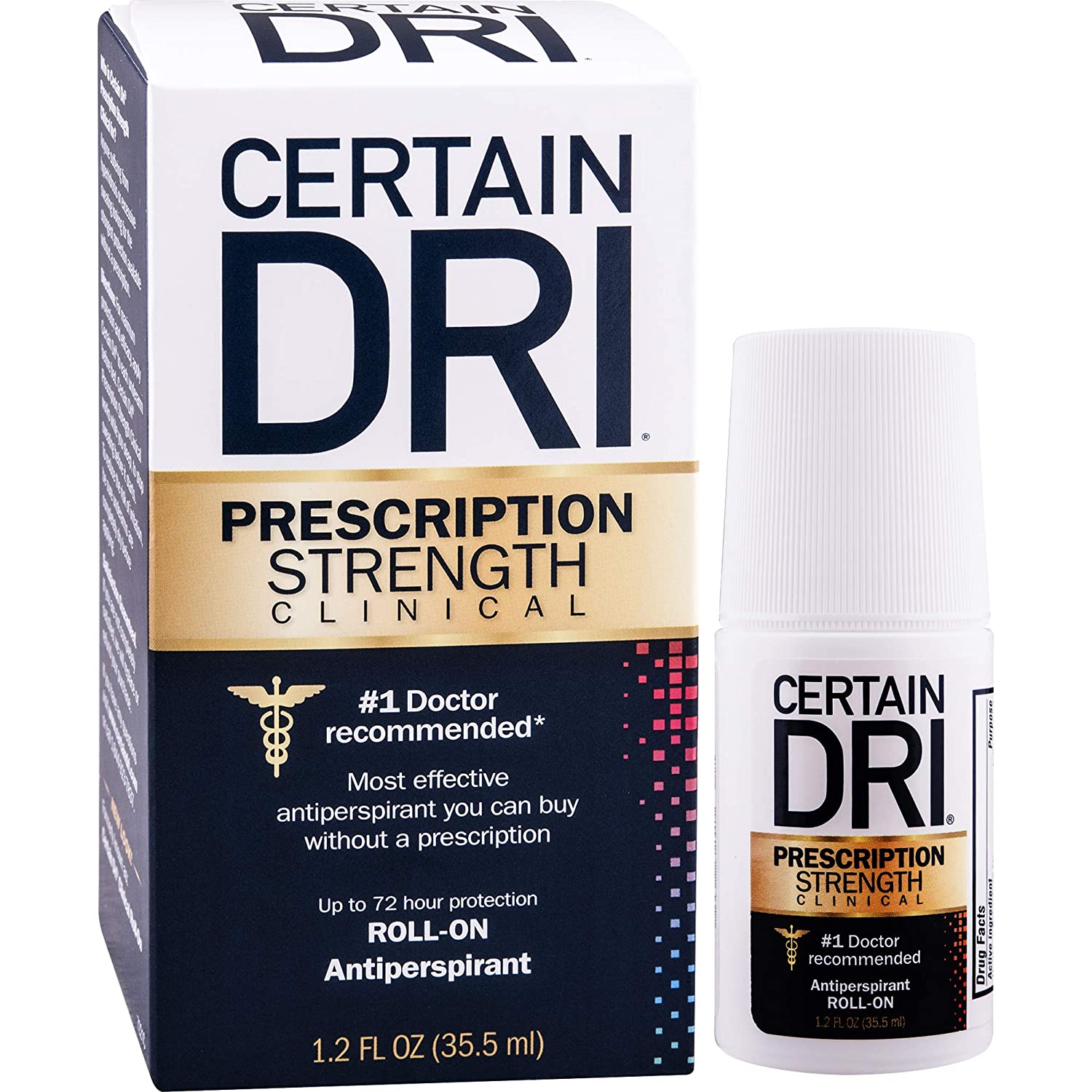 As we mentioned at the top, there’s basically no such thing as an aluminum-free antiperspirant. Nothing natural has been found that blocks sweat to the degree aluminum does. Nonetheless, aluminum does contribute to yellow marks and can irritate skin, so consumers have sought out more natural options to tame their body odor. That’s where Native Natural Deodorant comes in. It’s light, feels fresh and helps fight odor through baking soda and tapioca starch. In addition to lacking aluminum, this formula is also made without parabens, phthalates, sulfates and talc.

And as we just alluded, because this deodorant doesn’t contain aluminum, it’s also a lot less likely to create yellow stains over time. Though it’s made for women and men, there’s not a huge difference between men’s and women’s deodorants at the chemical level. The only real difference comes down to scent profiles, and Native makes an awesome Citrus & Herbal Musk scent that smells a bit more masculine. But if you’re open to less traditionally masculine fragrance profiles, Native also offers great natural deodorants with coconut and vanilla, eucalyptus and mint, sweet almond & honey and more as well as an unscented version. The only downside to this deodorant is it’s a bit on the expensive side for stick deodorants. It smells and works well, but it can be hard to justify spending more than $10 when you can do well for less than $3. 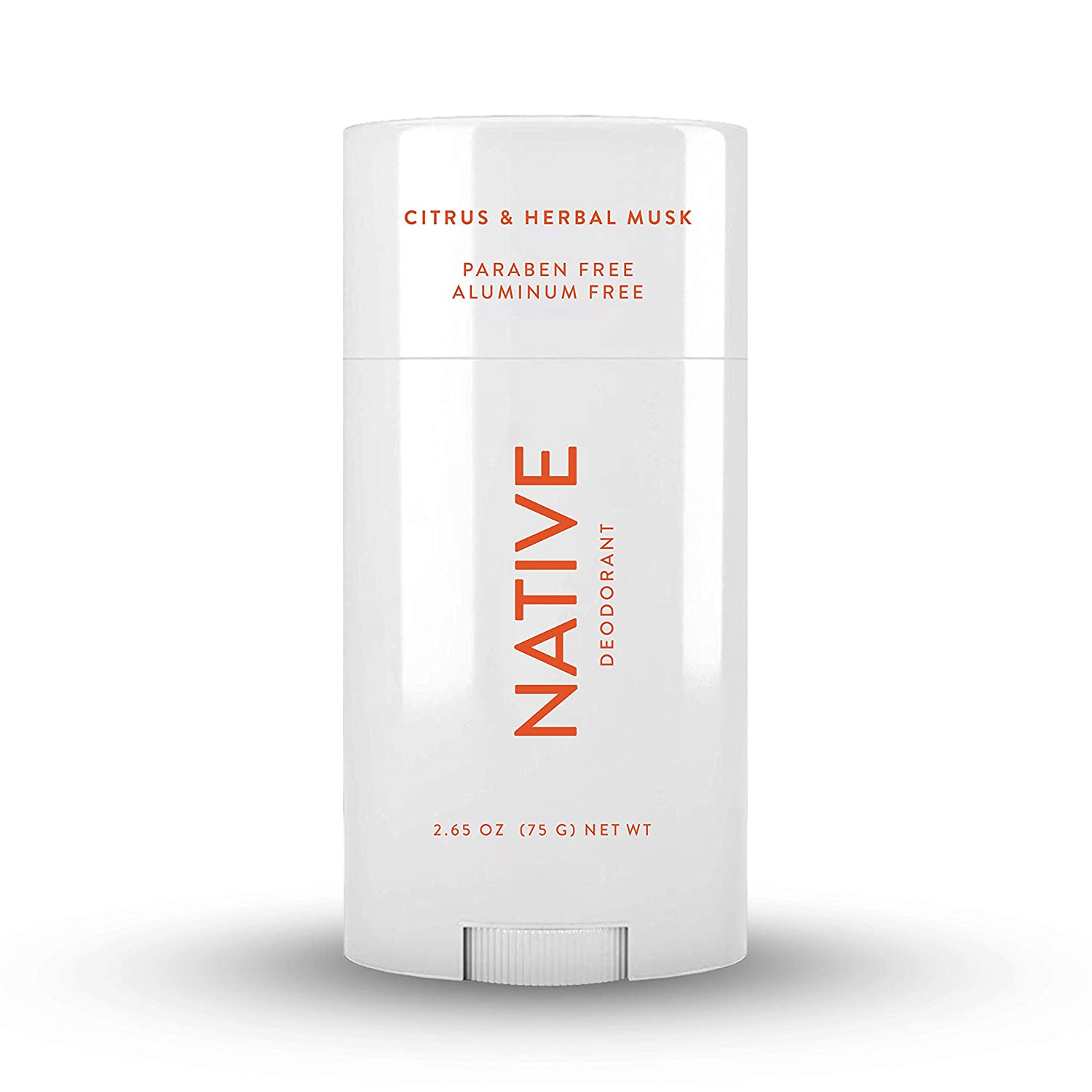 What Arm & Hammer began with baking soda and washing soda has expanded into all kinds of hygiene and odor-fighting products. In addition to its baking soda seen deodorizing refrigerators across the world, Arm & Hammer makes toothpaste, laundry detergent, cat litter and of course antiperspirant deodorants.

You know you can trust Arm & Hammer Ultramax Unscented Antiperspirant Deodorant because you already know that baking soda works to fight odors. Combine the deodorizing power of baking soda with the sweat-blocking and moisture-absorbing power of aluminium zirconium tetrachlorohydrex gly and you’ve got one powerful underarm odor solution, without any extra fragrance that might ultimately mix with your odor for the worse. If you’re looking for an anti-sweat unscented solution, this Arm & Hammer stick is the best men’s antiperspirant deodorant for you. 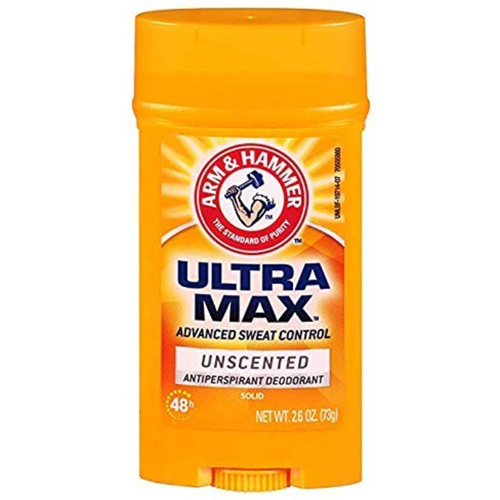 This deodorant stick was designed with athletes in mind but will work for anyone looking for a solid antiperspirant deodorant. It’s a white, solid deodorant that goes on clear, and offers long-lasting antiperspirant protection. It’s made with unique ingredients that set it apart from other deodorants — matcha and arrowroot provide natural benefits, and the scent is infused with vanilla and cedar for a crisp and clean feeling. It’s pH-balanced for comfort and health, and there are no parabens or talc. 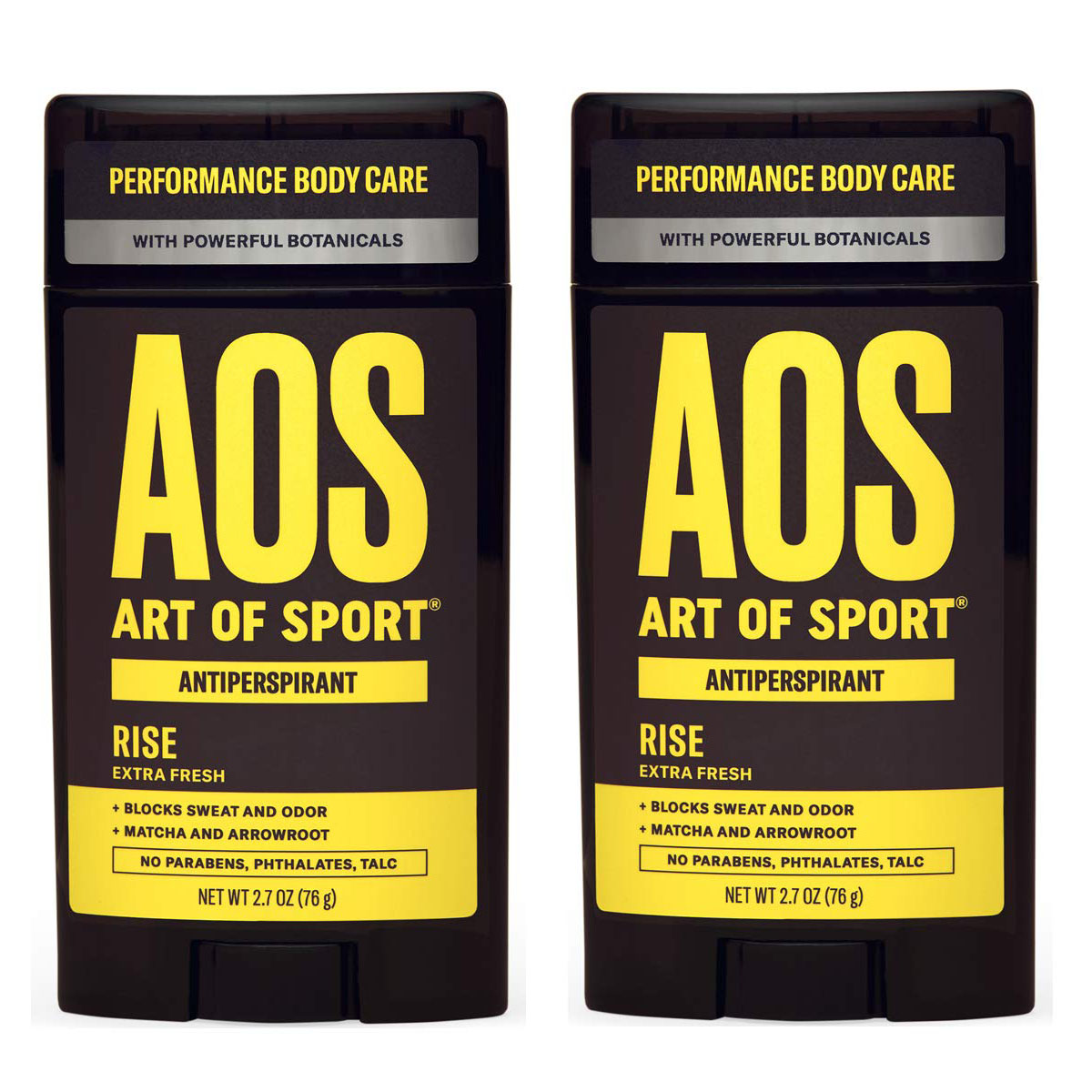 Jack Black is known for making elevated grooming essentials with a keen eye for natural ingredients and classic, masculine fragrances. This deodorant from the brand features vitamin E and aloe-leaf extract to protect sensitive skin. It comes in a roller stick form and is designed to not leave residue on clothing. Jack Black’s products are also paraben-free, cruelty-free, and made in the US.

Like the Native Natural pick above, this option is far from cheap. In fact, one stick will set you back $16 before tax. When it comes to deodorant, that’s certainly a lot. However, if you (like so many others) are a fan of Jack Black’s scents, then this option is very much worth at least a try. 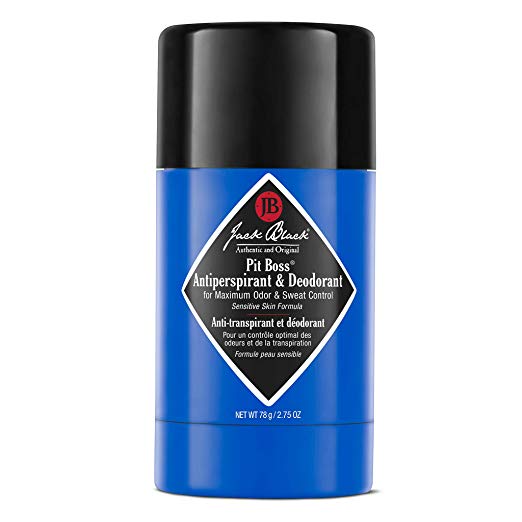 BEST FOR BLACK AND WHITE TEES

Keep getting stains on your shirts? We know that issue way too well. Lucky for you, Degree Men UltraClear Antiperspirant Deodorant goes on totally clear to rid of any stains you might get on your shirts over time. It uses aluminum to fight yellow stains from occurring, so you’ll never see an unwanted, frustratingly ugly pit stain on your shirt ever again. If you find yourself throwing your shirts out or cutting the sleeves off time and time again, what are you waiting for? It’s time to get Degree. 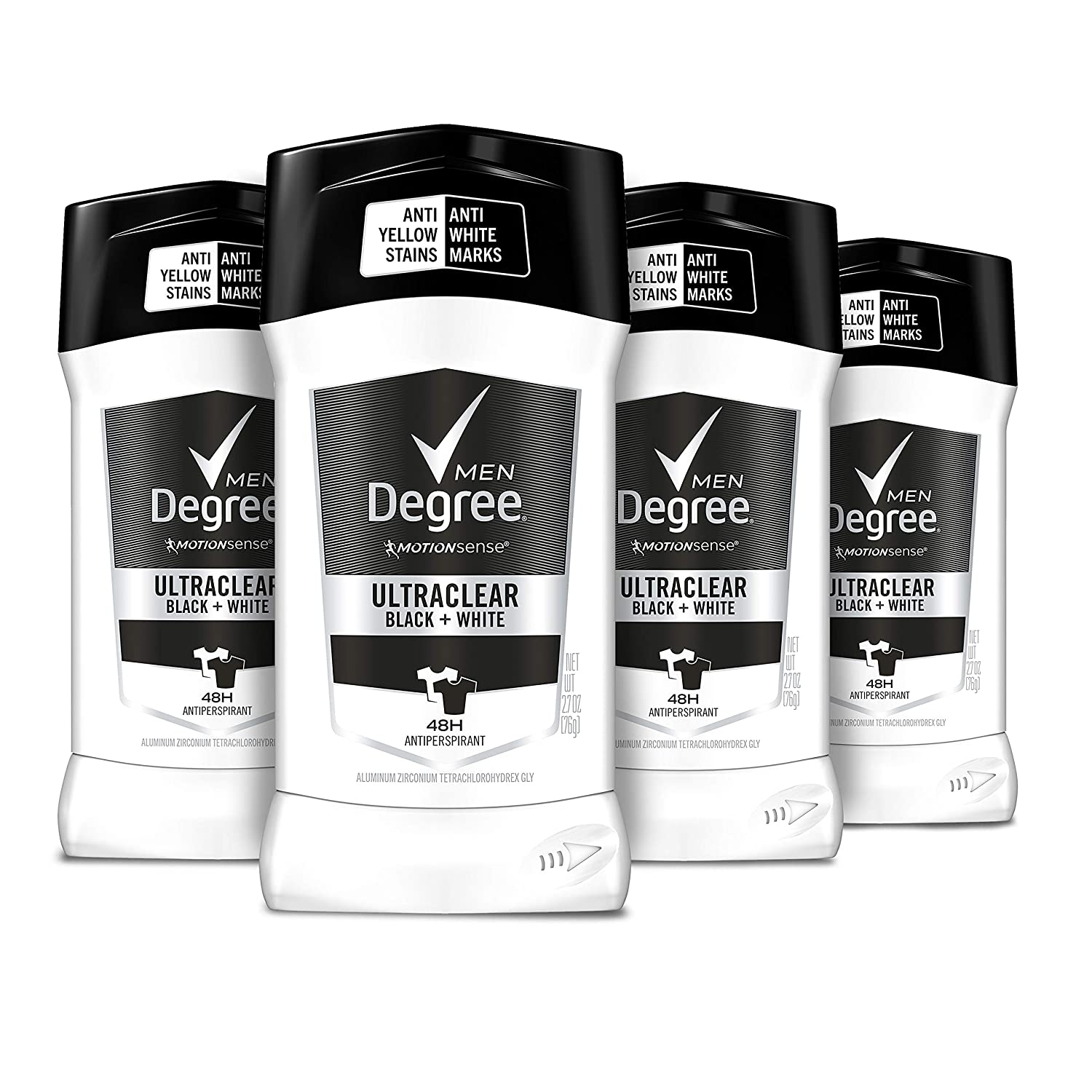 When it comes to deodorants and antiperspirants, we all tend to think of sticks and sprays. But that doesn’t mean other, equally good solutions don’t exist. One of the better and more travel-friendly alternatives out there will surprise you and frustrate you that you didn’t think of it first: antiperspirant wipes. SweatBlock Clinical Strength Antiperspirant Wipes do everything a great antiperspirant deodorant does, with a light clove-like scent that quickly wears off. Like our pick for heavy sweaters, these wipes were designed for hyperhidrosis and use aluminum chloride to deeply penetrate and block sweat ducts, making these wipes as effective as any other antiperspirant options.

For best results, SweatBlock recommends applying before bed. To avoid irritation, you should wipe, not rub, and let the antiperspirant air dry for five minutes. If you do this correctly, you could go as long as seven days (!) without sweating. With a reward that big, the risk of trying something a little different is worth it. And if you’re concerned about trying something a bit different, SweatBlock has got you covered through with what it calls the Dry Shirt Guarantee. If you experience too much sweat and aren’t pleased with the product, they’ll give you your money back, simple as that.

Gillette is known for its tagline “the best a man can get.” After over 100 years, the brand still produces some of the best shave and grooming products. This three-pack of antiperspirant deodorant from Gillette comes in a gel form, which can go on more clearly than stick deodorant. This one made with aloe is long-lasting without being overpowering and fights odor-causing bacteria. The only real downside of this pick is that it’s a little too easy to overdo it when cranking out the gel. So unless you’re careful, be prepared for more deodorant than you need. But then again, nothing wrong with smelling extra nice, right? 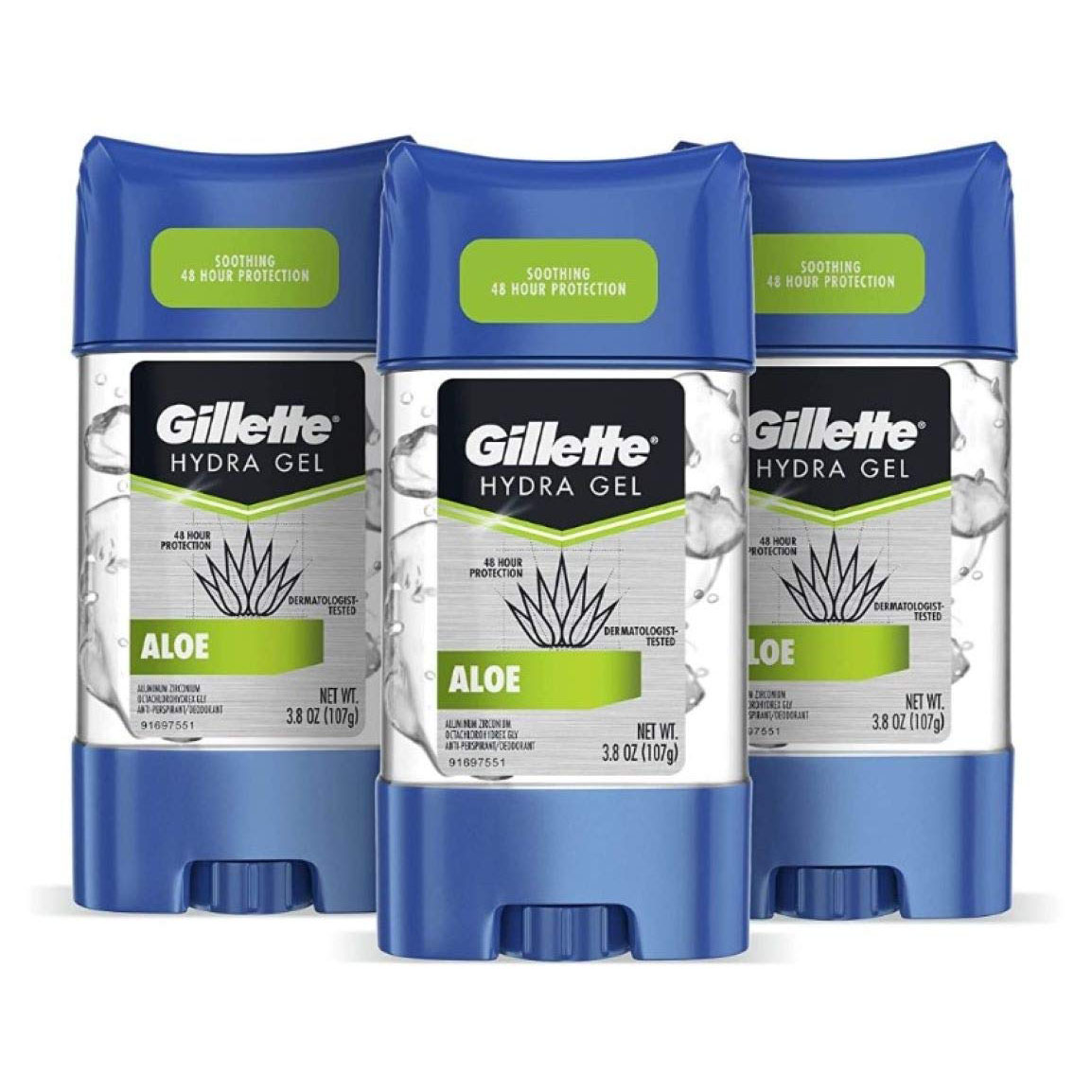 Yup, you got us. This is the exact same deodorant we picked as the best in spot one but in spray form. As mentioned, Dove is one of the best hygiene brands for men and women alike. If you’re the type that prefers a quick antiperspirant spray rather than a roll-on, might as well pick the best from the best to do so. This pack contains six sprays at only $18, making it an affordable option dudes can simply spray on when getting ready for the day. Plus, it smells awesome. 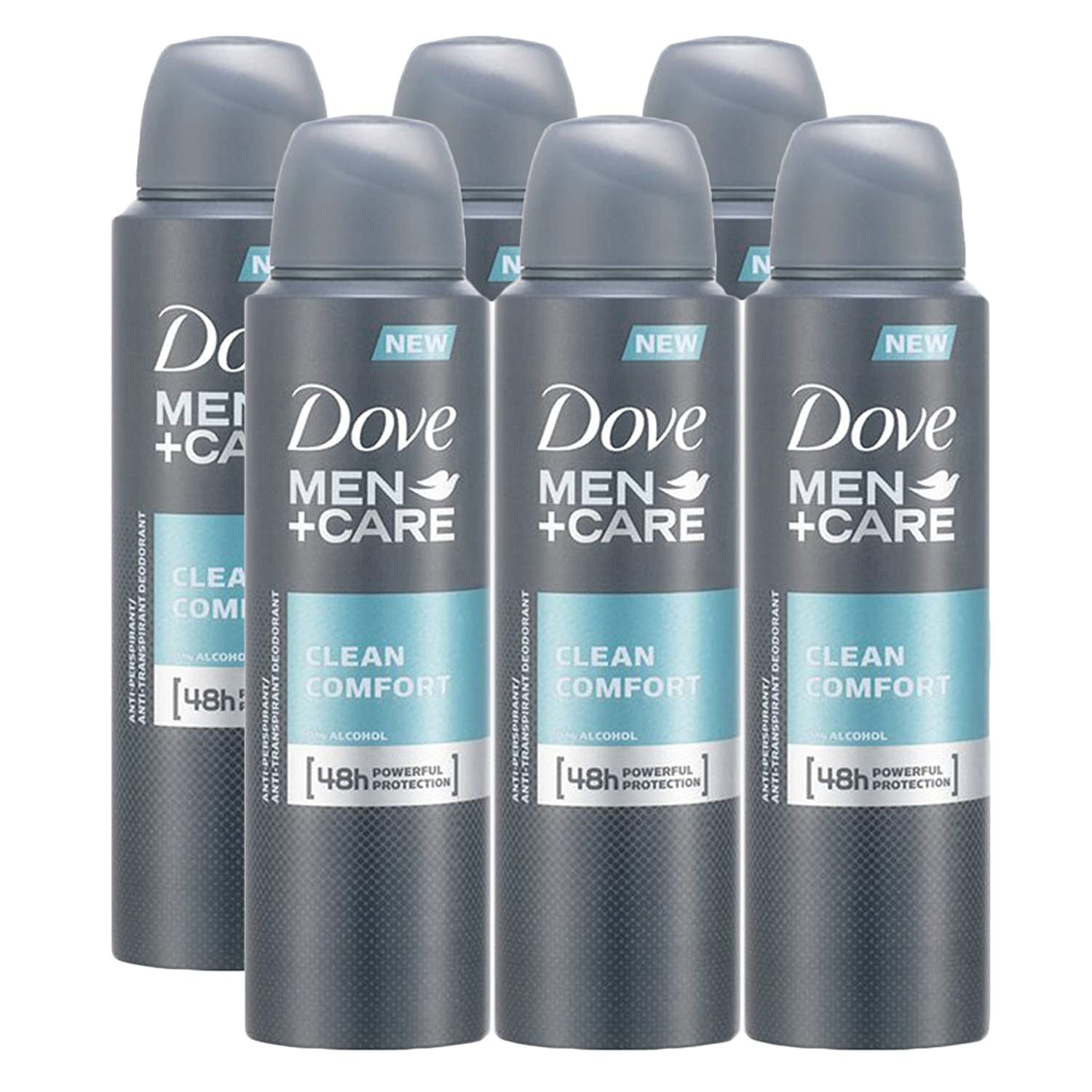