Growing up in a small Italian-American town in northern New Jersey, being tan was kind of a must. I can’t even count on two hands how many tanning salons exist in a three-mile radius from the house I grew up in. Throughout high school, I’d constantly go to tanning salons with my friends, in which the second we walked in, the workers behind the desk would recognize my friends and know which beds they wanted. My own mother would go three times a week because she equated her paleness to “looking ugly.” Before prom, girls would get the most orange spray tan they could possibly get and unintentionally stain their dresses in the process.

The best part of all? I am literally from the same town as the infamous “Tan Mom” Patricia Kretcil who made news back in 2012 when she was accused of bringing her 5-year-old daughter into a tanning bed. She didn’t do it, and quite honestly she’s kind of iconic, but you get the gist at this point. Being tan was key to my existence throughout my formative years.

Although I’ve been to tanning salons thousands of times, I’ve never actually sat in a bed. I always preferred getting my tan the old-fashioned way by laying out in the sun each summer. I’d spend winters looking “ghostly,” as my mother would say, but I lived.

It wasn’t until these past couple of months in quarantine when I felt my palest that I knew it was time to change something out of boredom and sheer curiosity. I was going to self-tan.

All self-tans I’ve seen cladding friends’ bodies in the past never looked natural to me, so I’ve always been skeptical to try it myself. But, I figured if I were ever going to do it, might as well when I don’t have to leave the house at all. So, I was able to get a bottle of Blue Saint’s zero-orange guaranteed self-tanner (which Blue Saint was nice enough to send me for review) and lather on up.

Although, when reading “zero-orange,” did I believe them? Absolutely not. 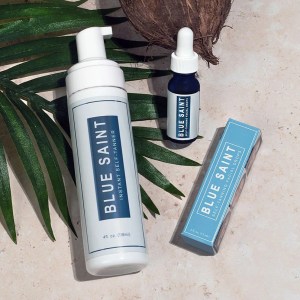 The application process was simple. I undressed in my bathroom, slathered the stuff all over my body, missed a couple of spots on my back because I am not flexible and waited.

It wasn’t until I was about to take a shower just a few hours later that I realized you’re supposed to sleep with Blue Saint’s self-tanner on. I tend to, like, not read things before I do it, but this was a time in which I realized I absolutely should have — because I was not entering my clean bed covered in self-tanner.

I looked good at this point and I was worried that all of my hours of hard work and sitting around doing nothing would go to waste, but I had to jump in the shower regardless. There wasn’t a question about it. So, I did.

As I began washing, I noticed some of the tan coming off, but I was surprised to see how much stayed on in such a little amount of time. I left the shower with actual tan lines around where I kept my underwear on. I was ultimately only two or three shades darker, but I was happy with what I looked like. 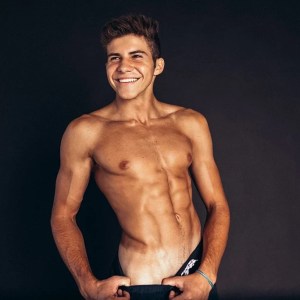 The tan lasted around a week and a half, but I’m sure it would have lasted longer if I had decided to sleep with the self-tanner on. But, that’s never going to happen, so I think next time I apply, I’ll do it in the morning and go throughout my day wearing the self-tanner so I can wash it off before bed.

All in all: do I suggest you self-tan this winter? Honestly, I’m shocked that I’m going to say it, but yeah, you should. The tan looked totally natural to the point that it wasn’t so obvious but looked excellent.

I have zero experience using any other self-tanner than Blue Saint, so I suggest if you’re going to do it, start with them. They mean it with their no-orange guarantee and I can tell you that first hand. While we *hopefully* only have a few months left of quarantine, I suggest you do it ASAP to see if you like it. If you do, you can try again when you can actually see people.