Editor’s Note: As of August 5, 2020, this product is sold out. To find out when it’s back in stock, join the waitlist.

As a man, there are few things worse than just being drenched in sweat in your, uh, nether regions. There’s a reason why so many men dread that swamp-like feeling that creeps in on blisteringly hot summer days. It’s just unpleasant, and it will make any man feel gross. Sure, you can invest in some breezier shorts, but that won’t eliminate the problem if you’re in a situation that requires pants and underwear, like, say, a first date.

So what’s a man to do about ball sweat?

Enter Dollar Shave Club’s aptly named . . . Ball Spray. Yes, that is the product’s actual name. And it does as advertised, which is to say it helps to curb the spread of pants-related swampiness. The area where your privates meet your legs is such a high friction spot that you’ll need something to help curb that. The spray itself actively helps to provide all-day protection from moisture and odor, while also actively reducing friction and chafing. The fact that the spray actively fights against the latter two makes a huge difference, as friction and chafing are two of the largest contributors to that uncomfortable feeling. And unlike powders, the spray is . . . well, a spray. So there’s not a mess for you to contend with after you use it. It’s just as simple as a spraying a deodorant would be.

The cool peppermint-like smell has a dual purpose as well, as the ingredient helps to keep the whole region fresh while also contributing a good, fresh smell. That aromatic note will help fight any sweat that may start to linger as you go about your day. But should the situation get worse, the Dollar Shave Club ball spray travels well; its twist-lock cap means you can toss it in a bag and have it handy should things down south start to go south during your travels. Dollar Shave Club recommends that you use the spray “liberally on hot zones” in order to effectively fight that awful feeling. And, if you know you’re headed to go play a sport, feel free to spray it on before you get into the midst of things, as it’s not just for casual use. 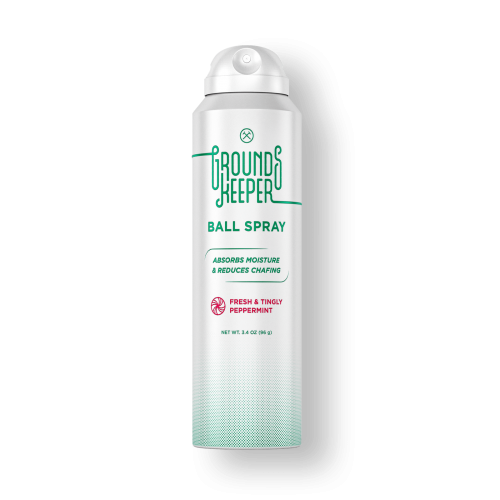