It would be nice to be able to do as much of your morning routine as possible from the shower — it’s convenient and far more comfortable than standing on cold bathroom tile while getting ready. This desire to remain in the shower is even reflected in a classic Seinfeld episode in which Kramer installs a garbage disposal in his tub so he can prepare dinner while showering. While we definitely wouldn’t recommend going that far, it is possible to get some of your daily routine out of the way from the shower.

Shaving your face, for example, is nice to do in the shower. But it’s often prohibited by the difficulty in getting a reflective surface that won’t immediately fog up. That’s why it’s worth investing in a fogless shower mirror.

It may sound magical, but fogless mirrors utilize the simple science behind condensation. Mirrors fog up because the warm vapor from the shower comes into contact with a cold surface, and turns back into water. By warming up the mirror with hot water first, condensation can be avoided and you can easily shave from the shower. Here are 3 fogless mirrors that will make your morning regimen a breeze.

The ToiletTree fogless mirror works by filling up a reservoir located behind the frame with shower-temperature water. This prevents condensation by equalizing the temperature. The frame rotates, allowing you to adjust the viewing angle and making it easy to dump out the water when you’re done showering. Plus, the mount comes with an attached shelf which is perfect for hanging razors or other grooming essentials.

Cons: Some users found that the hot water would cause the mirror shape to slightly distort. 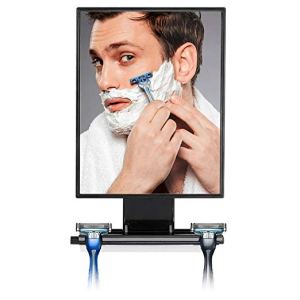 This version of the ToiletTree fogless shower mirror uses the same principle behind the other one, in a less compact, less adjustable frame. However, its bulkier body makes it somewhat more sturdy than the other ToiletTree option. Like the other option, it has a shelf for holding razors. 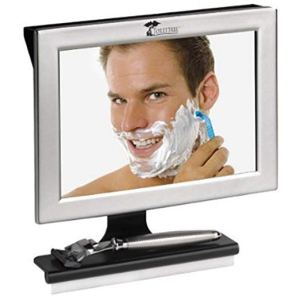 This acrylic fogless mirror hangs from a hook, so it’s easy to move it around as necessary. It doesn’t have a water reservoir; you simply hold it near the steam for a few moments to allow the temperature to equalize.

Pros: Compact design won’t take up as much space in the shower.

Cons: Fog-free doesn’t last as long as the other options, but should be long enough for most shaving routines. 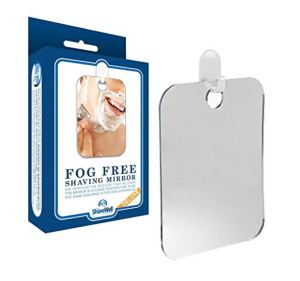