No matter if it’s selling a spot treatment, face mask or cleanser, there’s one thing most acne product marketing has in common: It’s geared toward women. The exception? Acne products marketed to teenagers. Of course, men have to deal with breakouts and acne too, and adult acne can be especially stubborn and embarrassing. If you’re looking for concealer for men, you won’t find many options.

The company was launched by two Gen Z entrepreneurs who wanted to give guys better tools for fighting acne, and the founders are on a mission.

“Nick and I founded Frontman when we realized the vastly different way that society teaches guys and girls about self-care, grooming and skincare,” says Annelise Hillmann, 23, CEO and co-founder. “Women have a million and one solutions for their beauty needs and guys have next to none. Frontman is closing the grooming gap by giving guys intuitive, simple products that target their biggest pain points, starting with acne.” 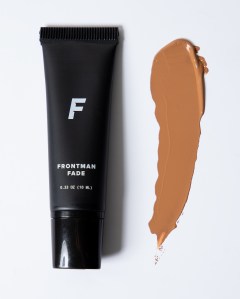 We first wrote about Frontman in April 2021, when we talked to the founders about their new concealer for men. They also sent us Frontman Fade for testing, and now that we’ve had a month to test it out, we wanted to share our full review of the product. Below, you’ll find our Frontman review as well as our original conversation with the co-founders.

Reviewing Frontman Fade: How Does This Concealer for Men Work?

We’ve written about nail polish for men, but overall the men’s makeup market is very, very niche. In most cases, men who wear makeup are wearing women’s products. That’s suddenly starting to change, and new makeup companies for men like Frontman and MATTIASS have already launched this year. It’s a natural evolution of the men’s grooming market, which includes everything from beard grooming tools to face moisturizers for men.

Frontman Fade isn’t like any other men’s product we’ve tested before, but we expect this market to keep growing quickly. (Rumor has it A-Rod is working with hims on a new line of makeup to be released soon). So how does Frontman work?

After using this product for the past 45 days, Spy’s site director Tim Werth was impressed. The makeup is extremely effective at covering up pimples, and it can even be used to hide larger breakouts. We can’t speak to the medical effectiveness of the acne-fighting properties of Frontman, but it definitely didn’t make acne worse in our testing. As long as you apply Frontman in small amounts, no one will be able to tell that you’re wearing any makeup at all. It’s also really satisfying watching your pimples disappear.

There is a bit of a learning curve with this men’s concealer. Because most men have absolutely no experience applying makeup, it can take some trial and error to learn how to properly apply and blend this concealer. You can use your fingers or a cotton swab to smooth out the product over your pimple, and once you get the hang of it, it’s relatively easy to apply. (We recommend asking the women in your life for some practical makeup tips.)

If you’re sick and tired of adult acne, then Frontman can be a godsend. Until now, guys haven’t had any options to cover up pimples, and Frontman Fade is up for the challenge. 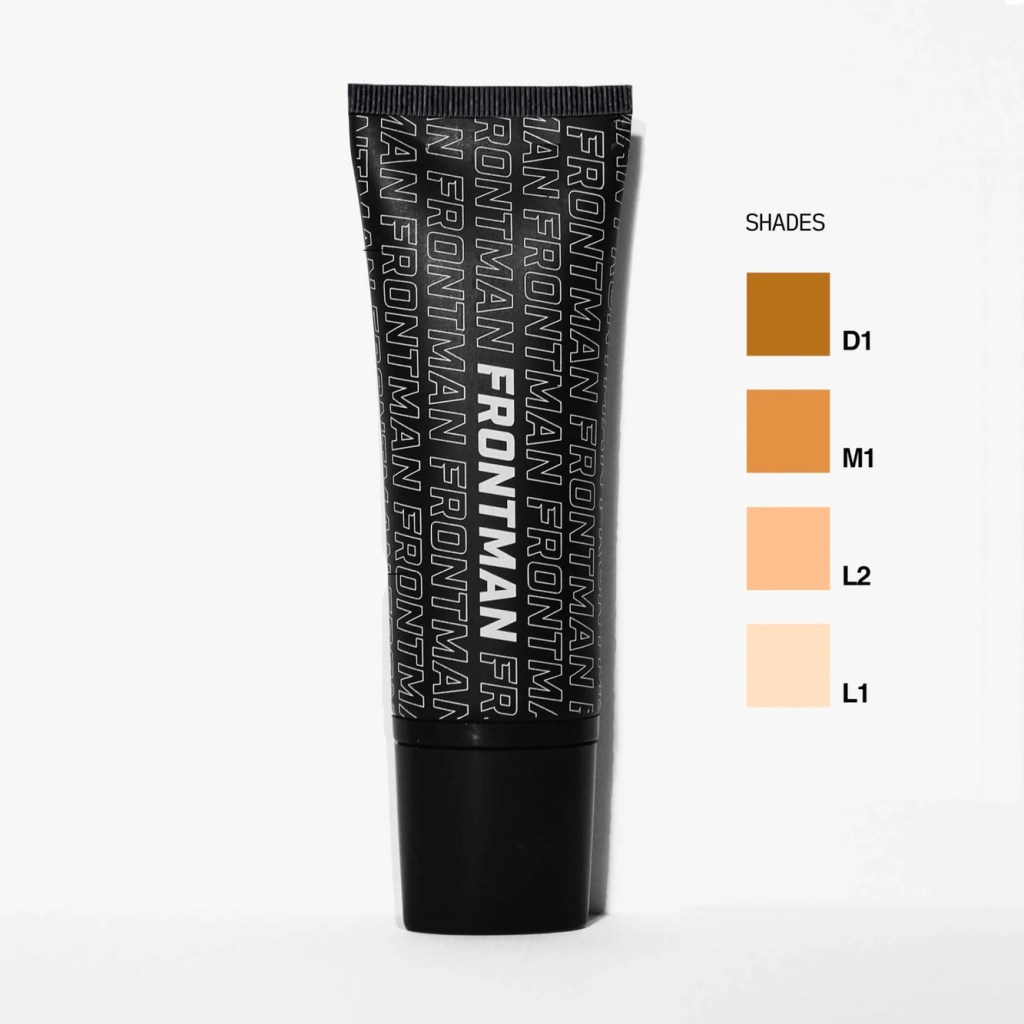 Just because there aren’t many men’s products designed to hide acne doesn’t mean that guys struggle with pimples any less. That’s something Nick Bunn, 24, Frontman COO and co-founder, has experienced firsthand.

“For myself and so many other guys, acne is impossible to escape,” he says. “Though generic treatment options helped, there was nothing that could prevent the occasional blemish. It was even worse when this seemed to happen with no rhyme or reason. As a teenage guy, waking up to find a zit on your face is a common annoyance, and it’s the most frustrating because you can’t do anything about it. While Annelise could cover her acne, I had no immediate solutions or anything I could do to improve my appearance while I was treating the breakout. Guys were actively missing a product that could provide this benefit.”

Fade tinted acne cream contains .5% salicylic acid, an active ingredient that’s proven to prevent and reduce breakouts. Natural extracts including spearmint and lemon round out the formula for additional antibacterial and acne-fighting properties. Additionally, Fade is non-comedogenic, meaning it won’t clog pores, as well as paraben-free and cruelty-free. Fade packaging is made of 100% biodegradable sugarcane.

So long as you pick the right skin tone, the before and after effects are pretty damn impressive: 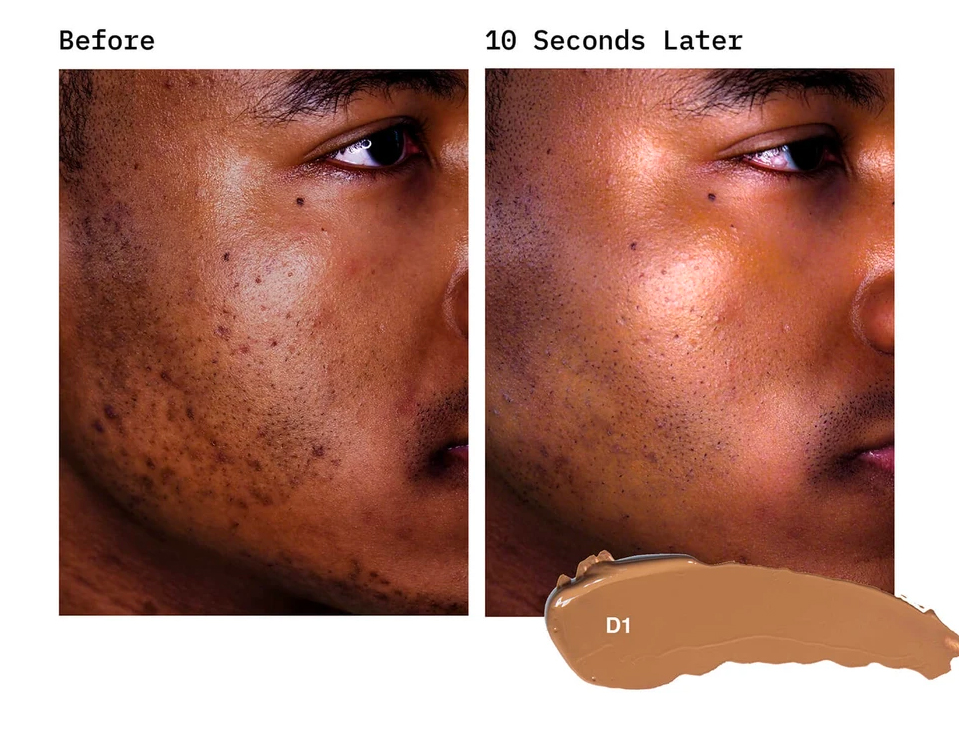 “We spent two years developing Fade because we wanted to create a truly innovative product,” Bunn says. “Working in tandem with Dr. Elise Hillmann, MD, our medical advisor, resident dermatologist and Annelise’s inspiring mother, Fade is unlike anything currently available for men, an OTC product with salicylic acid that actively treats acne while providing great coverage.”

What makes Frontman different from other acne brands out there is that with most acne solutions targeted to guys, it takes weeks or months to see results, Bunn points out. “There was nothing immediate that we could do on a daily basis to feel more confident,” he says.

Aside from making breakouts a thing of the past, the ultimate goal is to change the conversation around men’s grooming and skincare. “The grooming industry and culture’s broader attitude toward male grooming has been traditionally very prescriptive and hypermasculinized,” Hillmann says. “‘Do this, not that. Look perfect, but do it without caring how you look.’ The women’s grooming industry has already had its reckoning that people have real bodies and real skin. It’s time we have that for men as well.”

That goal might sound ambitious enough on its own, but Gen Z isn’t known for aiming small. In addition to changing the way men think about skincare, the company’s founders also want to help develop an entirely new product category, one that combines cosmetic treatments with acne treatments. “Instead of white labelling women’s products that have been done before, we’re creating an entirely new category for the men’s grooming industry: functional cosmetics,” Hillmann says. “This takes the efficacy of skincare and combines it with the instant gratification of cosmetics for the ideal solution. Our approach actually addresses guys’ pain points with the most optimal solution — minus stigma.”

They’re so dedicated to helping customers clear up acne that they encourage them to text them with any questions and people take them up on it. “We get texts and DMs from guys all the time asking about our product and how it will work for their personal skin concerns,” Bunn says. “We field most of the questions ourselves, helping guys learn about best practices for better skin and about choosing their shade of Fade. We also have our Ultimate Guide to Acne on our website that customers frequently tell us has been the most straightforward and relatable information they’ve found on acne.”

Frontman will be releasing several new shades of Fade this year, in addition to a new product launching this summer. To order Fade, the brand’s signature (and only) product, head to the company’s online store. This concealer for men comes in a few different shades, so pick the best match for your skin tone.

Why Hyaluronic Acid Is the Secret to Hydrated, Happy Skin