In a perfect world, everyone would cop to their mistakes. Unfortunately, this often isn’t the case, especially in car accidents. Even if you were following the rules and driving safely, you could still end up being faulted for an accident that someone else caused. And the truth is, no matter how safe a driver you are, you’re eventually going to end up in an accident. That’s why if you drive, it’s a good idea to have a dashcam. It might cost a bit in the short run, but it could save you a lot of time and money in the long run. The key is to get one that you can actually depend on. I had a chance to try out the Roav DashCam Duo for several months, and it has several features that put it above other dashcams in the same price range. The biggest thing that makes the Duo special is that it has two cameras, one facing inside the cabin and one facing outward.

What’s In The Box 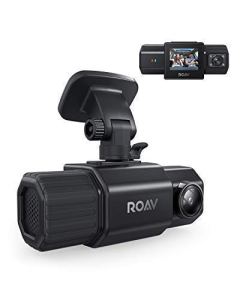 If you haven’t heard of Roav, it’s a sub-brand of Anker. Anker is best known for charging accessories, but they’ve gradually been expanding into other tech fields, and ROAV is specifically focused on tech for the car. Of its multiple dashcam offerings, the Duo might be ROAV’s best offering, thanks to its dual cameras.

Included in the box is a cigarette port charger with two USB ports, a long USB to micro USB cable, a user manual, two windshield mounts with 3M brand adhesive, and the dashcam itself. Including two mounts is a good idea on ROAV’s part, because I somehow managed to lose one of them. The power cable is an important feature, too; the Duo is not battery powered, so it’ll need to be plugged in at all times in order to work. Overall, this is a good thing, because you never have to worry about it running out of juice while you’re driving.

The dashcam has a screen display, so you can see what the camera sees in real-time and control the settings using the buttons. The interior facing camera can also rotate up or down to find the perfect angle. While the dashcam has a long settings menu and is packed with different features, it’s very easy to use and setup. The only thing you need to buy before getting started is a MicroSD card. Once you’ve put in the card and plugged it into the power supply, it will automatically start recording. That means that if you leave it plugged in, the unit will record every time you turn on your car. That eliminates the problem of forgetting to turn it on before starting to drive. 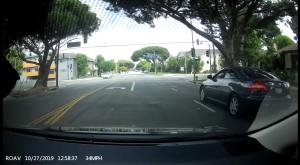 The camera records on a loop, so if you run out of space on the card, the camera starts to write over old footage. However, the built-in motion sensor allows the camera to create emergency files that won’t be written over. That way, if you’re involved in an accident, you won’t have to worry about the footage being deleted. During my several months of testing out the camera, I (fortunately) never got into an accident, but my motion sensor was set to be sensitive enough that I did see how the emergency recording feature worked. It’s perhaps too alert at times; it created some emergency files where I genuinely couldn’t tell why it was recording in that mode. It’s worth noting that eventually, as you accumulate old emergency files, they will start to be written over to preserve memory space. This is ultimately a plus, since it ensures you’ll never run out of space.  The amount of memory you have is obviously dependent on the size of the card you have. I was using a 32GB card, which was sufficient.

An Extra Set Of Eyes And Ears

In addition to interior and exterior recording, the camera also has a speaker and microphone, so you can capture conversations in the car and play them back from the unit. The Duo also timestamps the footage, so you can see the time, date, and even the speed of your car when playing it back. As for the audio quality, it’s a little hard to hear people in the back seat, but conversations in the front can be heard pretty clearly. The microphone can also easily be turned on and off from a button on the unit. That’s worth noting because some states, like California, have laws regarding eavesdropping and recording phone calls without permission. That button can help ensure that you stay on the right side of the law.

As for video quality, it’s clear in the daytime. You can read license plates, as long as the car isn’t too far away or moving too fast. Nighttime is slightly more limited; you can see what’s happening outside, but the glare from your headlights will block out the ability to read some license plates. Interior camera quality is very good in the day, but once again, it’s not as sharp at night. However, having the inside camera is still a great feature for a variety of reasons. 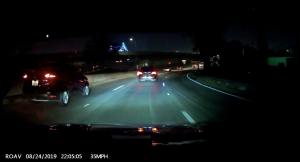 If you’re a Lyft or Uber driver, the inside camera can be a good way to ensure your safety and record incidents involving drunk or belligerent passengers. It’s not just good for recording passenger activity, though. The interior facing camera is the only way to capture traffic behind or beside your car. Having a dashcam that only faces out doesn’t do you much good if you get rear-ended or sideswiped.

Another benefit of the motion sensor is that you can activate parking mode. However, if you want to use parking mode, you have to separately purchase a hardwire kit. This kit plugs into a OBD-II port in your car, providing a constant supply of power to the camera. If you’re not sure if your car has an OBD-II port, all you need to know is that if the car was manufactured after 1996, it does. Plugging the camera in with the hardwire kit is very easy, and it can be done in a couple of minutes. The motion sensor will cause the camera to start recording if any activity is detected. I found the responsiveness could have been somewhat faster. After going around the front of my car and touching the front of the car and the handles, the sensor only activated once I opened the door of the car and got in. For whatever reason, Anker seems to have a hard time keeping the hardwire kit in stock on Amazon, but there are generic versions out there. If you’re specifically looking for an option with a great parking mode, this might not be the best option for you, especially since it exclusively records to microSD.

ROAV’s Dashcam Duo is intuitive to use and it relies on an SD card and a power cable, so you never have to worry about things like WiFi or battery life. The images are clear enough to be useful in the event of an accident or traffic incident. Best of all, the dashcam has two high-def cameras. While many dashcams only have one lens facing out, this one allows you to capture far more activity by recording the inside of the vehicle and the road ahead. The loop recording feature ensures you never run out of space, but the motion sensor saves unusual activity and prevents it from being overwritten. If you’re looking for a dashcam that will ensure you won’t miss any important activity and you don’t want anything that’s too complicated to use, then the Roav Duo is a great buy.

Buy Now on Amazon
No Backup Camera? No Problem, With These Genius Mirror Dash Cams