Holding your phone while driving is never a good idea. Whether or not you live in a place where it’s legal to hold your phone and drive, distracted driving accounts for a huge number of accidents every year and putting down your phone can literally be the difference between life and death. We also understand that phones have one necessary feature when driving, which is to use their navigation system. So, if you’re going to use your phone as a GPS, invest in a dashboard console pad that can hold your phone for you so that you can keep your hands on the wheel and your eyes on the road.

A dashboard console pad comes in two styles. One is designed to hold phones on an angle, turning them into hands-free GPS systems. We’ve included two of those on our list. The second is a flat design that can be used to hold your phone while you drive, keeping it secure and out of arms reach so as not to tempt drivers if a call or text comes in. This frees up cup holders in the car’s console to be used for drinks and ensures phones, as well as glasses and other small objects, don’t end up lost under a seat.

We’ve rounded up some of the best options for both styles. Check out our favorite dashboard console pads below.

For a secure spot to place your phone and other small items while driving, try the Ganvol Anti-Slip Car Dash Sticky Pad. The 5.3 inch by 2.7-inch mat is a big enough surface to hold a smartphone, glasses, change, and other items that drivers want to keep nearby. The Ganvol absorbs shock, which can help to reduce damage to phones caused by the vibrations of a car. If the pad becomes dirty or dusty, it can be cleaned with water and reapplied. The flexible pad can lay flush on a flat dashboard and adhere to a slight curvature.

Pros: The Ganvol is designed to be able to withstand extreme heat and extreme cold and still remain firmly in place on the dashboard.

Cons: Ganvol notes that when removing the phone from the mat, the mat may stick to the phone and peel off the dashboard. Users can get around this by placing only the edge of the phone on the mat and not the entire phone. Depending on the type of phone case, paint from the case may stick to the Ganvol pad. 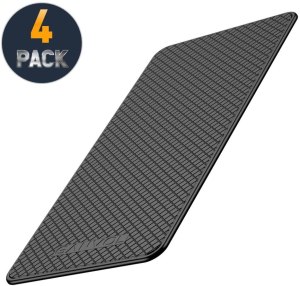 Hold your phone at a comfortable angle with the IPOW Anti-Slip Silicone Car Phone Dashboard Pad. Designed to be used with smartphones and navigation systems and keep them at eye level for the driver or navigator, the Ipow has two pairs of rubber holders that can be adjusted between 3.5 inches and 7 inches and hold phones up to 0.55 inches thick. The Ipow can be washed with soap and water and reused. It is made to withstand heat and drops in temperature.

Pros: The Ipow has four silicone feet that adhere to the dashboard and are designed to not leave a sticky residue.

Cons: The Ipow has issues sticking on dashboards that are not completely flat.

Easily check your phone for navigation information using the Staont Anti-Slip Silicone Dashboard Car Pad. Like the Ipow, the Staont is designed to hold phones on an angle. The stable, anti-slip pad sits on the car’s dashboard and holds the phone at an ergonomically correct 100-degree angle. Universally compatible with most smartphones, the silicone bottom and sticky pad protect the phone against bumps and scratches. The Staont will keep your phone securely in place during sudden stops. We also like that the front of the pad has a small area with a raised lip that is ideal for holding glasses, loose change, or other small objects.

Pros: The Staont includes a cable slot that will keep your cable out of the way while charging your smartphone.

Cons: The Staont may not be able to hold phones with thick, protective cases. If the phone is not properly inserted into the Staont’s holders, it can easily fall out when accelerating.

For a dashboard pad console that curves with your car, try the Hulless Super Sticky Car Dashboard Anti Slip Mat. The high polymer elastic material used to create the oversized pad adheres to flat and curved dashboards, creating a secure spot to place phones and loose items. The Hulless is made with eco-friendly, non-toxic material that will decompose when it comes into contact with soil.

Cons: The Hulless should not be left in direct sunlight and can melt in the heat. 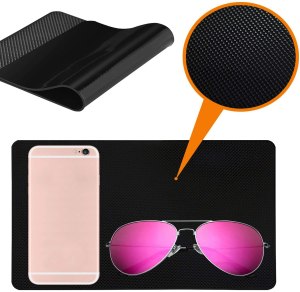