With Moto GP-inspired looks and a revvy 125 cc single, the Ninja sport bike is a versatile bike that skirts the line between being a mini bike/moped alternative and just a full-on motorcycle. At least in California, it’s considered a “real” motorcycle, which means it’s fully street legal and you can ride one for your daily commute if you so choose.

You may arrive hard of hearing, but likely with a broad smile as well, if you’re into the experience of riding these sporty, relatively high-performance 125’s. Thanks to its typical motorcycle handling, four-speed manual transmission and strong low-speed pickup, the Ninja is often used as a training bike as well. 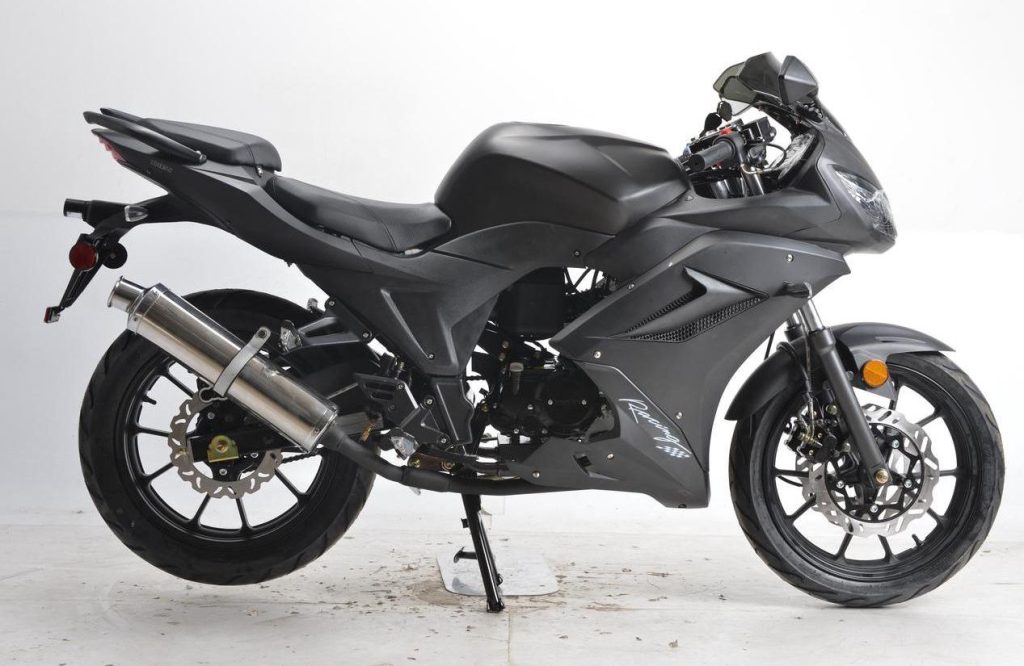 This four-stroke bike weighs under 200 lbs dry and has a top speed of around 55 mph, though there’s a wide aftermarket for these 125cc motors and more high-end performance is often just a pipe away. The motor itself features electric start, electronic ignition and is rated for 8 horsepower or 6.2 KW at 9000 rpm. Similar motors in 125cc shifter karts achieve horsepower levels in the mid-teens, so there’s plenty of room for mods and customization.

The riding experience of the ultra-light Ninja 125 is an addictive cross between riding a dirt bike or mini bike and a full-on sport bike. Thanks to relatively large, sticky tires and a very light frame, the Ninja sport bike leans and turns like a serious sporting machine. It benefits from aluminum hubs and disc brakes front and rear as well, letting it handle and stop very well for something at this price point. It isn’t overwhelmingly powerful, but a small bike like this can be an incredible bargain in terms of the amount of tactile thrills it provides. And, it’s fully road legal, meaning the Ninja sport bike is more than just a toy that will live in your garage or the back of a pickup truck. It’s ready to hit the streets.