Electricity is easy to take for granted; most people just plug in their electronics without giving it a second thought. But not all electricity is the same; there’s AC power and DC power. The distinction might seem like it’s only worth knowing if you’re an electrician, but the difference between alternating current and direct current was important enough to spark (pun intended) what was called “The War Of The Currents.” The War of the Currents was a feud between Nikola Tesla, who was a proponent of AC, and Thomas Edison. Edison had developed direct current and sought to discredit AC to protect his pocketbook. While that’s all mostly settled history, the distinction is still worth knowing.

The majority of devices are powered by AC, which isn’t a problem when plugging into a wall outlet, which supplies AC power. Car batteries, however, supply DC power. You can plug some things like your phone into the car. But if you spend a lot of time in your car, it’s understandable to want to take some of the amenities from your home with you. For example, if you want to be able to charge your laptop or power any small appliances, a power inverter can be a handy thing to have (it’s important to make sure you know the wattage of your devices, though, so you don’t blow a fuse). Vehicle power inverters are essential for campers, too. Here are our three favorite options.

This power inverter has two outlets and two USB ports, and it’s powered through the cigarette lighter port. It’s a lot of power in a very small package; the longest side is less than 5 inches. There’s a power switch and LED indicator, so it’s easy to make sure you don’t accidentally leave it running.

Cons: Fan can be loud. 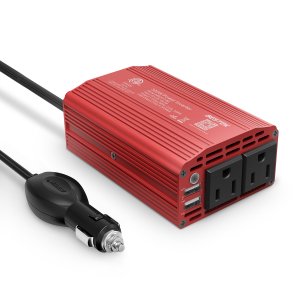 Energizer has a wide variety of power inverters, which are great options for a variety of settings. This is the 500 watt option, but there are also as low as 100 and as high as 4000 watts, so you can find the one that works best for you. It can connect directly to your battery, or you can connect it using the cigarette port, depending on the model you choose.

Cons: Wiring is rather short. 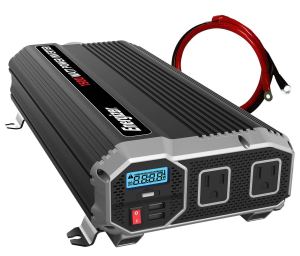 This power inverter has a single outlet and two USB ports, plus an LED indicator and a cooling fan. It’s the most compact option on this list, and can easily be stored in most center consoles when not in use. Like the Bestek option, it plugs in through the cigarette port.

Cons: Cord is only two feet. 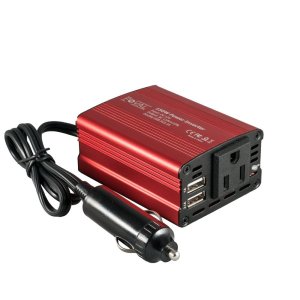