Activated carbon has been popping up in consumer goods for a few years now, and can be found in everything from the practical (toothpaste) to the preposterous (ice cream). One place you’ll see activated carbon is in air purifiers; it’s added as an extra step in addition to other filtration methods such as high-efficiency particulate air filters, better known as HEPA. If you’re looking to fight pollutants, irritants and allergens in your home, looking for a purifier that includes an activated carbon layer is a great way to trap more irritants.

Sleek design, smart features and a price you can stomach make this a great overall pick for a home air purifier. It can purify air in rooms that are up to 219 square feet, and Energy Star certification and CARB-compliance ensures it’ll do so efficiently. This unit also features three-stage filtration — there’s a pre-filter, a true HEPA filter and an activated carbon filter. LEVOIT also offers custom filters that can be used with this unit, such as options specifically designed for areas with high VOCs or for pet-owners. It comes in black or white, and the cylindrical shape means it won’t take up too much space in any room.

Cons: For larger spaces, you may want a larger unit. 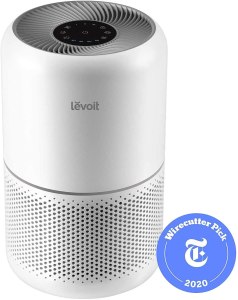 We’re partial to cylindrical designs, because of their space-saving benefits and versatility over some of the bulkier units on the market. This option from Blueair pulls in air from all directions thanks to its cylindrical shape, allowing it to be placed anywhere in the room. It’s designed to work in smaller rooms up to 185 square feet. It features a combination HEPA and activated carbon filter to capture odor, VOCs, dust and airborne viruses. A washable pre-filter is included, and the pre-filter is available in a variety of colors.

If you’re looking for an option that can handle larger rooms, this filter from Winix is capable of purifying rooms up to 360 square feet. The unit has multiple filtration layers for cleaner air, including a washable mesh pre-filter, an activated carbon filter layer, and a HEPA filter. The unit is CARB-compliant, UL-Listed and Energy Star certified. 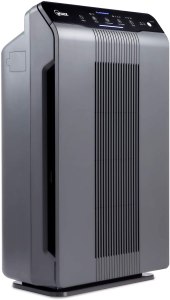