With wildfires raging out of control around the world, and wildfire smoke traveling all the way from Oregon to New York City, you might have noticed an extra haziness in the air lately. Not only does this make for some unattractive weather, but it can also actually be harmful to your health, too. According to the experts we talked to, wearing N95 masks can protect you from wildfire smoke when you’re outside, but to protect the air quality inside your home, you’ll need to rely on the best air purifiers.

The best air purifiers for wildfire smoke help filter the air inside your home, which can sometimes be even more polluted than the air outside, according to the U.S. Environmental Protection Agency.

Air quality warnings are becoming more common across the United States thanks to recent wildfire outbreaks, and wildfire smoke is even more toxic than news outlets originally reported. So, it’s time to take matters into your own hands and invest in one of the best air purifiers for smoke. These devices can make the air quality in your home much healthier, preventing health issues associated with breathing smoke and other forms of pollution.

But before you go out and buy the top air purifier on our list, there are a few things you need to know. Below, we’ll discuss the different filters to look for based on the type of smoke you need to get rid of. We’ll also give you the definition of CADR, and then we’ll run through the best air purifiers for smoke available for ordering online.

When shopping for an air purifier for smoke, the first thing you have to understand is that there are different types of smoke. For example, wildfire or wood smoke is harmful to you in different ways than cigarette smoke can be. Wildfire smoke actually carries large particles of the material that’s been burned, which can enter your lungs or settle on the surfaces of your house, causing permanent odors and general uncleanliness. In addition, wildfire smoke can contain fine particulate matter that is extremely toxic, and a HEPA air filter is needed to filter and remove these toxic chemicals from the air.

On the other hand, cigarette smoke and vehicle exhaust are filled with noxious odors and gases that normal particle filters don’t capture. Still, these are the odors you definitely don’t want sticking around your home and the gases you don’t want entering your airways. Below, we’ll explore the two different filters to look for to remove these two very different types of smoke.

Unfortunately, the best HEPA air purifiers can be hard to find thanks to surging demand, but they’re the gold standard for anyone worried about wildfire smoke.

If you’re more concerned with filtering out cigarette smoke, marijuana smoke or vehicle exhaust, you’ll need to look for a gas-phase filter, like an activated charcoal filter. That’s because particle filters can’t remove gases and odors. Gas-phase filters work by absorbing unwanted chemicals from the air and are particularly effective at dealing with noxious odors and gases.

To help you assess the efficiency of any potential device you’re looking to buy, a metric known as CADR, or the Clean Air Delivery Rate, was developed by the Association of Home Appliance Manufacturers (AHAM). The CADR value indicates the volume of filtered air delivered by the device. When assessing a device, you’ll find separate scores for three common particles, tobacco smoke, dust and pollen, as well as a rating for room size. In general, just remember a higher number means the device filters the air more quickly.

Below you’ll find our top nine picks for the best air purifier for smoke. We’ve included devices across a range of price points and in a number of different designs. Scroll down to find the device which is going to be creating cleaner air for you to breathe in the near future.

Designed to cover rooms up to 540 square feet, this air purifier for smoke relies on triple filter technology to capture up to 99% of airborne pollutants. First, the fabric pre-filter, which is machine washable, traps larger particles like dust mites and hair. Second, the particle filter traps smaller bits like pollen and mold. Finally, the carbon filter absorbs foul odors like smoke. The best part? This Blueair purifier is super simple to use. Simply push the one-button control to turn the device on and off. The built-in warning system glows red when it’s time to change one of the filters. 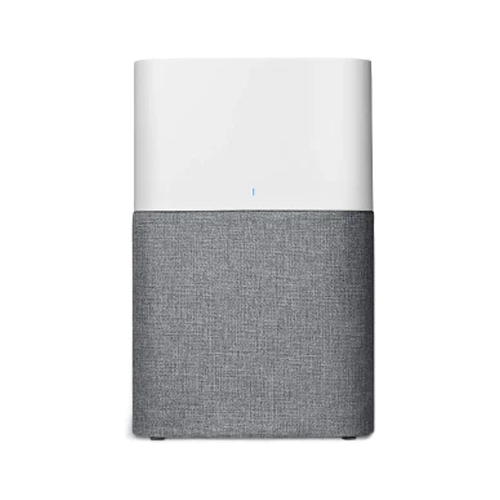 Dyson’s popular Pure Cool air purifiers set an extremely high bar. Not only do they contain HEPA filters to improve air quality and carbon filters to absorb odors, but they also come with a range of smart features and can help control the temperature in your living space. Of course, there’s one major drawback — the price tag. Dyson truly does offer superior engineering and best-in-class product design, but you’ll have to pay a lot more than necessary, which is why this air purifier isn’t our top pick.

That being said, if you’re looking for the best air purifiers for wildfire smoke, you have to consider the Dyson Pure Cool TP-04 smart air purifier. 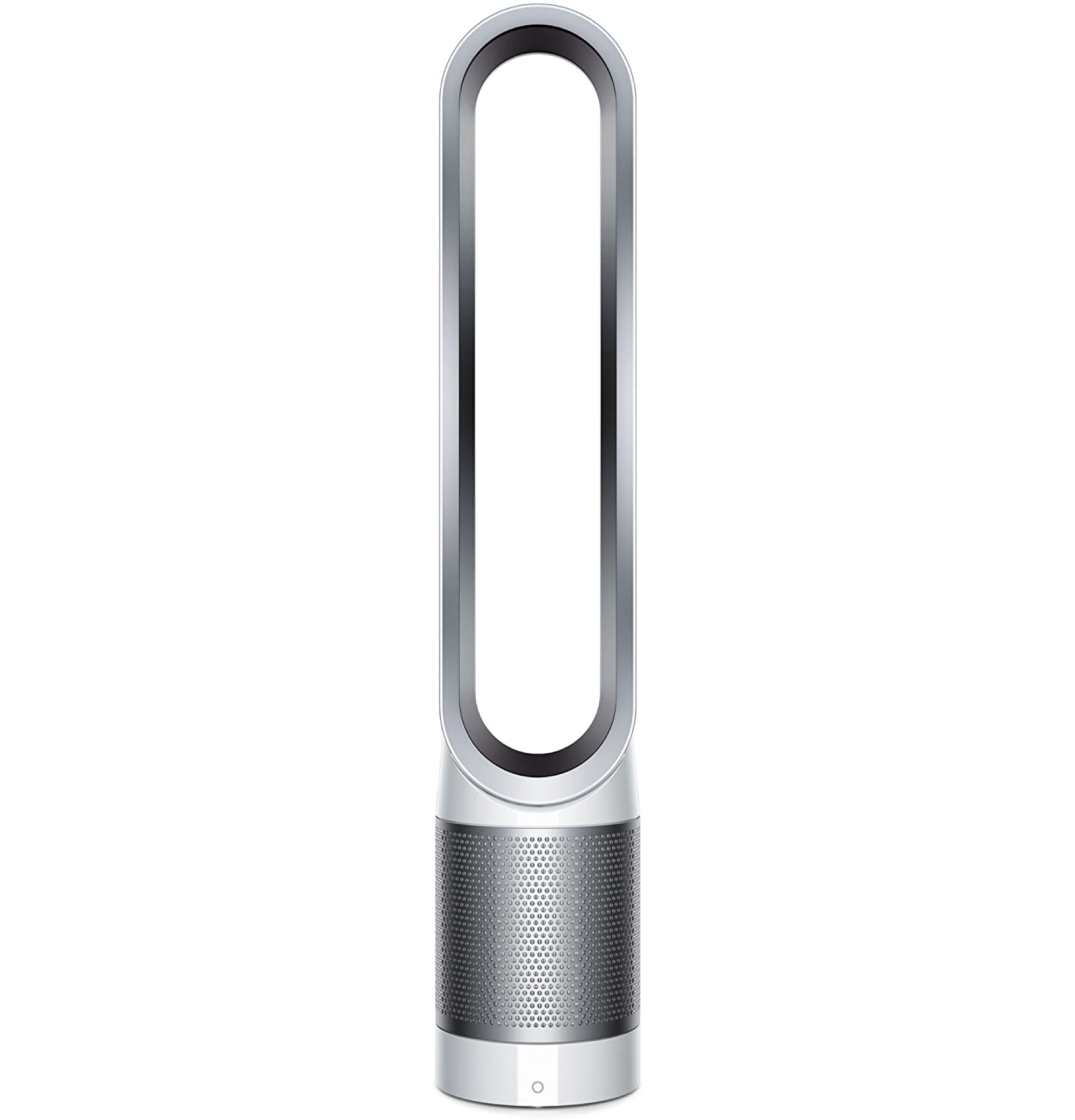 Made to accommodate rooms up to 1,560 square feet, this purifier cleans up to 99.99 percent of particles 0.01 microns in the air twice per hour. The combined activated carbon and true HEPA filter effectively remove wildfire smoke, pollen, and other pollutants and allergens. There’s a colored LED indicator light that lets you know just how clean or dirty your indoor air is, and there are five fan modes and timers that can be adjusted to your preferred settings. This product operates near-silent on lower speeds and can easily handle larger living rooms, bedrooms, and beyond. 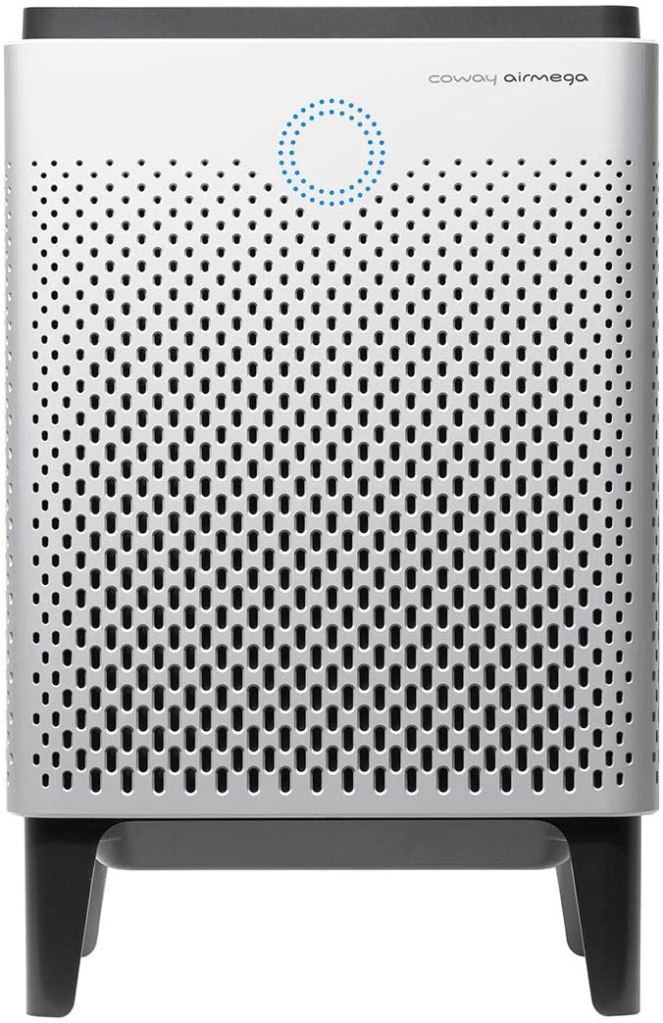 Samsung doesn’t just make smartphones and TVs. They make all kinds of home appliances that can make your life better. Case in point: the Samsung Cube Smart Air Purifier. This silent and wind-free purifier features a three-stage True HEPA filter system as well as an air quality sensor with an easy-to-read digital display. But, the best part of this air purifier for smoke is that it’s WIFI-enabled and can therefore be controlled by a mobile device or a smart assistant, like Alexa, Bixby or Google Assistant. 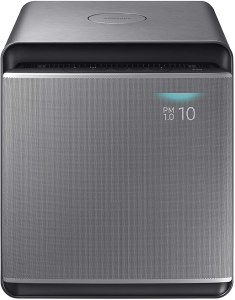 The LEVOIT Core 300 combines three filters to get rid of smoke and particles of all types. The H13 True HEPA filter works to remove particles 0.3 microns in size, while the high-efficiency activated carbon filter absorbs gaseous smoke and foul odors. Both of these filters are complemented by a pre-filter, which can be cleaned regularly thereby helping the HEPA and charcoal filters to last longer and decreasing the running cost of the air purifier. In addition, this powerful purifier can refresh the air in rooms as big as 219 square feet up to five times per hour. 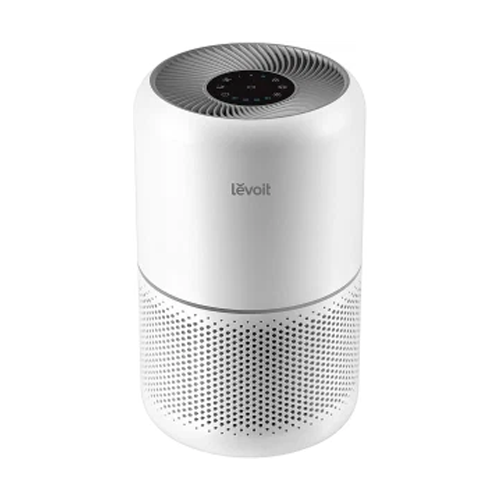 If you’re a smoker, one of the best things you can do to eliminate smoke odors from your home is to mount your air purifier near the ceiling. In this way, the purifier can trap smoke particles, like tar and nicotine, before they settle on your furniture and flooring. In many cases, attaching an air purifier for smoke to the wall would require a custom-built mount, but the MISSUE HEPA Air Purifier comes ready to be placed where you need it most. 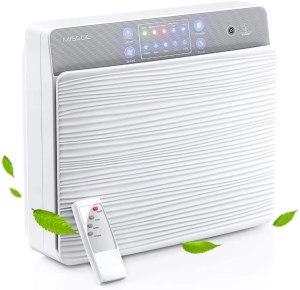 Unlike many things you read on the internet, the HATHASPACE Smart True HEPA Air Purifier has some interesting data to back up its claims of being the best air purifier for removing airborne viruses. According to a third-party report (Intertek 2021), the device boasts a 99.99% removal rate of H1N1 & EV71. This is thanks to a unique, honeycomb activated carbon filter, an anion generator and a five-stage HEPA filtration system. Not only will all these filters remove viruses and particles 0.3 microns in size, but they’ll remove smoke and other odors, too. 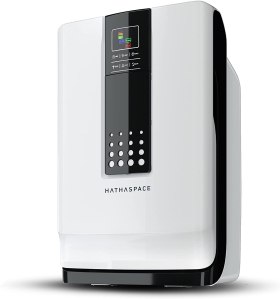 While air purifiers for smoke can make your home healthier, they do use a lot of energy to constantly clean the air. Not only does this make your energy bill higher, but it also increases your carbon footprint. For that reason, we recommend the Conway Mighty Air Purifier. This device features an auto mode so that when no pollution is detected for 30 minutes, it will automatically stop and enter an eco mode to save energy. In addition, the device boasts four-stage filtration, including a washable pre-filter. 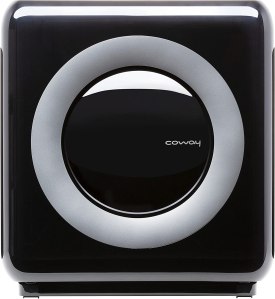 The Medify MA-40 Air Purifier only has one filter, namely a HEPA H13 filter, but it does cover much larger spaces than most of the air purifiers on this list. This powerful machine can clean the air in spaces of up to 1,600 square feet in one hour or 840 square feet every 30 minutes. Its filtration system can remove smoke particles down to 0.1 microns, meaning this is a good choice for wildfire smoke but may not be as effective in battling cigarette smoke. As an added bonus, this sleek purifier is ultra-quiet on the lowest of its three fan speeds, running at just 46dB. 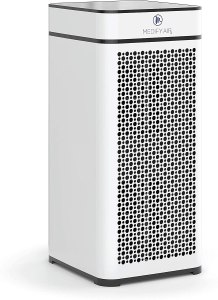 While there are a plethora of household air purifiers for smoke to choose from, sometimes they aren’t up to the task at hand. If that’s the case for you, consider investing in a professional-grade air purifier, like the IQAir HealthPro Plus Medical-Grade Air Purifier. This device relies on HyperHEPA, V5-Cell, and PreMax filtration to remove microns one hundred times smaller than 0.3 microns from the air. As an added bonus, thanks to its size and powerful motor, it can cover homes as large as 1,125 square feet. 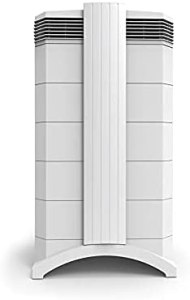 Place this mini air purifier in your office or any other small room for immediate filtration of airborne pollutants. It comes equipped with a pre-filter and true HEPA filter to remove 99.7% of airborne particles such as wildfire smoke, dust, pollen, and more. This device is powered by USB or DC adapter and operates at a low noise level so it won’t disturb your rest or workday. 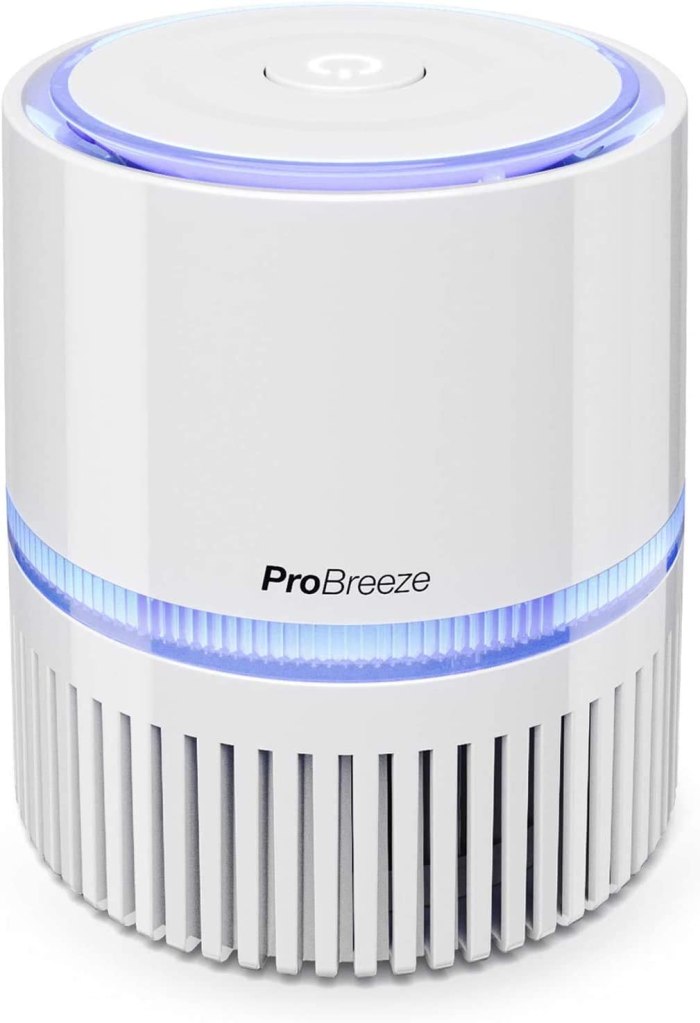 The Mooka True HEPA Air Purifier offers the same level of filtration that many of the other models on our list feature, but it costs a fraction of the price. Not only does this little device boast a True H13 HEPA filter, but it also has an activated carbon filter, allowing it to both filter out particles as small as 0.3 microns and then absorb any odors that are still left in the air. Plus, it can filter the air in rooms up to 323 square feet every 12 minutes. 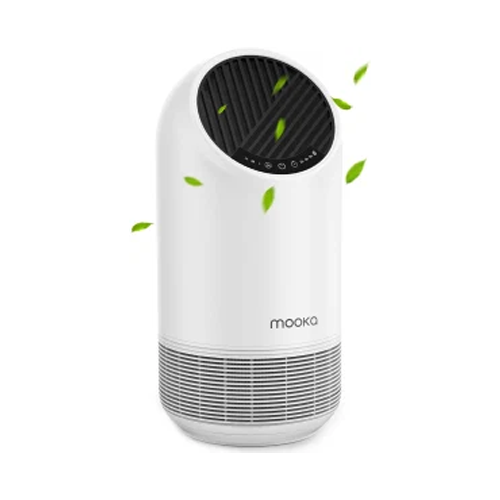