Laundry is the act of cleaning clothes, sheets and towels and comes with many pleasant aftereffects. Bedding smells fresh, stains are gone. But laundry can also be messy. Liquid or powder cleaner can spill. Musty smells from washing machines can overpower the summer rain scent promised by dryer sheets and renegade lint that escapes from the dryer can end up getting tracked throughout your house. One way to put the ‘clean’ back into ‘clean laundry’ is with a versatile lint bin.

Lint traps should be cleaned prior to each use of the dryer. A build-up of lint can lead to catastrophic results. Lint can get into the ductwork or vents and cause a fire. A dryer should never be running while the home is empty and it is imperative that a deep clean of the dryer and vents is done at least yearly. As for the more frequent cleaning of the lint trap, disposing of the lint can be a pain if your laundry area is not located near the garbage. That’s why we like using a lint bin that is dedicated to disposing of lint. Not only does this add a convenience factor, but its location near the dryer also acts as a reminder to clean the lint bin prior to turning on the dryer.

Laundry should be about getting things clean. Stop lint from becoming another eyesore with one of the best lint bins.

Discard of lint easily and discretely with the help of the Lint Holder Bin for Laundry Room by A.J.A. & More. The large but sleek bin measures 9.25″ wide x 9.25″ high x 2.75″ deep, making it big enough to hold several weeks of dryer lint before it needs to be emptied. Made from ABS plastic, the durable lint bin is 3 mm thick and gives users the option of either hanging the bin thanks to the keyhole hook or using the 6.25″ wide x 5.5″ long magnetic backing to attach the bin directly to the dryer. A.J.A. & More also offer several matching laundry room accessories, including a smaller bin for items found in pockets and a matching bin for dryer sheets.

Cons: The lint bit may be too large for some users. 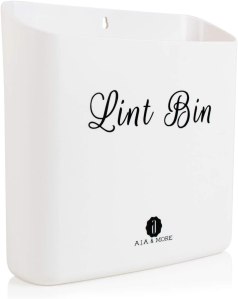 Pros: In addition to lint, users can also purchase additional wastebaskets for storing laundry pods, dryer sheets and to use as storage for items found in pockets.

Cons: The mDesign does not attach directly to the dryer and can’t be wall-mounted like the other three lint bins on our list. 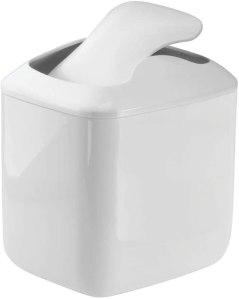 Keep lint out of the dryer and off the floor with the attractive AfriOz Laundry Room Lint Bin. Measuring 9.25″ wide x 9.25″ high x 2.75″ deep, the white lint bin can be mounted on the wall using the key hook outline or attached directly to the dryer thanks to the large magnetic backing. Included with each bin is a biodegradable and reusable Hessian sheet bin liner.

Pros: The AfriOz is the only lint bin on our list that comes with its own reusable liner, making it easy for users to carry the liner to the garbage and discard of lint without having to remove the bin from the dryer or the wall.

Cons: The AfriOz comes with a big price tag. 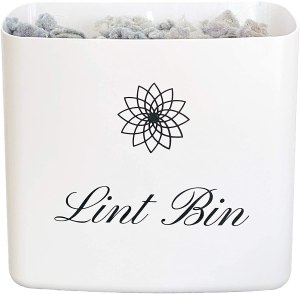 A small laundry room doesn’t mean you have to live with lint. If you’re tight on space, we recommend the HowLuxe Creations Laundry Room Lint Bin. The lint bin offers an alternative to the other lint bins on our list for users who have smaller laundry areas or don’t require an oversized container. Made from durable plastic, the HowLuxe includes a keyhole mount and a magnetic back. The company also sells the same bin in a larger size.

Pros: The lint bin from HowLuxe is compact enough that users can purchase multiple units to create an organization system on the side of their dryer for lint, laundry pods and dryer sheets.

Cons: Because of its size, the HowLuxe will need to be emptied more frequently than other lint bins. 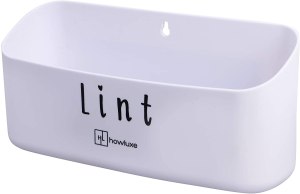