Dogs are cute and all, but there’s at least one thing they do that… isn’t so cute. Dogs do be poopin’.

We can’t blame them, we poop, too. But, when we go number two, all we have to do is press a button and the sight of our doo-doo disappears into the void of society, aka, our sewer systems. That’s not the case with man’s best friend. Instead of kissing their crap goodbye with a quick flush, we have to physically pick up their dumps and throw them into our trashcans. It’s disgusting, it’s smelly and, if you’re choosing to do the ‘ole hand-in-plastic-bag method, it’s unsanitary as hell. Luckily, we live in a world in which we can ditch the manual pick-up with the best pooper scoopers money can buy. No more bending down with a bag in hand just to feel your pet’s freshly pushed-out poo, people.

We know, we’re being a little… explicit with our word choices. But, isn’t the act of reaching down with your face closer than it needs to be to feces as explicit as it gets? The best pooper scoopers ditch the bend-down method completely by allowing dog owners to stand straight up and easily snatch a log or two far from their faces. Plus, they’re almost always tremendously inexpensive. It’s like, why wouldn’t you want to own one?

Nature’s Miracle is a pooper scooper aptly named for what it’s designed to do. That is, in fact, tending to nature’s miracles. This device is one of the highest-rated at both Chewy and Amazon for just how effortlessly well it works. The scooper uses a spring action that quickly picks up number twos using a non-stick surface. The plastic used is entirely odor-blocking, so folks will never have to deal with smelly scooper stinking up the neighborhood. There are two sizes available in medium and jumbo, so no matter the damage your pet typically does, Nature’s Miracle will be able to handle it.

When it comes to purchasing a solid pooper scooper, you’re going to want to invest in something sturdy and unbreakable. That’s why this pooper scooper from PPOGOO is seriously one to consider. This durable scooper uses high-quality ABS for lightweight construction and a tremendously well-manufactured design. It’s ideal for one-handed use and gets the job done in a matter of seconds. Although the plastic on the scooper cleans off easily, you’re even able to place a bag at the bottom so poop never touches the plastic. If you need to store the scooper, it folds down into half the size so you’ll never have to see it if you don’t want to. 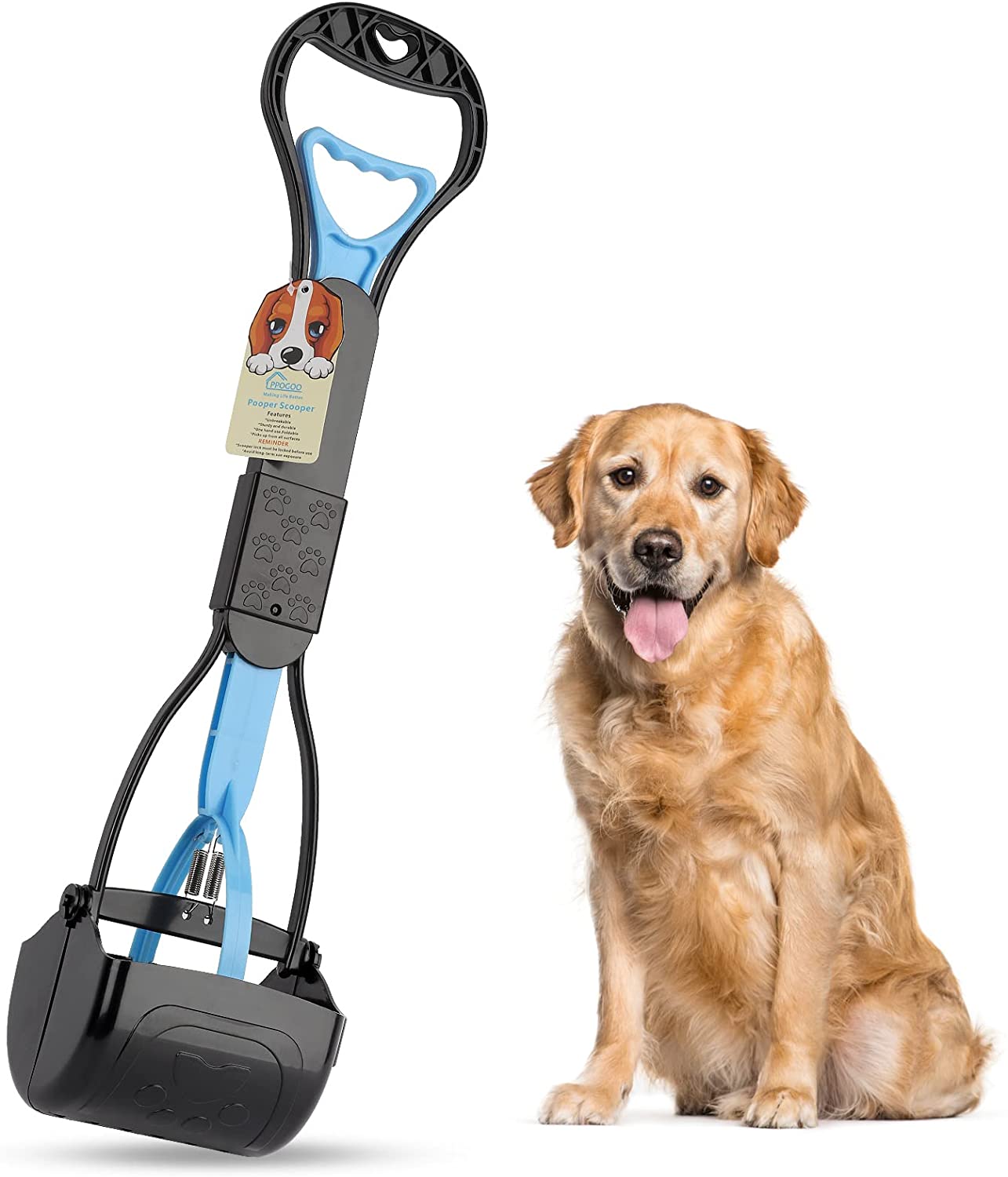 Pooper scoopers will typically cost you anywhere around the $15 to $20 mark, which is pretty inexpensive to begin with. But, if you’re looking for something even cheaper, check out this pooper scooper from Frisco that comes in at just around $10. This simply-made scooper uses durable plastic with jagged teeth and added spring for effortless, mess-free clean-up no matter the terrain. As expected given the long arm, there is no bending required.

While all pooper scoopers are relatively long, nothing is comparable to this scooper from ienjoyed. With a 28-inch length in total, this scooper picks up doggy doo-doo while keeping your face as far as it can be from the mess down below. Most scoopers you see are around four inches shorter at 24-inches total, and you’ll be surprised what the added four will do to your poop-picking experience. The device is also incredibly easy to clean and snaps shut so no poop falls out on your walk to the trash bin. 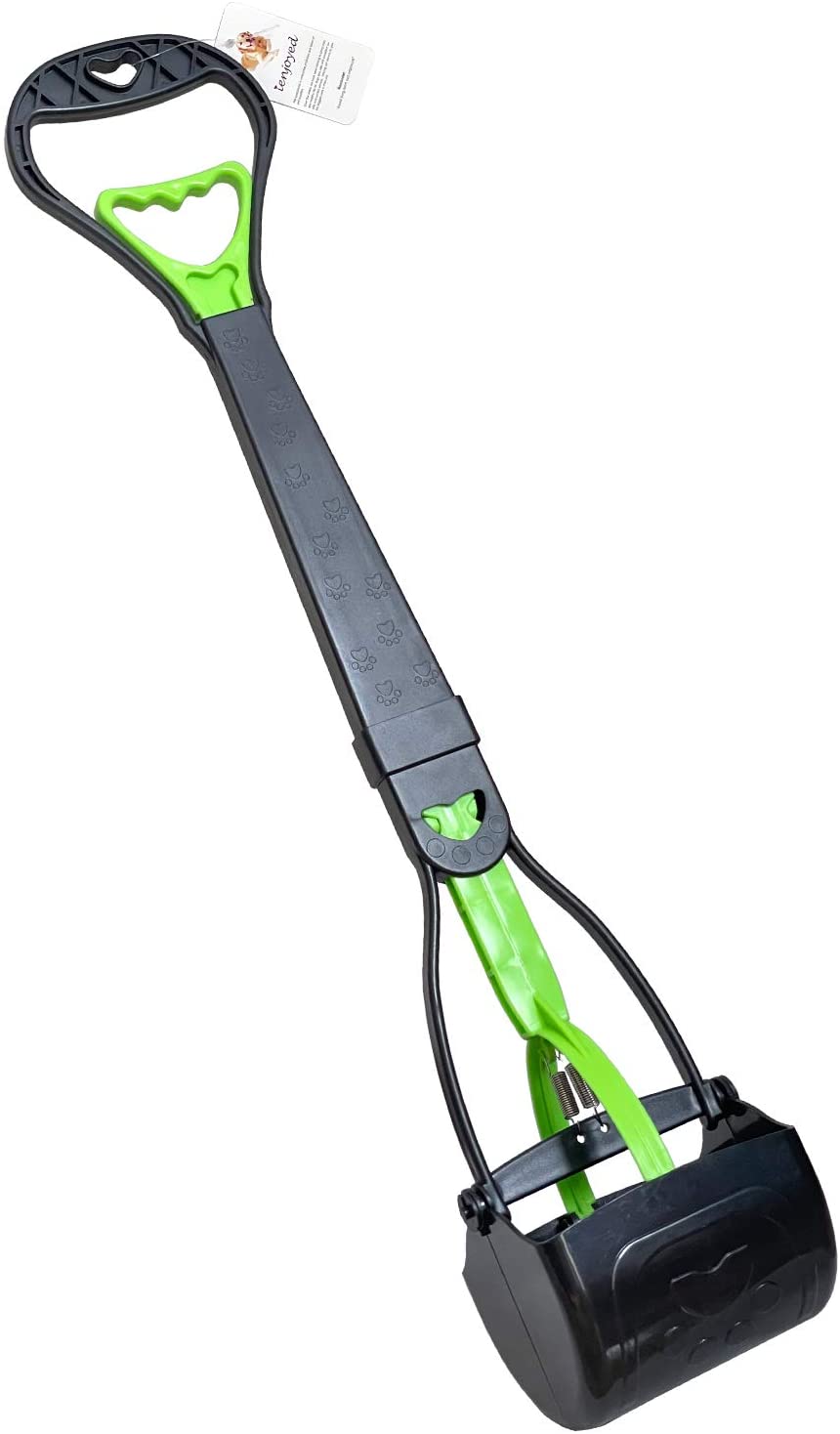 If you’ve used a pooper scooper in the past, you’re most likely tired of one thing: cheesy, easily breakable plastic. Thankfully, all of the pooper scoopers on this list use high-quality plastics that are hard to tamper with. As one of the thickest, most sturdy scoopers on our list, this non-breakable scooper from Balhvit is surely one you can’t pass up. This pooper scooper is as easy as it gets, simply scoop and you’re good to go. The grass stays green. The plastic used is made with might and is sure to last you years upon years. 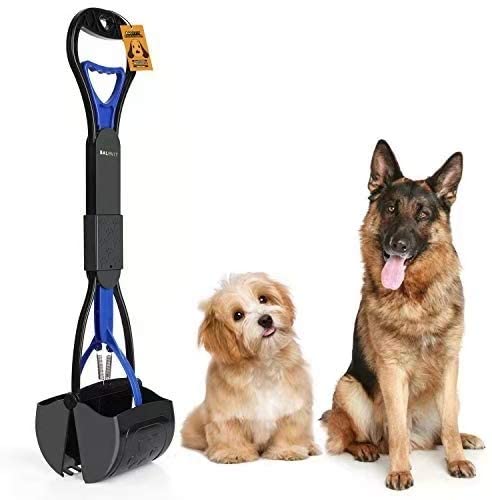 Alright, you caught us. The majority of these pooper scoopers are from Amazon. But, this scooper is quite literally from Amazon. This scooper from Amazon Basics is a tinier option made for smaller stools from tinier pups. It’s made with both PP and ABS plastic for added strength and, of course, a lightweight hold. It works on all surfaces so no matter where your doggo goes doo-doo, you’ll be able to pick it up with no problem.

While this might not look a ton like your average pooper scooper, the Petmate Arm & Hammer Swivel Bin & Rake Pooper Scooper is one of the highest-rated pooper scoopers you can snag on Amazon. For real, this puppy has over 60,000 reviews and counting. Ditch the classic scooper for this large capacity scooper that easily rakes poop off of the grass into the provided bagged basin. The bags provided are two times thicker than your average grocery bag, so you won’t have to deal with any unwanted leaks or bag breakage. This is an ideal option for folks that let their pup(s) roam around in the backyard and clean their doody in larger capacities.

The only issue with pooper scoopers? They aren’t exactly mobile. For example, if you’re bringing your doggo on a longer walk (something that isn’t to the corner and back), a pooper scooper wouldn’t necessarily be the right thing to carry your entire time. It would become quite the hassle. Thankfully, for portability’s sake, the DogBuddy Pooper Scooper exists. This handheld scooper attaches to your dog’s leash so owners can easily bend down and pick up doo-doo once their pup does its business. It doesn’t have the long arm like most scoopers, so you will have to bend. But, hey, at least you can bring this one places! 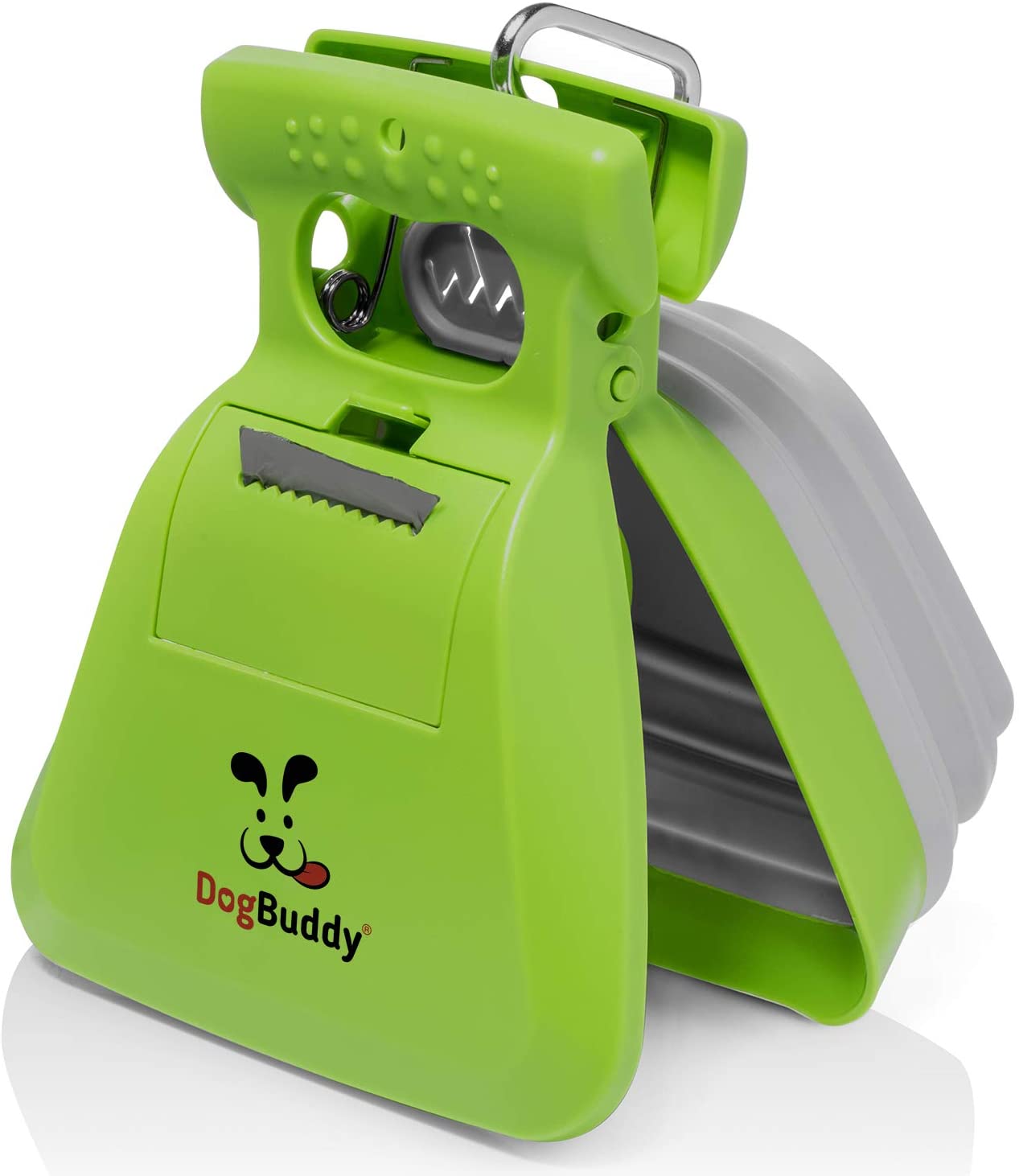 House Gone to The Dogs? These Pet Deodorizers Will Help