Living and working in a 450-square-foot studio in Los Angeles has put me at constant war with dust bunnies. It’s a seemingly neverending battle. When I think I have them on the ropes, I wake up the next morning to find they’re advancing on all fronts. And when they gain ground, my allergies take quite the hit.

Let me be clear though, I do vacuum. I’m not a barbarian. But, unfortunately, vacuuming falls into a cleaning activity that is somehow always easier to do “tomorrow.” And while “tomorrow” rarely comes, these dust bunnies are always on the move.

So when dser reached out to me asking to test their latest robot vacuum cleaner, the RoboGeek 23T, it should come as no surprise that I was excited to comply. Finally, I too could boss around a gigantic Oreo as it ping-ponged around my apartment sucking up dust.

SPY has written about various Roomba models before, but like a lot of people, a $1,000 vacuum cleaner is out of my price range. Still, I really like the idea of a house robot that does my vacuuming for me.

So, after a week with the RoboGeek 23T, how do I feel? Read on for my full review.

What I Love About the RoboGeek 23T

The robot vacuum arrived on a sunny Thursday afternoon. Within 10 minutes of opening the box, it was bouncing around my apartment. As far as user experiences go, that’s a huge win in my book. dser did a fantastic job of making the RoboGeek user-friendly. Now, it should be stated that I work for a lifestyle site and know my way around gadgets and gizmos. However, anyone could get this thing up and cleaning with minimal effort. I simply opened up the box, took out the vacuum, added on the two side sweeper brushes and set up the charging dock. After that (and some mild rearranging of wires and plants as per dser’s easy to follow instructions) my robot was off and running.

The RoboGeek 23T works surprisingly well. I wouldn’t quite classify it under the “set it and forget it” category, but it’s about as close to that as a robotic vacuum could be. The machine comes with a remote (as well as an accompanying app) and has a few different presets. There is Auto (aka bouncing into things and cleaning along the way), Edge (which follows the outer perimeter of your place), Spot (which will swirl around a single focused point), Single Room (which causes your bot to wind back and forth through a room) and Max (which is a full-power add-on to any of the already mentioned modes). You can even schedule a time for you bot to start cleaning on its own.

Also, the remote comes with arrows so you can control your robot like a video game, which is ultimately more fun than practical. 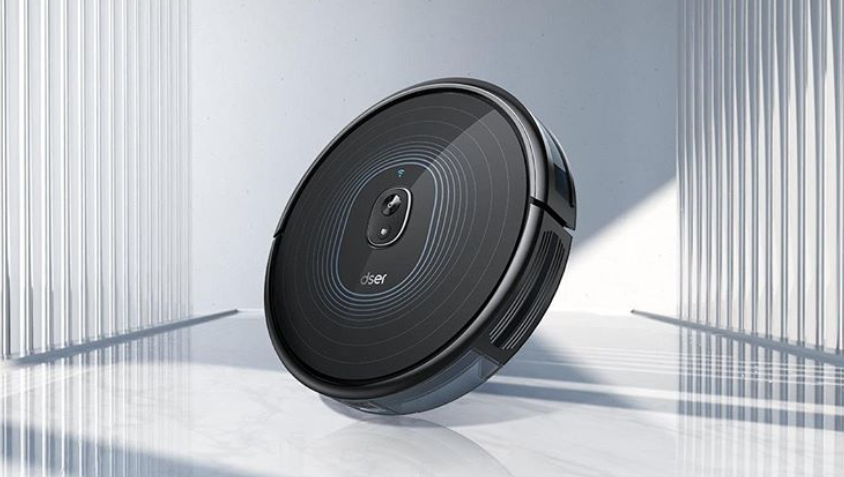 I loved that I could set the device on Auto and move on to other tasks. My apartment is shaped like a horseshoe with tables, chairs and a couch scattered throughout. In other words, it’s a tricky place to maneuver. And yet, this gigantic hockey puck was able to navigate from bedside to kitchen to bathroom and back, all with minimal involvement from me.

While on Auto, the RoboGeek just bounces from surface to surface. It doesn’t approach anything at ramming speed, be it the foot of a table or the foot of a person. All it will ever do is lightly tap a stationary object and then reflect elsewhere. So far it hasn’t knocked a single thing off my coffee table or damaged any of my stuff, and I can’t see it happening in the future.

As for the cleaning ability, the RoboGeek excels. The machine is powered by a hefty 2600mAh battery that will give it around 100 minutes of run time, though it never needed to run that long considering the size of my place. Likewise, the suction power on this thing is impressive. The device boasts up to 2,200Pa, which is enough pressure to handle the crumbs, dust and hair that most often dirties up my apartment.

What I Didn’t Love About the RoboGeek 23T

Though I could control the device with the remote to reach every nook and cranny of my apartment, that’s not why somebody gets a robot vacuum. They get it so they can have it clean while doing other things. And though the RoboGeek does a great job bouncing around and swallowing up dust bunnies in its wake, it doesn’t clean every single nook and cranny perfectly.

As mentioned earlier, the RoboGeek cleans as it ping-pongs from object to object. For the most part, this is great. However, it’s entirely possible that it will miss a spot (or two) as it goes on its merry way. And if you’re looking for a device that can intelligently map out your apartment and suck up every last damn dust bunny, this isn’t it. It was a little frustrating to realize this, but for the price, you can’t truly expect that level of autonomous cleaning.

Another thing I found curious was RoboGeek’s logic. It didn’t happen often, but there were a few times where the RoboGeek refused to bounce away from a table or chair and ended up continually trying to either go through metal or around it, which didn’t work in either case. It kept bumping, then slightly readjusting, then bumping again. This was never anything more than a mere annoyance, but it was still curious to watch and required human interference to set the RoboGeek back on track again. Again, I don’t expect this thing to evolve and take my job anytime soon, but I couldn’t understand why it would so easily bounce away from some things, and try to inexplicably plow through others.

Minor gripes aside, I’m definitely a fan. After spending a week with the RoboGeek, I’ve realized that this vacuum offers a different type of cleaning than your favorite stick or stand-up vacuum. That is to say, a robot vacuum is designed for maintenance and upkeep. I find myself letting it roam every other day, mostly because I can and because it takes no effort on my part (outside of adjusting chairs or wires here and there). And because of that, the dust bunnies and I have all but signed a peace treaty. 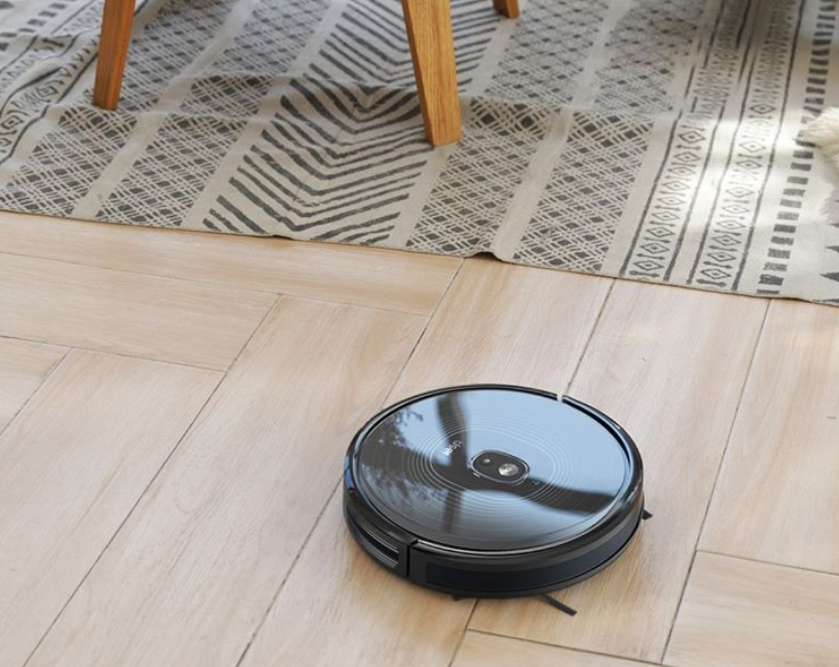 At this point, you’re likely wondering if you should buy it. To that I say: what are you looking for and how do you value your time? If you want to throw out your vacuum cleaner for good, and completely outsource that part of your life to a robot, there are smarter robot vacuums on the market. Perhaps iRobot’s Roomba s9+ can handle that, but for $1,099.00 before tax, you’re paying for that level of detail. But if you’re sick of the daily upkeep of maintaining floors and carpets, the RoboGeek 23T offers an incredibly compelling package. The price point of $230 is nothing to scoff at, but if you use it as intended (every other day or every few days), you’ll quickly find that it’s worth the investment.

But, let it be known, I still own a regular vacuum. And when I spill something or find a corner harboring said dust bunnies, I’ll use my regular, cheap-o vacuum I got off of Amazon for $30. But for the daily maintenance and daily dust and crumb buildup that we all have in our apartments, the RoboGeek 23T is more than worth it.

Not Convinced by the RoboGeek? Try One of the Other Best Robot Vacuums