A winter wonderland is all fun and games until you need to get somewhere. Then, the mound of snow sitting on your walkway can make getting to your car feel like summiting K2. Fortunately, there are a variety of easy ways to clear snow and ice from your driveways and walkways. And it doesn’t have to be as backbreaking as a shovel or as expensive as a snowblower. In fact, there’s a perfect tool that splits the difference: an electric snow shovel.

There are a few factors to look at when shopping for an electric snow shovel. Electric snow shovels will display their clearing width; standard widths include 10, 12, and 13 inches. This refers to the width of the area that the snow shovel clears. A wider range can be better for your driveway, for example, while you might instead opt for a narrower clearing width for a small walkway.

If you’re looking for a simple and reliable tool to make quick work of the snow on your walkway or driveway, we’ve rounded up some of the best electric snow shovels to buy right now.

Greenworks electric snow shovel is an economical pick if you’re willing to go for a corded unit. It has an 8 amp motor that quickly and easily turns on with the push of a button, and it’s capable of clearing up to 300 pounds of snow per minute. The unit clocks in at a meager 14 pounds, meaning anyone in the family can use it.

Toro’s cordless electric snow shovel is a robust unit that makes snow clearing a breeze. It throws snow up to 25 feet, compared with other options that throw snow up to 20 feet. The shovel has a brushless motor for better efficiency with less friction. Plus, you can switch between two-speed modes. It’s worth noting that the battery is not included in this kit. 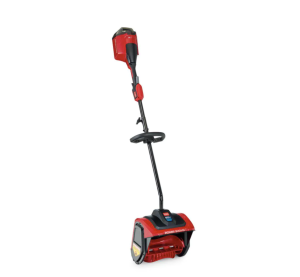 In addition to their cordless options, Snow Joe also makes corded electric shovels. It has a 13-inch clearing range and a 10 amp motor that allows it to clear up to 400 pounds of snow per minute. It’s worth noting that the power cord is designed to be plugged into an extension cord, so it won’t be long enough to use on its own. 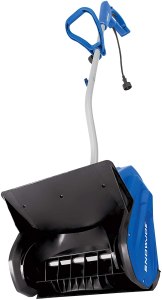 If you’d prefer a cordless option that allows you to work in harder-to-reach areas, Snow Joe makes some of the best value electric shovels and snow removal equipment. Plus, the name is just fun to say. This kit comes with pretty much everything you need. The tool, battery dock and battery are all included, and there’s even a cover for storage. It has a 10″ clearing range, making it best suited for smaller walkways. 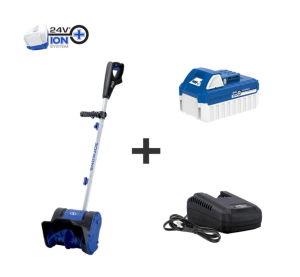 This kit comes from Kobalt, Lowe’s in-house power tool brand. The complete kit comes with the accessories you need to get to work quickly. One battery is included, in addition to the charging dock. It has a 12″ clearing width. 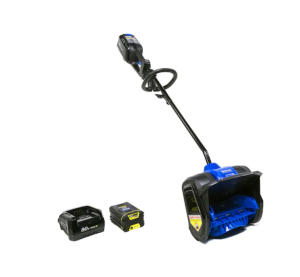 Buy Now
How To Use Ice Melt (Without Destroying Your Driveway)