Hanging a family photo or mounting a TV on a wall is a potentially problematic process. For starters, a decision needs to be made on where exactly the best spot for said picture/TV bracket is, which can be cause enough for heated discussion. Then, once that decision is made, you have to actually hang the item on the wall. This is a task, which if done incorrectly may result in a host of embarrassing and sometimes potentially life-threatening situations. That’s why it’s paramount to locate wall studs, electrical wires and pipes before hanging anything on the wall. Fortunately, the best stud finders do this quickly and reliably, helping you avoid any accidental shocks, falls or floods.

A stud finder can help you avoid giving your wall an unappealing, chickenpox-like appearance filled with hundreds of “tester” holes. This device will help you locate studs and give you a precision guide on where to place your nails or drill your holes. Confidently finding the stud means no unexpected accidents.

How To Use a Stud Finder

While stud finders do come in numerous sizes, styles and designs, the general principles of how to use a stud finder remain the same. Follow this quick guide if you’re new to using these essential DIY aids.

The best stud finder for you will depend on what you want to use it for. If you’re just doing a quick, DIY job, you may be able to get by with a cheap stud finder that costs less than $10. However, for professionals, it may be worth investing in a device with more bells and whistles, such as greater depth capabilities and a clearer display.

Before you hang anything, make sure you have a reliable stud finder to help preserve your walls and keep you safe during your DIY work. Below, you’ll find the best stud finders for every type of job, whether you’re an aspiring DIY master or a professional replacing old equipment.

Easy to use and featuring the added benefit of a two-way level, the CH Hanson Magnetic Stud Finder is perfect for the weekend handyman. The CH Hanson is so small that it can fit in your pocket, making it easy to access. The way it works is that it uses a powerful magnet that finds nails in the stud. Plus, since it affixes to the walls using the magnets, you can use it hands-free. The two-way level helps with proper placement.

The CRAFTSMAN Stud Finder is capable of detecting studs through wallpaper and fabric-covered walls up to ¾-inch deep. It uses edge detection tech and an accompanying beeping sound to locate either metal or wooden studs. The compact size is easily stored in tool boxes, while the finder’s shock-resistant, water-resistant body offers long-term durability. It runs on a nine-volt battery which is not included in the pack.

The StudBuddy is the kind of ridiculously simple tool that you’ll wish you’d heard of a long time ago. The small plastic tool is only 5 inches long and weighs less than 2 ounces. There are no batteries or electronic parts — it simply uses strong magnets to locate nails and screws in the studs. The magnets in this lightweight tool make it able to “stick” to the wall once it finds the studs, so you can leave it as a place marker while you gather hammers and other tools.

If you’re searching for screws, nails or a metallic stud, the MagnetPAL Magnetic Wall Stud Finder simplifies the situation. Using a strong magnet, this compact device will become attracted to or even stay attached to your walls when metal is detected. Simply hover the finder over the wall, and let it guide you. Furthermore, this tiny tool can also be used as a smart way to hide your keys or separate metallic items from non-metallic ones. 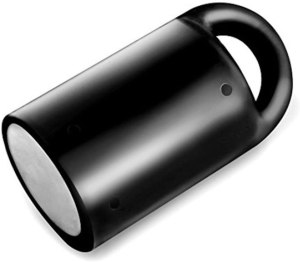 This affordable sensor from Folai is designed to help you find different kinds of materials that might be in your walls, allowing you to avoid drilling into AC wire or metal pipes. It also has a feature to help you find the center of the stud, so you can have the most secure hold when mounting heavy shelving. The beep function also indicates when you’re close to your target. Plus, the backlit display makes it easier to use in poor lighting conditions. 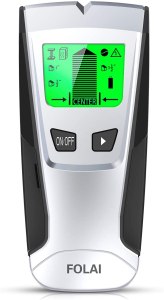 The Anzid Stud Finder Wall Scanner is a versatile device which offers five different scanning modes for detecting wood, metal studs, joists, beams, metal pipes, rebar and live AC wires. It is capable of detecting studs found between 0.5 and 2.36 inches deep and includes a handy, audible alarm to let you know when it has been successful. This is also combined with an easy-to-follow center indicator display on the screen. Additionally, the device sports an ergonomic design which is comfortable in hand and runs on a single, nine-volt battery, which is included. 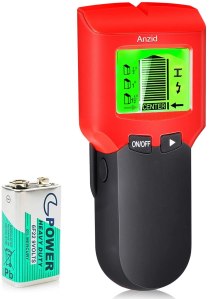 The JAXWQ Stud Finder Wall Scanner is another popular stud-finding option. It comes with a nine-volt battery which is required to power the device. Furthermore, it is capable of five different scanning modes, depending on the depth of your stud, and it uses intelligent, microprocessor chip detection for impressively accurate results. You’ll be able to locate the edges of studs, joists, pipes and live wires which are indicated by a continuous beeping and on-screen indication of how close to the center you are. 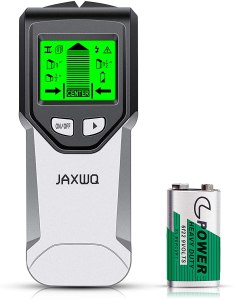 Whether you’re mounting a TV or hanging shelves in a garage, avoid wires with the Zircon, which can detect the edges of wood and metal studs. The Zircon also alerts users of live wires, with Wire Warning detection able to locate a live wire through two inches of material. The Zircon features the StudScan mode, which locates wood or metal studs up to 0.75 inches deep, while the DeepScan mode goes 1.5 inches deep. The SpotLite Pointer shines an arrow-shaped light on the wall to easily mark the target.

With a maximum detection depth of four inches, the TACKLIFE Stud Finder Upgraded Wall Scanner is a powerful yet moderately priced way to find wall studs, wires and pipes. This upgraded model provides a percentage signal strength and indicates the presence or absence of objects using a green, orange and red lighting system. It also comes in a choice of blue or black and runs on a single, nine-volt battery, which is included in the pack. 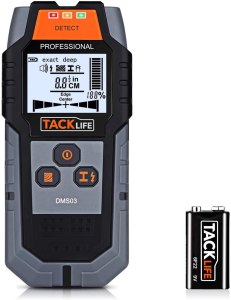 With a simple design and easy-to-follow stud-indication display, it’s little wonder the Franklin Sensors ProSensor T9 Professional Stud Finder is a popular pick. The device includes eight individual sensors which detect studs up to 1.4 inches deep. Once detected, the smart row of LED lights provide a visual representation of where your stud is located. The ergonomic, always-on device can be used for either metal or wood and requires no calibration for added convenience. 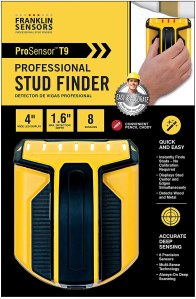 Tavool’s electronic stud finder is a versatile option for beginners and pros alike. The precise sensor is designed to distinguish between different kinds of objects in your walls, ensuring that you drill where you should (and preventing you from drilling where you shouldn’t). The device helps locate AC wires and metal pipes and tells you what you’re near using the graphic display screen, so you can avoid drilling into those areas.

The Franklin Sensors FS710PROProSensor 710+ Professional Stud Finder’s brilliance can be found within its deceptively simple design. The ergonomic device is comfortable in hand and incorporates an integrated ruler and built-in bubble level for greater versatility on the job. The grip also includes a button for press-and-scan, stud-identification action. And, for greater precision and breadth of sensing, the stud-finding sensor, which can detect both metal and wooden studs, stretches across 21 inches and includes 13 individual sensors. 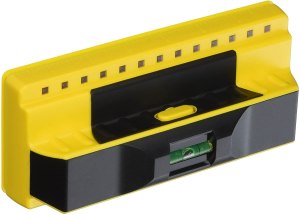 The ProSensor is a great option when looking for a stud in drywall or other smooth walls. The ProSensor uses advanced multi-sense technology and can identify the position of multiple studs simultaneously and deep scanning up to 1.5 inches is available. We like that the ProSensor doesn’t require calibration. 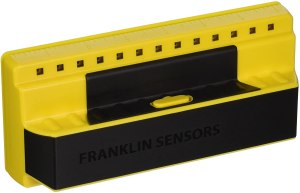 If you want something that can perform multiple handy functions in one, consider this option from the perennially reliable Black + Decker. The two-in-one tool is a line laser and stud finder. This helps ensure that you’ll mount shelving or frames in the right place, and whatever you mount will also be straight, too. The auto-leveler ensures the guide lasers are level, and a visual display lets you know when a stud is found. 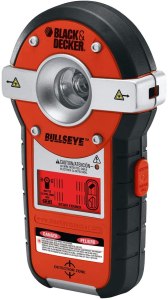