From arts and crafts, to home repairs, to DIY projects, glue guns have a seemingly endless list of uses. But finding a glue gun that won’t leave you with heat burns, strings of messy, gooey glue, or a dried up piece of plastic glue that isn’t strong enough to even hold two pieces of tissue together isn’t always easy. That’s why we’ve rounded up three of our favorite glue guns that can be used for projects big and small.

Whether you like to decorate ornaments in your spare time, work on DIY projects with wood or plastic around the home, or you’ve started a small business making jewelry, glue guns can be a massive help in safely securing items together. Having a reliable and dependable hot glue gun on hand at home, work or school can be hugely beneficial, from fixing glasses and resizing rings, to fixing furniture, repairing old mugs, creating a non-slip based for rugs, and much more.

Add Comment
1 Person Commenting
chalkeddesigns
2 years
Those are some serious glue guns! I bought mine at the dollar store! I think I need...

When using a glue gun, it’s important to not try to pull a half-used stick of glue out of the gun. Instead, users should use a new stick of glue to push the old stick through, creating one seamless piece of glue. Stands are essential with glue guns and all three options on our list include stands, which will eliminate the chance of the guns burning your fingers or whatever surface you’re resting the gun on when not in use. Though these glue guns are user-friendly and straightforward, we never recommend children using glue guns without parent supervision.

Add Comment
1 Person Commenting
chalkeddesigns
2 years
Those are some serious glue guns! I bought mine at the dollar store! I think I need…

For more on glue guns for big and small projects, check out our top three picks below.

Heating up in just one minute, the Cobiz is a full-sized heavy duty hot glue gun with 60/100 Watts of power. The Cobiz is great for arts and crafts and home repairs, giving users the option of 60 Watts for a thinner and cooler glue stream, better for small projects like placing beads, or 100 Watts, with the thicker and stronger stream better for large jobs like bonding pieces of wood together.

Pros: The Cobiz has a fast preheating time of one to three minutes and a long 140 cm cord that makes it easy to plug in just about anywhere. The glue holder has a durable plastic ring and the tip is made with fine copper, which heats up faster than the typical aluminum alloy tip found in most glue guns. We like that the Cobiz also comes with two rubber finger protectors and 10 glue sticks.

Cons: The Cobiz does not have an on and off switch and must be unplugged to turn off. Some customers found the gun easily tipped over when resting on the stand. 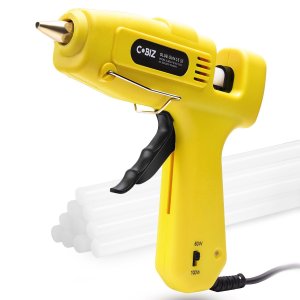 With 50 percent more power than standard glue guns, you can break free from wires with the Surebonder 60-Watt Cordless High Temperature Glue Gun, which has an added safety feature thanks to its auto shutoff.

Pros: Whether you’re working outside or have limited access to outlets, the Surebonder frees users thanks to its cordless design. The glue gun comes with Ryobi 18V batteries and has a 30-minute automatic shutoff feature for added safety. The 60-Watt glue gun has dual temperature options and an ergonomic rubber trigger for comfort. The power light lets you know when the glue gun is active and the wire stand is detachable.

Cons: The Surebonder is only heating when on its base and some customers found it inconvenient to continually replace the gun on its base to heat the glue between passes. Unlike the other two options, the Surebonder doesn’t come with glue sticks. 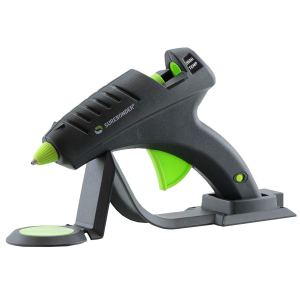 Pros: The Blusmart is mini but mighty, with the glue gun able to secure wood, ceramics, fabric, plastic and more. Heating quickly in just two to five minutes, the Blusmart is made with Positive Temperature Coefficient, which stops the gun from overheating. Unlike the Cobiz, the Blusmart has an on/off switch. Backed by a one-year warranty, we also like that the Blusmart comes with 30 glue sticks.

Cons: At 20 Watts, the Blusmart is not as powerful as the first two glue guns on our list and better suited for small projects. Some customers noted that the on/off switch can easily be knocked accidentally when holding the glue gun, unintentionally turning it off. 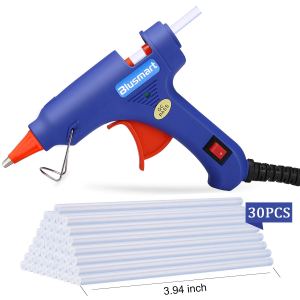