The proper gun safe serves several essential purposes. Not only does it protect some very important personal property, but it prevents that property from individuals who might misunderstand its very real dangers. Available in different sizes and offering different manners of security, all of the available varieties of gun safes keep your guns in your hands and out of the mitts of the less experienced.

The following collection of options review safes holding multiple weapons in the best possible security. That leaves you to select the aesthetics and price level that works best for you and your guns.

The best rated Moutec Large Rifle Safe packs in all of the essential elements. Its steel construction offers a no-pry door surface with both an electronic keypad and traditional key locks. If anyone tries to get access without the right code, an alarm sounds to warn the owner. The Moutec will hold up to five rifles or shotguns and includes a separate lockbox inside the safe to hold pistols, ammo, cash and other valuables — all for less than $400.

The Stack-On 18 gun unit offers a unique interior design, including multiple separate shelves to diversity its function. It’ll hold 18 weapons in its steel construction, while its shelves are both adjustable and removable. The safe becomes a bit of a Swiss Army box as its owner can personalize the safe to hold various types of valuables beyond its weaponized contents. It uses a three-point locking system to make sure only its owner gets at the guns. 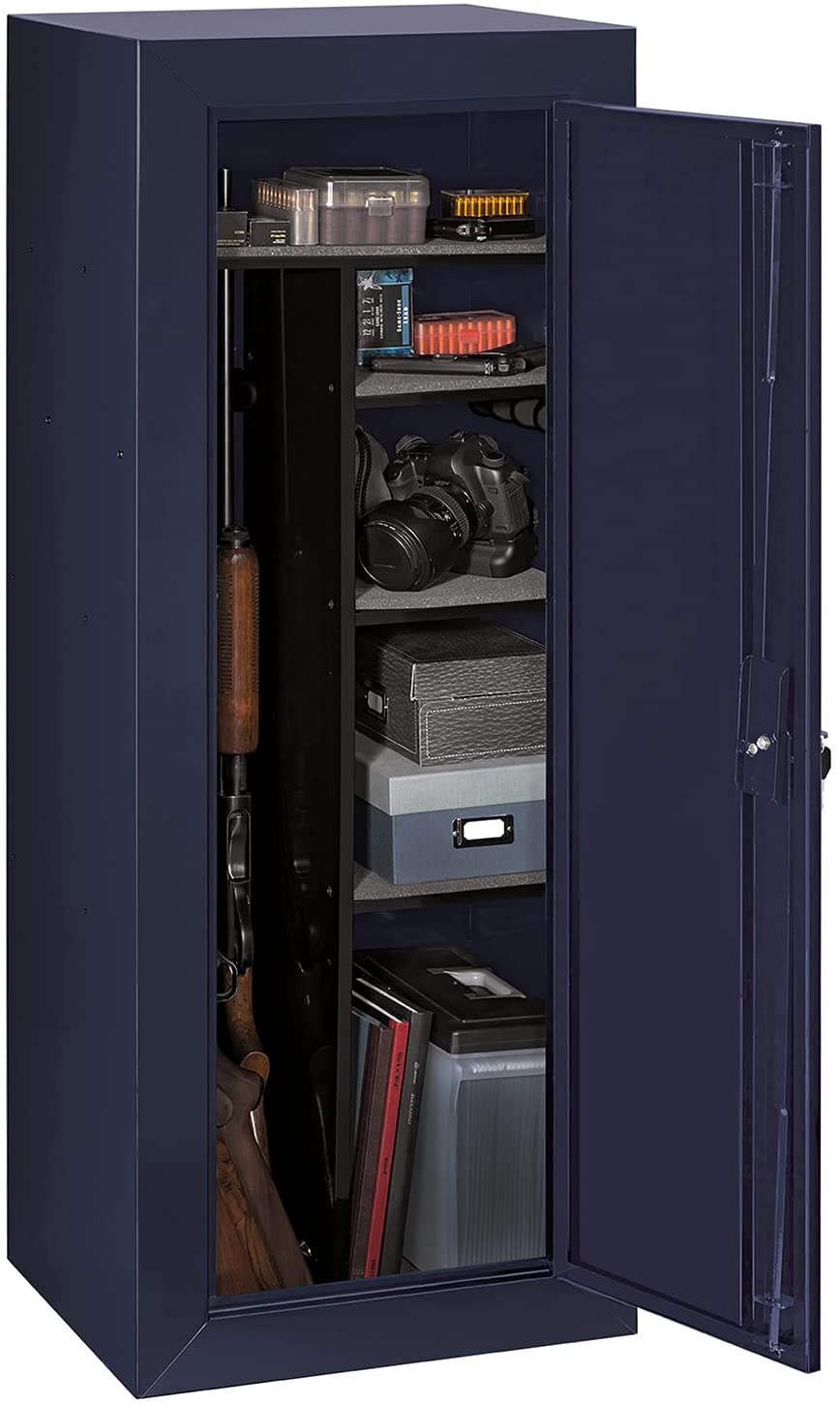 One of the more diverse storage options for gun owners, the REYLEO Rifle Safe can hold between seven and 10 guns (depending on the mix of pistols and long guns the owner includes in his or her collections). Built from steel and including storage space for ammunition or accessories, the Reyleo adds a unique feature of storage pouches allowing the owner to store up to three additional handguns and two ammunition magazines. 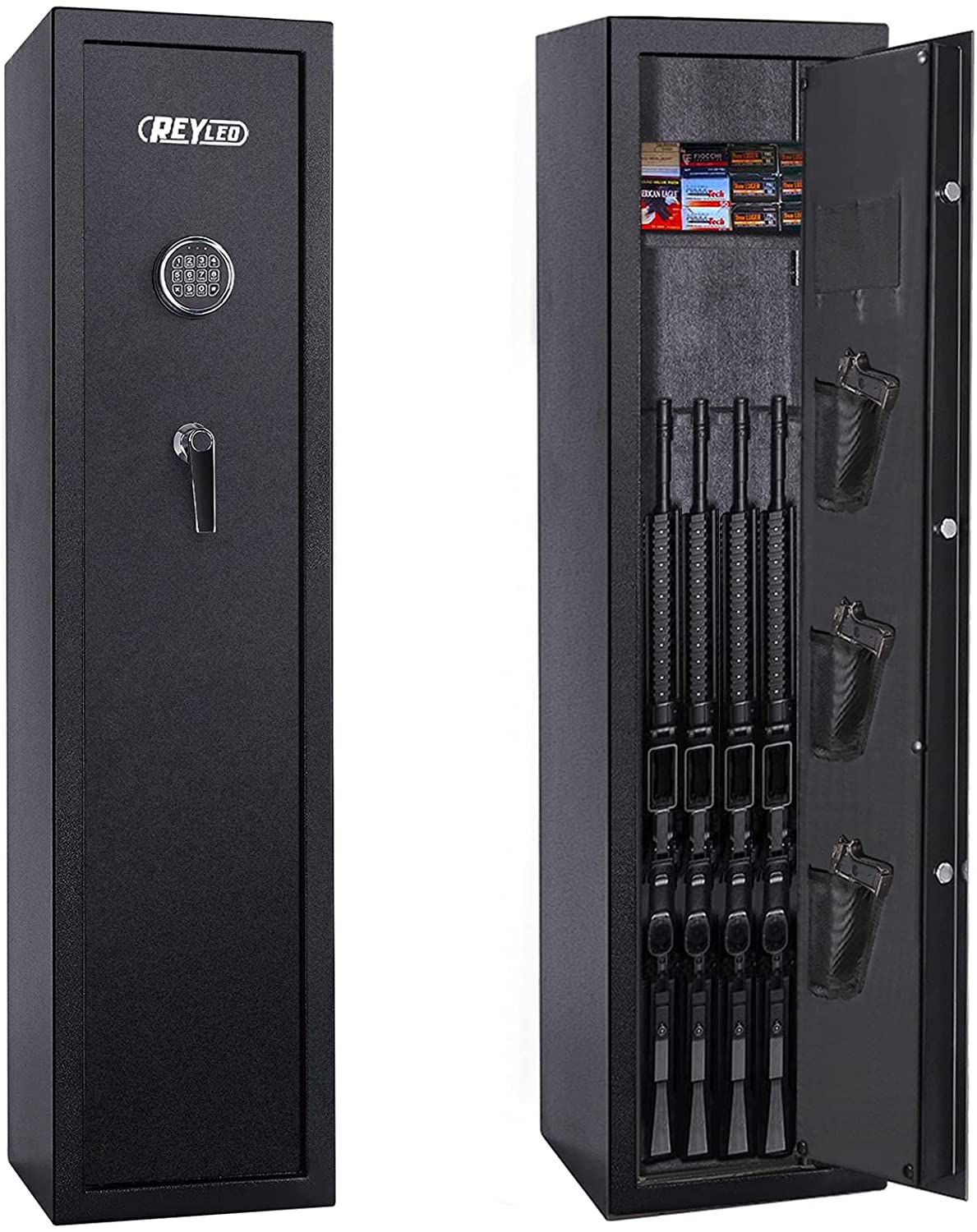 Wide and deep enough to hold the familiar five long guns with plenty of extra space for ammunition and handguns, the Langger Large Gun Safe puts its beef to use with a steel frame and pry-resistance door edge. Depending on the length of the rifles or shotguns the owner includes, the Langger includes a removable storage shelf that can adapt the safe’s interior to hold more valuables. 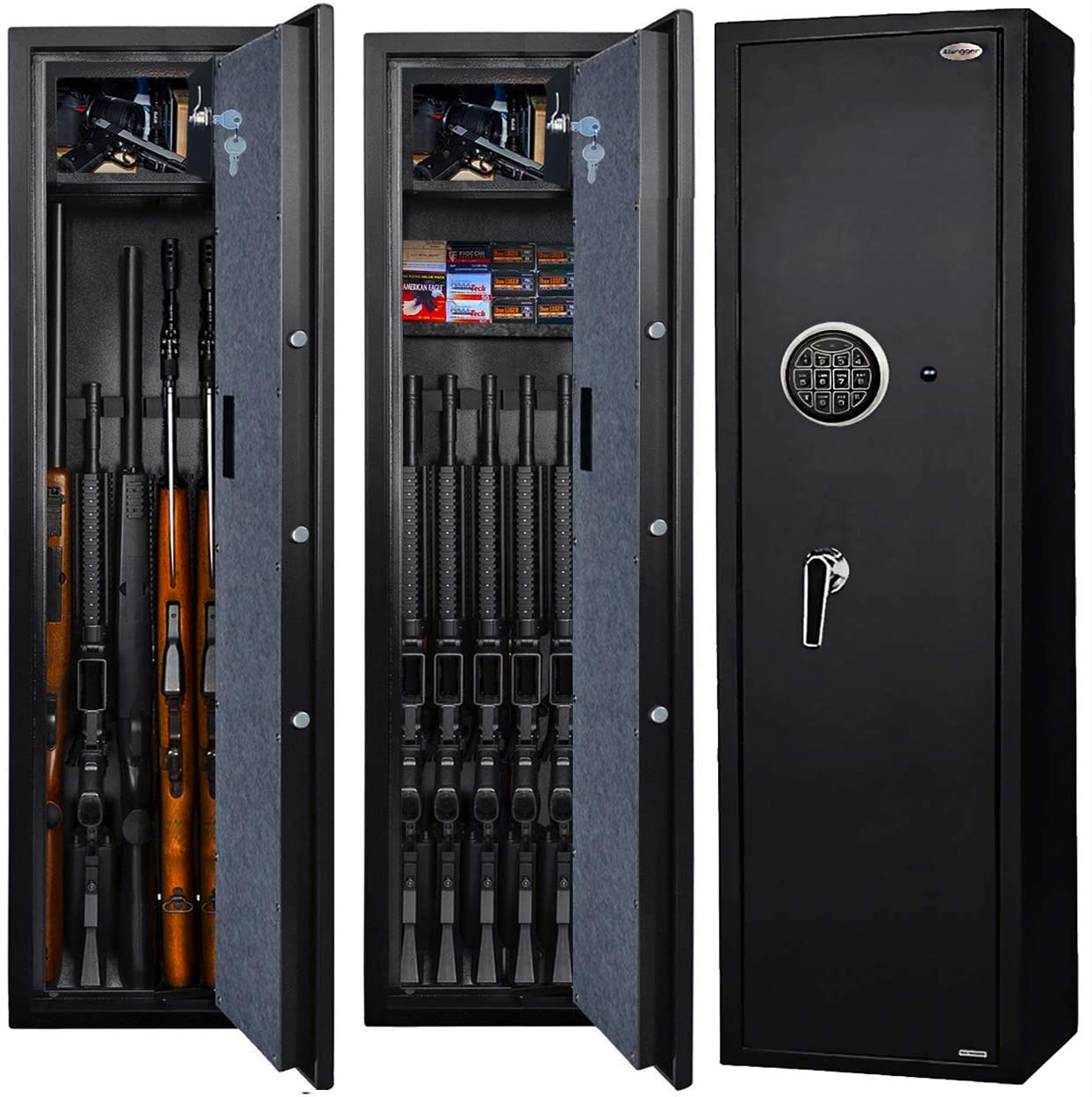 With a width of less than 14 inches, the RPNB Rifle Safe is one of slimmest gun safety options on the market — while remaining tall enough and deep enough to hold five long guns. That thin profile also allows for a separate storage box to hold a handgun and other valuables. Made of steel and locked with a side bolt mechanism accessed by a three to eight-digit code, the safe allows for a double lock with included keys. 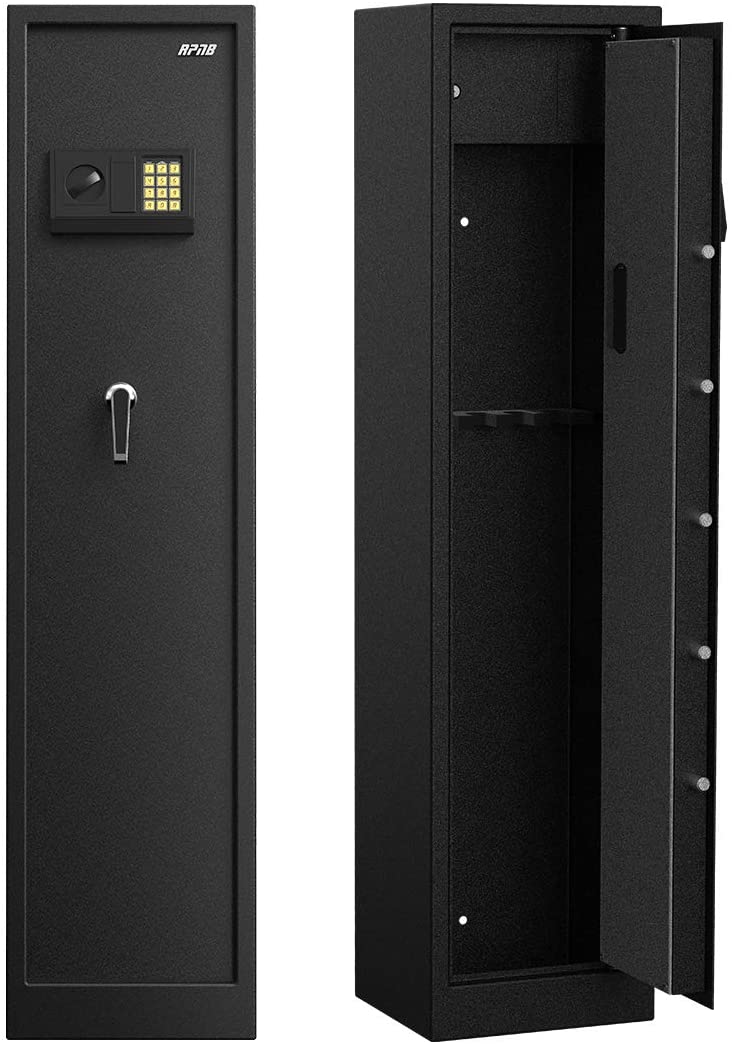 While all of the gun safes here will do the job of protecting your weapons and keeping uninvited hands off of them, few of them are much in the way of looks — always opting for utility over aesthetics. Able to hold more than 30 long guns and four pistols, the steel-reinforced Kodiak has the classic look of an old-time bank safe in its black, lacquered finished. It’s also fire-rated to withstand the heat for 30 minutes. This mix of function and style does outstrip its less attractive cousins in the price department with an MSRP of almost $1,000. 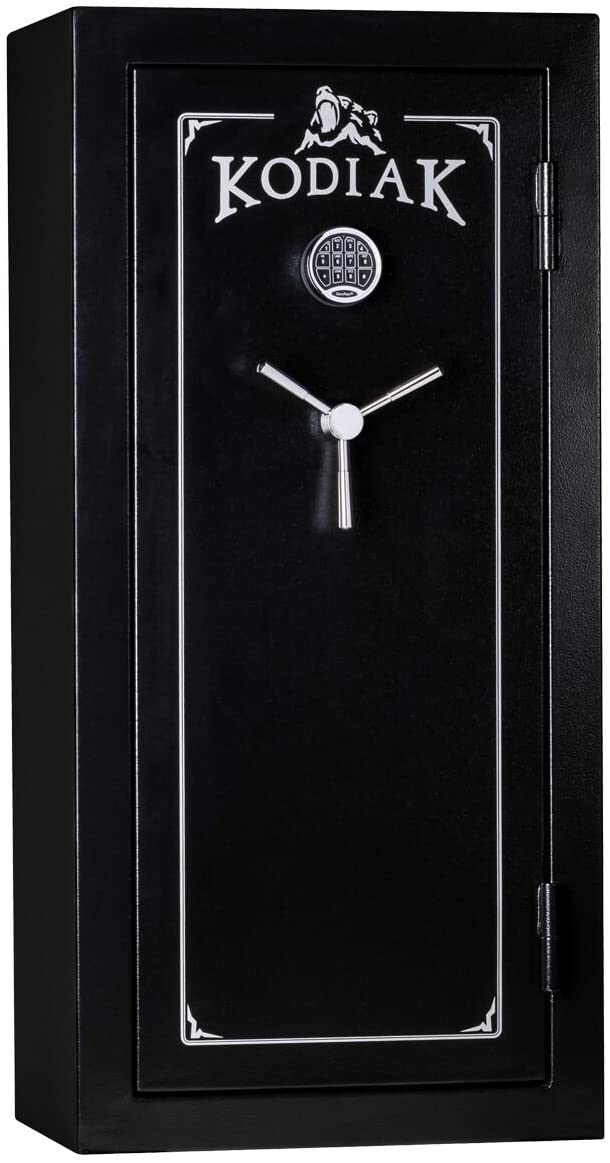 Obviously, not all gun safes have to stand up along the wall or serve as separate pieces of furniture in an owner’s home. This SafeArms Under Bed Gun Safe hides quietly where the Boogeyman used to live and seals tight with digital passcode or traditional key locks. It’s pry-resistance and holds up to three long guns with room left for pistols and other valuables. Owners can slide the gun drawer out from under the bed or move the entire safe out into the open in seconds for quick access. 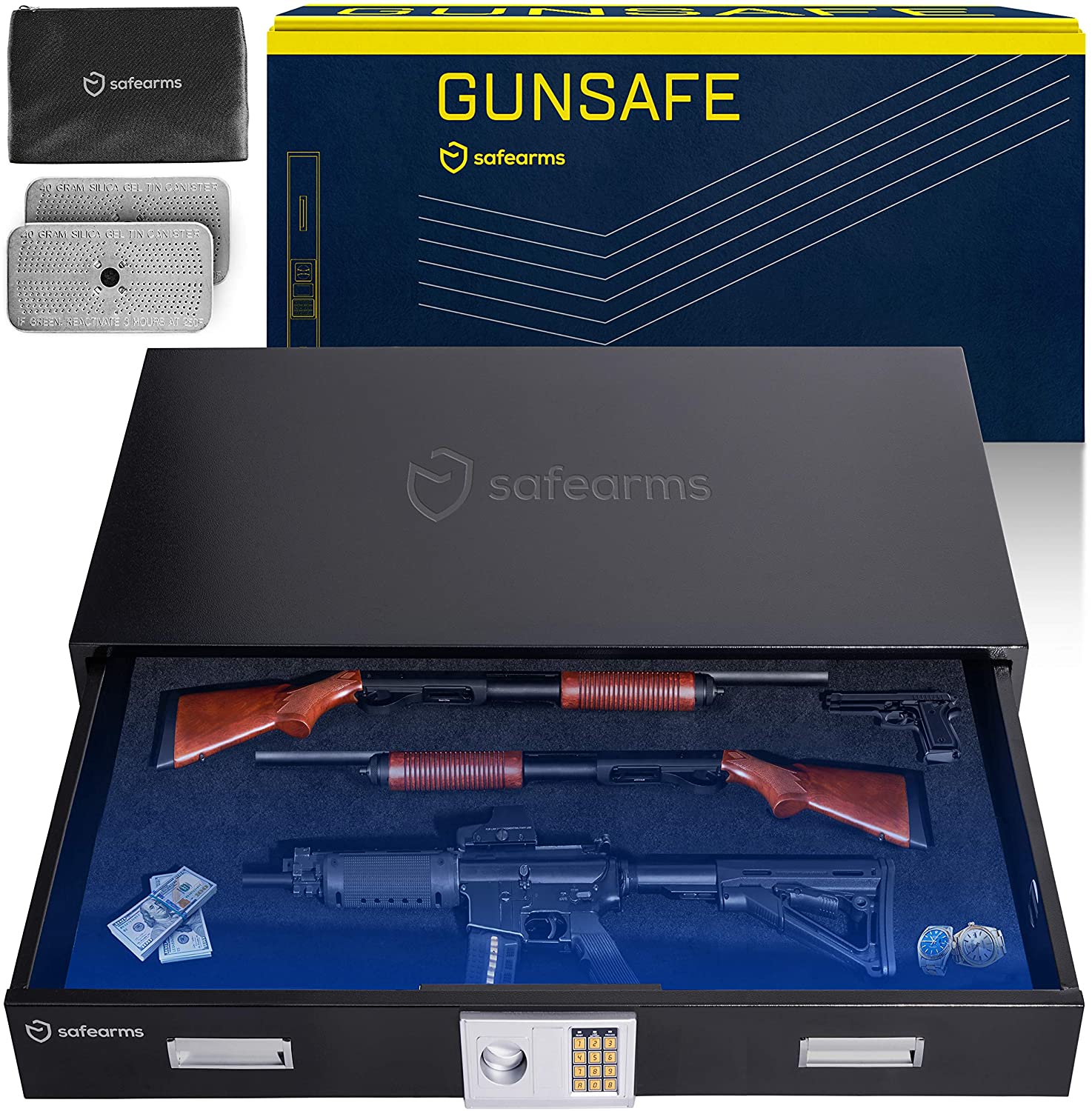 The biggest gun safes for owners without any budget concerns usually resemble bank vaults — installations into rooms of their own. Short of such expensive renovations, any gun owner who wants to buy the king of gun safes can take on the almost $1,500 Kodiak Gun Safe for 52 long guns and eight pistols. Weighing 573 pounds sans weapons, this bear of all gun safes is large enough to enclose its arsenal with room left over for ammunition, scopes and other accessories. 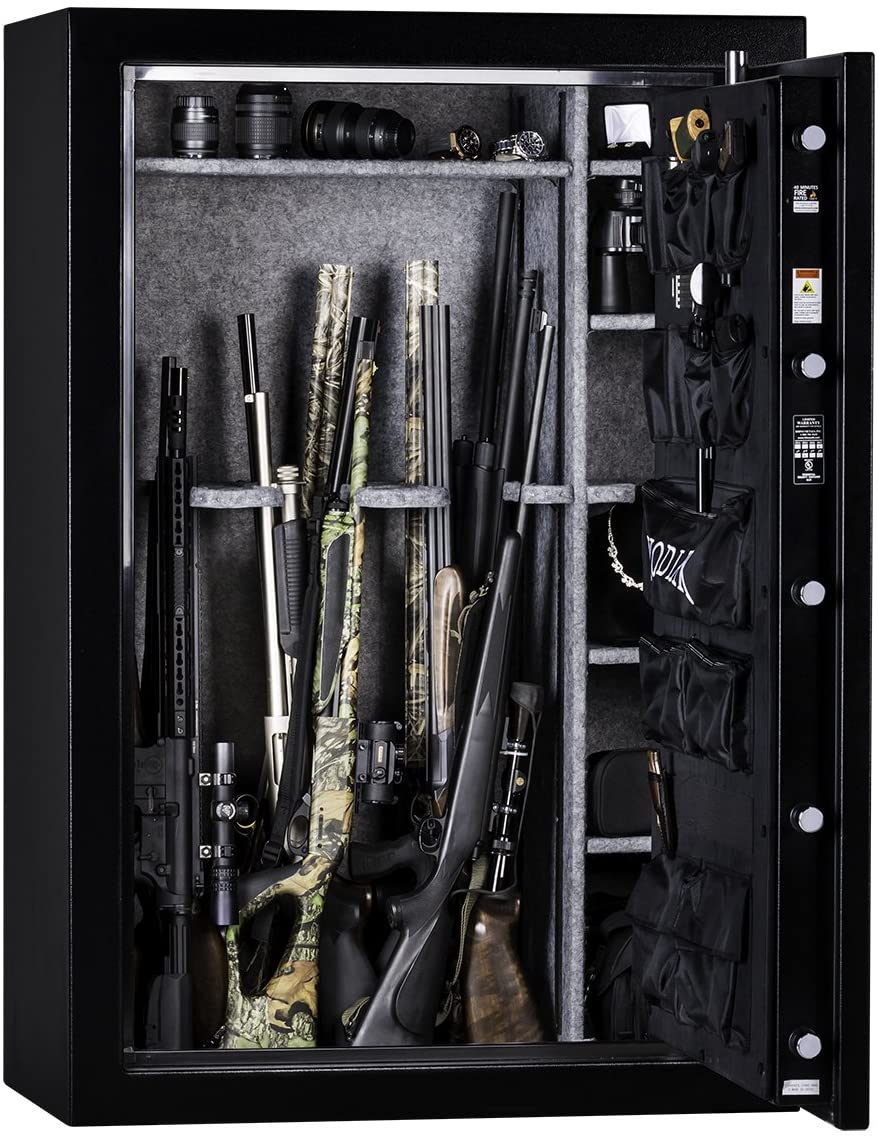 If you primarily need to secure smaller weapons, then you’ll want smaller biometric safes to keep your firearm secure. Below, you’ll find some of the best handgun safes for sale in 2021.

The Moutec Biometric handgun safe is constructed with reinforced steel and offers multiple ways to secure your weapons. You can choose from biometrics via thumbprint, use a key code or rely on a physical key. And if you want maximum security, you can require all three methods in order to unlock the safe. 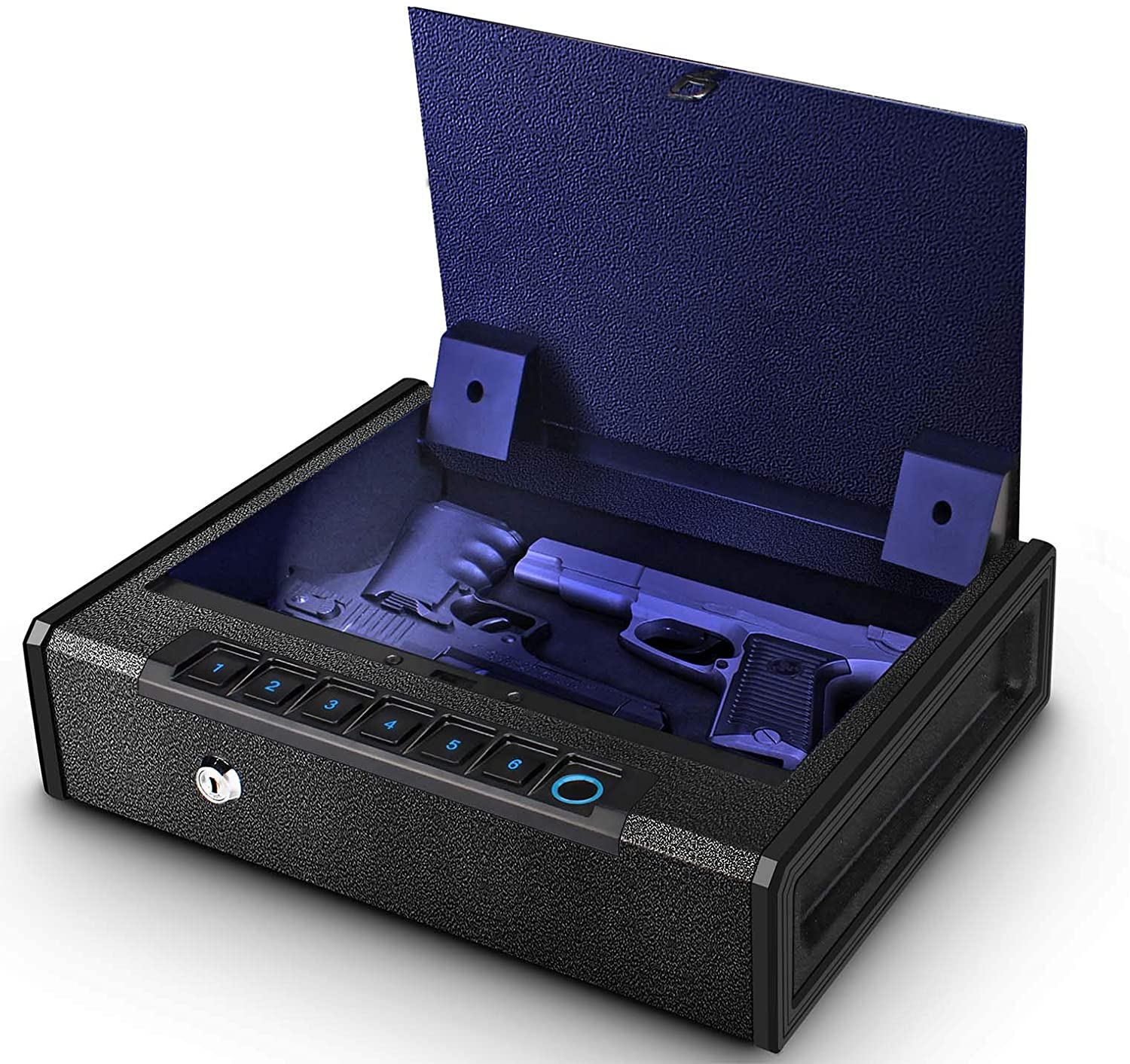 The AweSafe gun safe has a solid steel construction to keep your weapons safe and secure. Once opened, the interior has a soft LED light to allow clear sight even in the dark.  In terms of security, you can lock and unlock this handgun safe via key code or thumbprint. Finally, a gas strut provides for silent opening in case you need to access the gun without alerting anyone else in the vicinity. 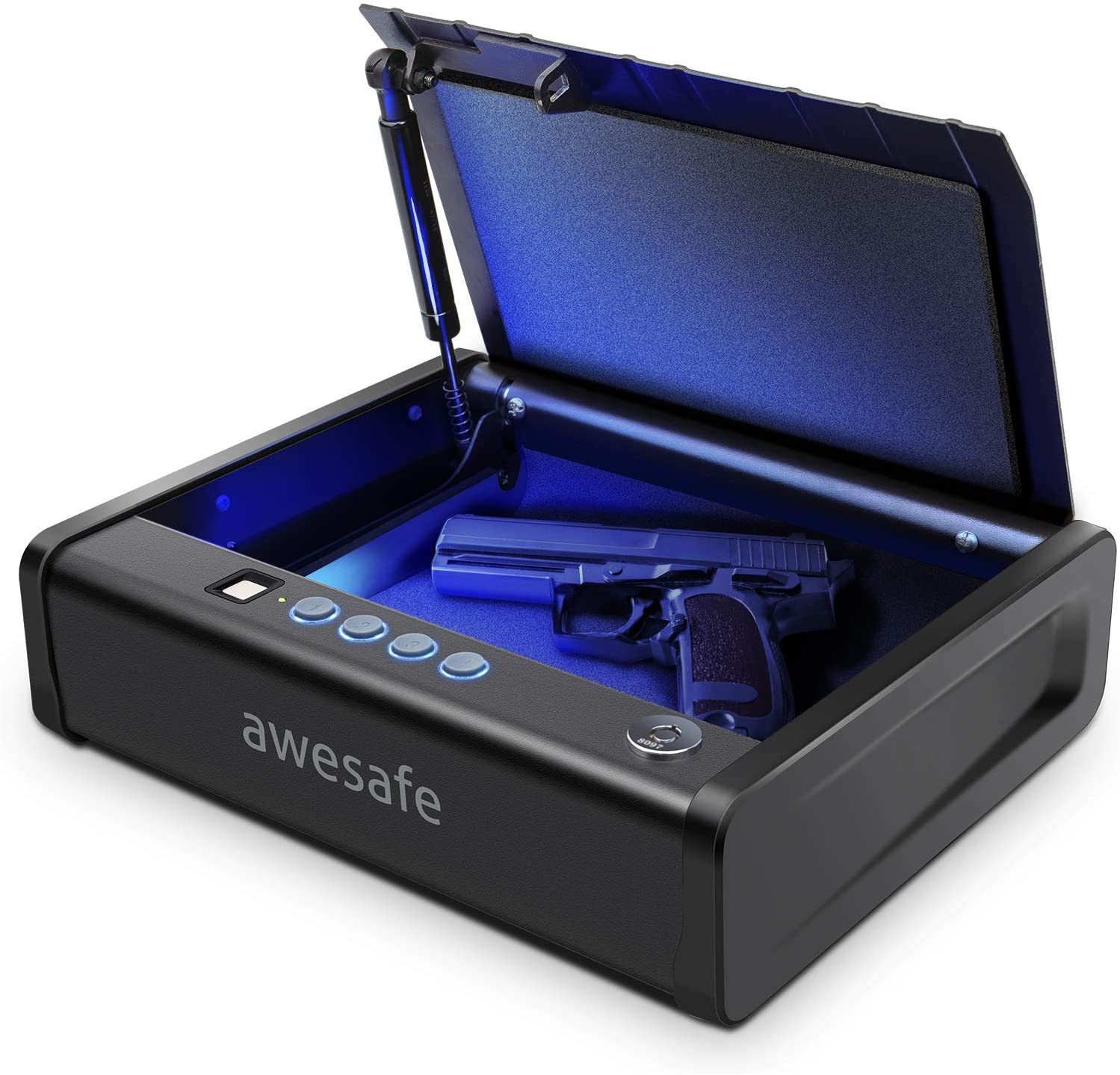 Like all of the best handgun safes, the Vaultek VT20i has a biometric keypad. Once unlocked, the door opens automatically, and the backlit keypad lets you gain access in the dark. Likewise, a built-in light in the safe’s interior lets you find your handgun even at night. If you’re looking for a smart gun safe, this device also features an app that lets you check battery levels and the status remotely. We should note that this safe must be charged. 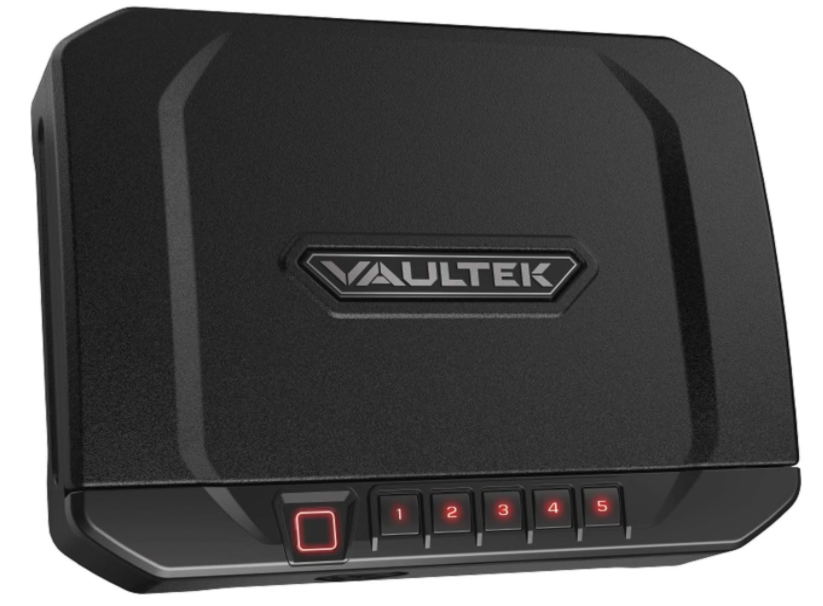 The AmazonBasics provides a low-cost but secure solution for handguns. This handgun safe is DOJ-certified and features double-layered steel housing. Biometric sensors provide secure access to your weapon, and you can even program 50 different fingerprints. Finally, you can drill this safe down so it can’t be easily moved. 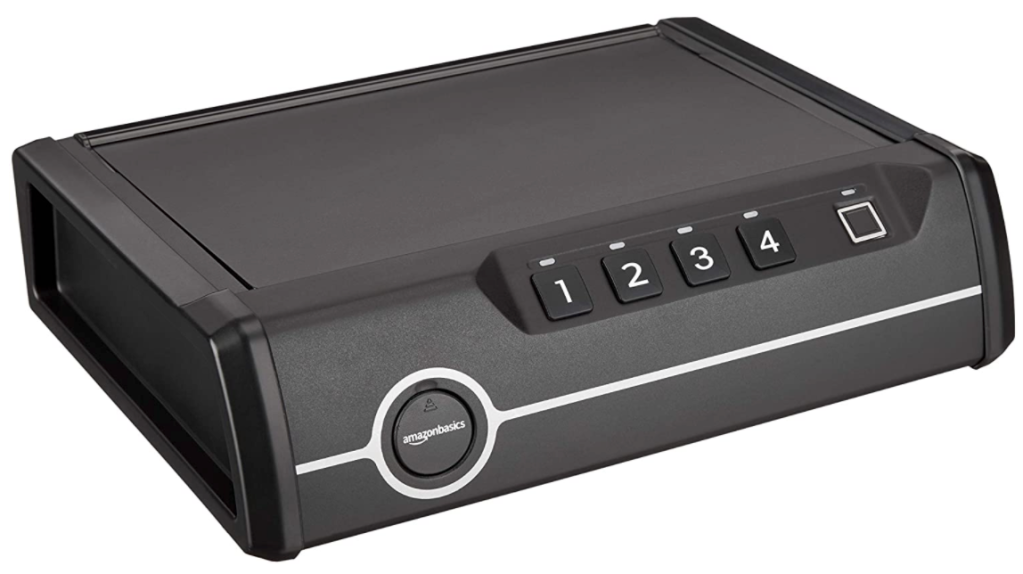 Make Your Mark at Home with the Best Power Drills

Make Your Mark at Home with the Best Power Drills