Before you head out the door, what are the things you always take with you? For most people, these would include a phone, wallet and keys. But for many people, pepper spray is a crucial part of that mix. Whether it’s kept in a purse or attached to a keychain, pepper spray can be a valuable tool for buying peace of mind and staying safe in dangerous situations whenever you’re outside of your home.

Of course, pepper spray is a weapon, so you may be wondering about the legality of buying a pepper spray and whether you need any permits. You can find a state-by-state breakdown here, but in most states, pepper spray can be legally bought with a few restrictions (for example, in California, the container has to be less than 2.5 oz. New York has more restrictions, and you can’t order pepper spray online in the Empire State).

The reason pepper spray is one of the best self-defense tools has to do with range. If you’re trying to fend off an assailant armed with a knife, for example, pepper spray allows you to stop them before they get too close. Pepper sprays are also affordable, easy to carry and pretty darn effective, making them a relatively safe option for the average person.

Most pepper spray products use capsaicin, which is the same chemical found in peppers. When this chemical irritant comes into contact with a person’s eyes, it produces a painful burning sensation in the eyes, nose and throat. In fact, the inflammatory effects can cause a person’s eyes to swell, briefly blinding them. Plus, you know, it hurts like hell. If you ever need to make a grown man cry, pepper spray will get the job done, and fast. Suffice to say, pepper spray is not a toy, and you can face serious consequences for misusing it. But in a dangerous situation, pepper spray can also be a literal lifesaver.

Besides protection against would-be assailants, there are also pepper sprays available specifically to protect against attacking dogs or as a bear repellent. We’ve rounded up some of the best options that you can buy online. Our top picks are both gel pepper sprays. Gel spray has a long-range, is less susceptible to blowback, and is less likely to be recirculated through an HVAC system if used indoors. Finally, consider adding a good pepper spray to your emergency kits, as human beings can be the most dangerous threat during a disaster event.

Sabre is one of the most trusted brands for pepper spray, and this is a solid option for the average user. It has a long shelf life as well — up to four years. The spray also has a belt clip for easy carrying. This pepper spray uses gel dispersal, which has a greater range and reduced blowback from wind. The canister has a flip-top lid that protects against accidental dispersal but makes it easy to access in emergency situations. It also has UV marking dye to help identify attackers.

Mace has become so synonymous with pepper spray that you might not have realized it’s a brand name, and that’s just a sign of how reputed their products are. This option disperses in gel form, which has a wider range of up to 18 feet. Gel spray is also less susceptible to wind conditions. This is the pocket model, so it’s an easy option to take on the go. It’s designed to be easy to use as well. Flip-up the safety lid and press on the red button to disperse. The formula also marks assailants with an invisible UV dye. And if you’re travelling, this can be packed into your checked luggage. 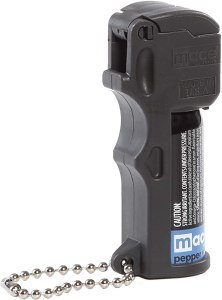 This pepper spray from Fox Labs has a spring-loaded flip-top that prevents accidental discharge, while still making it easy to deploy. The formula has 5.3 million Scoville Heat Units, so it’s a powerful option to stop would-be assailants in their tracks. The spray has a shelf life that’s three years from the manufacturing date printed on the canister. The compact canister has 1.5 oz of spray.

If you camp or hike in areas that have significant bear populations, you might want to pack a bear deterrent. This powerful option is more expensive than others on this list, but it has 8 oz of spray, which is significantly more than others on this list. Plus, it can reach up to 32 feet, making it easier to protect yourself against a bear attack. The canisters have a four-year shelf life. Bear sprays have become common weapons during some protests and riots, and it should go without saying that these products were not designed to be used against human foes.

If your keychain already has a bottle opener, a pocket knife, some club cards and a bulky car clicker, you might not want to add anything too large to it. That’s why this compact option is such a great pick. It’s a couple of inches long and a little wider than a pencil, and the included keyring makes it easy to attach to your keychain. It disperses in a conical shape, making it easier to hit your target.

We hate to admit it, but not all dogs are good dogs. Being a postal worker is a hard enough job as it is, without having to worry about attacking dogs. That’s why postal workers carry dog repellent, and HALT is the brand used by USPS mail carriers. Naturally, no one wants to hurt a dog, which is why this repellent is powerful but fades quickly, giving the user enough time to get themselves (or their pets) safely out of a bad situation. Like most pepper sprays, this repellent uses capsaicin as its agent. 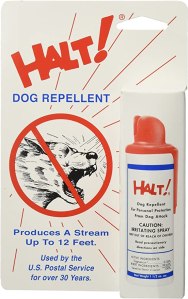 This pepper spray from Sabre includes a convenient keyring that you can attach to your keys or carry in your pocket or bag. It’s not the smallest on this list — it’s 3″ tall and 1″ wide, so it’ll still take up some space, but it’ll still be manageable and convenient. The 3-in-1 formula includes the spray, tear gas and UV dye to help identify assailants. The spray has an ergonomic grip that makes it easier to hold onto in high-stress situations. The twist-lock prevents accidental discharge. 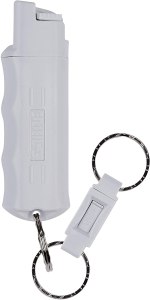 Protect yourself and your dog from out-of-control dogs with this specially formulated pepper spray from Sabre. It’s designed to quickly disable an attacking dog without causing any lasting harm. The compact size is easy to attach to a keychain, so you can take it on walks to keep your dog safe. The up to 12′ range allows you to stop an attacking dog before it gets too close.

The 26 Coolest Keychains for a Man’s Everyday Carry, From Pocket Clocks to Self-Defense Tools