Electricity is something that most of us take for granted. We come home, flick a light switch and 140-odd-years of innovations work seamlessly to illuminate the room. It’s only until we’re forced to go without electricity that we realize just how much we depend on it. That’s why it’s important to keep emergency supplies on hand. Flashlights, matches, non-perishable foods and water are all essentials that everyone should have in their home or apartment. It’s also worth considering a compact generator.

There’s a tremendous amount of variation in compact generators; with price tags being equally as varied. The major factor separating generators is wattage. But even when looking at watts, there are still multiple numbers you’ll have to deal with. In fact, many generators that you see give a higher wattage than what you can reasonably expect it to perform at. This isn’t necessarily misleading advertising, though. That higher number is the peak wattage, and it refers to the total amount of power that the generator can put out. That peak wattage can be helpful for powering devices that take more power to turn on than they do to normally run. But peak power can only be relied on for a very short period of time, so you generally want to look at the constant running power as the threshold.

If you need to power household appliances like refrigerators and microwaves for extended periods of time, you’re going to need a powerful generator. The same goes for those who reside in mobile homes and RVs. But in the event of a blackout or some other temporary power outage, you may opt to rely on non-perishables and whatever food you have at home. In that case, you can make do with a lower-powered generator for powering things like phones and laptops. Likewise, a small generator can be a great option for campers who need to power a few essentials but don’t want anything too noisy.

We’ve rounded up a few different power stations and generators. Several of these are actually battery-powered, so they fall somewhere between a generator and a battery bank. The battery options are suitable for indoor use and charging small personal electronics like phones, laptops and CPAP machines. These can be great in emergency situations or short camping trips. If you’re looking for something more powerful, we’ve included some compact gas-powered generators. They’re inverters, meaning they’re quiet and fuel-efficient. Plus, they’re CARB-compliant, so they’re legal for usage in California. The inverters on this list also produce stable sine waves, making them safe for laptops and phones. These can be good for outdoor usage, RVs, and camping. Of course, you should never (ever) use a fuel-powered unit indoors.

With that in mind, these are some of our favorite generators and power stations available right now.

Westinghouse was an early pioneer in the electrical industry, and the company continues to innovate. This portable inverter generator has 1800 rated watts or 2200 peak watts. It’s meant to run quietly, in addition to running efficiently — it can have up to a 12-hour runtime on a 1.2-gallon tank. Plus, it’s parallel capable, meaning you can hook it up to another Westinghouse generator for more power.

Cons: Some options are more powerful. 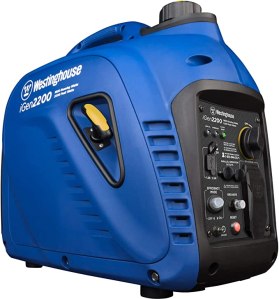 This option is not a generator in the traditional sense, because it doesn’t run off gasoline. Rather, it’s arguably more of a really big backup battery. It’s well-equipped to charge personal electronics like GoPros, phones and laptops. It can power some smaller electronics like small minifridges and electric coolers, but it’s not designed for powering larger electronics. There’s also an LCD screen with a graphic display of the battery life, so you can be sure you have enough power beforehand. You can also power the generator using solar panels, which the brand sells separately.

Pros: This is a good option for those looking for a green solution; it runs off battery power, and you can power it using solar panels (sold by the brand separately). It also generates a pure sine wave, meaning it won’t harm devices like laptops.

Cons: Takes a long time to recharge the unit, especially with solar panels. 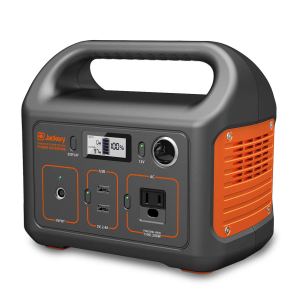 While admittedly a little larger than some of the other options, this is still a good option for on-the-go use. Plus, since it has wheels, you don’t have to pick it up and haul it around. It’s an inverter generator, meaning it’ll run more quietly and efficiently than standard portable generators. It’s parallel-ready if you need to link it up with another generator.

Cons: Somewhat large for some settings. 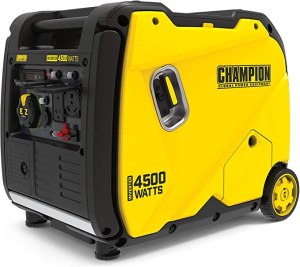 You certainly couldn’t use this small power station from Energizer to power standard household appliances. But for keeping personal electronics juiced up, this option will get you through any outages and trips. It can also power miniature appliances such as car fridges. The small size is easy to carry in your hand.

Cons: Not suited for full-size appliances. 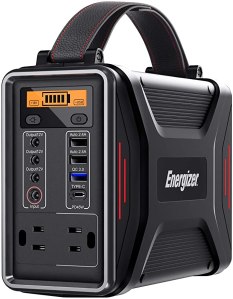 For a portable option that you can safely use indoors, this power station from GoalZero is electric-powered, making it a safe and convenient choice. It has a 150 watt-hour battery. You can charge it from a regular wall outlet, your car’s 12V port, or even the compatible solar panels (which are sold separately). There’s an AC port, two USB ports and a 12V port.

Pros: Versatile electric option that can be powered using solar panels, a car’s cigarette port or a regular wall outlet. 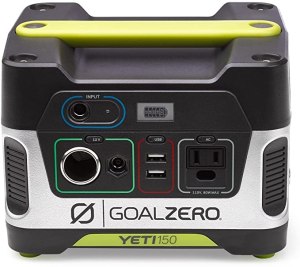 Inverter generators work by turning an AC current into a DC current and then back again. That may sound needlessly complicated, but it results in a generator that’s fuel-efficient, quiet and more lightweight than a traditional generator. This option from WEN is a 2,000-watt generator, making it one of the more powerful options on this list. There are two three-prong outlets, a 12V DC port and a 5V USB port, making it powerful enough to power a handful of essentials.

Pros: This generator is CARB-compliant; it passes the California Air Resources Board standards, meaning it can be used in California. Since it is an inverter generator, it runs more quietly than conventional generators.

Cons: The oil must be changed every 25 hours. 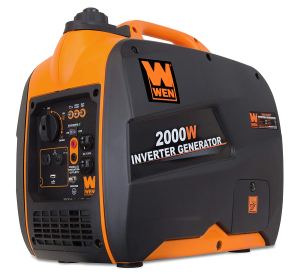 This generator from Generac is a compact option that’s available in different wattage options. The GP2500i is so named for its 2,500 starting watts. It has 2,200 running watts. Since it’s an inverter, it’s built to run more quietly than similarly powered portable generators. The unit is 48 pounds, so while it’s certainly not light, it’s a manageable option, especially with the convenient carrying handle. 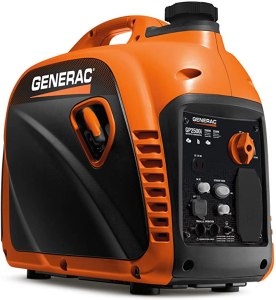