The 90s fashion trend that began in 2017 has been gathering up speed every year, and brands like JNCO, Paul Frank and Lisa Frank (no relation) are getting their time in the sun again. Brands everywhere are producing fast-selling 90s accessories, tech and decor items. Speaking of decor, wicker and shabby chic are now fashionable, as well as doorway curtains.  Chances are you know someone (or are someone) who’s deeply in love with everything 90s, so we’ve rounded up 20 of the best 90s-themed products you can buy right now.

The only thing wrong with Cards Against Humanity is that it can get boring once you memorize all the cards. Liven it up again with this 90s nostalgia expansion pack for a fresh take on the classic card game. It’s especially fun if you want to alienate some pesky meme-savvy teenagers.

Trivial Pursuit has an edition for every decade, and this 90s edition has over 25,000 questions that you can use to torture nieces and nephews when you sit down and play the game. One reviewer wrote, “It’s like time traveling. Wish I had bought this sooner. You have my gratitude.”

If you miss the colorful plastic floppy disks of the 90s, don’t worry – you can still enjoy their presence with these floppy disk coasters from PHT. They’re made of high-end silicone and come as a set of eight. 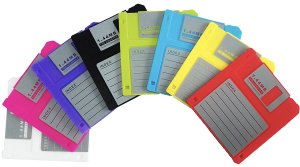 Yes, back in the 90’s people carried their games in their pocket, not on their phones. This nostalgic-looking iPhone 11 case looks like the classic Gameboy of old.

Glitter is good, and glitter was very good back in the ’90s. If you could cover something in glitter back then, it was slathered with it. This glittery MacBook case in that decade’s favorite shade snaps on over your laptop, and you can even cover your keyboard with glitter too.

This super minimal laptop sleeve informs everyone which decade you really belong to. It’s made of lightweight polyester and features a scratch-resistant microfiber inside.

Like vinyl’s major comeback a few years ago, cassettes are now making a comeback as a trendy way to listen to music. This clear cassette player from Urban Outfitters lets you enjoy old cassettes and makes a great accessory.

Reebok classics are another ’90s staple that has seen a considerable resurgence lately as one of the hottest shoe styles around. They combine some of the past couple of years (the athletic look, chunky fit, and throwback vibe) for a classic look that upgrades any outfit in 2018.

Lisa Frank was huge in the ’90s; you could buy stickers, notebooks, clothing and even home décor. The brand attempted a couple of comebacks in the early aughts, but they couldn’t reach that same level of frenzied “must-havedness” of the 90s. They’re not as big as they once were, and their offerings are not as varied as they were in their heyday. But you can find Lisa Frank-designed mugs that are dishwasher and microwave safe. We’re just not sure how much longer the brand will be around.

Ultra-wide jeans, aka JNCOs, were a must for any raver or club kid in the ’90s. JNCO, which stands for “Judge None Choose One,” is back in business, and these tentlike wide jeans are available for purchase without the need for a TARDIS.

Funky, slightly wonky lava lamps were prominent in the ’70s, and somehow, they became popular in the ’90s. Place this on a side table or nightstand.

You know how you turn around and everything one day, and I mean everything from socks and undies to tees and kitchenware is avocado-themed? Well, back in the ’90s, the rainbow was that decades’ avocado. Toss this rainbow pillow on a bed, chair or couch.

Speaking of throw pillows, faux fur throw pillows in the ’90s meant elegance and fancy-schmancy excess. This faux fur pillow is in Millennial pink, an excellent way to throw in two decades in one item. Perfect for any Millenial or Gen Z, you know.

Since we’re talking about home decor, do you know what one significant home interior design trend was in the 1990s? It was Shabby Chic. And like many trends, it’s becoming popular again. This two-piece farmhouse coffee table set could have come from a living room back then.  The larger of the two tables measures 31.5 by 31.5 by 14.2 inches, and the smaller one measures 15.7 by 15.7 by 18.4 inches.

Wicker was used in that decade for indoor, not outdoor furniture. One could buy a wicker living room set as well as individual pieces. This two-tiered accent table is an updated version of that style. The woven top can be lifted off the base and used as a decorative tray. It measures 22 by 22 by 24.6 inches.

Whether they were beaded or macrame, Doorway curtains were trendy in the 1950s, 1960s, then faded away until the 1990s revived them. Instead of installing them in a doorway, why not place them behind the bed, so it becomes a headboard. Hysunland’s macrame panel measures 37.5 by 82 inches.

Skaters in the 1990s loved Vans sneakers, and the checkerboard slip-on was the shoe to wear when working on tricks.

Speaking of skating, here’s an item that was flaming hot in the 1990s. This is a two-in-one situation. Paul Frank and Julius, the Monkey, was a big thing in the decade’s latter part. Combine that cartoon on a skateboard, and you’ve got seriously retro vibes.

“Friends” was the hottest TV show of the 1990s. Rather than go out, people stayed home to watch Rachel, Ross, Phoebe, Chandler, Joey, and Monica rather than go out. Were they on a break or not? Relive those days, or should we say episodes, with this T-shirt and matching stickers.

Forget Camping. This Sleek Tiny Home, With Working Plumbing, Can Be Built Anywhere in About an Hour.