Smoking of any kind continues to drift further and further out of vogue. In 2015, the CDC reported a 5% drop in the prevalence of smoking among adults in the United States. As Americans continue to say “so long” to tobacco, many opt for nicotine replacement over a complete quit.

While the debate continues over the health ramifications of vaping, few non-smokers deny it’s less offensive than the odor and irritation of tobacco smoke. Plus many smokers who go on to successfully quit, first switch to a replacement option, such as vaping or nicotine gum.

From Boy Genius Report:
Apple files lots of patents for lots of potential products and manufacturing methods. Some are weird, some are cool, and some make almost no sense, but a newly uncovered patent application from the company is one of the rare examples of all three; Apple just patented a vape. 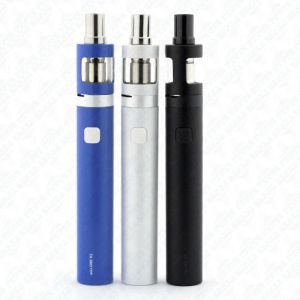 The application, which was discovered by Digital Trends, is titled simply “Sublimator/Vaporizer” and describes a device that allows for the vaporization of an unidentified substance via a dual-chamber system. The abstract reads as follows:

The device described in the patent is cylindrical in shape, including a thermal jacket and a body unit as well as a lid.

At first glance it might sound like a component of a modern day recreational vaporizer, either for nicotine or another substance such as marijuana, but the patent’s description of the heating element actually compressing onto the substance being vaporized is quite a bit different than anything on the market. It doesn’t sound like a system that would be suitable for vaping loose marijuana or tobacco, or even watery e-liquid. The only type of substance that would conceivably work well with such a chamber design would be some kind of thick liquid or concentrate or — and this is far more likely — some type of medicine.

Is it possible that Apple wants to get in on the vape game, or at least hold a few related patents? Perhaps, but it’s also just as likely that it’s a one-off that will fall into the depths of the patent archives like many others that carry Apple’s name.