If you wear boots regularly, you likely are all too familiar with the unpleasant feeling of slipping on wet footwear. Boots seem to take forever to dry out, whether they’re made from leather or canvas. That’s especially unfortunate as boots are more likely to be worn during inclement weather than the average pair of shoes. And, while you can find a thousand hacks for drying out boots fast on Pinterest, one of the most reliable ways to do so is to buy and use one of the best boot dryers off Amazon.

Boot dryers are usually small devices that move warm air into a pair of shoes when you are finished wearing them for the day. This has several benefits. Boot dryers:

Of course, these devices are also useful for a variety of footwear and other clothing items, like gloves and socks.

How to Dry Boots with the Best Boot Dryers

Drying boots with the best boot dryers is super simple. All you have to do with most boot dryers is invert your boots and slip them over the device’s arms. Just make sure you don’t block the airflow completely or you risk damaging the dryer or your shoes.

Most forced-air boot dryers will dry out a damp pair of shoes in two hours, but dryers that rely on natural airflow may take overnight to complete the task. Once the boots are dry, simply remove them from the device and put them on your feet.

Do keep in mind that some of the boot dryers you can find on our list below use different drying methods. A few even require inserting something into the boots.

If you’re ready to say goodbye to wet boots forever, check out the eight best boot dryers available on Amazon.

With over 4,000 five-star reviews on Amazon, the PEET Dryer takes our top spot. This original invention holds one pair of shoes or two items of clothing and can dry them overnight. But, the best part is that the process is whisper quiet. That’s because it relies on science rather than a fan to move hot air up to your shoes or boots from the heating element. While you might think this would require a lot more electricity as the heating element has to do all the work, this device actually uses less energy than a low wattage light bulb and will add just a few cents a day to your electric bill when left to run 24/7. As an added bonus, PEET offers an excellent 25-year warranty on this product. 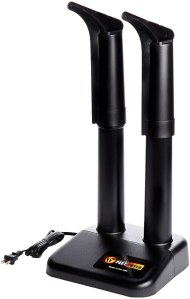 A cheap and simple option for drying boots and other shoes, the KOODER Boot Dryer comes with two inserts that you can leave in your shoes overnight to have a warm and comfy pair in the morning. The inserts are powered by electricity sent through a heavy-duty cord. They send heat through the top and side holes, allowing it to fill the space in your shoes and remove any moisture lingering inside. This, in turn, sanitizes the footwear and prevents and removes odor due to mold or fungus growth. The plastic around the exterior of the device is heat resistant, but we recommend unplugging the dryer a few minutes before you attempt to remove the device from your shoes. 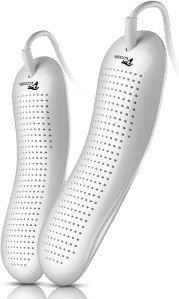 If you travel for outdoor work or you take frequent skiing vacations, having a portable boot dryer, like this Manledio version, could make the experience a lot more enjoyable. The seven-by-11-inch device weighs just two pounds, meaning it can be kept in a suitcase if need be. Yet, its small size doesn’t mean it isn’t powerful. The heating element can warm air up to 104 degrees Fahrenheit, and the included motor quickly moves that warm air up into your boots. In addition, the arms are telescopic up to 14 inches, allowing you to dry a wide variety of footwear. 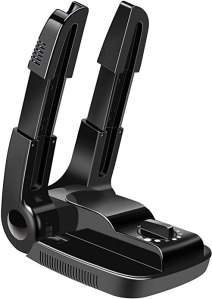 The JobSite Shoe Boot Dryer claims to be the original device on the market. Whether or not that is true, this boot dryer is one of the best. It relies on the fact that warm air rises to dry out boots and other garments without a noisy fan or motor. It takes just eight hours to dry damp shoes or overnight to dry soaked boots. The sturdy base means that this dryer can hold even the heaviest of footwear safely. And, the included LED on/off button is an improvement over some other models which require you to unplug the device to turn off the dryer. Grab this device for a silent solution to your stinky boot problem. 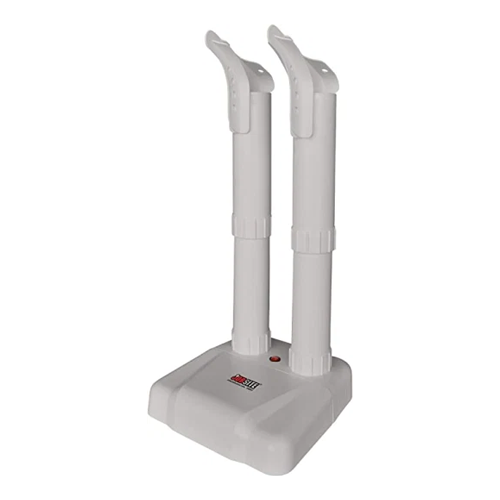 For couples that enjoy winter sports or one person who often has both wet boots and gloves, it is really worth it to buy a device that can dry four items at once. That’s exactly what the LAVIEAIR Boot Dryer does. The 250-watt heating coil and motor force warm air up through the arms to dry damp boots and gloves in approximately two hours. Soaked garments will take slightly longer, although the longest the device will run for is 180 minutes. This dryer is safe to use on a large variety of materials, from neoprene to leather, thanks to the fact that it blows warm air instead of hot air. As an added bonus, it’s fairly compact and lightweight for a boot dryer, so it’s easy enough to move from room to room or store it away when you don’t need it. 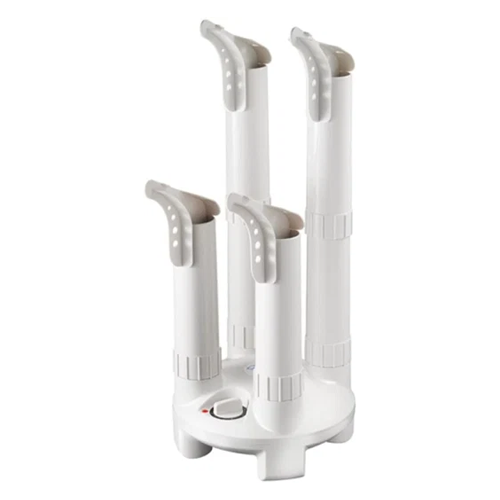 Somewhat resembling a hair dryer you might find in an old-fashioned hotel, the Kendal Shoes Boots Gloves Dryer is a wall-mounted option which can dry two pairs of shoes at once. Many reviewers like this device as it boasts flexible tubes rather than rigid arms for directing warm air where you need it to go. This means you can even put two tubes in the same shoe to speed up the drying process. In addition to the wall-mounted device, Kendal also includes a tabletop glove warmer which is capable of drying two pairs of gloves or socks simultaneously. 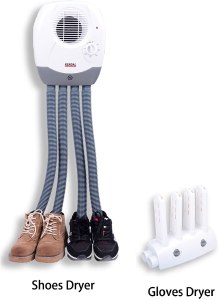 Although it may be more expensive than others on our list, the DryGuy DX Forced Air Boot Dryer really is one of the best boot dryers on the market. The forced-air contraption takes in ambient air and passes it over a heating element. It then expels this air through four different tubes for four different items of clothing at 105 degrees Fahrenheit. As a result, clothing, including heavy-duty work boots, can be dried in one to three hours. In addition to a convenient timer and the ability to turn the heating element off, this handy device also includes two extension tubes, so that you can dry boots that are up to 16 inches tall. 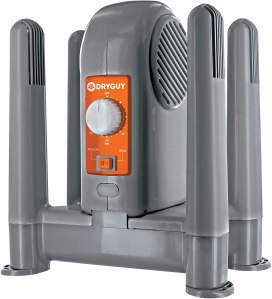 Whether you run a business or you have a large family that works hard and plays hard, the GearDryer Wall Mount Boot Dryer might be the best option for you. This professionally capable dryer can hold up to six pairs of gloves or boots. The device can be mounted on the wall or used on a wheeled caddy (sold separately), and it has the ability to heat air up to 35 degrees more than the ambient temperature. Beyond that, it offers five pre-programmed drying modes, all of which use 200 CFM forced airflow from the dual fans. Yet, the dryer can still be plugged into a standard 120V wall socket. This is a great option for skiers, snowboarders and hockey teams. 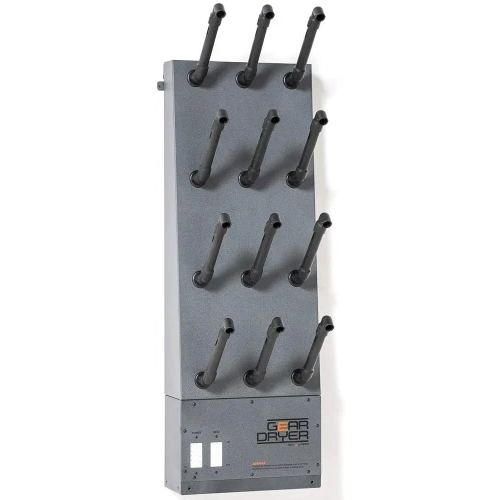