Calligraphy is a style of penmanship that has been around much longer than cute home signs sold on Etsy. Starting with the Shang Dynasty, calligraphy has been practiced around the world and in several forms. Most recently, calligraphy has been enjoying a resurgence thanks to a return to more traditional writing designs as artwork in logos and formal invitations. If you’re ever wanted to try your hand (literally) at calligraphy, the place to start is with the right tools. In this case, that means user-friendly calligraphy pens.

There are two main styles of calligraphy pens and we’ve included both on our list of the best calligraphy pens. A traditional dip calligraphy pen gives users a wider and thicker stroke, although it can be messy to use liquid ink and takes some practice. Dip pens allow for the use of italic and flexible nibs, which have two tines and are rounded. If more pressure is placed on the pen, the flexible nib will split and the tines will create a wider stroke. Italic nibs do not have tines and are typically used for thinner, Gothic-style writing.

The second main style for calligraphy pens are pens with cartridges. These have a smaller learning curve and are easier to use, but they don’t allow users to customize the nibs.

Brush pens have also become popular recently because of their thick stroke, which is conducive to the newer style of calligraphy writing seen in Western artwork (think cute wedding signs and Instagram art with quotes). Made with natural or synthetic hair, brush pens require the control of a more advanced calligrapher. Those just starting out can opt for felt tip pens or markers, which are more forgiving, less expensive and are more resistant to leaks. Felt tip pens and markers are gaining in popularity for the style of calligraphy often seen in social media and memes.

Whatever type of calligraphy pen you choose, skip the printer paper and go with paper designed either specifically for calligraphy or for sketching, which will hold the ink. Investing in a calligraphy guide book is also a great way to study different styles and learn the basics.

If you’re ready to create your own wedding invitation, or at least up your signature game, we’ve compiled a list of the best calligraphy pens below.

For those who are serious about calligraphy and like to practice their penmanship on a daily basis, we like the PILOT Parallel 4 Nib Calligraphy Pen Set. The user-friendly set comes with 1.5 and 2.4 mm thick nibs for thinner lines and 3.8 and 6.0 mm thick pens for thicker lines. The set comes with black and red ink cartridges that can be used in any of the pens and create a layering of colors. The lightweight pens are comfortable and easy to use and come with the tools necessary to clean and replace the cartridges. 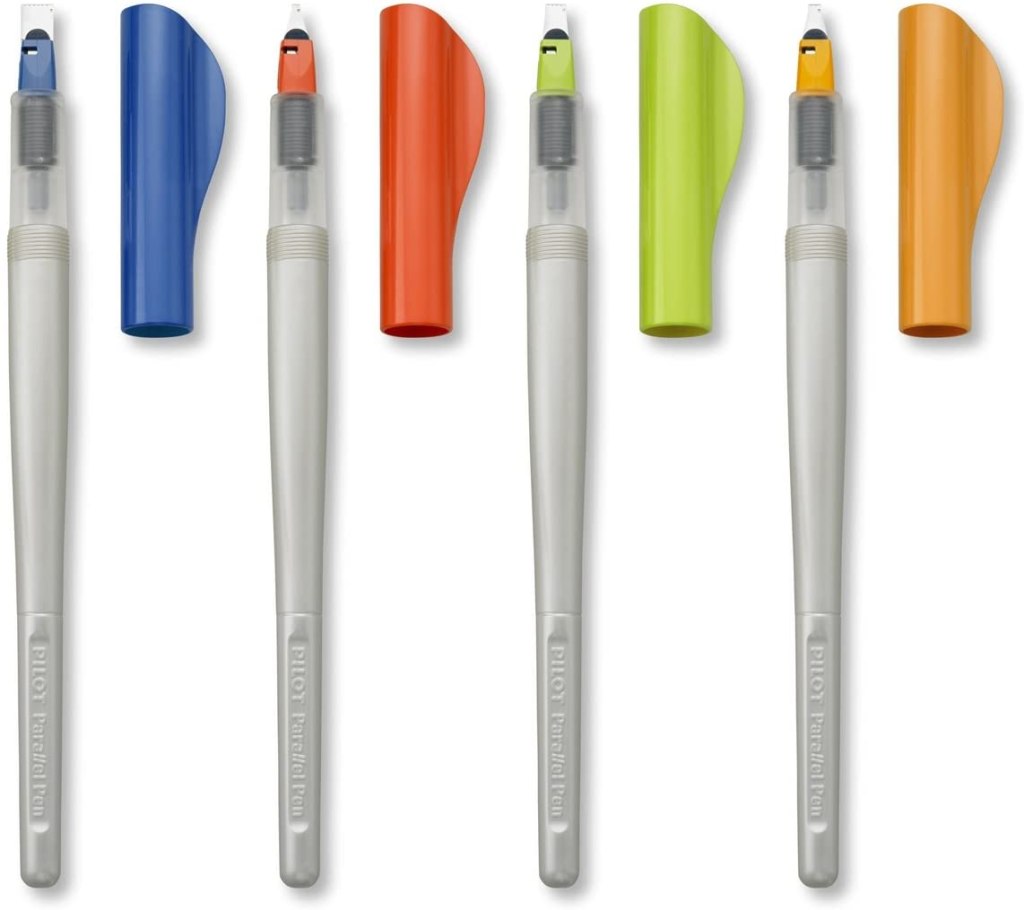 As we mentioned earlier, using a dip pen is typically a better idea for more advanced calligraphers, but if you are interested in learning the intricacies of a dip pen, an affordable beginner set like the one from Hethrone Calligraphy is a great place to start. The set includes 11 nibs and one jar of non-toxic black ink. The set arrives in a beautiful gift box that makes it a great present for those interested in trying out calligraphy for the first time. 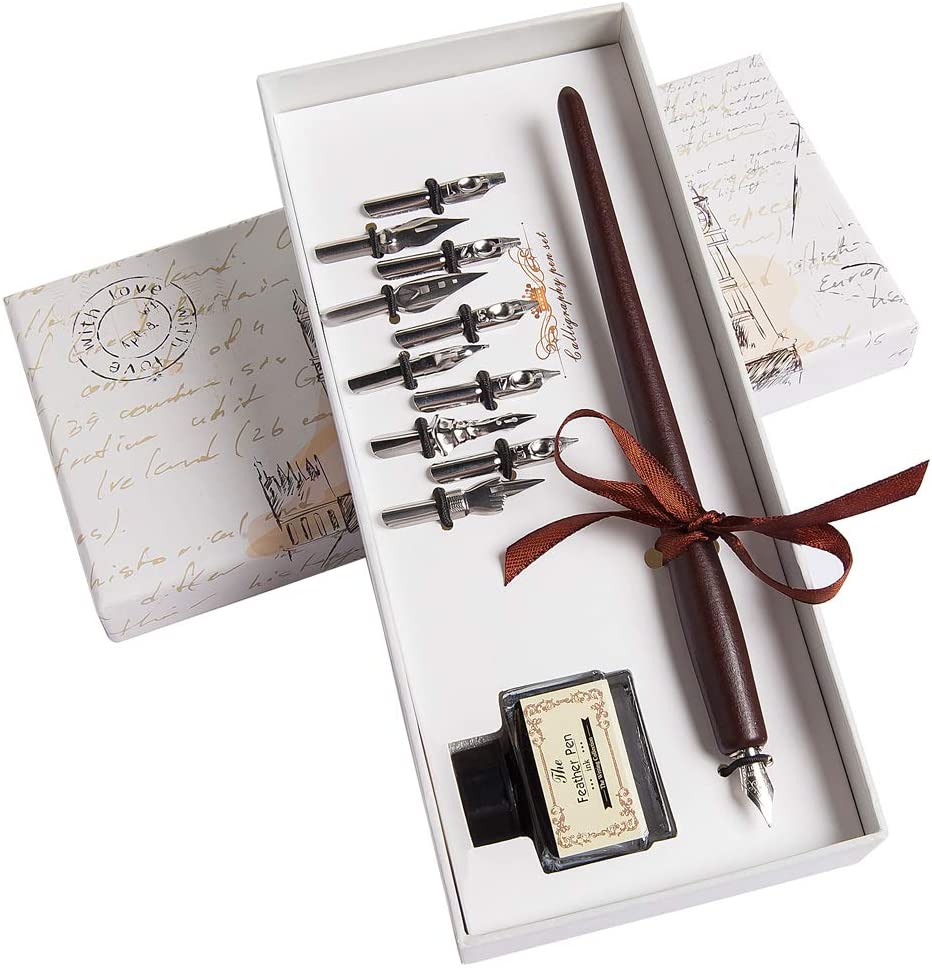 The Tombow Fudenosuke pens are widely considered one of the best brush pens for calligraphy. The company offers several sets of its brush pens, including multicolored sets and the set we’ve included below, which comes with a soft, flexible brush tip and hard tip. Both pens have water-based, pigmented black ink and can be used for calligraphy and illustrations. A great option for beginners, the affordable pens make it easy to try several different styles thanks to the different tips included in the set.

For a brush pen set that will have your favorite quotes looking Insta-ready in minutes, we like the MISULOVE Hand Lettering Pens. The set includes extra-fine, fine, medium and brush tips for calligraphy and lettering. Customers can try out a variety of styles with the different brush tips and by applying more or less pressure when creating their letter art. Each pen comes with water-based, non-toxic, acid-free and non-bleeding ink that leaves clean lines. A great option for invitations and scrapbooking, the hand lettering pens are quick-drying and fade-resistant. 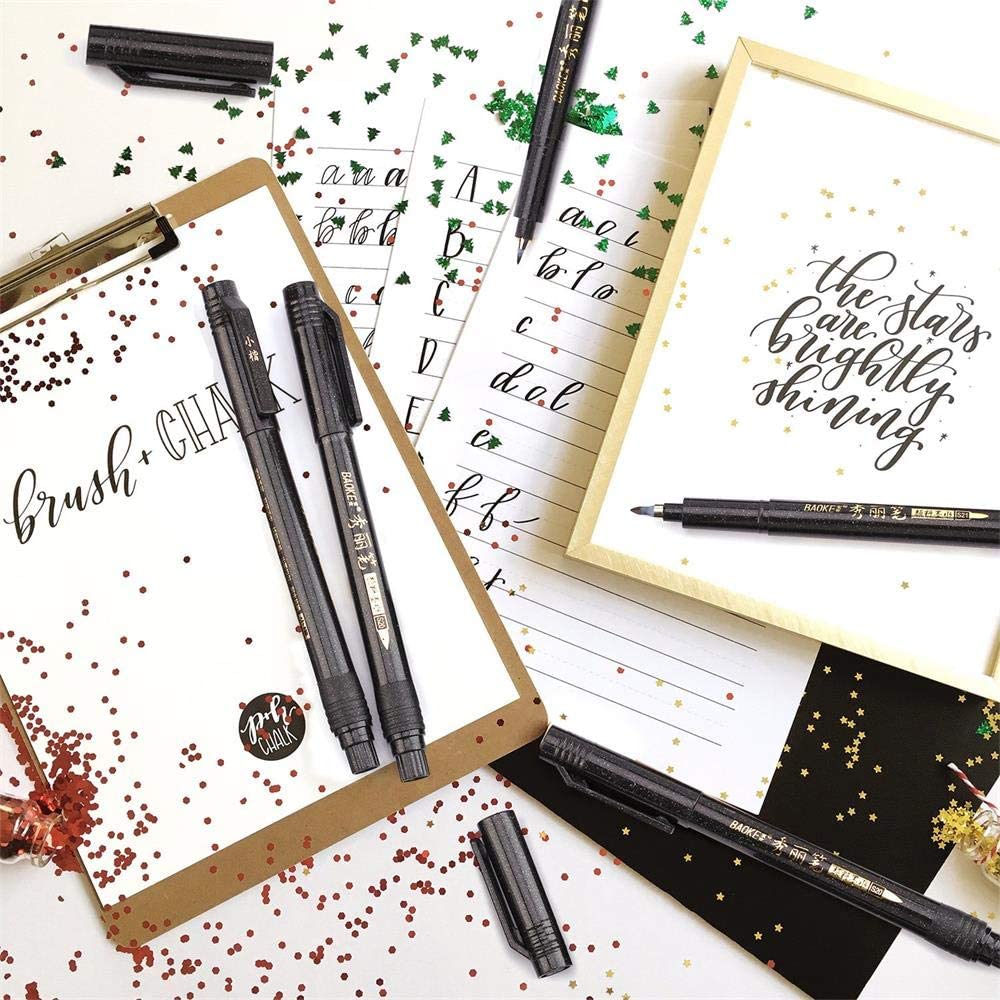 The Duke Asian Calligraphy Fude Nib Fountain Pen is a versatile pen that looks formal enough to be used in a professional setting and can create a variety of styles depending on pressure and angle, making it ideal for artists. Excellent for italic calligraphy, the Duke Asian pen has a durable stainless steel nib and a removable converter for bottle ink. Compatible with international cartridges, customers will be able to use their fountain pen for years thanks to its quality craftsmanship and convenient storage pouch. 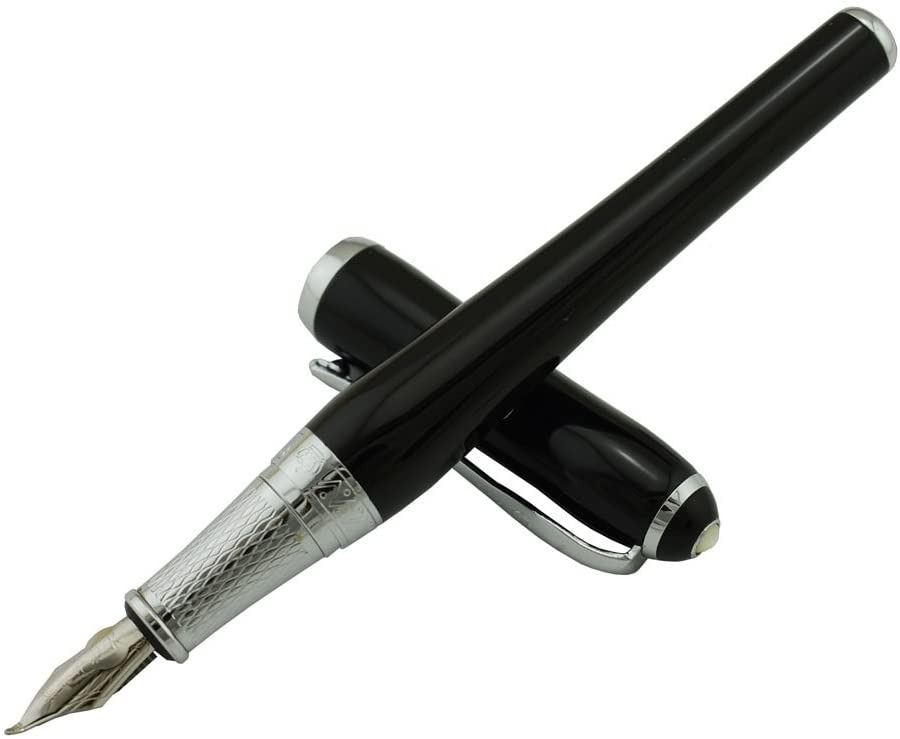 For a calligraphy set that combines tradition and modern convenience, we like the Plotube Calligraphy Pen Set. The impressive set can be used by beginners or more advanced calligraphers. Twelve nibs, including two golden nibs and 10 stainless steel, and seven 15 ml bottles of ink in a variety of colors make this a great option for customers who want a dip pen that makes it possible to experiment with different styles and designs. The impressive set is finished off with an antique brass pen holder and an instruction booklet to help users get started with their calligraphy journey. 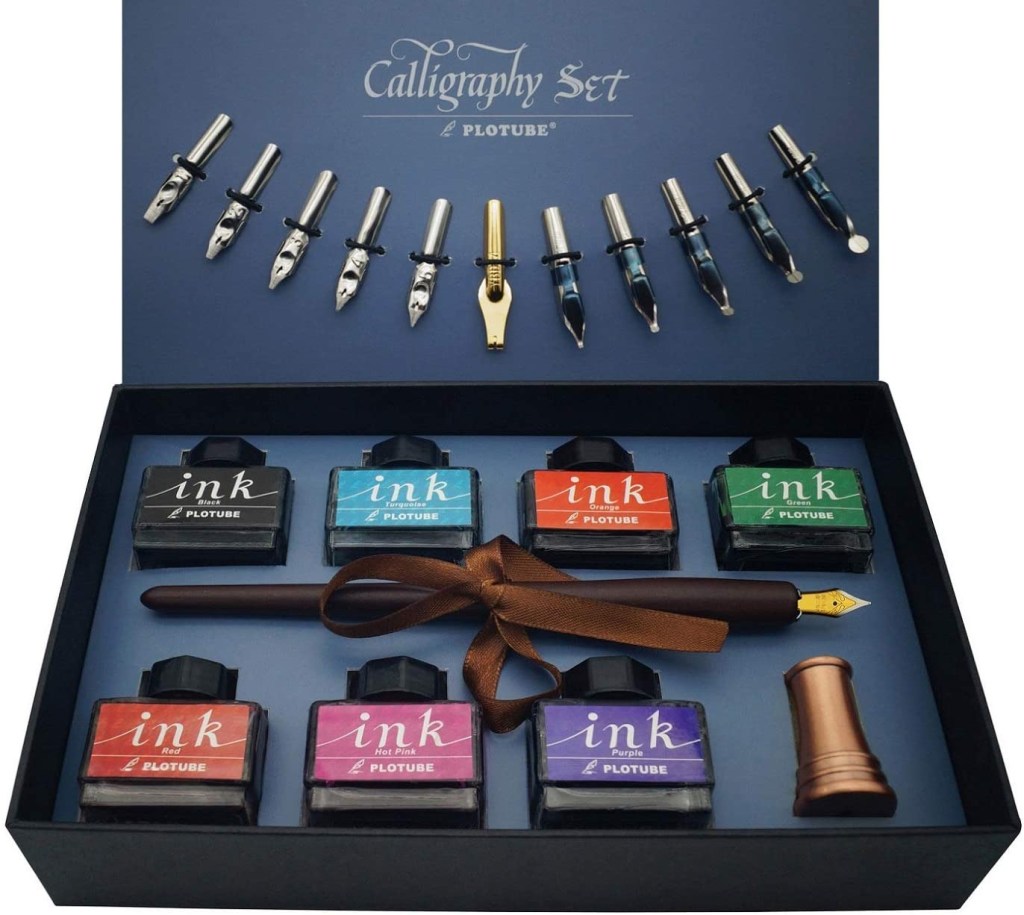 For a calligraphy set that not only helps users create beautiful art but also looks stunning on any desk, there’s the Calligraphy Essentials Set by Hammacher Schlemmer. The Italian-made calligraphy set includes a handcrafted beechwood pen that has been stained in mahogany for a classical look. A stunning chiseled pen rest is included in the set, which also comes with six vintage nibs that offer a variety of writing styles. Black, blue, red and sepia vials of ink are included, as well as an instruction manual. The set arrives in a beautiful gift box that makes this an excellent gift option. 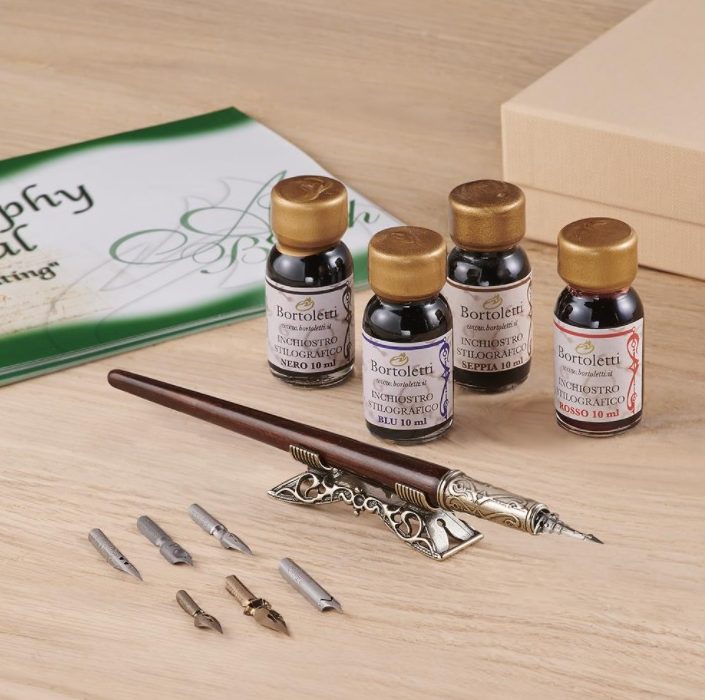 BEST FOR FORMAL USE

For a pen that looks at home in a professional setting and can deliver stunning and intricate loops and swirls, there’s the Wanderlust Borneo Fountain Pen by Cross. Available in four beautiful designs, the fountain tip pen can be purchased in a medium or fine width and comes with two black ink cartridges for refills. Customers can also opt for a dip finish by using a converter that allows the Wanderlust to be filled with bottled ink. 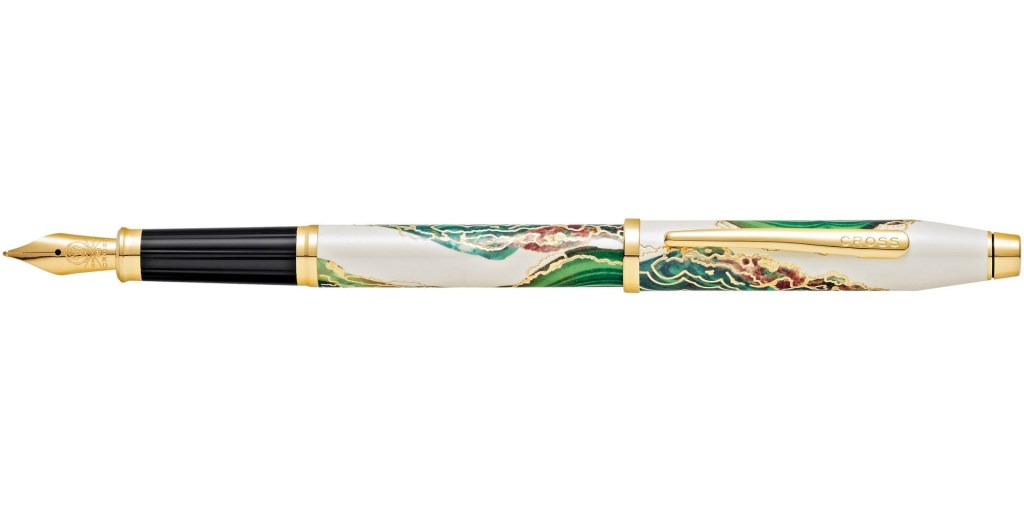 For a pen that will be treasured for years, there’s the Meisterstück LeGrand Rollerball Pen by Montblanc. The stunning rollerball pen can be used for traditional calligraphy writing and is ideal for formal work where signatures and handwritten notes are treasured and kept for years. Although the pen does not include changeable nibs or a flexible head like calligraphy-specific pens, it can be used for thinner styles of lettering. Montblanc also sells black and gold ink for its Calligraphy Elixir line that can be used with several of the company’s pens. 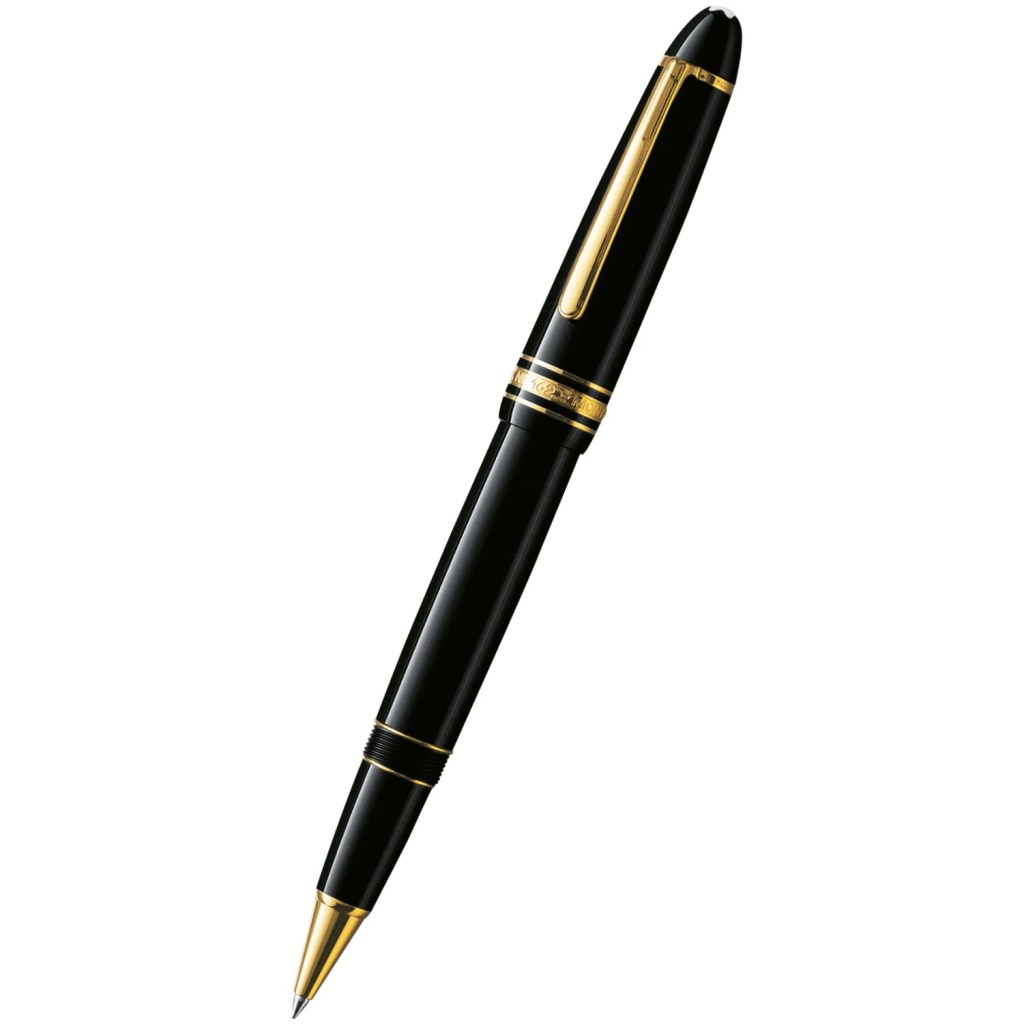