Your grandmother probably loved it, your parents likely shunned it in favor of Teflon and your peers buy as much of it as they can. What are we talking about? Cast iron, of course.

Although cast iron cookware has been on the market for more than 100 years, it has experienced a bit of a resurgence in the last decade. In fact, sales of cast iron have experienced more than a 225% increase in the last ten years, according to the Cookware Manufacturer’s Association.

This is due in part to the revelation that the chemicals in non-stick skillets have caused some health concerns (many non-stick skillet makers have moved away from PFOA-based coating). Cast iron is also tremendously popular for its durability. Properly taken care of, it can last forever. Cast iron is a natural non-stick alternative, and the material also has the ability to go from stove to oven to grill with ease. Plus, it requires less oil to cook with, making it a healthier type of cookware all around.

Of course, the biggest drawback with cast iron is maintenance. It’s famously durable, but since it’s iron, it’s not impervious to rust. In short, you wouldn’t wash your cast iron skillet the same way you would other types of cookware. Lodge recommends gently washing by hand and using a small amount of soap or a non-abrasive scrubber and promptly drying with a lint-free cloth or paper towel. You can also season your pan, but as Lodge points out, simply cooking with your cast iron skillet actually helps to season it.

If you’re ready to switch to cast iron cookware, buying one of the best cast iron skillets is a good place to start. Most of these versatile pieces come pre-seasoned, meaning you’ll be ready to cook everything from cornbread to fried chicken as soon as your order arrives.

Since the modern resurgence of cast iron, Lodge has become a giant in the skillet business. This specialized company makes a range of affordable, pre-seasoned cast iron cookware that both beginners and experts will enjoy. In particular, their 10″ and 12″ cast iron skillets get tons of praise as they are heavy enough to take on searing and braising and boast a natural, easy-release finish. 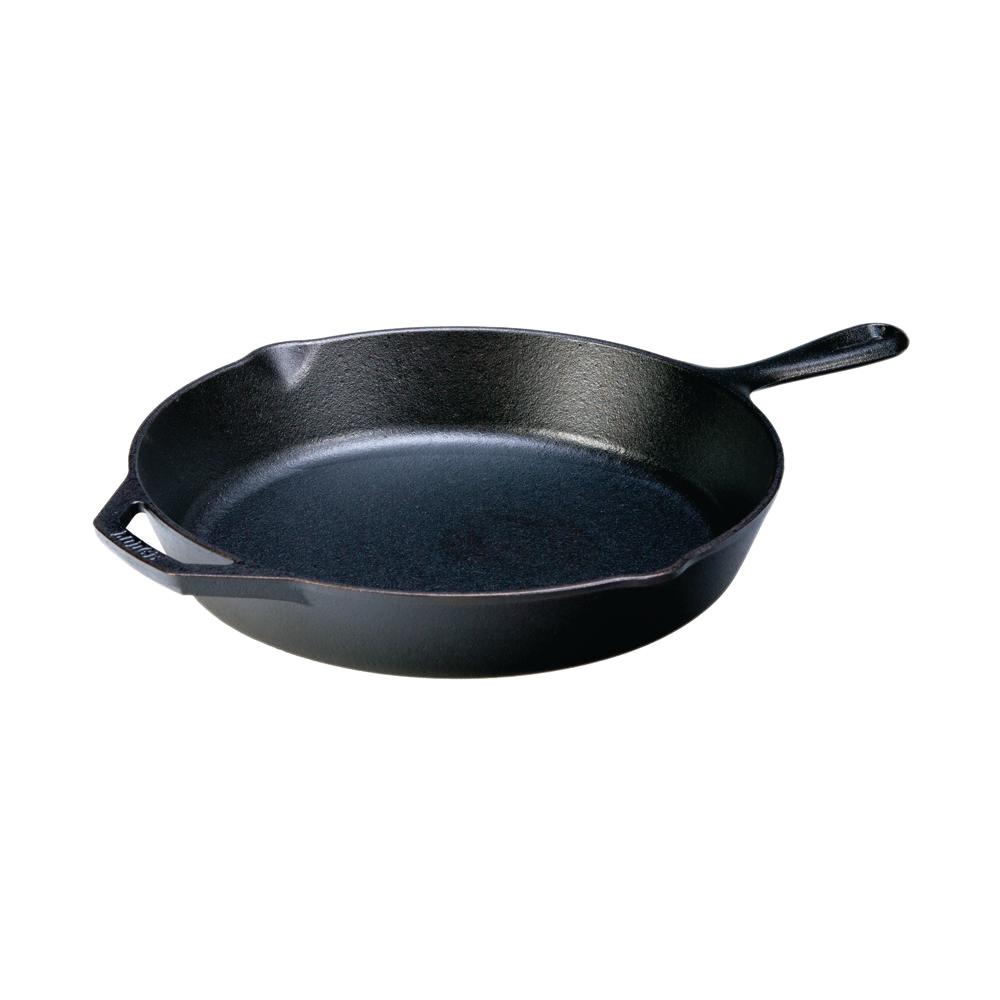 Le Creuset is known for its beautiful (albeit expensive) Dutch ovens, but they also make other great cookware like this cast iron skillet. These skillets are enameled on the inside and outside, adding extra durability and rust-resistance. Like all Le Creuset products, these skillets are available in a variety of vibrant colors, such as “flame orange” and “Caribbean light blue.” They’re available in a versatile 10.5″ size. 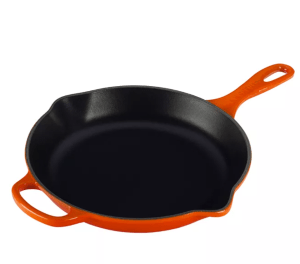 There are plenty of premium, expensive cast iron skillets with rich histories and charming branding. But if you just want a reliable, basic and affordable cast iron skillet, this option from Artisanal Kitchen will get the job done. It has draining spouts on either side, a traditional handle with a hanging loop, and a loop handle on the opposite side. It comes in 8″, 10″ or 12″, and the price shown is for the 12″. It’s also pre-seasoned twice, making using it easier. 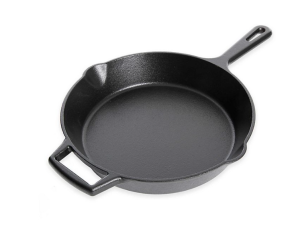 Cast iron skillets are notoriously heavy, which is why this option from Lodge is a good pick. It has loop handles on opposite sides of the skillet, instead of a regular pan handle, so you can more easily carry it with both hands to move it from the burner to the dinner table. Lodge’s skillets are pre-seasoned and ready to use, and they are suitable for induction cooktops, ovens and broilers. It’s available in 10″, 12″ and 17″ sizes — the price shown is for the 10″. 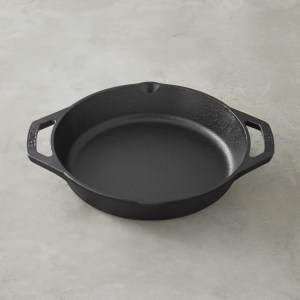 Cast iron isn’t just good for skillets. If you’re a casserole obsessive (or know someone who is), this dish would make a stylish addition to any home and makes a great gift. It comes in black, but we particularly like this retro mint color. The cast iron is enameled, adding to the durability and preventing rust. The dish has curved handles for carrying. 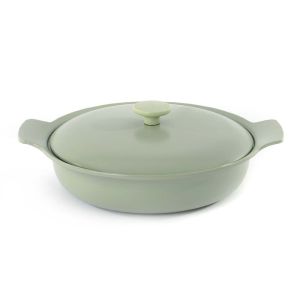 A quality cast iron skillet doesn’t need to be expensive, and this Utopia Kitchen Pre-Seasoned Cast Iron Skillet proves just that. The sturdy, 12.5″ skillet arrives pre-seasoned and ready to cook out of the box. With superior heat retention, this piece of cookware can be used on stovetops, in ovens and even on the grill. Keep in mind that the factory pre-seasoning will need to be supplemented by additional seasonings at home to create a nearly 100% non-stick surface. 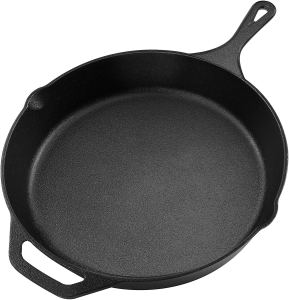 Most cast iron skillets are a one-piece purchase. But the Legend Cast Iron Skillet gives consumers a few extras, like a lid and a silicone handle cover. These extras make a huge difference when cooking with cast iron, as many recipes require covering during the cooking process. In addition, moving a cast iron skillet without a handle cover can be dangerous. As the pan is entirely made of iron, the handle gets hot too! Together with the pre-seasoned skillet itself, this three-piece set means you’re ready to cook the minute you receive your order. 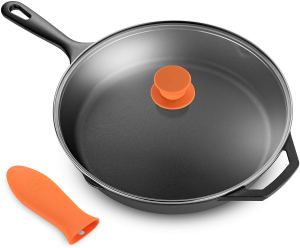 We promise the Staub Mini Cast Iron Fry Pan isn’t just on this list because it’s so darn cute. This piece of cookware might be small, but it packs a punch thanks to its enameled bottom, which means it can be used on any stovetop. What’s more, it boasts the ability to withstand temperatures up to 500 degrees F. Plus, it’s already seasoned and has a slightly rough surface to create an ideal cooking environment. From the oven to the stove, this is a little pan that could. 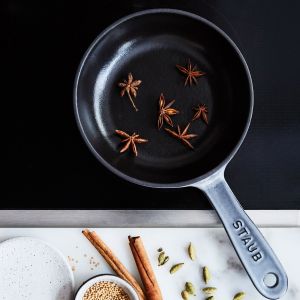 Do you cook for a crowd? The Smithey Ironware Company Double Handled Cast Iron Skillet was designed to do just that with its 14″ diameter and double-handled design. It can help you fix up a delicious paella, roast a whole chicken or braise enough meat for a small dinner party. In addition, this gorgeous piece of cookware comes pre-seasoned and is nearly non-stick out of the box. The almost too shiny exterior means this is a pan in which you’ll be happy to serve your dishes on the table, too. 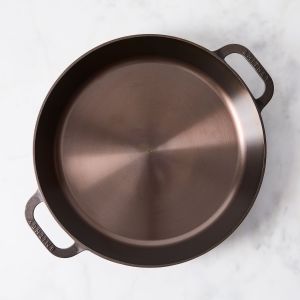 May we also present the FINEX 12″ Cast Iron Skillet with Lid, which is something unique in the world of cast iron cookware. Its octagonal design and matching lid are certainly more eye-catching than the average skillet. Add to that the coiled handle, and you’ve got a skillet that’s worthy of display. In addition, this piece of cookware is made to be heirloom quality thanks to the high-quality production process used by FINEX. It takes eight hands-on people and a tumbler full of river rocks to produce this gorgeous skillet and its ultra-smooth cooking surface. 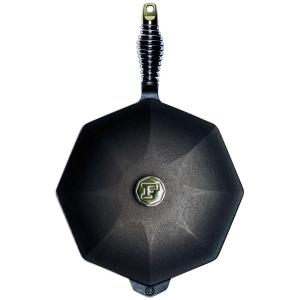 Buying a pan this small might seem ridiculous, but if you fry an egg for breakfast every morning, there’s no reason to use a giant pan. The 6.5″ size is perfect for a single egg, but it can also be used for mini baking projects. Like all of Lodge’s cast iron products, this skillet is pre-seasoned, so you can use it right away. The handle has a loop if you want to hang it from a pot rack. 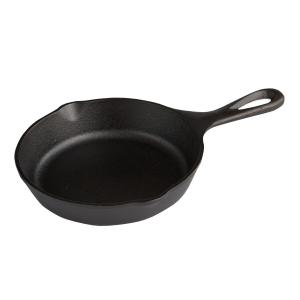 This cast iron pan has a contrasting wooden handle, which not only makes it a more stylish and interesting option, it also makes it easier to use. Regular cast iron users will know that the handles can get quite hot, but the wood handle on this option makes it easier to grab, since wood is a poor conductor of heat. The 10.25″ pan size is a good medium size for daily use. 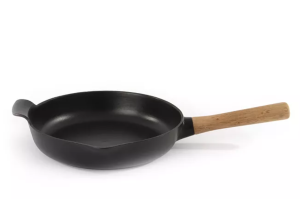 Turn your stove into a grill with this griddle from Lodge, which conveniently fits over two burners so you can quickly grill delicious kebabs and sandwiches for the whole party. Best of all, this griddle is reversible; you can use the ribbed side for grilling meats and the smooth side for pancakes. It’s also oven-safe, and it comes pre-seasoned. 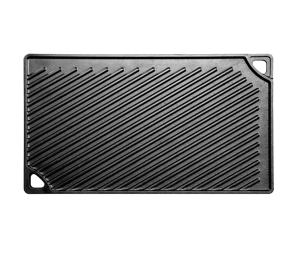