While most interior designers would rather scream at you than install a ceiling fan in your home, the green movement has meant that the market for these cooling mechanisms has continued to grow.

That’s because ceiling fans are far more energy-efficient than air conditioners or smaller fans thanks to their large blades and powerful motors. In addition, these fans function not only to make your home cooler in the summer, but they can also make your house warmer in the winter by moving warm air down from the ceiling to the floor.

If you’re ready to add a ceiling fan to one or two rooms in your home, keep reading to learn more about the different options available. After that, we’ll dive into the best ceiling fan brands on the market in 2020.

Each ceiling fan is assigned a wet rating. Some are made for use in very wet conditions. Other’s can function in semi-wet conditions, but most will need completely dry conditions. The latter are known as interior or inside fans, while all the others can also be used outside. It’s important to note that all outside fans can be used inside but now inside fans can be used outdoors. Therefore, if you plan to install a ceiling fan outside, make sure it’s wet-rated for dealing with those conditions.

The size of the space you intend to use your fan in directly relates to the size of the fan you must buy. According to The Home Depot:

By buying a fan of the correct size for your room, you’ll ensure you receive proper airflow throughout the entire space.

Once you’ve determined which size fan you need to buy, think about where you are going to place it. Depending on the design of your room, you may need to think about the way in which you will need to mount the fan. In general, there are three mounting types:

When buying a ceiling fan, the mounting types should be included in the description of the product.

While it’s not strictly necessary to have lighting attached to your ceiling fan, most come with a lighting kit. These lights can be of various designs, and you might see options with multiple bulbs or one big one in the middle. However, beyond choosing the light that looks the best for you, you may want to consider the type of light that comes with the fan. You might find sets with these options:

It’s also important to remember to match the lighting type to your interior design because although LED bulbs are the most energy-efficient and longest-lasting, they also emit the brightest light which may be jarring in some rooms. Take all these factors into account when choosing the best ceiling fan for you.

Ceiling fan motors tend to be categorized as either DC or AC. DC motors use less energy and produce less heat than AC motors, but the latter produces more airflow due to the fact they tend to be bigger and more powerful.

If energy efficiency is the reason you are buying a fan, stick to DC type motors and look for fans that are Energy Star certified.

Like most household devices these days, ceiling fans can be controlled in a variety of ways depending on the model you buy. Usually, you’ll find three types of ceiling fan controls:

Ultimately, the control type you look for in a ceiling fan depends on personal preference and the technological state of your home.

Now that you know more about ceiling fan options, let’s take a look at the nine best ceiling fan brands on the market.

The Hunter Fan Company invented the ceiling fan back in 1886, and they’re still one of the best ceiling fan brands to shop in 2020. For years, they’ve been creating innovative designs and mastering advances in technology. All of their fans are as quiet as a whisper and won’t wobble even at high speeds. Plus, Hunter fans are tested to be long-lasting, sometimes functioning for twice as long as the competition.

In particular, the Hunter Fan Company Transitional Ceiling Fan is a beautiful and economical option for any room in the house. The multi-speed, reversible ceiling fan comes with an LED bowl light and an on/off pull chain. 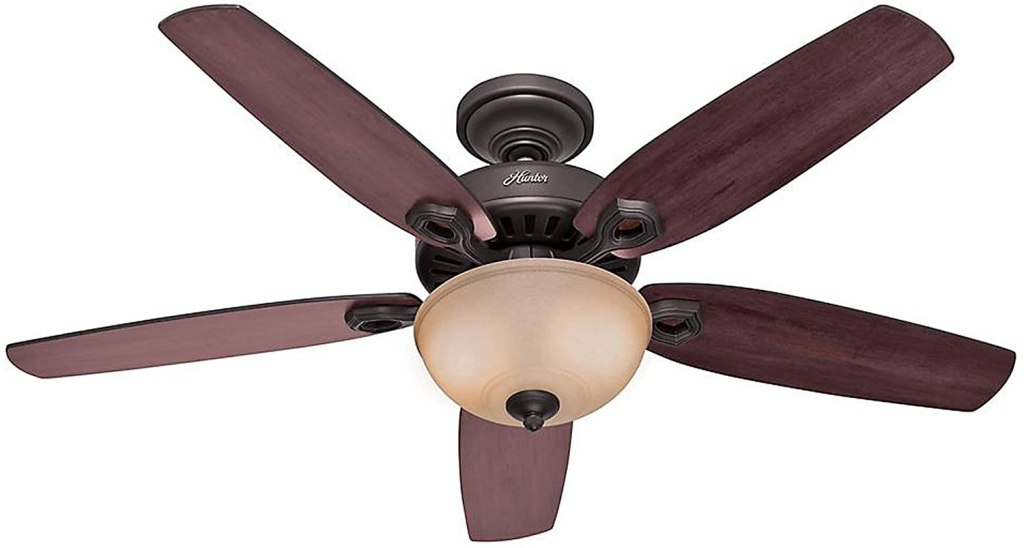 Honeywell has been a global technology leader since the 1930s, but the company finds its routes in thermostats invented at the end of the 19th century. Of course, a natural evolution for a company that designs thermostats is heating and cooling apparatus, like the ceiling fan. Similar to other products that Honeywell produces, their ceiling fans are made with energy efficiency and your budget in mind. All their fans ensure air circulation while adding style to your home. We love their Ocean Breeze Contemporary fan with its large blades and surface area small enough for rooms with limited space. 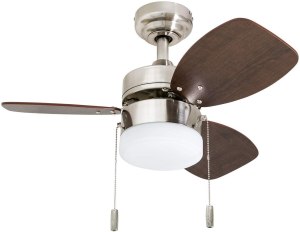 A company known for its ceiling fans and light fixtures, Hampton Bay is owned by The Home Depot. Because of this, you’ll often find Hampton Bay ceiling fans included in big sales, often making them some of the cheapest ceiling fans you can buy. And while the ceiling fan brand does make a great many budget and mid-range fans, their line doesn’t include any high-end options.

One of the best Hampton Bay ceiling fans you can buy is this Southwind LED Fan which is designed to provide air circulation to a sizable room. The fan comes with reversible cherry and maple blades as well as a remote control and a bowl LED light kit. 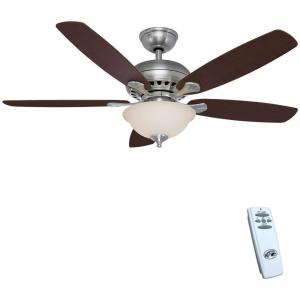 Like Hampton Bay, Harbor Breeze is owned by a big box hardware store. The brand is Lowe’s own brand of fans. While these ceiling fans are not as popular as Hampton Bay’s fans, they are more widely available as you can purchase them on Amazon and Wayfair in addition to Lowe’s. With that said, this line of budget to mid-range fans is very similar to the previous brands on our list. You’ll have to trade off quality to get this price, but you’ll end up with a stylish and functional fan for under $150.

The Harbor Breeze Mazon Flush Mount Indoor Ceiling Fan is a particularly good option for small rooms. The brushed nickel design adds an extra bit of flair to this well-designed piece. In addition, the three-blade fan comes with a remote control and a lighting kit.

Better known for their lighting options, Westinghouse has married the cooling ability of the fan to its popular light fixtures in order to create some of the best ceiling fans available. In spite of new lighting regulations, the company remains committed to supplying a full range of ceiling fans and lighting options to match emerging trends. For that reason, you’ll find that Westinghouse makes a full range of ceiling fans, from high end to budget options.

We’re big fans of this Westinghouse Lighting Comet Matte Black Ceiling Fan. It’s well priced, boasts five blades and is easily reversible for dealing with the summer heat and the winter chill. Beyond functionality, it’s also quite attractive thanks to the matte black finish and dome light that’s available in both LED and non-LED options.

If you’re looking for the best ceiling fan brand for interior design, check out the Home Decorators Collection. As the name suggests, this brand focuses on creating ceiling fans that blend with modern designs. Even interior designers can’t be angry about these beauties. In addition, most Home Decorators Collection ceiling fans are “lighting kit optional,” giving you the ability to customize the lighting kit that you pair with the ceiling fan. Alternatively, you can leave off the lights completely in favor of low-level lamps or natural lighting.

The Home Decorators Collection Altura Bronze Ceiling Fan is one example of the above design principles. The remote-controlled ceiling fan boasts rubbed bronze accents and five hand-carved wooden blades. It can be mounted using a downrod and comes with a handy remote control. 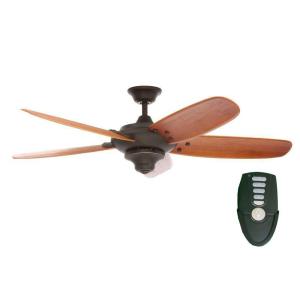 Minka-Aire produces fans for all occasions. No matter whether you’re looking for a fan for indoors or outdoors, this industry leader has a range of styles available, including traditional, transitional and contemporary styles to fulfill your needs. When it comes to a company you can trust for outstanding craftsmanship at a fair price, Minka-Aire fits the bill. A great example of this is the Minka-Aire Light Wave Integrated LED Indoor Distressed Koa Ceiling Fan. This contemporary cooling fan is available in four different colors and integrates an energy-efficient light into the design while maintaining a modern feel. It also comes with a handheld remote and is capable of keeping large rooms cool with its large 52-inch blade sweep. 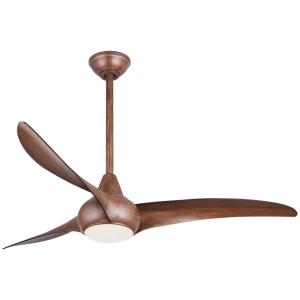 With models including hand-carved blades, sleek appearances and stunning natural elements, it’s little wonder that Progress Lighting has a reputation as a modern and stylish ceiling fan brand. However, perhaps the best way to describe what they bring to the table is actually affordable luxury because while you may be paying more than you would with the average, off-the-shelf ceiling fan option, you’re getting a home decor piece which is sure to stand out.

The Progress Lighting Springer Windmill Ceiling Fan is a great example of this balance of artistic influence, on-trend elements and a general feeling of style. This farmhouse-inspired 60-inch fan includes 12 walnut-finished blades attached to a rustic bronze center canopy and sports a six-speed remote control for easy customization. 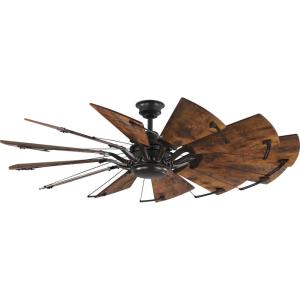 Big Ass Fans came up with their name not because they’re particularly proud of the large size of their posteriors, but because they changed the game with a whole new way of thinking. Where many companies simply focused on the goal of speed and the highest number of revolutions a fan could make, Big Ass Fans, went, well… big. Their large in-office or home fans use a high-volume, low-speed (HVLS) airflow approach, meaning you still stay cool but with a smoother and quieter way of accomplishing that task. If this sounds like something you want in your own home, try the Big Ass Fans Haiku L Smart Ceiling Fan. Not only does it make use of their HVLS outlook, but it’s also smart, meaning it can be controlled with your smartphone or even your voice using Amazon Alexa or Google Assistant.