When it comes to achieving the best possible bedroom for you, there’s a number of factors that come into play. For example, you should choose the right bedroom decor to appeal to your personal taste and ensure your bed has all the elements you need for a great night’s sleep. One key element in the last bit is your choice of duvet cover.

While you may think a duvet cover is a duvet cover, we’re here to tell you that it’s not quite that simple. There are loads of things you need to think about before you purchase this essential bedding item, including:

To help you find the right bedding, we’ve put together a collection of the best duvet covers available from across the internet. Our list has options for sleepers who prioritize softness, who love artsy designs and for those who live through a variety of seasons throughout the year.

The Classic Duvet Cover is woven from 100 percent long-staple cotton, which provides a crisp, airy and cool feel, delivering a comfortable night’s sleep for everyone underneath. It boasts a 270 thread count of cotton percale weave for a softness, which further adds to your through-the-night comfort. The cover is also OEKO-TEX certified for chemical safety and includes long and short side labels to prevent any unwanted confusion during the dressing process. You’ll also have over 10 different styles to choose from, including plain colors and attractive patterns. 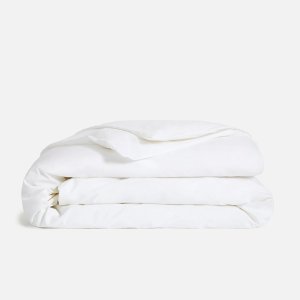 As it is crafted from luxurious 100 percent long-staple Egyptian cotton, this Sateen Duvet Cover is an easy way to add an air of luxury to your bed set up. Not only does it provide protection to your duvet insert inside, but it also looks and feels great. It even feels better with more time and more washes. The cover features twill ties in all four corners to keep your duvet in place and can be machine washed, ensuring the maintenance of your cover is simple. 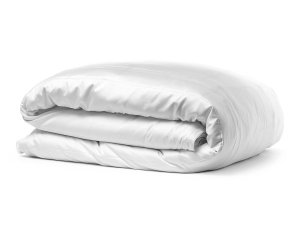 The SORMAG Duvet Cover boasts five-star reviews from over 90 percent of Amazon reviewers. The cover is available in either king or queen sizes as well as a white or gray. In addition, the cover is made from 100 percent washed cotton, which delivers a breathable experience for the person or people underneath. Plus, this option is also machine washable for easy maintenance, and it’s resistant to fading, shrinking and tearing, giving your new duvet cover durability for years to come. 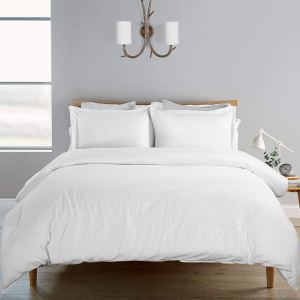 Available in five different colors and an attractive tree branch motif patterning, the Bedsure Duvet Cover Set is a well-reviewed and classy addition to any bedroom. This artistic bed cover’s decoration is reversible, making it easy to give your bedroom a fresh look when you feel the need. Each set includes a single duvet cover along with two pillowcases, which are all constructed from an ultra-soft, hypoallergenic microfiber. 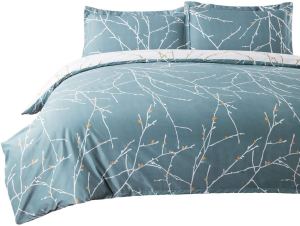 If you like something to look at in your bedroom, give this Cotexture Duvet Cover a go. When you order it, you’ll have a choice of five different designs, including boho stripe, blue floral and French rose, meaning there’s almost certainly a style to match your bedroom decor. The lightweight microfiber delivers an outstandingly soft experience, and the anti-wrinkle technology keeps your cover looking smart throughout its use. The cover is also available in three different sizes and includes two matching pillowcases. 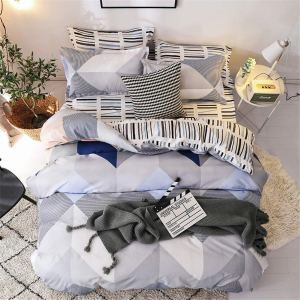 The Nestl Bedding Duvet Cover is currently the most popular option on Amazon, and with over 18,000 five-star reviews, it’s easy to see why. The cheap and cheerful cover comes is available in over 40 different colors and five sizes. Furthermore, the microfiber material is pet friendly as it won’t snag, and it’s lightweight and breathable, making this a great option for all seasons. With the Nestl Bedding Duvet Cover on your bed, it will feel like you’re sleeping in a hotel every night of the week. 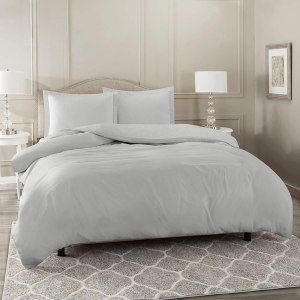 For some, the idea of luxury is slipping between satin sheets. Extend that feeling by including a satin duvet cover, too, and you’ll have a full-on satin wonderland in your bedroom. The Vonty Three-Pieces Satin Duvet Cover Set comes with both a duvet cover and two satin pillowcases. The duvet cover is held in place using a hidden zipper closure and four corner ties, which are essential given the slippery nature of the fabric. In addition, the set is available in five different colors, but the black certainly does make a statement. 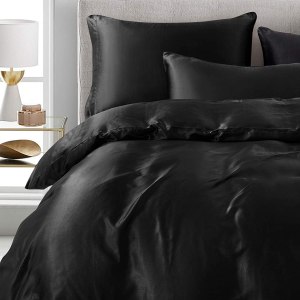 The Dreaming Wapiti Duvet Cover really has two things going for it. First, it’s super soft thanks to its 100% washed microfiber construction. Second, it comes in six really versatile, neutral colors, from grey to pure white. Furthermore, the breathable cover is held in place by corner ties and a hidden zipper closure. And, this set comes with a duvet in the size of your choice along with two pillow shams, which is everything you need to set up the nighttime retreat of your dreams.

Read more: The Best Bed Sheets for Every Type of Sleeper 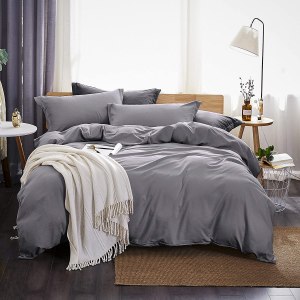 The Tissaj Duvet Cover is made in India from 100 percent pure organic cotton. Not only is this a healthier choice for your home, but it’s also a healthier choice for the environment. This chemical-free product boasts a production process that meets the top standards set by the Global Organic Textile Standard. The cover itself boasts a flawless and smooth exterior, which adds a touch of class to any bedroom interior, while the button closure and corner ties ensure the bed-making process is simple. 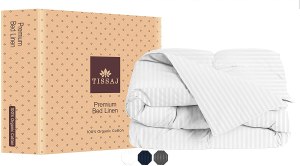 The FACE TWO FACE Duvet Cover is made from 100 percent washed cotton, which provides a softer in-bed experience than many competing materials. The kit includes a cover and pillows and gives an elegant look, regardless of which color or pattern you ultimately choose. The cover is also hypoallergenic, breathable and machine washable, ensuring maintenance is easy. It’s durable and fade-resistant, too. 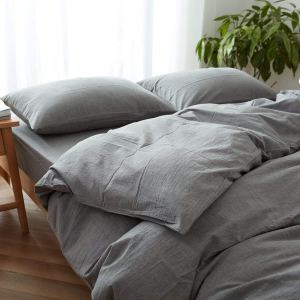 Some rooms cry out for a darker duvet cover. Unfortunately, most covers are only available in light neutral colors, but the ECOCOTT Three Pieces Duvet Cover Set is just the opposite. It comes in dark and moody colors, like this avocado green. This 100% natural cotton has a thread count of 210, meaning its super soft to the touch, and thanks to an innovative, environmentally-friendly cotton processing, this duvet cover won’t fade, even after numerous washes. As an added bonus, this piece also comes with two pillow shams for a more complete look. 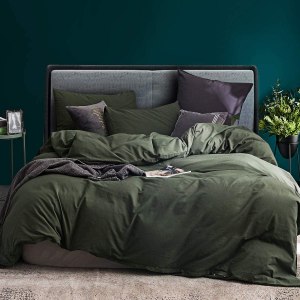 If you want to dress up your bed a little and go for something bold, this print from Brooklinen is a favorite amongst our editors. It’s the Terracotta Oxford Stripe, which basically means red striped pattern. Their Classic Duvet Cover comes in a wide range of colors but this limited-edition pattern is great for livening up a bedroom. You can pair it with bright or neutral sheets, and it’s available in a Full/Queen as well as King/Cali King size. 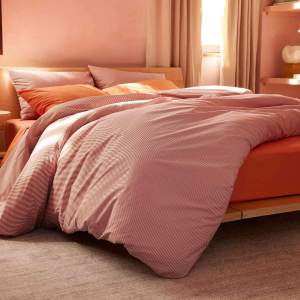 Woven from fine European flax, this DAPU Pure Linen Duvet Cover is made to keep you comfortable throughout the night. Whether you need a touch of warmth on a winter night or to feel some breeze on a warm summer’s evening, this advanced material can help you out. The 10 available colors make this a versatile option, which looks great in a range of interior decor styles. Furthermore, the hidden zipper closure helps keep your duvet insert in place during the night. 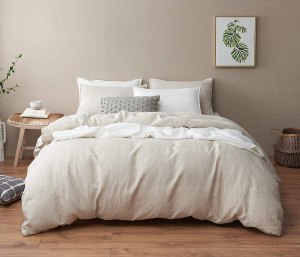 The Brushed Cotton Duvet Cover is available in three different color combinations, including white and ivory, surplus and ivory, and grey and coal. Each set includes a duvet cover and pillowcases, which are made from 100 percent cotton in a plain weave construction. The soft and cozy cover provides a cooling experience, while twill ties and a button closure ensure your duvet insert stays in place during the night. The classy designs are also reversible, providing two ways to dress your bed each night. 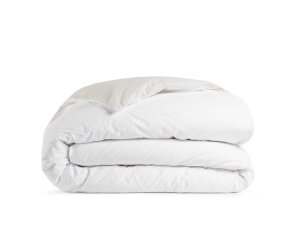 By using a mix of cotton and Himalayan cashmere, the Heathered Cashmere Duvet Cover offers supreme comfort through its unbeatable softness as well as through-the-night coolness from the breathable material. The cover includes duvet ties and a button closure to keep the insert in place. It’s available in four different color options and two different sizes and has an attractive heathered look thanks to the diagonal weave. 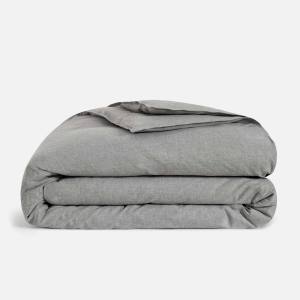 If you’ve got a smaller mattress or are looking for the perfect duvet cover for your son in college, this is a solid pick. The stripes come in a bunch of different colors including this dark gray, and the cover is made of soft microfiber that’s luxuriously comfortable while still being affordable. The set comes with one duvet cover and two standard shams for rounding out the look. 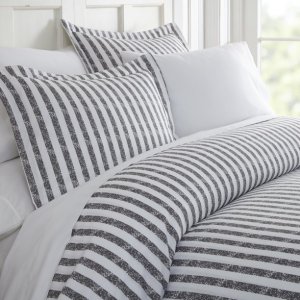 This beautiful duvet cover comes sized for a full/queen, so if you’ve got a queen size bed and don’t want to drown in your duvet this is a great option. The color is warm, inviting and a little bold so your bedroom will have life. It’s made of linen and rayon for a soft feel, and the backing is 100% cotton sateen that’s very comfortable to sleep with. It’s got corner and side ties on the inside so your duvet insert stays in place and it’s machine-washable so it’s easy to refresh if needed. 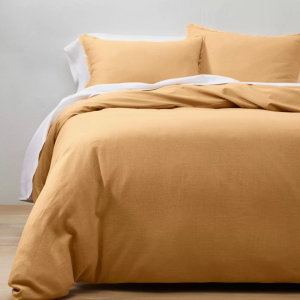 If you’ve got a king size bed and don’t mind splurging a little on your duvet cover, this one from Brooklinen is top-notch. It’s made of linen so it’s lightweight but still cozy, and works on warmer days and cooler nights so there’s no need to stress about the seasons. Each cover is dyed in small batches so it’s got some unique character to the pattern, and the linen covers come with bigger buttons that are easier to handle and won’t come undone as easily. 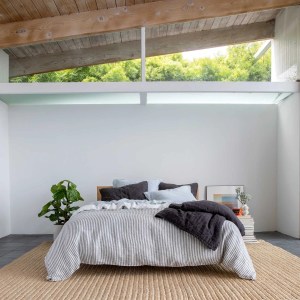