Fish are not only a beautiful addition to any home, but they’re also a pet that is easy to care for, making them a great option for people who travel often or lead busy lives. When it comes to purchasing a fish tank, there’s a huge range of options and price points, starting with the affordable and going up to hundreds of thousands of dollars. If you’re just starting out as a new fish owner or if you’ve had fish for years and are looking for an economical tank to house your beloved small fish, we’ve got some great options that are easy to use and will keep you and your fish happy. Fish may not be able to smile, but their owners can.

When looking for fish tanks, it’s important to know what type of fish you’re going to be housing before purchasing a tank. Not all fish tanks are created equal, and the larger the fish, the larger the fish tank required. What types of fish can live with other breeds of fish is also a big factor in deciding what fish to buy, with some fish prone to attacking other species. Even if fish are the same size, they may have very different requirements when it comes to their living habitat. For example, goldfish can survive in cool water or room temperature tanks, while tropical fish will require heaters.

Now that we’ve covered some ground rules for tanks and fish, let’s look at three tanks that will make a great addition to any home or office.

Featuring white and blue LED lights and a three-stage hidden back panel filtration system that is easy to use, the MarineLand 5 Gallon Portrait Glass LED Aquarium Kit is made with rounded corners that make it simple to enjoy watching your fish from any angle. Many customers describe the Marineland as an ideal beginner tank because of its size and affordable price. Some cons described by customers included the need to tone down the brightness of the LEDs so as not to annoy Betta fish, and the difficulty in cleaning the rear filter area by hand. Pros include the tanks ease of use and quick process from unboxing to setting up. 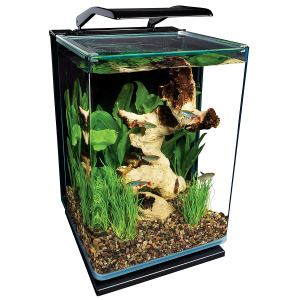 Built with a convenient feeding hole and featuring a LED light, the Tetra LED Cube Shaped 3 Gallon Aquarium with Pedestal Base comes with a Tetra 3i filter that will keep your tank clean enough to house tropical fish, goldfish or betta. Made from glass and acrylic, the tank measures 10″ D x 10″W x 10.512″H and hides the filtration system behind fun décor that includes statutes and trees. Pros of the tank include its whisper-quiet air pump driven filter. Some customers note that the tank could be improved with the addition of a heater and that the outside of the tank scratches easily. Customers also recommend only housing a small number of fishes because of the tanks limited size. 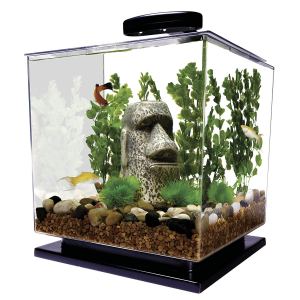 Using a waterfall effect that provides a constant flow of water, the Aqueon Betta Falls Kit is one of the most eye-catching tanks in its price point. The three separate tanks can house up to three small fish, including betta or crustaceans. The tanks are separated by frosted dividers, which make it impossible for the fish to see one another, therefore not putting stress on the fish. We like that the tank comes with cartridge, food and water samples to get users started. The kit does not come with any décor, which must be added separately. Many customers reported that they had to modify the tank to slow down the current so as not to agitate their fish. Some customers also found that their bettas were able to jump out of the top of the tank if it wasn’t secured perfectly. 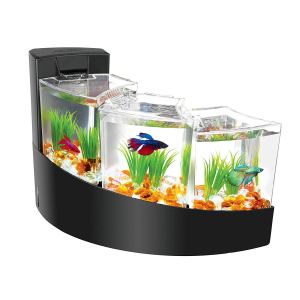