When I was in college, my roommate dated a Japanese-American grad student. One summer, he took a trip to Japan to see his relatives still living there. When he came back, he presented my roommate with what he saw as an amazing gift. No, it wasn’t jewelry or the latest Japanese fashion. It was a premium Japanese knife.

As college students, we didn’t really know what to make of this gift. That was until we actually started using the knife. This knife was life-changing. It was so much different than any knife we had used before, and we were whipping up homemade sushi and finely sliced meats and cheeses before we knew it.

So what makes the best Japanese knives so much better than a standard chef’s block? Read on to find out.

Differences Between Japanese and Western Knives

On the most basic level, Japanese knives are thinner and sharper than western knives. And, there are two main reasons for this.

As you can see, Japanese knives have both advantages and disadvantages when compared to western knives. But, if you want a sharp, lightweight knife that makes beautiful cuts even in difficult materials, you need one of the best Japanese knives.

When shopping for the best Japanese knives, you’ll notice that they have different names than you’re likely used to. There aren’t bread knives, chef’s knives or paring knives anywhere to be found. So, here’s a rundown of the most common types of Japanese knives.

In the USA, the most popular type of Japanese knife is the Santoku knife. That’s because this is the most versatile Japanese knife and the one that can function in a similar fashion to a chef’s knife. However, there are some key differences between the two.

While both of these knives are designed for slicing, mincing, dicing and chopping and they are both generally made from steel, Santoku knives are thinner with a straight-edged front blade in comparison to the slightly curved blade on a standard chef’s knife. Santoku knives may also feature a single bevel, rather than the double bevel found on chef’s knives. Finally, Japanese knives are almost always lighter to hold than their Western counterparts.

All of this means that Santoku knives are better at cutting meat, slicing cheese, mincing herbs and finely chopping vegetables, while chef’s knives are a better choice for disjointing meat and cutting through nuts. The latter also tends to be more versatile in the number of different cuts it can complete.

What is the Best Japanese Knife?

The best Japanese knife is ultimately the one that works best for you. Some people will prefer using a Santoku, while others may like a Gyuto.

When you’re picking out your Japanese knife, first ask yourself what you’ll be using it for and how often you’ll be using it. Then use the breakdown above to decide which type of knife is best for you. Once you’ve figured that out, you need to find the best knife in that category. This will ultimately come down to:

With the above in mind, take a look at the nine best Japanese knives available to order online. We’ve picked out a variety of models at a variety of price points, so hopefully, you’ll find one you love below.

People love the Shun Classic Eight-Inch Chef’s Knife, and it’s easy to see why. The all-purpose, eight-inch blade is made for all kinds of cutting tasks, from slicing to dicing. Furthermore, the blade is made from VG-MAX steel, which Shun has designed to include extra tungsten for a sharper edge, extra chromium for more corrosion resistance and extra cobalt for added durability. However, because this steel is quite delicate, be sure to follow the care instructions at all times. As a result, you’ll be rewarded with a long-lasting, lightweight knife that can accomplish all your kitchen needs. 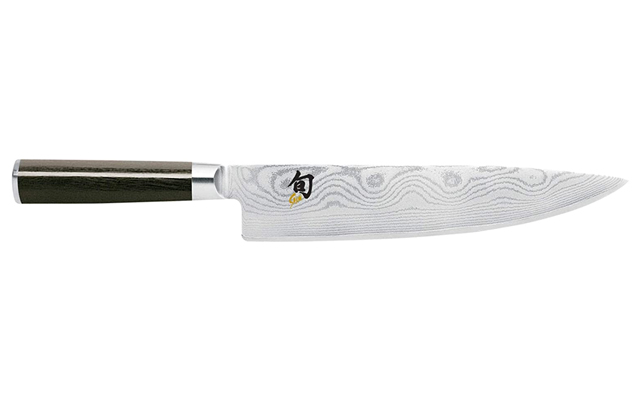 For a quality knife at a very attractive price point, look no further than the TUO Nakiri Knife. Designed for slicing and dicing vegetables, this Japanese knife is actually made from German stainless steel. The handle is made from high-density pakkawood and features an ergonomic grip thanks to the gentle curve. In addition, the length of the blade is a middle-of-the-road six and a half inches, which is adequate for most hand sizes. 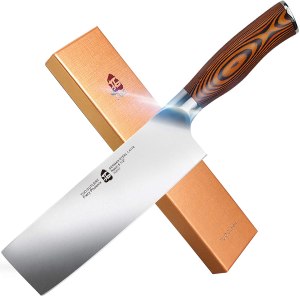 Most specialty Japanese knives, like Yanagiba Bocho, Takohiki Bocho and Fugu Hiki, cost hundreds, if not thousands, of dollars. For that reason, the Imarku Sashimi Sushi Knife, which is essentially a Yanagiba Bocho, takes the best value award on our list. At under $100, this knife will beautifully slice raw fish thanks to its 15-degree, single-bevel blade. This blade is made from high-carbon stainless steel and is 10 inches in length. 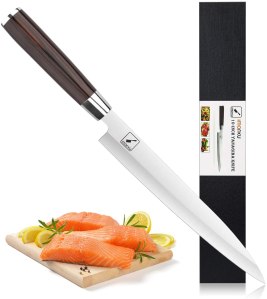 The Miyabi Evolution Knife Collection is made in Seki, Japan, one of the epicenters of Japanese knife production thanks to its long history of creating some of the best Samurai swords. The process to create these knives takes 42 days and more than 100 steps, including ice-hardening the blades to stave off corrosion. When ordering, you can choose between a variety of sizes, but we recommend the seven-inch Santoku knife if you want a versatile blade to accomplish most cuts in the kitchen. 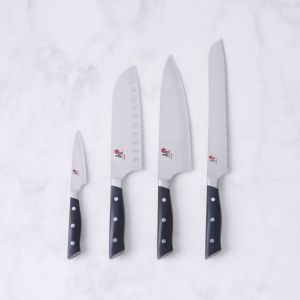 If you’re looking for a knife that will be unique to your kitchen, consider the VasverBlades Handmade Santoku Japanese Knife. This knife is forged in Russia using premium Austrian stainless steel in a Japanese Santoku design. The result is a super sharp, lightweight knife that won’t chip and retains its sharp edge longer than average. In addition, this Etsy seller will engrave the knife, making this a great gift for someone who loves to cook. 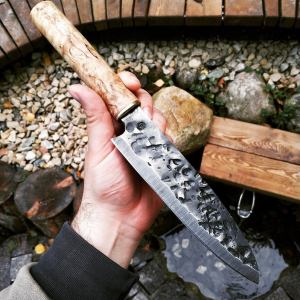 Although the Zelite Infinity Santoku Knife is made in China, it features an impressive, 67-layer Japanese steel with amazing edge retention. This ensures your Santoku knife stays razor-sharp for months at a time. In addition, the triple-rivet handle features an attractive metal mosaic which is a signature of the Zelite brand. Finally, the round handle and tapered bolster ensure this knife is balanced and comfortable in hand. 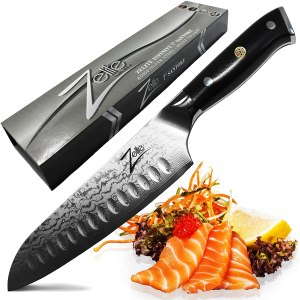 Because Japanese knives feature super sharp, lightweight blades, they tend to be prone to chips. That’s why the Global lifetime warranty, which protects against defects and breakage, is worth seeking out. In addition to this protection, you’ll also get a quality Japanese knife when you order the Global Eight-Inch Chef’s Knife. Although this is a hybrid of several types of Japanese knives, it was designed by legendary Japanese knife maker, Komin Yamada, and features a revolutionary straight edge blade in contrast to a normal bevel. This ensures the knife is super sharp and stays that way for longer than normal. 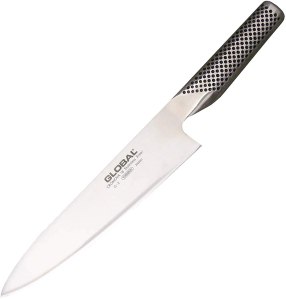 Kuro means black in Japanese, and that’s why these black knives are called the Kuro Series Knife Set. But, they don’t just look cool. These blades are made from zirconium dioxide, which is harder than Hagane and stainless steel with superior edge retention. The set comes with three knives, one seven-inch Santoku knife, one 6.5-inch Nakiri knife and one five-inch utility knife. All three are double bevel Ryo-ba blades and are presented in a handcrafted ash wood box. 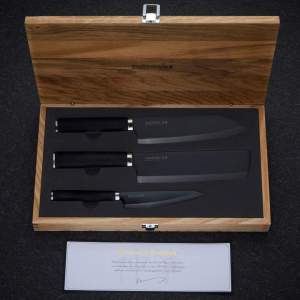 As you can see from the above, Japanese-style knives don’t have to be expensive, but if you really want the real deal, be prepared to spend a few hundred dollars. For an heirloom-standard knife, you may need to shell out more than $1,000, which is the case with the Kikuichi Cutlery Honyaki Series Yanagi. This sashimi knife features a hand-forged, single bevel, 9.5-inch blade made from a single piece of white carbon. This is really one of the best knives a professional chef can own. 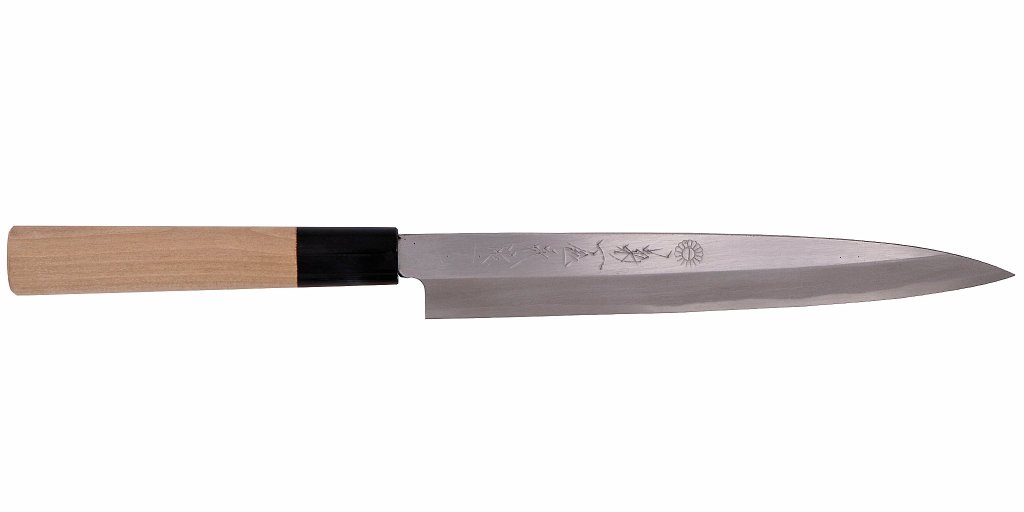 Expand Your Palate with These 8 Japanese Whiskies