If you find yourself waking up with bruises or stubbed toes after a midnight trip to the bathroom, it’s time to get an LED night light. An affordable and easy way to give some illumination to nighttime ventures, the best LED night lights are practical, provide an added level of safety and can make your home more comfortable for you and your guests.

Night lights in bedrooms may disturb your sleep sequence, but having a nightlight in your hallway or bathroom can make it easier and safer during late-night trips to the kitchen or powder room. A night light in common areas also provides illumination for pets, as well as house guests who may not be as comfortable with your layout. Night lights are also ideal for older homeowners and those with mobility issues who need extra help moving around in the dark but don’t want to wake the rest of the house’s occupants by turning on an overhead light.

New parents will also want to invest in night lights for their little one’s nursery. Night lights don’t affect a baby’s sleep in the same way that adults are affected. And for those late-night diaper changes and feedings, a low-level night light helps keep baby in sleep mode without fully waking them up, which is something you’ll grow to appreciate.

If you’re tired of tripping down your own hallway or want to make your home safer and more comfortable for guests, it’s time to get a nightlight. Or two. Check out our list of the best night lights with LEDs below.

For a light that will brighten any hallway or bedroom, try the GE Ultrabrite LED Light Bar. The horizontal design of the light bar means only one outlet needed is covered, leaving the second outlet unobstructed. The LED bulb has an extended life that doesn’t require frequent replacement. Customers can choose to set the light bar on manual or automatic, which means the bar will turn on when it senses ambient light darkening.

Pros: The 100-lumen Ultrabright bar is ideal for use over a workbench, in a garage or above a desk when extra light is needed.

Cons: The Ultrabrite isn’t dimmable and it’s so bright that some customers may be distracted by its use as a night light. 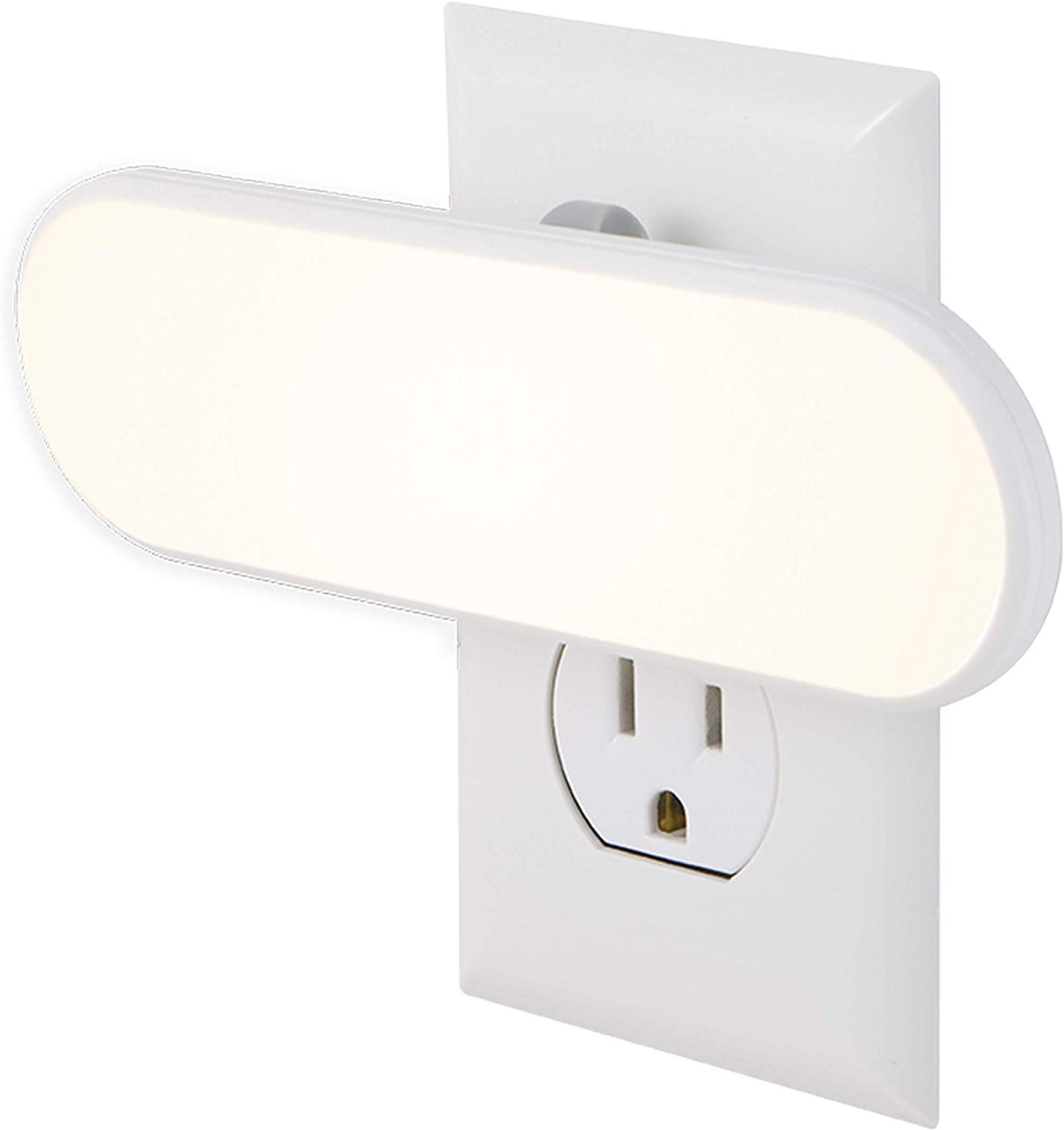 Have a light in every room or create a runway effect down a long hallway using the Emotionlite Plug-in Night Lights. The Emotionlite comes in a set of six and has a built-in dusk-to-dawn sensor that will automatically turn the light on when ambient lighting is darkened. The UL-listed Emotionlite has a 50,000-hour lifespan. Each light has a 0.3-watt LED bulb and gives off 2,700K for a warm and soothing glow. We also like that the Emotionlite won’t block a second outlet.

Pros: The Emotionlite have a convenient 360-degree swivel head that makes adjusting them easy.

Cons: Because the Emotionalite have a directional design, they aren’t ideal for lighting up a large area. 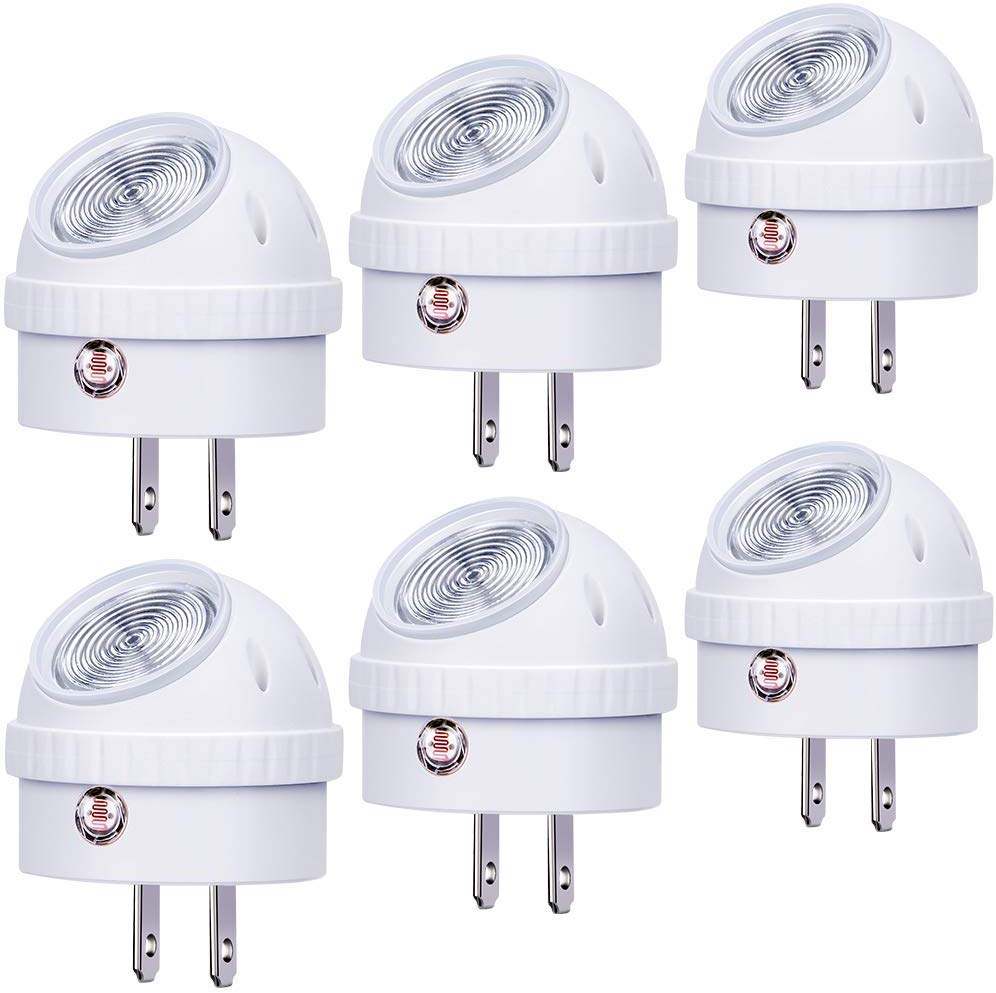 As easily the most customizable of our picks, this white square plug-in offers adjustable brightness and coloration with a side switch, so you’re able to set your most preferred night light look. It can go up to 50,000 hours without a single bulb replacement, which saves energy and money.

Cons: It’s more cool-toned, so it might turn some people away. 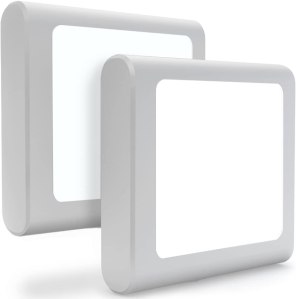 Add visibility to your nighttime routine — in color. Throw that classic soft-toned yellow light in the trash and snag this night light that has the functionality to change into eight color variations. You’ll never stub your big toe in the dark again, that’s for sure.

Pros: Unique from other night lights, has a ton of color choices.

Cons: Colors may not be your vibe, which is totally fine. If so, we suggest you go with a classic night light option. 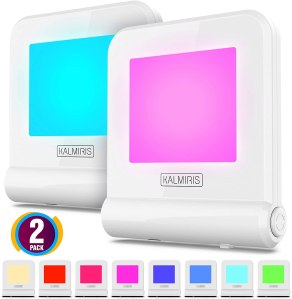 Whether it’s for the bathroom, living room or nursery, these LED night lights will really brighten up a dark room. This duo gives a four-brightness level functionality which is great for many situations. The overall glossy white finish really adds a sleek, modern element to the home too, which is nice to see in a world where night lights don’t offer much class.

Cons: This pack only comes with two, so if you’re looking for more, we definitely suggest you buy a bigger pack. 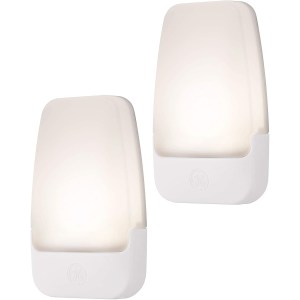 For a light that will activate once motion is detected, we recommend the AUVON Plug-in LED Motion Sensor Night Light. Sold in a pack of four, the Auvon can be set to manual mode and turn on with the switch of a button. Users can also opt to use the lights in motion sensor mode for a hands-free option. If the Auvon detects movement in the dark, it will turn on for 60 seconds and then turn off, helping to reduce energy consumption by 84% compared to night lights that don’t use motion sensing. The Auvon has a detection area of three to five meters and 120 degrees. Customers can choose between two levels of brightness.

Pros: Auvon is focused on safety and its lights are made with V-0 fire-resistant casing and over-current protection.

Cons: The Auvon give off a low light that may not be bright enough for some users. 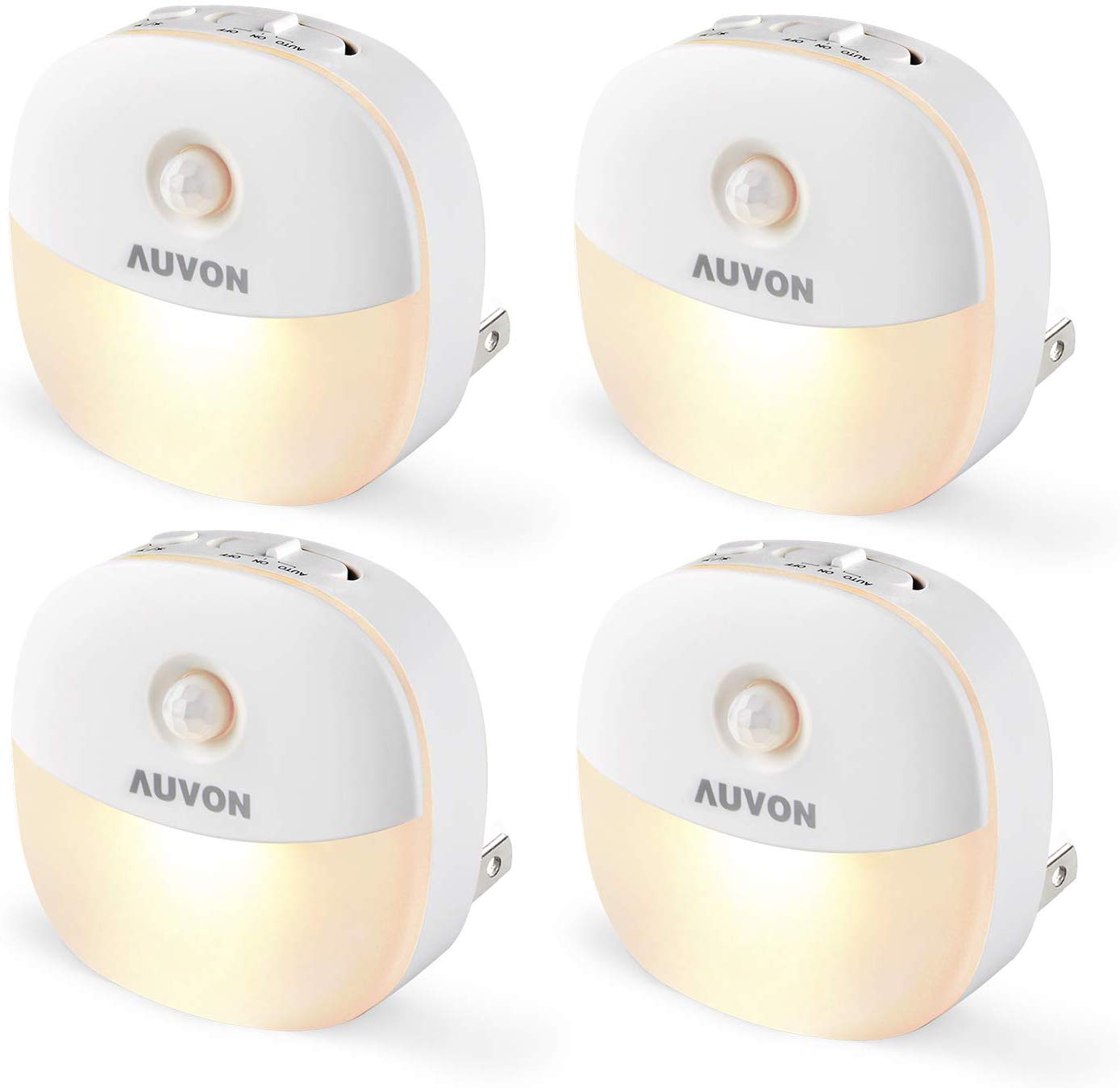 For a smart light that can react to its surroundings, try the SerieCozy LED Night Light. The SerieCozy will automatically turn on when ambient lighting becomes insufficient and adjusts its own brightness according to its surroundings. The SerieCozy uses an energy-efficient LED bulb that goes 360 degrees around the light-diffusing panel. The non-flickering uniform light is gentle on eyes and casts a soothing glow that is ideal for use in nurseries or in bedrooms at night. Sold in a two-pack, the SerieCozy won’t obstruct the second outlet and doesn’t give off a harsh glare. It’s also made with ABS plastic that is flame retardant.

Pros: The SerieCozy are available in a bright blue and pink light, a daylight white and a warm white, which gives off a yellowish tinge.

Cons: The SerieCozy are not UL-listed. 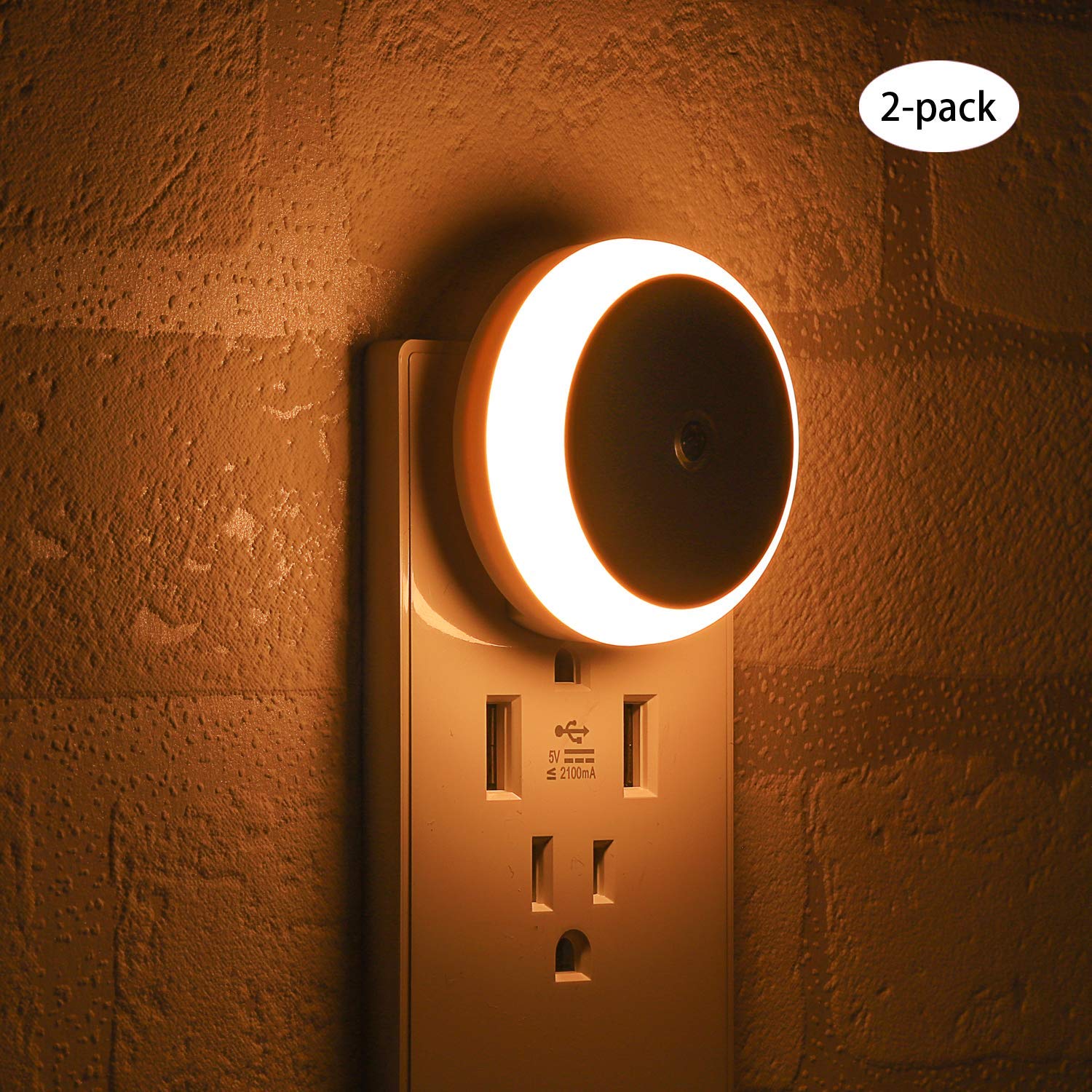