There’s a reason many stylish people adopt an all-black uniform — it’s easy, it’s cool and it carries a certain don’t-mess-with-me attitude. But there’s nothing that diminishes the cool factor of a perfectly tailored black outfit than little flecks of white. That’s why if you wear black, it’s crucial to keep a lint roller handy.

It’s also handy to keep a lint roller around for suits (of any color) since wool can be something of a magnet for lint and hair. Even if you keep your suit in a garment bag (which you should) it’s hard to totally prevent lint from showing up. If you’re suiting up for an interview or special occasion, it’s a good idea to keep a lint roller in your car or bag to give your suit a quick touch-up right before you go in.

It’s worth having a few rollers handy — one in the car, one at your desk, one in your travel bag, one at home, etc. Having this many lint rollers may seem like overkill, but they’re inexpensive, take up very little space and are a quick and easy way to ensure you look your best. You might also want to have different styles depending on the task.

Of course, no group needs a lint roller more than pet owners. If you have a dog or cat, you’ll find pet hair pretty much everywhere. Not only will a lint roller keep your clothes clean before you head out the door, but it’ll also be handy for fabric couches and even carpets and rugs. We’ve rounded up some of the best lint rollers you can buy.

For an easy, reliable option, this lint roller from Scotch-Brite has 60 easy-tear sheets for long-lasting performance and reliable results. The lint roller has a curved ergonomic handle for comfortable handling, and there’s a hole at the top that can be used to hang it or attach it to a string for easier carrying. It’s large enough to be used on sofas but small enough to be carried in a bag.

Cons: Not as eco-friendly as some reusable brushes.

If you want a reusable option, this pick from OXO is a good one to get. It has a comfortable soft-grip with a hanging loop, and the brush head uses a textured surface, rather than sticky paper to quickly get dirt, lint and hair off fabrics. Arguably the best feature is the included holster, which actually cleans the brush when you dock it. The bottom of the holster opens up to dump out lint and dust. 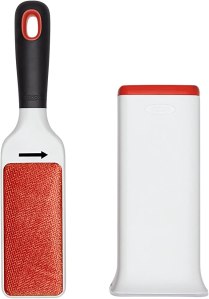 Lint rollers are handy for pet hair, dandruff and fabric lint, but they’re not necessarily as effective for pilling. Pilling happens to furniture and sweaters, and it’s when small fuzzy balls of fabric appear on the surface. This handy electric device from Conair gently shaves fabric to quickly remove lint and pilling. There are also multiple settings for a closer or more gentle shave. It’s available in rechargeable or battery-powered models, either of which will be easy to pack into your bag and take on the go.

Pros: Multi-use design makes it an effective solution for clothes and couches, and it can be used for lint, fuzzy fabric as well as pilling. Available in multiple colors as well as a rechargeable model. 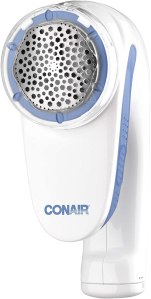 A clothing brush may be more old school than lint rollers, but it actually has some advantages that a lint roller doesn’t. Where a lint roller pulls lint and hair off the surface, a brush actually loosens trapped dirt and dust for cleaner, better garments. This compact brush is made by Kent, a storied British brand that still makes brushes and combs in England. The handle is made from cherry wood and the bristles are gentle enough for cashmere and other delicate garments.

Cons: Bristles made using boar hair, which some may object to. 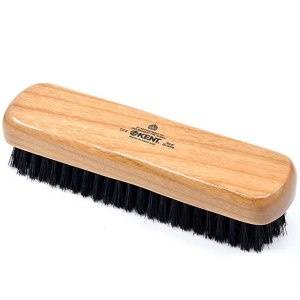 Remember what we said about having a lint roller in your travel bag? This is the roller that’s perfect for that. The ingenious design has a slider that pushes the roller out of the base and slides it back when not in use. That way, it’ll take up less space when not in use, and the head won’t stick to your bag and other stuff when you’re not using it. The compact cylindrical shape also makes it easy to pack. Scotch-Brite also sells refills so you don’t need to replace the whole roller.

Pros: Sticky brush head is housed inside the handle for easier transport. Cylindrical shape makes it easier to pack.

Cons: Still somewhat large for a travel size. Not as efficient as a traditional roller. 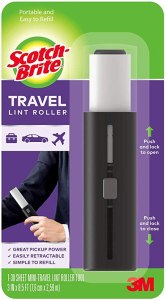 Most of the lint rollers and brushes on this list are designed for clothes, but if you have larger areas to work on such as rugs and couches, you might want this brush instead. It has a wider head to quickly cover more fabric. Unlike clothing rollers from which the head extends from the handle, this roller has a handle that is perpendicular to the head, making it easier to work in a back and forth motion. It uses small bristles and has an interior dirt collection chamber that’s easy to empty. Since it doesn’t use sticky sheets, you don’t have to worry about waste or buying refills.

Pros: Large head and ergonomic handle make it a good option for couches and rugs. Reusable design eliminates waste and the need to buy refills. Ideal for pet owners. 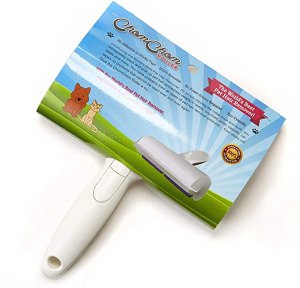 This compact and reusable lint remover is a good option for travel, and it uses a rechargeable battery for even greater convenience. It can be used for lint as well as fabric pilling, and the three blades make for more efficient and effective fabric shaving. A detachable cup collects the lint for easy cleaning. The entire unit weighs just over 8 ounces, so it’s easy to pack in your daily bag or travel bag.

Cons: Since it uses a rechargeable battery, you may have to replace the entire unit should the battery stop working. 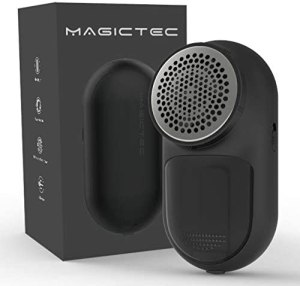