It’s inevitable that when the weather begins to cool, rodents and other types of vermin will start to seek warm shelter — and what’s warmer than our homes? While we really don’t want unwelcome guests of any kind, these are uniquely unwanted pests that can be as embarrassing and unsightly as they are invasive and unsanitary and even dangerous.

Of course, there are many types of traps out there, and some are far less humane than others (we’re looking at you glue traps). Old-school mouse traps either involved snapping the poor little guy in half or trapping him on a glue pad where he would struggle for freedom until she starved to death. Both are terrible ways to go, don’t you think.

The more obvious day-to-day precautions include keeping all food (for you and pets) in airtight containers, maintaining an almost unrealistic level of cleanliness, and keeping trash cans — both inside and out — closed with lids that seal shut.

Here’s the thing, we’re only human, so unlike mice, we have a lot more to focus on than eating and staying warm, so sometimes we slip up, allowing mice to take advantage of our unintended hospitality. So even as major animal-lovers, we understand that sometimes, you need a way to get rid of any mouse that slipped through the cracks, literally. When researching mouse traps, there are several varieties you’ll come across.

More on Catch and Release Traps

Whereas catch-and-release style traps are much better for the mouse, it’s not as easy as just opening the back door and letting them run free. According to a study conducted by the CDC, although the house mouse is the most common mouse that comes inside (go figure), the deer mouse is also a pest to deal with, especially in more rural areas. What makes these little guys more of a problem is that they have superior navigation skills.

“The mean distance traversed by the five deer mice that returned to the house was at least 394 meters; one mouse returned after being released 500 m and 1,000 m, then 750 m, and 1,200 m from the house at consecutive daily trapping sessions of 3 days,” the study explains. “Each of the mice returning to the house did so within 24 hours of release, two as few as 6 hours after release from 500 m and 750 m away.”

However, People for the Ethical Treatment of Animals (PETA) suggests releasing no more than 100 yards away to keep the mouse from becoming disoriented and vulnerable to elements, predators and starvation. The animal rights group advocates for releasing mice the proper way, but it does note: “Rodents can also be humanely euthanized by a veterinarian or at a local animal shelter.”

We’ll leave it up to you which way you want to get rid of these potentially disastrous little pests, but whichever way you choose, you’ll find the very best of the best down below.

Rodents are unwanted visitors, but that doesn’t mean we have to kill them. This trap is an affordable alternative solution and it’s about as humane as it gets. Not only does it not kill or harm the mouse, it even has ventilation so they can breathe while awaiting their release. This trap is an affordable alternative solution, and it works thanks to having a very sensitive trigger at only 0.03lb. As a former New York City-dweller, one SPY team member has used this trap on and off again for years and has never disappointed. It doesn’t use poison or glue, so it’s completely safe around children and pets. It’s also a no-touch design, which means it’s cleaner and safer when it comes time to empty it out. All you do is place and set the bait in areas with mouse traffic, and when a mouse is trapped inside, head out as far away as deemed appropriate by the instructions and release. You can clean and reuse the trap many times — and nothing has to die in the process! 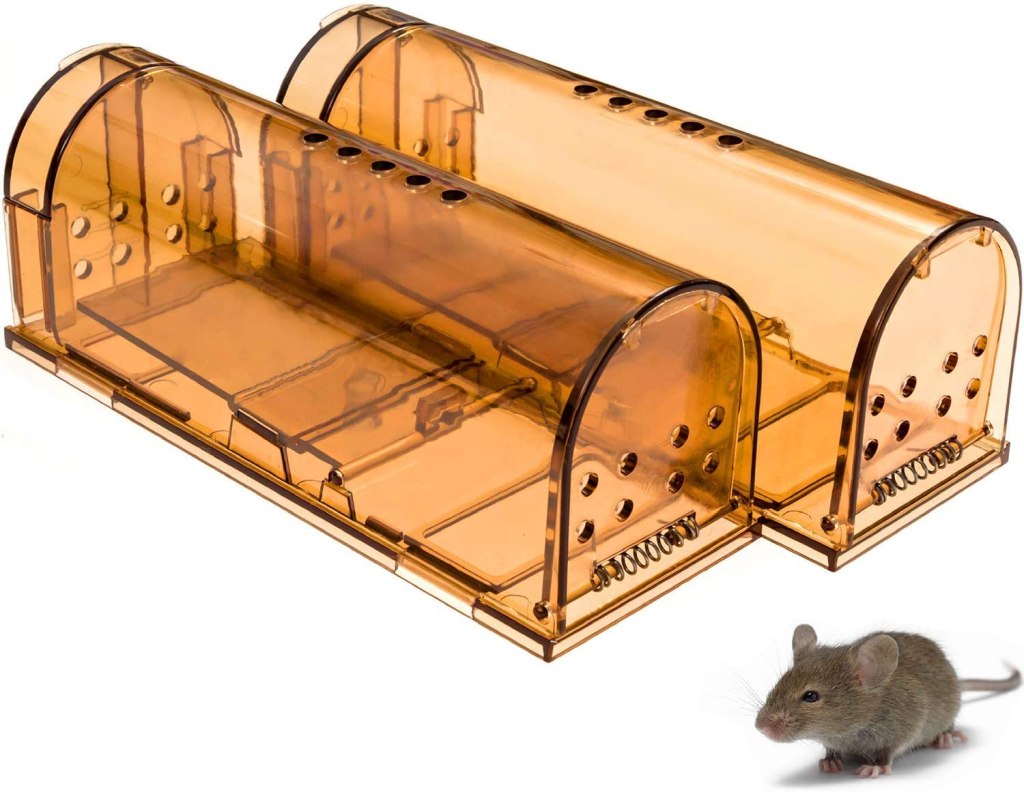 You don’t get much easier than these traps. No bait; no snaps; no mess. And there’s a clear view window at the top so you can easily see if there’s a mouse inside that needs to be removed. This can easily capture multiple mice at once, which makes it ideal for areas with an infestation, and then the mice can be either released away from the home or disposed of. It’s humane, convenient, and effective — what else can we really ask for when dealing with pest control? 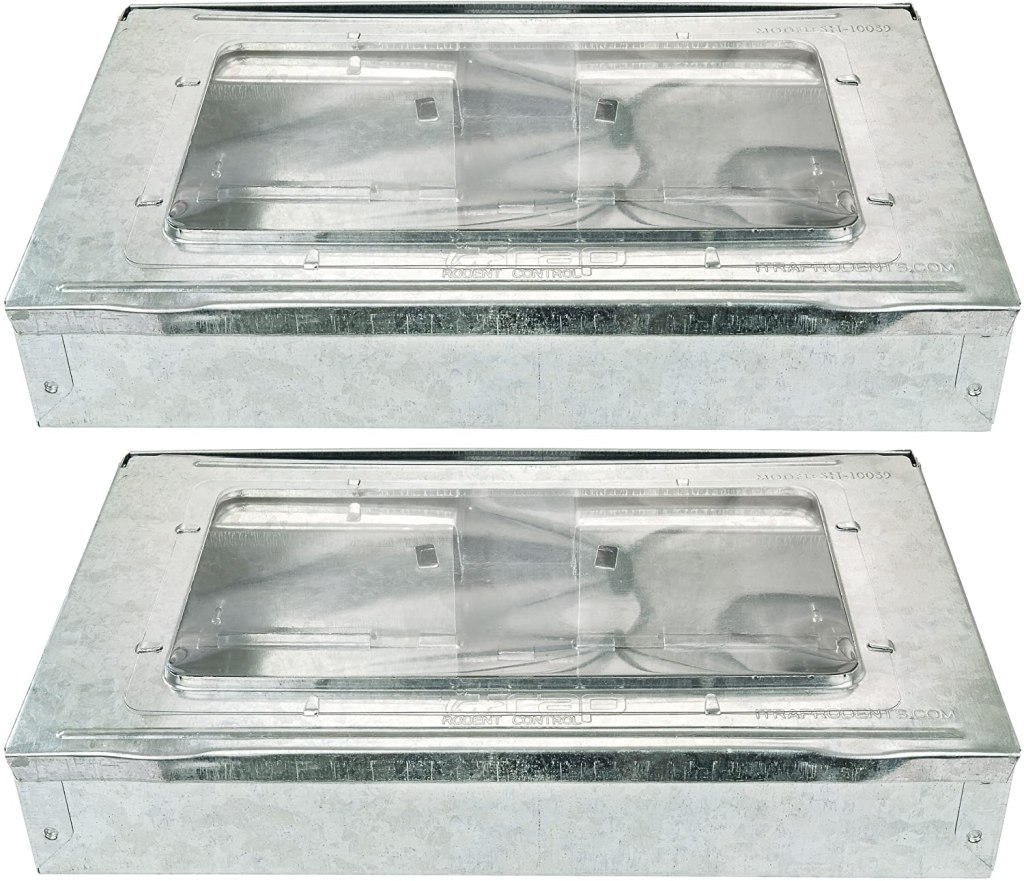 As a top-rated trap on Amazon, this type of trap is as quick and clean as killing can be, if killing is our only option. It senses when a mouse enters the trap, and quickly kills it with a high voltage shock. No poison, no chemicals. It then offers a no-touch, no see disposal option. Just empty into the trash, clean, and re-bait. You’re done. If only all household problems could be dealt with that easily…

If going the poisoned bait route, this is a really top-quality option. Fill the mouse bait station with the bait. The mouse then eats it and should die within 24- to 48-hours after eating it. You can also look at the see-through lid in the bait station and see how much bait is left inside, and refill as needed. Of course, this does mean you may find a dead or dying mouse elsewhere in your home, and it is not a trap, but usually mice take bait back into their nest and share with other mice hiding in the walls in the process. This, whole gross to consider, is a quick and efficient way of dealing with what could be a much bigger problem. 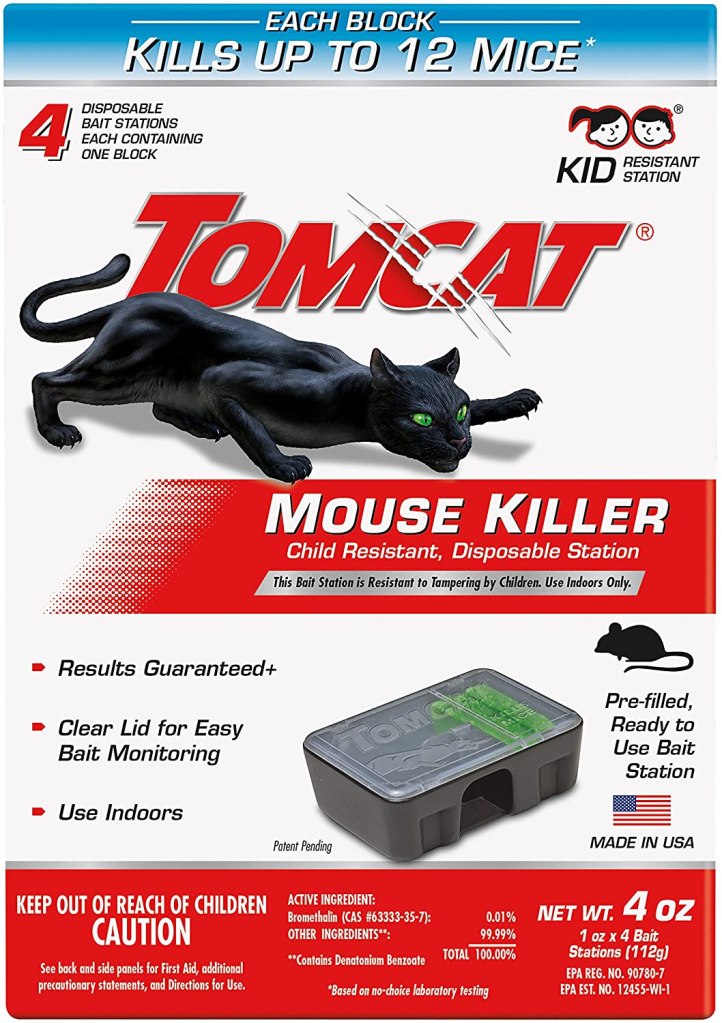 It’s hard to say what’s the worst part of having a mouse in the house. It could be when you first see it scurry across your kitchen. But the moment when you need to dispose of a dead mouse is pretty high up there as well. This offers the quickness of a snap trap without the risk of yourself triggering the snap or having a gruesome mess to uncover. This covered snap trap is disposable, allowing you to throw the whole unit away once the snap has been triggered. The bait is inserted at the bottom of the trap, too, so no risk of snapping your finger as you bait, which can be a risk with other types of snap traps. Then, when the trap is triggered, you can dispose without ever touching and seeing the body. That’s ultimately what we’re all hoping for, aside from having no mice around at all. 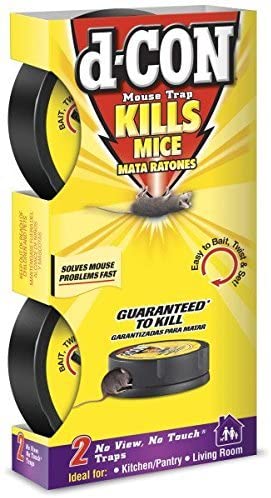 Sometimes you just need the old-school way of getting rid of mice. Quick to kill and kid and pet safe (although perhaps painful to your pup or cat’s nose … the first and only time) these traps are pre-baited and inexpensive. However, just as nothing in life is ever free, you will have to look at that dead mouse after it’s caught. If that doesn’t bother you, this might just be the best investment you’ll make. 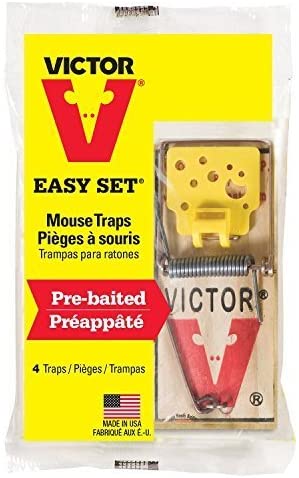