Your home should be your sanctuary, the place that houses your favorite things like your bed, your couch, your comfortable sweatpants, and your ideal shower. Typically, we have to book a stay at an exclusive five-star resort to get a shower experience like the ones we see in hair commercials. Well, it’s time for your close-up, because we’ve found rain shower heads that are going to make you excited to get up in the morning. Or go to bed at night if you’re more of an evening shower person. With these shower heads, you may be increasing your bathing ritual to twice per day.

Rain shower heads are an easy and inexpensive way to turn your regular shower into a spa-like experience. Because of their extended size, rain shower heads provide wide coverage, which means no more constant circling in the shower to keep your entire body warm and covered in water.

What To Look For In A Rain Shower Head

It’s essential to take note of the size of your bathtub or shower stall when deciding on which shower head to purchase. Smaller showers may not be able to contain the wider coverage of oversized rain shower heads.

If you don’t already have a ceiling attachment for a rain shower head, you can still use your existing wall attachment. We recommend purchasing a shower arm extender to use if a ceiling shower arm is not already installed to achieve the waterfall effect, with the extended arm allowing the shower head to sit in the middle of your shower and drop water directly downward instead of on an angle.

How We Chose the Best Rain Shower Heads

We’ve included several sizes of rain shower heads below, ranging between 6 and 12 inches. Depending on the size of your shower and the attachments already installed, you’ll want to pick a shower head that works for your space and existing plumbing. All the shower heads on our list are easy to install and can begin working instantly.

Easy to install and perfect for providing a feeling of luxury, these are a few of our favorite rain shower heads on the market right now.

The DreamSpa comes with a handheld attachment that combines the best of rainfall and traditional showers. The handheld attachment works with push-button flow control and can be used as an overhead shower head. The nine-inch rain shower head has rub-clean jets for easy cleaning and a solid brass ball joint for a leak-free connection. No tools are needed for the matching chrome combo, with the shower head easily attaching to any overhead shower arm. The DreamSpa also comes with a water restrictor, which makes it great for homes with anyone who likes to linger.

Pros: Includes two heads, a rainfall head, and a detachable head. Designed to be easy to install.

Cons: Both heads can’t be used at the same time. 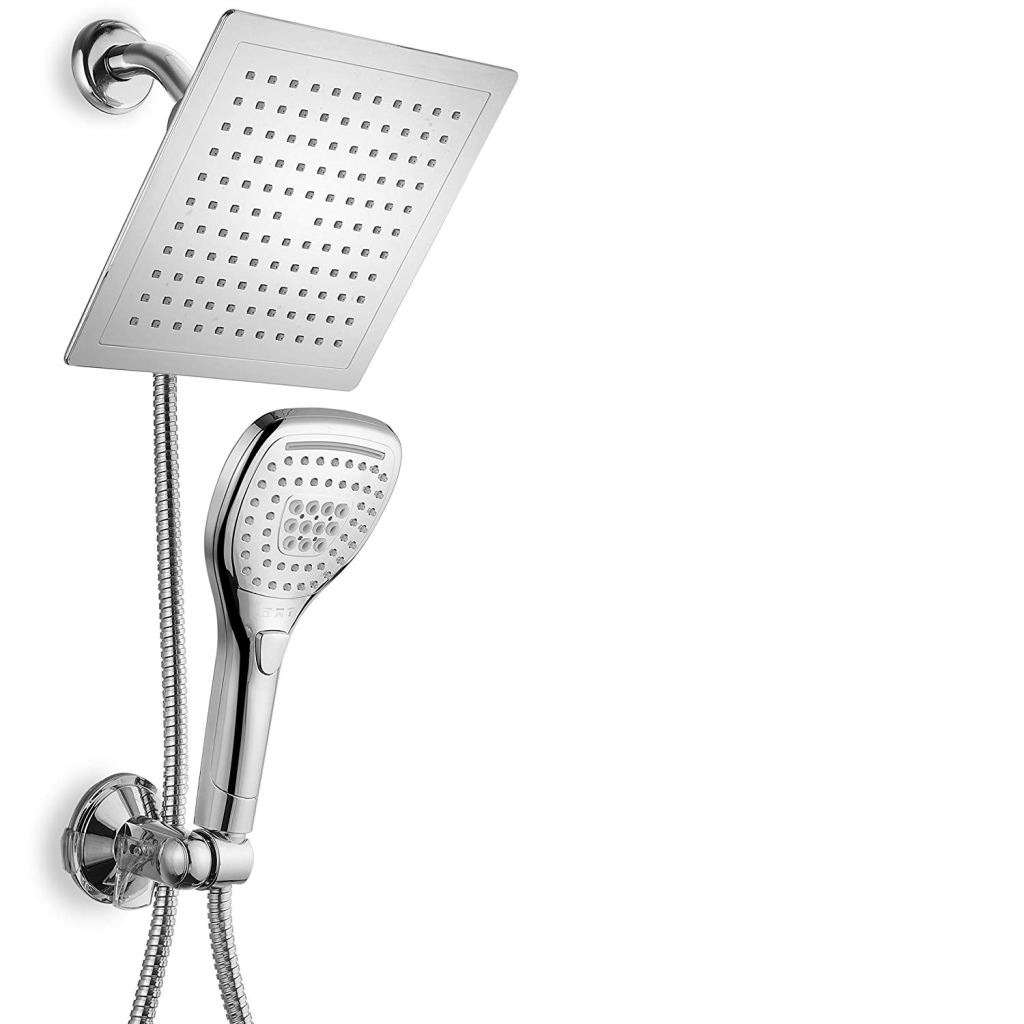 Voolan’s shower head has several unique features that make it feel like standing under actual rain. First, the square head is a sizeable 12 inches, allowing you to be fully covered by the water. The pipe also has a curved neck, meaning that the water falls straight down, rather than at an angle like traditional shower heads. It also has a stylish, polished stainless steel finish, giving it a modern and luxe look.

Cons: May not fit on every shower. 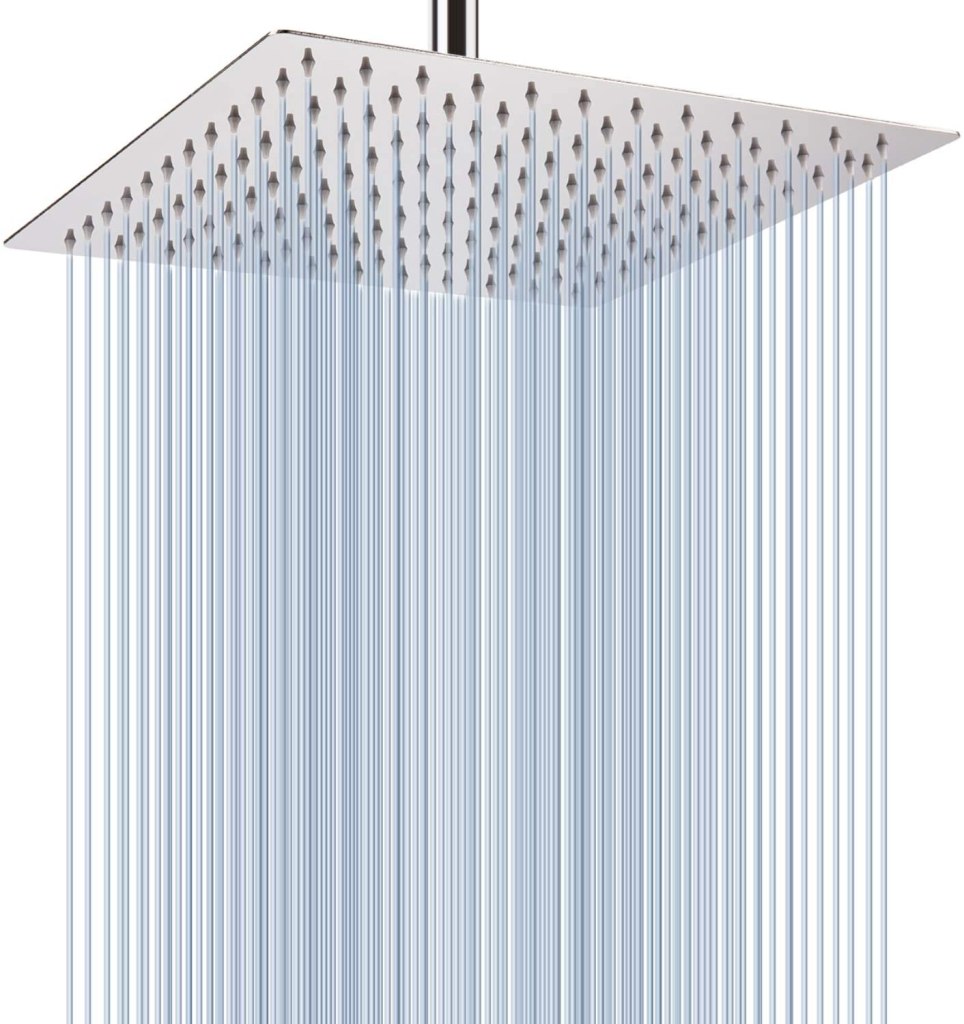 AmazonBasics makes a wide range of home goods, including this simple and stylish shower head. The shower head is round and 6 inches in diameter, and it has a stylish polished chrome finish. The shower head itself rotates, so you can install it at your desired angle or the angle that works best for your existing plumbing.

Cons: Some may prefer more pressure.

Buying a rain shower head can be affected by the angle of your shower pipe, which is why the design on this option is so innovative. It has an arm with multiple adjustable joints, so you can set the shower head to your desired angle. For example, if you’re taller and have a smaller shower, you can angle it higher so you can fully stand under it. The nozzles are designed to be self-cleaning and the head is corrosion and rust-resistant, making this a low-maintenance option.

Cons: As the pipe isn’t solid, but instead has joints, there are more opportunities for leaks. 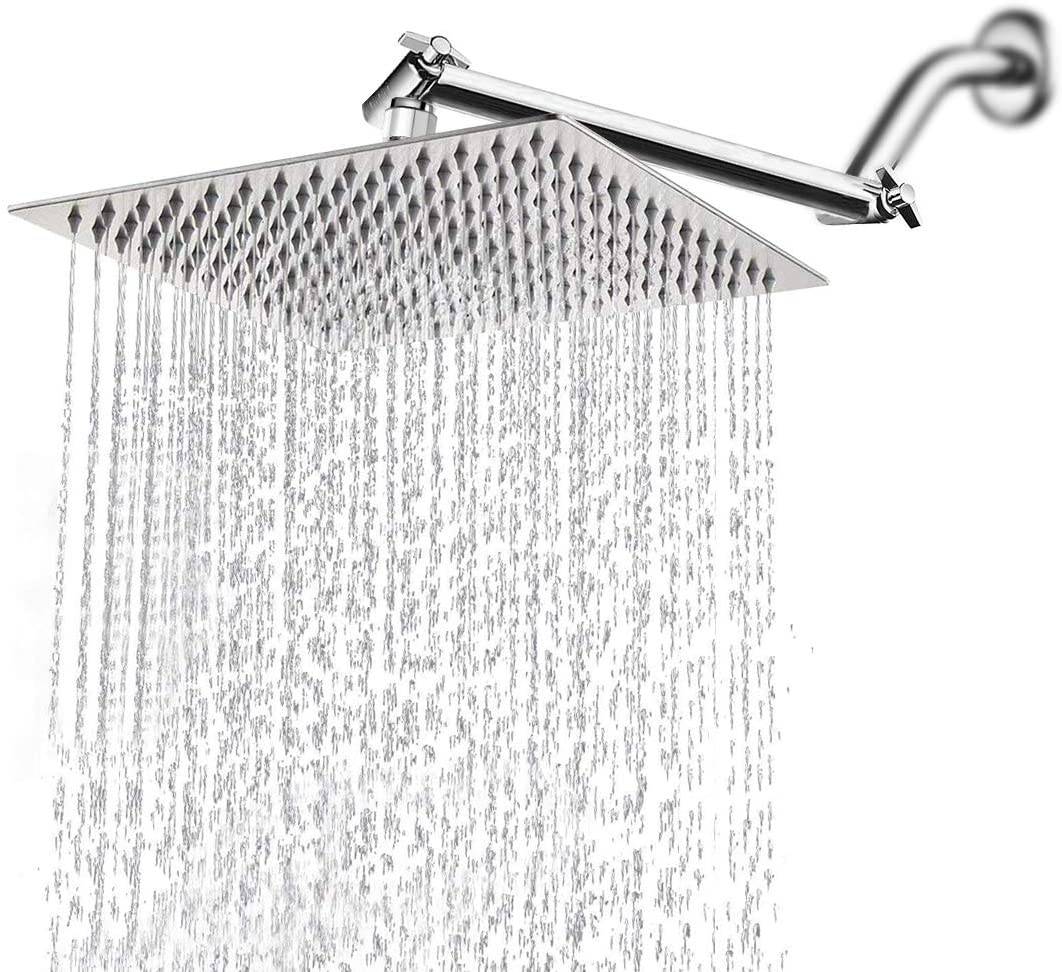