Showers can be just as relaxing as a bath if you have the right shower head to deliver reliable pressure, consistent streaming and, if you’re lucky, an invigorating massage. Turn your shower into a sanctuary this week, and make it a task you look forward to doing after waking up, or after a long day.

Making your shower a place you want to be and hang out in will be worth your while, and something your future self will thank you for. The most important part of creating a shower oasis is a good quality shower head. We’ve narrowed down the top three high pressure multifunctional shower heads on the market that will meet your showering needs.

The YOO.MEE High Pressure Handheld Shower Head delivers high pressure water power that cuts your showering time down significantly. If you have lower water pressure in your home, this shower head is able to provide high pressure water flow despite your home’s water pressure problem. The shower head can be set to three settings: powerful shooting, if you want a power wash, a pulse massage for relaxing your muscles, and a mixed setting.

The shower head’s 6.58 ft lightweight hose makes it easy to maneuver, to wash all those hard to reach spots. It also comes with two extra hose gaskets, and a water flow regulator. This is a great universal shower head for those in your household who like powerful showers, and those who like a more massage-like water flow. 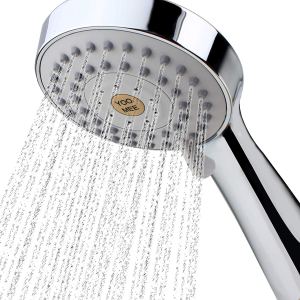 If transformers came in shower head form, the Hydroluxe 1433 Handheld Shower Head would be it. It comes with two heads – one over head and the other hand-held. Each shower head comes with five settings. You can set your overhead setting to power rain, for example, while the hand-held one is set to massage. You can switch up your shower routine every time by choosing from one of the 24 combined water flow patterns. If you have someone tall in your household, and someone on the shorter side, the angle-adjustable overhead bracket makes it easy to adjust to your height.

Sometimes fancy shower heads can seem intimidating to install but this one comes with easy to read, step by step instructions with diagrams. One of the best qualities about this shower head is that it comes with a limited ten-year warranty, so basically you won’t need to be buying a shower head for the next decade. 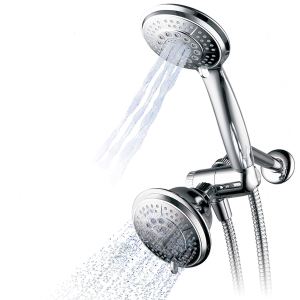 The AquaDance Premium High Pressure Rainfall Shower Combo provides the best of both worlds between an overhead rainfall shower experience and a detachable shower head. Each shower head has six settings that range from power rain, pulsating massage, power mist, rain massage, rain mist, and water saving pause mode. This shower’s high range of settings and adjustability ensure all body parts will be covered with water throughout your shower. It also comes with an angle-adjustable overhead bracket, and a 5 ft. hose that allows for you to point each shower head in whichever direction desired. It’s most importantly, easy to install, and fits most standard shower arms.

If you run into any issues with your shower head you get a limited lifetime warranty and access to customer service support. If you can’t decide between a rainfall shower head, and a detachable one this shower head gives you both for the price of one. 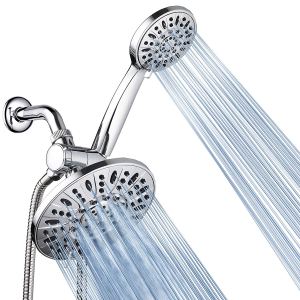