Chess has gotten plenty of buzz lately, thanks to the hit Netflix show The Queen’s Gambit. But it’s hardly a comeback, and definitely not a trend. After all, chess has been around for thousands of years, and it’s not going anywhere anytime soon.

The origins of Chess are up for some debate, and it’s unclear when the rules became codified as the game we play today. But it does have antecedents in a game called chaturanga, a game that was played in India in the 7th century. It was many, many years before the game was played by the formal rules we use today. For example, it wasn’t until about 1300 that the pawn could advance two spaces on its first move. But even then, it took hundreds of years for that addition to become widely accepted.

These days, you can find chess sets in just about every variant imaginable, from small plastic sets you can take on the go to luxurious sets that make impressive gifts to novelty sets that are sure to get a laugh. We’ve rounded up some of our favorite unique chess sets that you can buy right now.

Now this is a unique chess set fit for the Mother of Dragons, or any one of us plebs. Tipping the scales at 23 lb., CHH’s 3D set features pewter pieces and a glass board set atop the skeleton of two fallen dragons amidst the remains of what appears to be a burnt down village or castle. Never again will you ask where your dragons are. 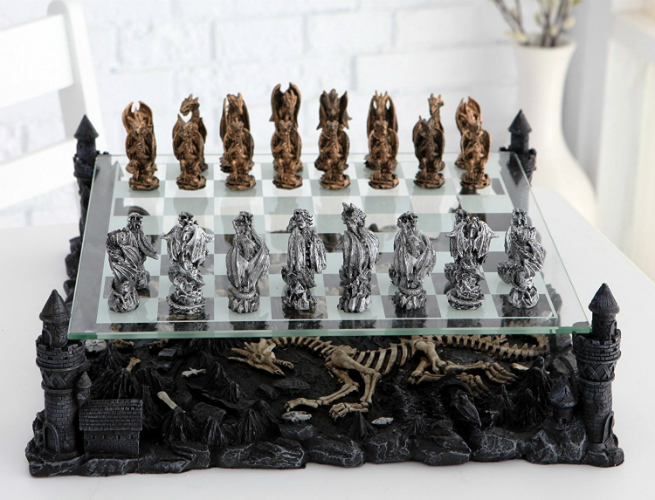 If you’re a true chess addict, you’re probably looking for ways to play wherever you go. This roll-up chess set is portable, so you can play wherever you are. It’s made from luxe suede and has buckles that hold the rolled-up set closed when not in use, making it a lot more stylish than the average chess set. Instead of traditional pieces, this set has round tiles, similar to checkers, that are printed with a design of the piece they represent. The zip pocket holds the pieces, so you’ll never lose them. 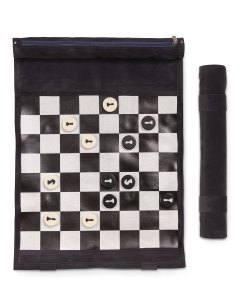 Sure, novelty chess sets are fun. But sometimes you want a traditional set with pieces that you can immediately identify. This stylish set from Cardinal includes a folding tournament-sized game board, and chess and checkers pieces are included. The board is made from MDF with a painted wood finish, and the tan and brown pieces have a classic, rustic look. 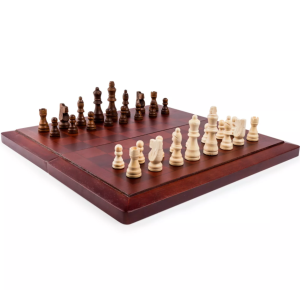 Hydra and the Avengers go head to head in this Marvel-themed chess set, complete with 16 unique characters. The good guys include The Hulk, Black Panther, Iron Man and Captain Marvel, and the rogues’ gallery includes Kingpin, Thanos, Venom and Hela. The pawns are represented by pieces featuring the logos of each respective side. Since no characters repeat, you might be wondering how this set is actually playable; each bust sits on a stand that features an emblem depicting the piece they represent. 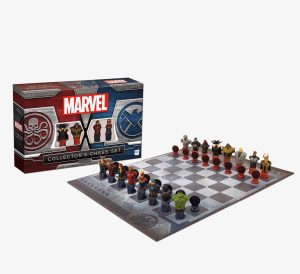 This chess set from CB2 is made from marble, giving it a luxurious look that makes it a great gift. True to CB2’s design ethos, this set has a modern, minimalist look, with sleek and simple pieces. They’re not too minimal, though — they have enough detail to be fairly easy to identify as knights, bishops, queens and kings. The board is 12 x 12 inches, so it’ll be a nice addition to your coffee table without taking up too much space. 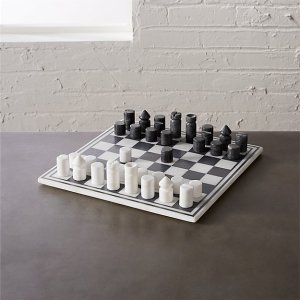 Whenever you see chess players, they look incredibly focused — but wouldn’t it be funnier if they were absolutely trashed? That’s what this chess set from True brands asks. Instead of pieces, this set uses shot glasses, which have a printed design of the piece they represent. The glass board has frosted and clear tiles, making it a stylish addition to any table. 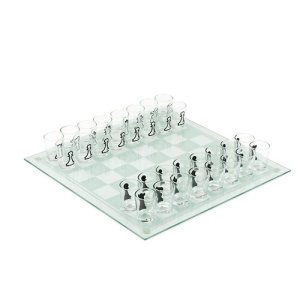 If dragons, ancient Egyptians, and wizards aren’t your thing, what about Roman gladiators? Set amongst a resin replica of the Roman Coliseum, each Gladiator is made from pewter and is said to be historically accurate. How can you not be entertained by this set? 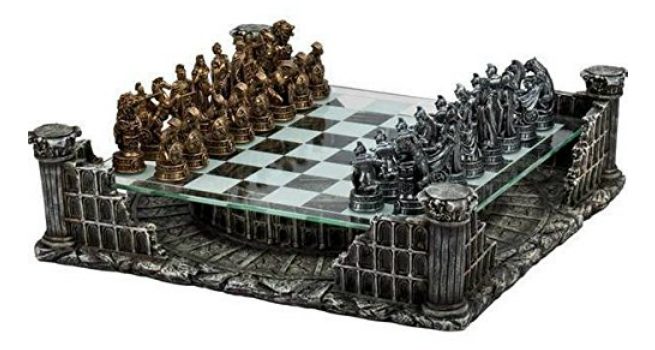 MAGNETIC BOARD AND PIECES

This unique set is available from REI, and it’s intended as a camping and travel set. The board folds in half for easy travel, and it has a magnetic surface that keeps your chess pieces in place until you’re ready to make your next move. The board has black and gray tiles and the pieces are black and white. The set comes with a handy mesh carrying pouch — whether you want to face off in the backwoods or the backyard, this set is ready for it. 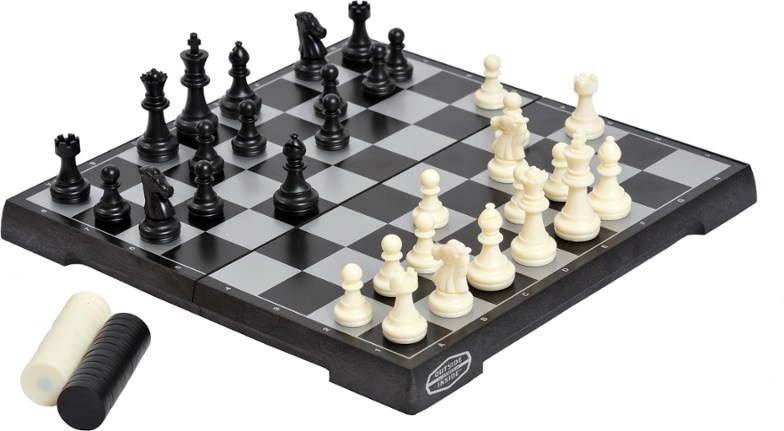 REI Outside Inside Chess Set

If any of the above sets weren’t doing it for you, then this one should. CHH’s Deluxe Egyptian Chess Set does not disappoint, and it most definitely lives up to the deluxe tag. With hand-painted pieces made from polystone, which is a mixture of polyurethane resin and powdered stone, each piece will feel like porcelain. The added weight to each piece ensures this board’s playability and longevity. Golden Sphinxes adorn each corner of the board, and the board lifts for easy storage. Deluxe, right? 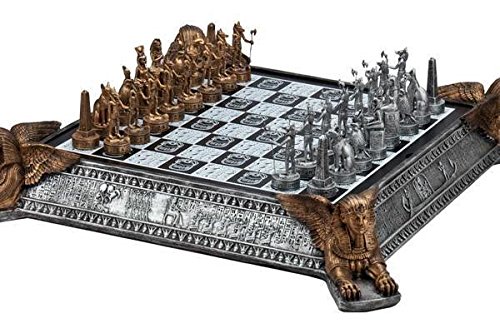 This chess set is a great gift for any science enthusiasts in your life. The black and white pieces are laboratory themed; there are Erlenmeyer flasks, microscopes and bunsen burners. Half of the pieces are white and the other half are black. Instead of a traditional checkerboard design, this board has raised squares, giving this board a unique three-dimensional look. The board is 5.5 x 5.5 inches, so it’s on the smaller side. 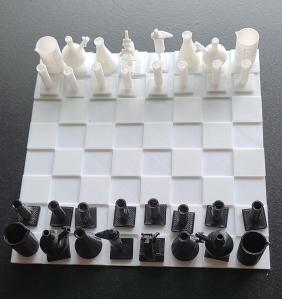 And last but not least, a giant chess set with a 25-inch tall King! This set will go just about anywhere you have the room for it, be it indoors or outdoors. With a playing board that’s made from a heavy-duty nylon and pieces that are made from high-density plastic that’s UV protected and waterproof, you and yours will have loads of fun playing on this set for years to come. 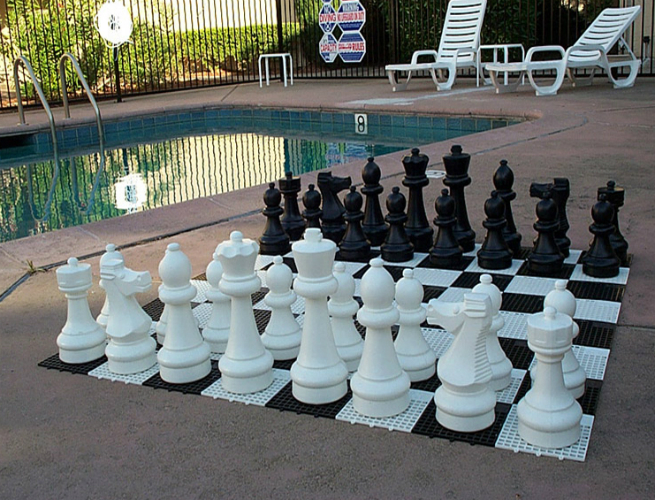 The Best Backgammon Sets to Buy