Halloween is only a few months away, and that means it’s time for the spooky superfans to start preparing. Getting ready for the spookiest day of the year can involve many things. It might mean scoping out the best Halloween candy, sour or otherwise, for giving away to trick-or-treaters. It could mean finding a topical, clever Halloween costume for men that’ll entertain everyone at the party. It might also mean practicing your scariest “BOO!” for pulling the old jump-and-scare practical joke on your friends, or brushing up on your Halloween makeup skills.

However, everyone knows the true test of a Halloween devotee is how well your yard, home and/or apartment is decorated for the big, spooky day. Sure, you could go simple with some string lights, carved pumpkins and a skeleton or two. Or, you could treat the world as your creepy, crawly, blood-curdling oyster and go big. Like, really big. Ridiculously large Halloween decorations have become the latest trend in the festive space, and we’ve rounded up a whole bunch of options for Halloween 2021.

In case you’re not aware, 2020 was the year of the giant skeleton. Home Depot’s 12-foot tall skeleton, to be exact. He took the decorating world by storm when he made his debut, and this year he’s back with an equally-as-tall and somehow even scarier friend. Both of these gigantic decorations, however, are sold out, so we’ve gathered some larger-than-life alternatives below. If you’ve got the space for any one of these pieces in your outdoor space they’d make excellent decorative centerpieces, and some can take care of your entire decorating scheme in one fell swoop.

It’s no 12-foot tall gargantuan, but it’s a spooky LED tree that’ll brighten and darken your yard at the same time this Halloween. It’s got warm purple lights that’ll cast an eerie glow on your yard as trick-or-treaters walk to and fro, and it’s made of durable tinsel with a weather-resistant coating for withstanding the elements. It’s got a resilient metal frame to keep it standing tall, and the decorative silhouette will give your yard a more polished look. 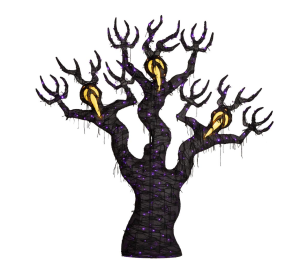 This large hanging Halloween ghost decoration is almost 14 feet tall, and is perfect for an entryway, hallway or other spooky entrance you want to adorn with a dark, mystical figure. It comes with a simple design, just a mask and large piece of polyester cloth, but combined together they make for a chilling effect. You can easily fix it to a tree, veranda, porch or balcony, and it folds up compactly for year-round storage. 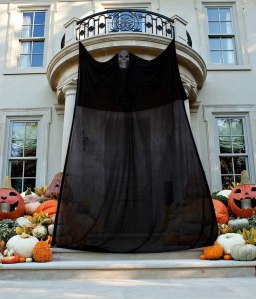 This is another large, haunting figure you can easily place in your yard, on your porch or even in your entryway if you’ve got tall enough ceilings. It can utter spooky sounds, turn its head and flap its wings for creepy effect, and it’s got an IR sensor that activates when people are around to spook visitors when they’re least expecting it. It’s got integrated LEDs for a ghostly glow and the included jewel sword provides the ultimate ominous touch. 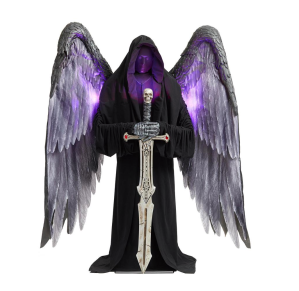 Care for a boat ride, anyone? This lifesize ferry boat carries tourists who unfortunately did not survive their boat trip down the canals onto their final destination, your back yard. It’s got animatronic rowing motions built in that activate once it senses passersby, as well as spooky sounds for an encompassing effect. The included LED lantern lights up the whole scene with a creepy glow, and it runs on batteries and an AV plug so the fun never stops. 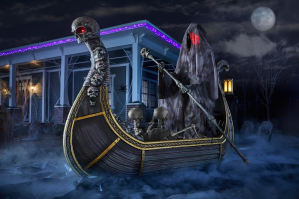 Terrified of spiders? How about one that’s nearly 6.5″ wide? This giant Halloween spider comes with beady red eyes and a hairy body that feels just lifelike enough to be terrifying. It comes on a 200″ spider web designed to hook onto a gutter and the ground, and spread out in front of your entire home. It’s easy to set up and can be easily posed in any which way, and comes with ground stakes for securing the entire display in place. 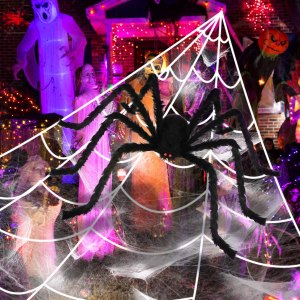 Many of the large Halloween decorations we found were arches, built to help spook out the entryway to your home and frame your entire decor scheme. This arch is a stack of various-sized pumpkins illuminated by 210 LED lights for a white, warm glow that lasts 80% longer than traditional lights. It’s also made of weather-resistant metal materials built durable against the elements. 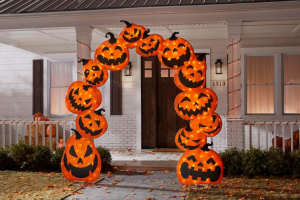 This familiar face towers almost as high over your visitors as the 12-foot skeleton does, and self-inflates so setup is super easy. It comes with stakes and tethers for holding it into place and is made of weather-resistant materials for outdoor use. It’s got energy-efficient LEDs built in for lighting effects and plugs into a power outlet for easy continuous use. 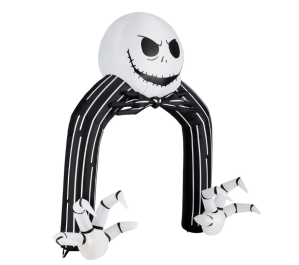 Now THIS is an archway. If you really want to go all out, and you probably do given that you’re reading this piece, this archway might be just the ticket. It’s also an inflatable, so the set up is designed to be easy, and it’s got built-in LEDs for an even more colorful design. It comes with both plastic and iron ground stakes and ropes for tying the whole thing down. It also comes with a power adapter for a seamless, continuous energy supply. 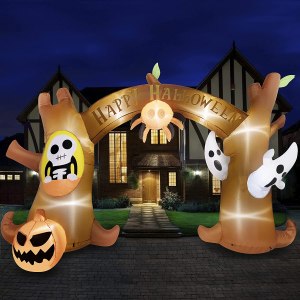 This giant reaper is a perfect alternative if you’re going for a piece of decor that’s just as tall as the famous skeleton, but is much easier to set up and store. It’s an inflatable, so it self-inflates in just a few seconds and incorporates bright LEDs for an added glow. It’s got a tall top hat for a more formal, spooky appearance and includes both stakes and tethers to tie it into place. 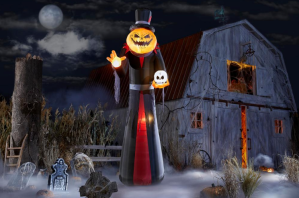 This is another 12-foot tall Halloween inflatable that comes in spooky black and neon green colors, self-inflates quickly and easily tethers to the ground for a secure setup. It’s got a scary face, long, spindly fingers and eerie moss hanging off of it for an arboreous touch. It can be plugged in for continuous use and is built for use indoors or outdoors, giving you flexibility when decorating. 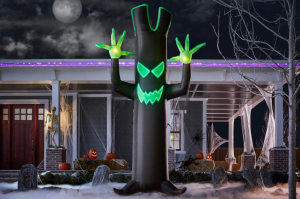 This Ghoul Ghost incorporates a ShortCircuit lighting effect which flickers the light on and off, for a creepier, uneasy effect that’ll draw attention to your Halloween decor from everyone who passes by. The purple color is hauntingly beautiful and the ominous face and outstretched hands complete the scary look. Like many of Home Depot’s best-selling inflatables it’s designed to self-inflate easily and comes with stakes for securing it to the ground. 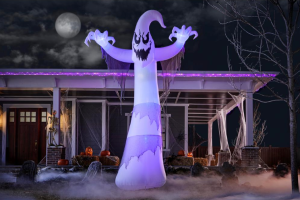 It wouldn’t be an article about giant Halloween decor if we didn’t mention Oogie Boogie, the adorable Disney character whose presence is funny, entertaining and unnerving all at the same time. This oversized inflatable Halloween decoration stands 9 feet tall and comes with a few accompanying characters attached to complete the scene. It self-inflates, comes with everything you need for easy installation and has LEDs built in for lighting. 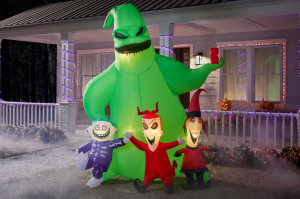 Cheap Decorations You Need To Get Festive This Halloween