The thing about ceiling fan pull-chains is that they’re not exactly convenient. That’s because, at the risk of stating the obvious, they’re hanging from the ceiling. If you have high vaulted ceilings or a fan that’s hanging over a kitchen table, it can be pretty hard to reach the pull-chain. This is especially true if you’re physically handicapped. While you could probably extend it by tying shoelaces to the pull-chain, there’s a more convenient and less ridiculous option: a ceiling fan remote.

There are remote controls for just about everything, so why not get one for your ceiling fan? Even if you can easily reach the pull-chain, there’s nothing wrong with embracing a little laziness and comfort when you’re trying to cool off on a warm day. Some remotes are designed to be used with specific brands like Hampton Bay, whereas others are designed to be universally compatible. Read on for the best ceiling fan remote controls that will make those warm days a breeze.

This remote is from Hunter, one of the earliest and most-trusted ceiling fan brands. Unlike some name-brand remotes, this option is universal and not designed to exclusively work with their own brand of fans. The receiver is included, as well as a convenient wall-switch mount. The buttons are simple and intuitive. There are the speed settings arranged in the shape of a fan, as well as the light button.

Pros: Simple remote from a trusted brand. Comes with the receiver switch and a wall mount.

Cons: No timer setting on the remote. 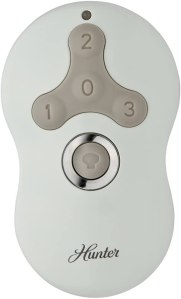 Installation is required; the included receiver must be mounted into the fan for it to work. An included wall mount allows you to affix the remote to a set place in the room.

Cons: Installation can be difficult. Receiver may not fit with every fan. No reverse feature. 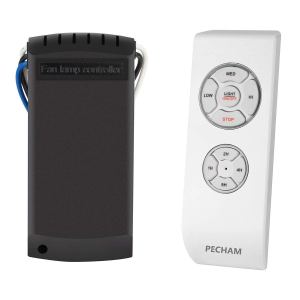 This remote control is not universal; it’s designed to be used with Hampton Bay fans. It can be used to control different models of Hampton Bay fans, typically without having to do any wiring. Functions include reverse, lighting dimmer and speed settings. However, there is no timer function.

Pros: Good option for replacing dead Hampton Bay remotes, can be used with Hampton Bay fans that didn’t originally come with remotes. Has a reverse function.

Cons: Not universal. Remote doesn’t have a timer function. 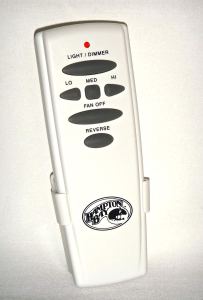 This universal remote will work with most fans. It comes with a receiver that has to be wired into the fan. It has a light dimmer, three speed settings, and it can be used to turn the fan on and off. The remote also has a holster that allows it to be mounted to a wall.

Pros: Compatible with most fans, includes a receiver and remote. 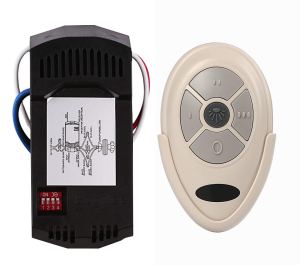 This option comes with everything you need to set up to install the receiver and remote, making it easy to convert any ceiling fan into one you can control with a remote. The receiver itself is small, which has the advantage of being able to more easily fit into different fans. The remote control has a high, medium and low function, a timer, as well as controls to turn the lights on and off. 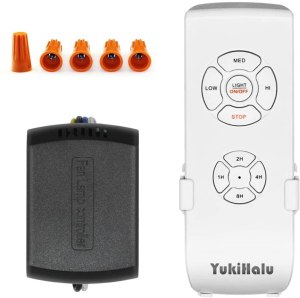 If your fan already came with a remote, but it’s since been misplaced or broken, consider this replacement remote from Pikeman. It doesn’t come with a receiver and is designed to replace certain models of Hampton Bay, Harbor Breeze and Hunter. The remote comes with a wall-mount, and the intuitive controls let you turn off the lights and switch between high, medium, low and off. The compatible models are listed in the info of the listing.

Pros: Good option if you just need to replace your remote. Comes with a mount plate. Simple controls.

Cons: Not universal, so you’ll need to check compatible models on the listing.