The cuckoo clock has been around since the 18th century and has seen little deviation from the original model. Though its exact origins are unclear, it was perfected in the Black Forest area of Germany, where many cuckoo clocks are still made today. A traditional timepiece that is known for its inventive designs and charming coo-coo noise to announce the hour, cuckoo clock continues to be a beloved piece of conventional décor.

If you’re looking to purchase a cuckoo clock as a gift or for yourself, Bavarian Clockworks.com has several tips to keep in mind. They recommend looking for clocks with the Black Forest Clock Association seal, which we’ve included on our list. We’ve also included movement options for winding once per week, once per day, or not at all for clocks that run on batteries. Choosing a style is also a big decision, with cuckoo clocks having several style options, including the Traditional and Chalet style, both of which are on our list. Of course, budget is also a big factor, which is why we’ve chosen three clocks that all come in at very different price points.

For more information on three of our favorite cuckoo clocks, check out our top picks below and get ready to take home a new traditional timepiece.

Authentic and designed with beautiful detail, the Hekas German Cuckoo Clock is made right in Germany with certification from the Black Forest Clock Association. The Chalet style clock is made with a walnut wooden dial, wooden hands and wooden bird and cuckoos once every half hour and the number of hours every full hour. The clock needs to be wound once per week and has an easy to use chain mechanism for winding that doesn’t interfere with the clock parts.

Pros: The Hekas clock comes with a two-year product warranty.

Cons: The Hekas is the most authentic German cuckoo clock on our list but also comes with the highest price tag. 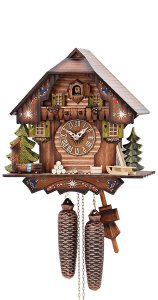 Hand carved by a master craftsman in the Black Forest of Germany, the River City Clocks One Day Hand-Carved Cuckoo Clock is made with durable all-brass mechanical movements. Like the Hekas, the Traditional style River City clock also comes with a two-year warranty.

Pros: The River City clocks are handmade and the clock you receive may vary slightly in color and design from the clock in the picture below, which means every customer gets their own unique clock.

Cons: Unlike the Hekas, which only has to be wound once per week, the River City cuckoo clock must be wound every day.

For those looking for an affordable and user-friendly alternative to standard cuckoo clocks, we recommend the Kendal Handcrafted Wood Cuckoo Clock. The Kendal runs on two D batteries and has an adjustable volume that includes high, medium and low options. The clock also has an automatic night shut off sensor and night silencer that is ideal for light sleepers.

Pros: The Kendal runs on batteries and therefore doesn’t need to be wound, making it a better option for those with mobility issues or people who travel frequently and aren’t always present to wind their clock.

Cons: The two D batteries required to operate the clock are sold separately and must be replaced at regular intervals. 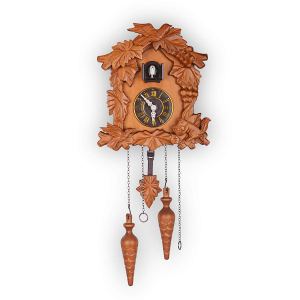