Less than a week ago, I’d never heard of a fidget spinner. Then the executive who oversees SPY suggested I get one because I click my pen way too much in our meetings. Then I heard that teachers were banning them from the classroom. This morning on the train I thought two middle schoolers were making fun of me, but when I turned around all they were doing was having fun with a fidget spinner.

After I adjusted to the idea that I’d taken yet another step into grumpy old man territory on the train, it hit me just how ironic it is that a device meant to alleviate tension was increasing my own.

Add Comment
2 People Commenting
Pete
5 years
I work with people who can't do without the fidget cube. Just the thing for long, boring...
dealersadagent
5 years
Some metal spinners are definitely more than $20 because of the unique and custom cutting design! Amazing...

Add Comment
2 People Commenting
Pete
5 years
I work with people who can’t do without the fidget cube. Just the thing for long, boring…
dealersadagent
5 years
Some metal spinners are definitely more than $20 because of the unique and custom cutting design! Amazing… 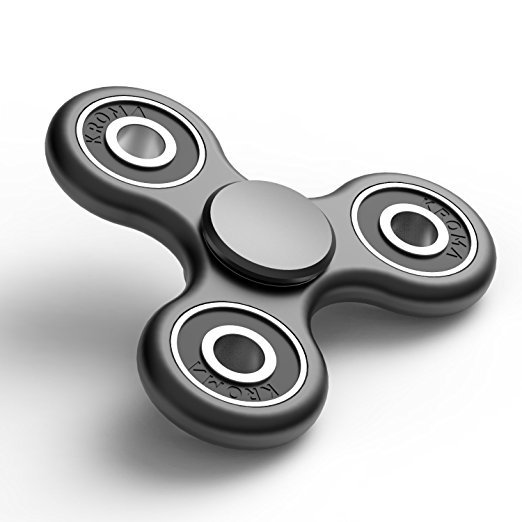 Originally invented by Catherine Hettinger as a toy for her 7-year-old daughter who suffered from an autoimmune disorder that causes muscle weakness, the idea never caught on until last December, when Forbes called fidget spinners, “The must-have office toy for 2017” — long after Hettinger had let the patent lapse for lack of funds. By March, online reviews were all over the place, praising the fidget spinner for being an affordable and useful toy. In April, Gwyneth Paltrow gave her kid a bunch of them for his eleventh birthday.

Then the backlash started. In a blog post, a New York schoolteacher wrote: “Let’s stop with the flowery euphemisms. It’s a toy and I hate it. I actually have a visceral reaction when they emerge from a pencil case or pocket, like a sadistic version of Pavlov’s bell experiment.”

Dr. Mark Rapport, the director of the Children’s Learning Clinic at the University of Central Florida’s department of psychology tells the Daily Mail that, “using a spinner-like gadget is more likely to serve as a distraction than a benefit for individuals with ADHD,” despite the copy on Amazon touting them as great for people with ADD and ADHD.

Still, as a cheap distraction — and potential stress reliever — you can’t go wrong. For under 20 bucks (with some as cheap as $3), the Fidget Spinner uses aluminium alloy counterweight bearings and a high-density plastic frame that allows you to hold the toy with two fingers, while using another to start and stop motion. Or, hold the spinner in one hand and use the other hand to spin it rapidly using small continuous strikes to keep it going.

Despite the inevitable backlash, it doesn’t look like the Fidget Spinner is going away anytime soon. Fidget Spinners currently occupy more than half the list on Amazon’s 20 best-selling Toys and Games. Two other positions are occupied by the Fidget Spinner’s equally addictive cousin — the fidget cube.