Updated on October 18, 2021: We’ve updated this post with some additional photos and information now that the DIY project is complete.

SPY Makers is a new conversation series where we sit down with inventors, designers and entrepreneurs to talk about their work. In this story, SPY Site Director Tim Werth talks to Ohio resident and DIY genius Alan Perkins, the creator of the viral giant skeleton hands haunted house.

Last week we talked to Alan Perkins, the Ohio resident and DIY genius responsible for the most epic haunted house of all time. Perkins created giant skeleton arms and hands that appeared to be bursting from the ground and grabbing a smaller skeleton. To give you a sense of scale, that “smaller” skeleton is the famous 12-foot-skeleton from The Home Depot.

Now, Perkins has completed his masterpiece by adding a giant skull bursting from his roof, and you have to see this DIY Halloween display for yourself:

That epic DIY haunted house in Ohio just got a massive new addition! We talked to the Halloween genius behind this DIY display.#Halloween #Halloween2021 #HalloweenDecorhttps://t.co/rXGJ4FCXx1 pic.twitter.com/F9HifnnPOg 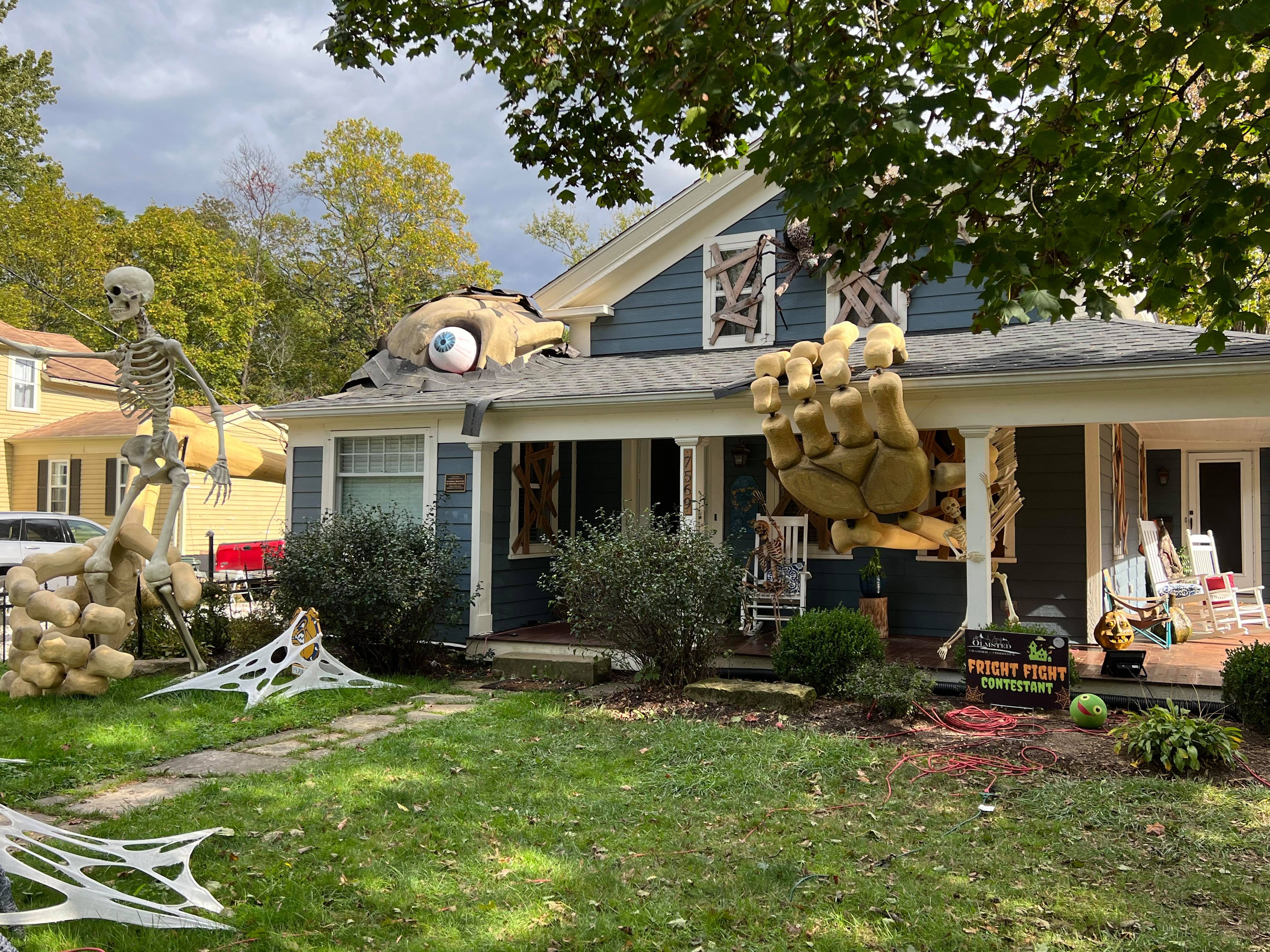 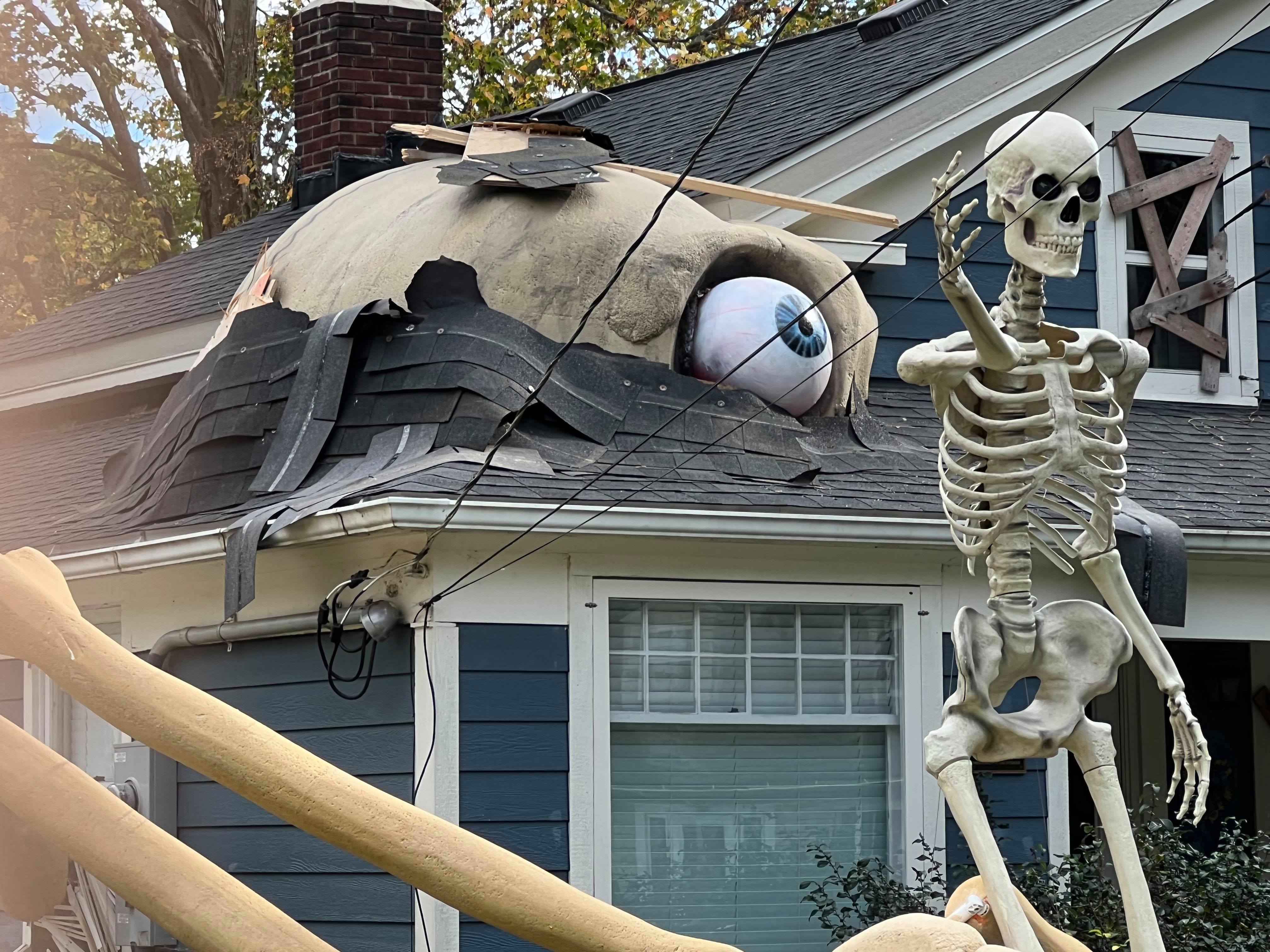 The Perkins house has already gone viral several times over, and now that the giant skeleton is complete, Perkins wants to share his knowledge with the world. The Ohio-based Halloween genius has uploaded step-by-step instructions for his project to the DIY website Instructables.

You can check out additional photos of the project below and on our Twitter and Instagram pages. Our original story on the Perkins house is below.

Here at SPY.com, we consider ourselves the world’s leading experts on giant skeleton Halloween decor. We talked to The Home Depot team behind the iconic 12-foot skeleton, aka Skelly. Because that decoration has been sold out for months, we’ve kept our eyes peeled for decent alternatives. Recently, we covered an exciting new trend in Halloween decor — using an army of posable skeletons to create creepy and cinematic Halloween-scapes in your front yard:

Wish I’d thought of this. pic.twitter.com/13V9dWOCnm

This is impressive af!! 😍 I wonder who would win though… Ohio Skeleton giant or Colorado Skeleton army ☠️👻🧐 pic.twitter.com/TA96wlAvLx

However, there’s one haunted house in Olmstead Falls, Ohio that puts all other efforts to shame. Alan Perkins, an Ohio resident, dad and Halloween enthusiast, has created the most epic Halloween front yard display that we’ve ever seen. If you find yourself trick-or-treating down River Road in Olmstead Falls, a Cleveland suburb, the Perkins house will be hard to miss.

In an act of pure Halloween genius, Perkins created giant skeleton arms, which appear to be emerging from the earth to grab a 12-foot skeleton in their bony fingers. The DIY handiwork completely dwarfs the 12-foot skeleton, which is no easy feat. 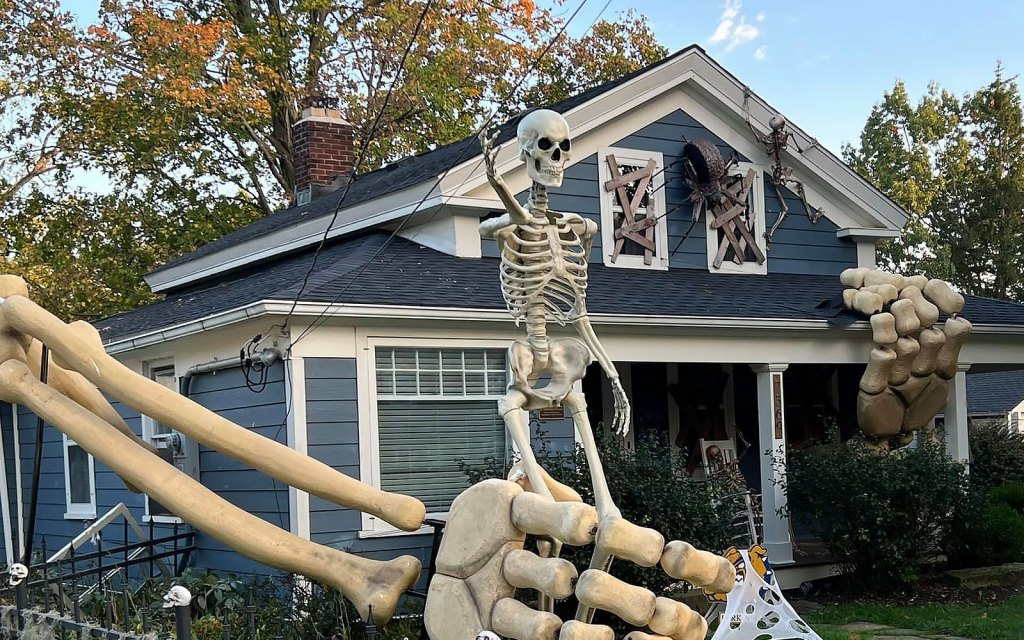 Perkins was kind enough to share behind-the-scenes photos of his project, which we’ve posted below. In addition, we spoke with Perkins on the phone so we could ask him what it feels like to win Halloween.

“It’s kind of fun, but it’s a bit surreal because it wasn’t ever intended,” Perkins told SPY.com “I shared it for a small Facebook group for Cleveland haunters… I didn’t expect it to go anywhere, I just shared it there like I’ve done before, and all of a sudden it became a global thing.” 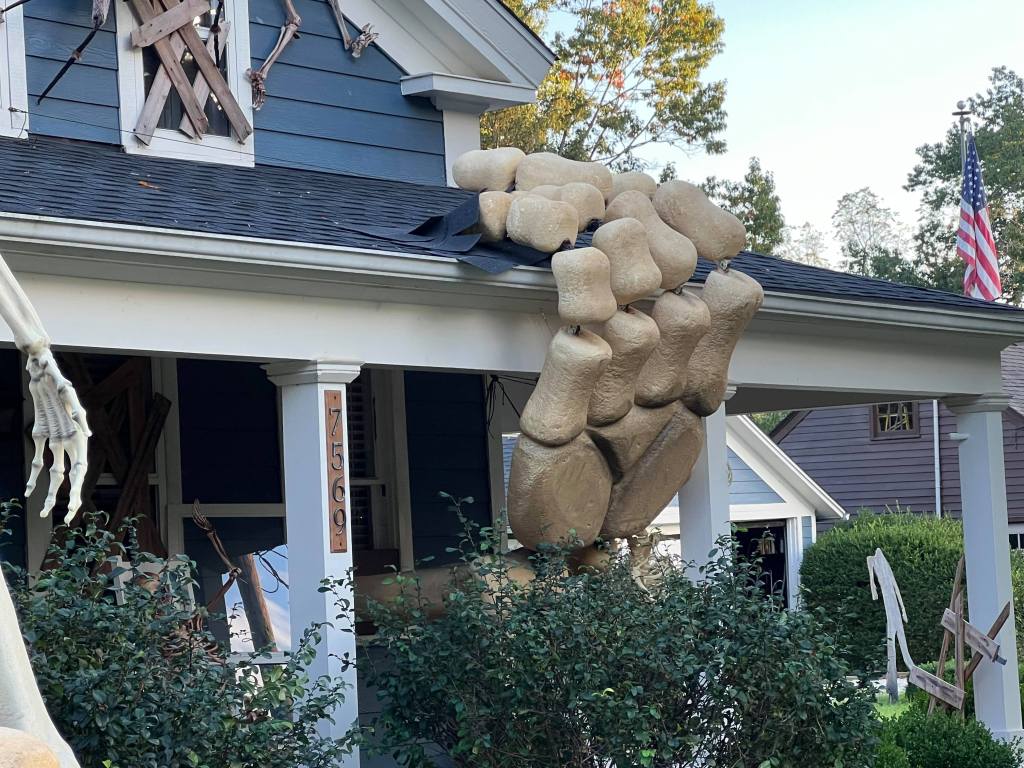 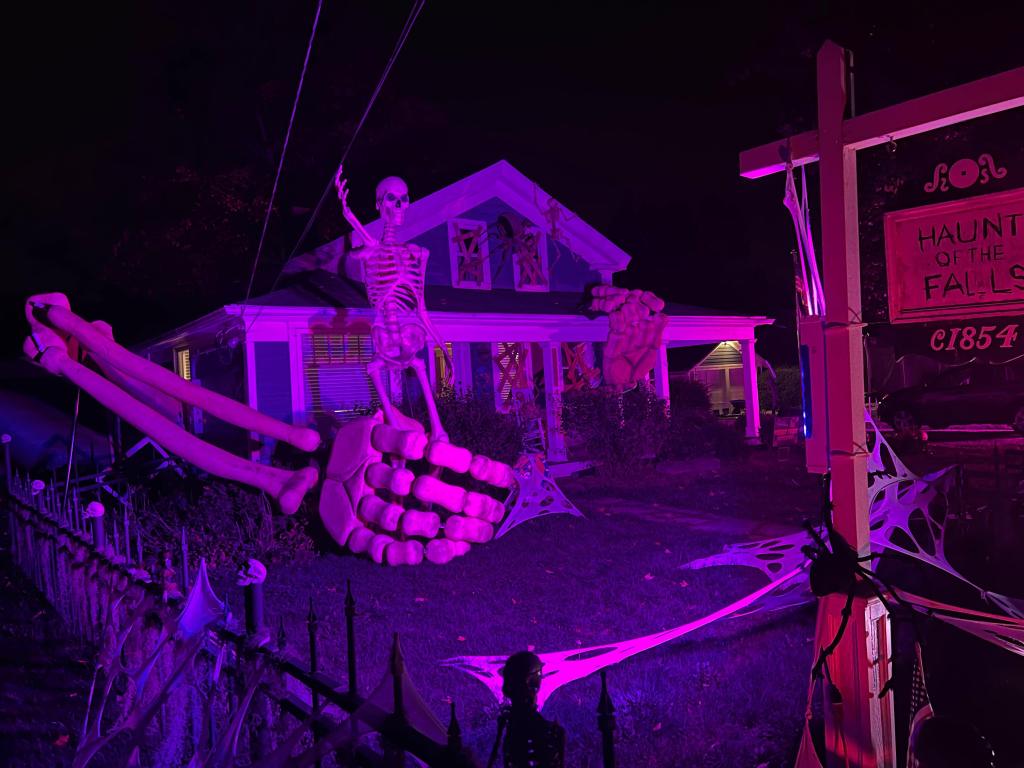 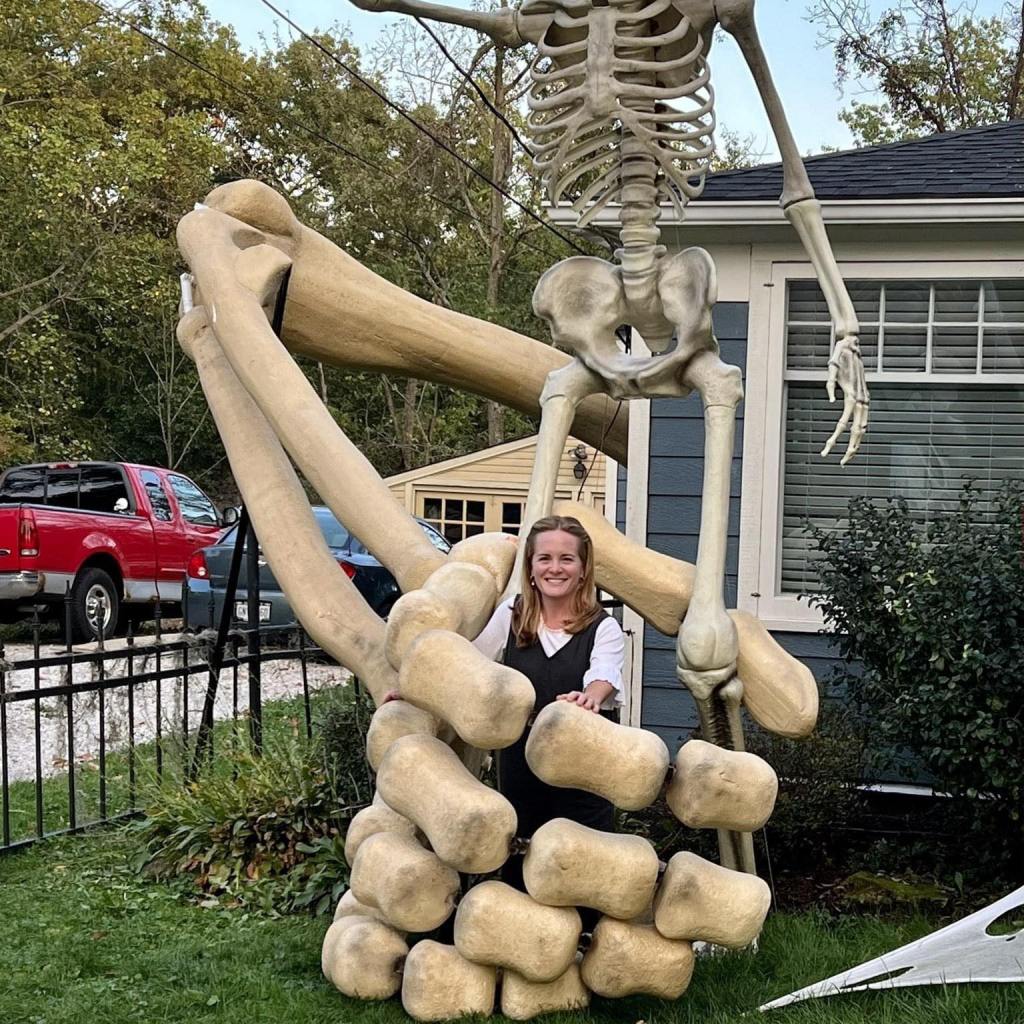 How The Viral Giant Skeleton Halloween Display Came To Be

On October 1, Perkins shared photos of his project to the Cleveland Haunt Club Facebook group, and his story quickly went viral.

A follow-up post detailing his progress — that’s right, the Halloween display isn’t even finished yet! — collected more than 20,000 comments and 94,000 reactions before the Facebook group was switched to private.

“Home Depot was out of giant skeletons. So I decided to make one,” Perkins wrote in a Facebook post. “I feel I might have gotten the dimensions a bit out of scale. Progress photo. Going for a Disney Coco vibe with a bit whimsical but very much a skeleton. A couple arms to go and a skull and my prop will be done. My house is in Olmsted Falls on River Road. Can’t miss it but I will post the address when the skeleton is up.”

The giant skeleton arms and hands are made from foam that Perkins bought years ago on the assumption that he would eventually find the perfect creative project. The other skeletons and Halloween decor come from his extensive collection.

Perkins told us that if he has time before Halloween he’s going to be adding a skeleton head to the top of his house to complete the scene. Despite appearances, he estimated that he’s only spent $500-$700 and one month of his time on the project (The Home Depot skeleton was loaned out by a friendly neighbor). He works on the project after work and on weekends, putting in a few hours each day. Despite appearances, Perkins isn’t an engineer or contractor; his construction skills are of the DIY variety. By day, he works as a health and safety professional in a manufacturing facility.

“The attraction I think is the creative side of it. It’s probably my favorite holiday, but after October 31 there are no Halloween decorations up in the house. I’m not one of the Halloween nuts that decorates all year long. I just enjoy building oversized stuff because it’s fun and it gives me a creative outlet to do things,” Perkins said.

His past creations include a haunted pirate ship and a lifesize LEGO Batmobile that his son could sit in. Perkins said that his young son and daughter are the perfect age for Halloween fun, and that they love the house’s viral fame. So far, his neighbors have been supportive, too.

Clearly, Perkins is proud of having “that house” on the block, the one that goes way extra for Halloween. But there’s a twist: Perkins said Halloween is not his wife’s favorite holiday, and so he plans on packing everything away come November 1.

“My wife is not a big fan of Halloween — she says Halloween is not even in her top three holidays. She puts up with it, she goes along with it, but the minute Halloween is over she says, yup time to start putting stuff away.”

You can check out more photos of the epic Halloween display below. And if you’re feeling inspired, check out our guide to the best posable skeletons for sale in 2021. 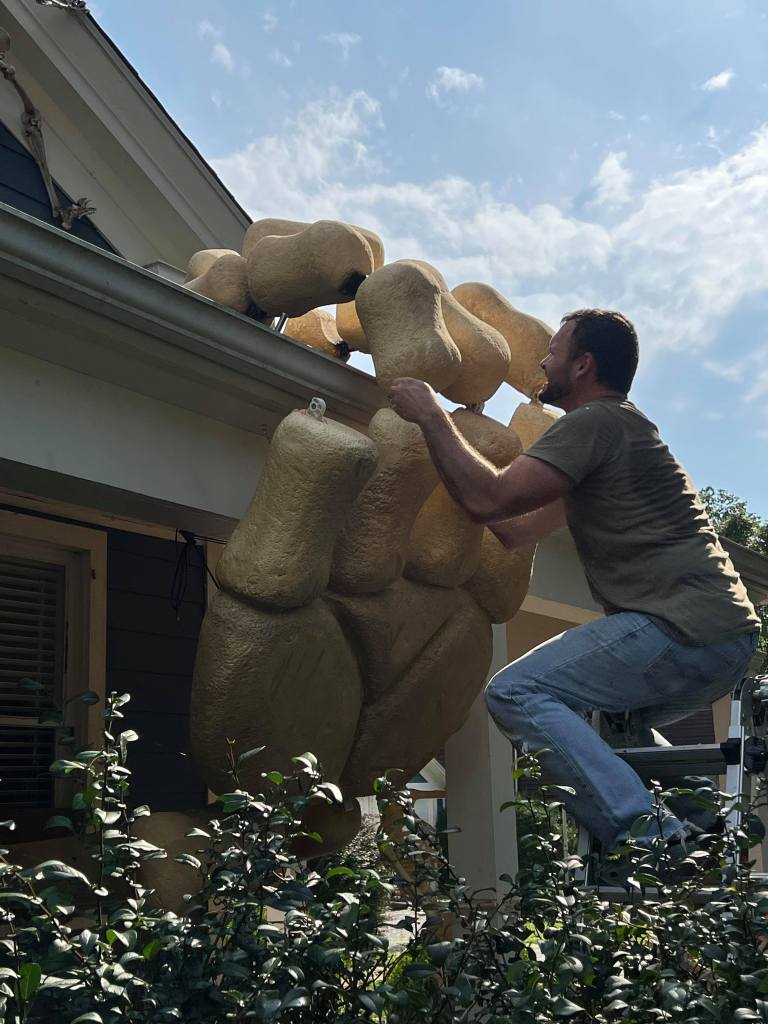 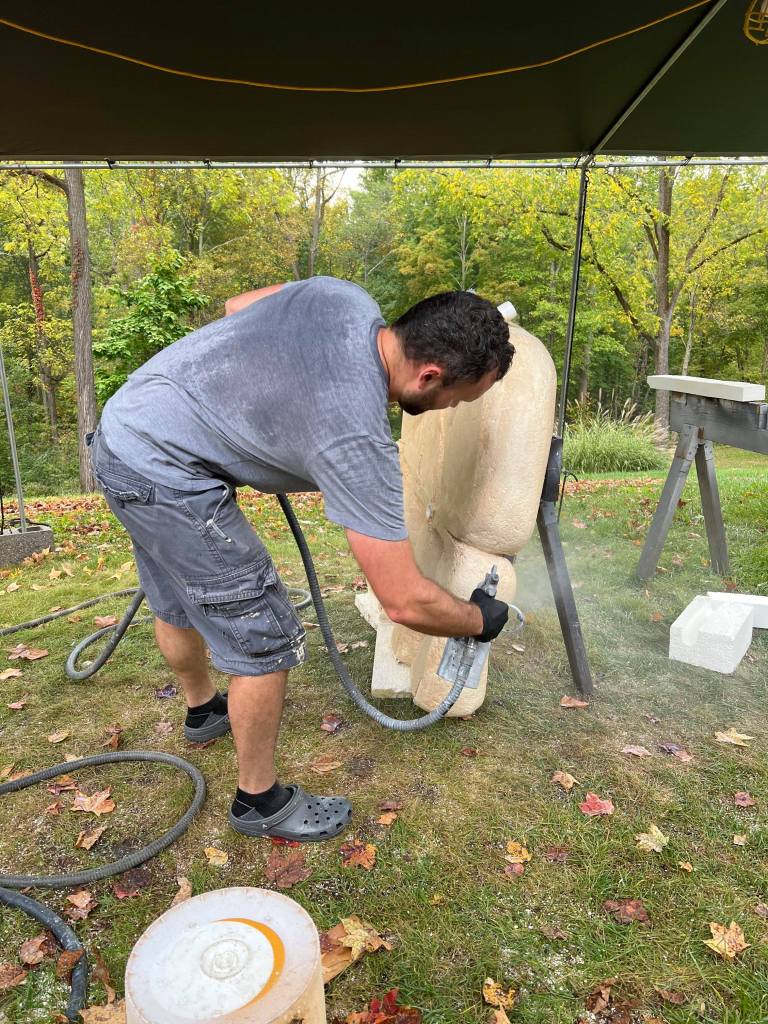 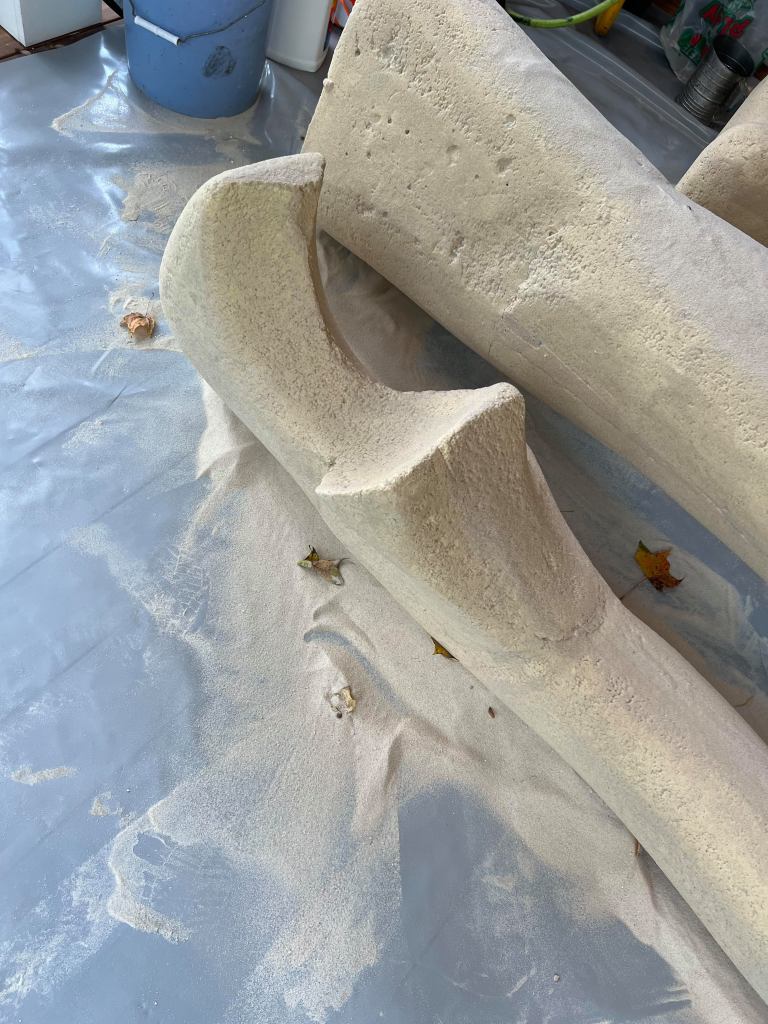 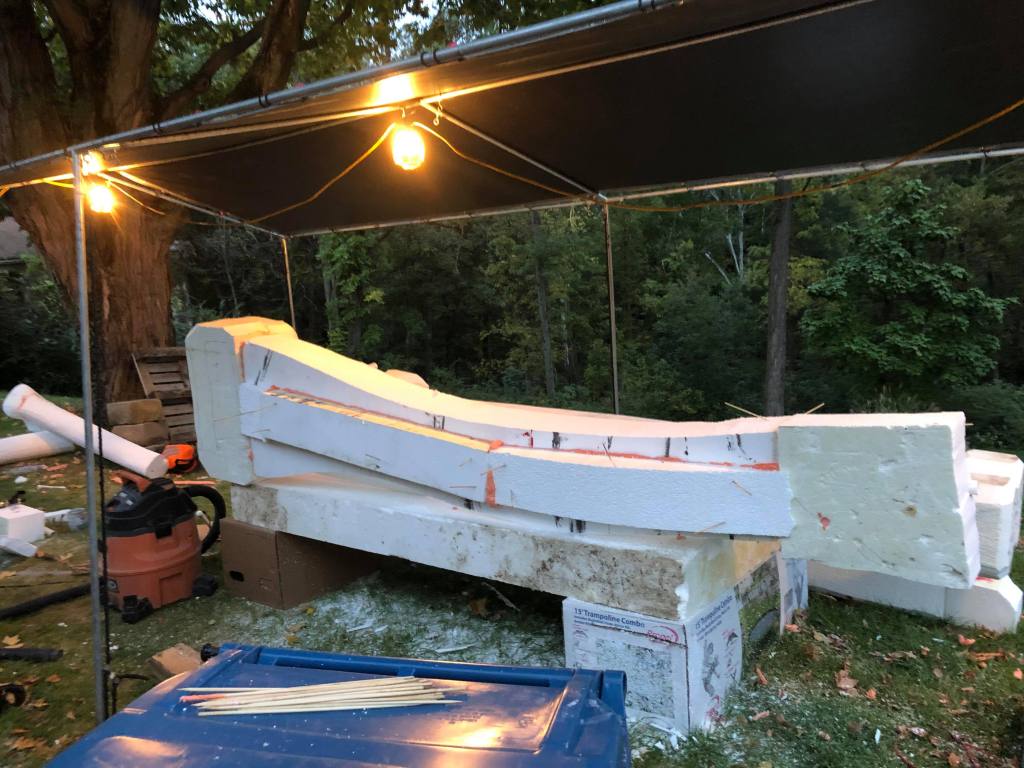 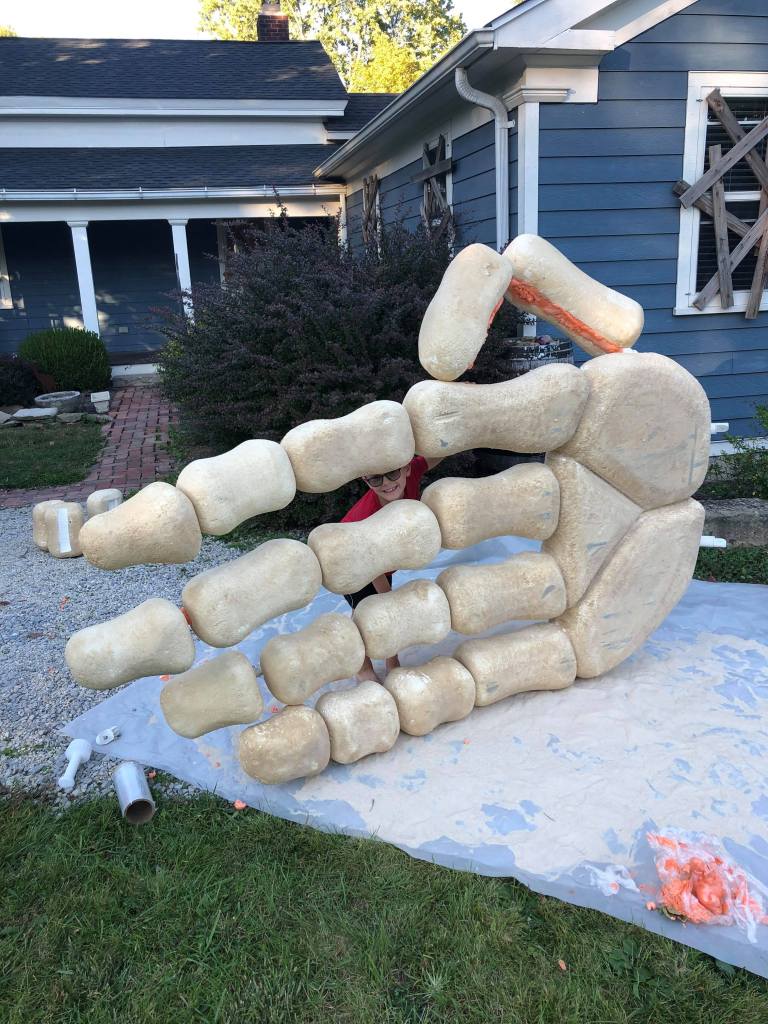 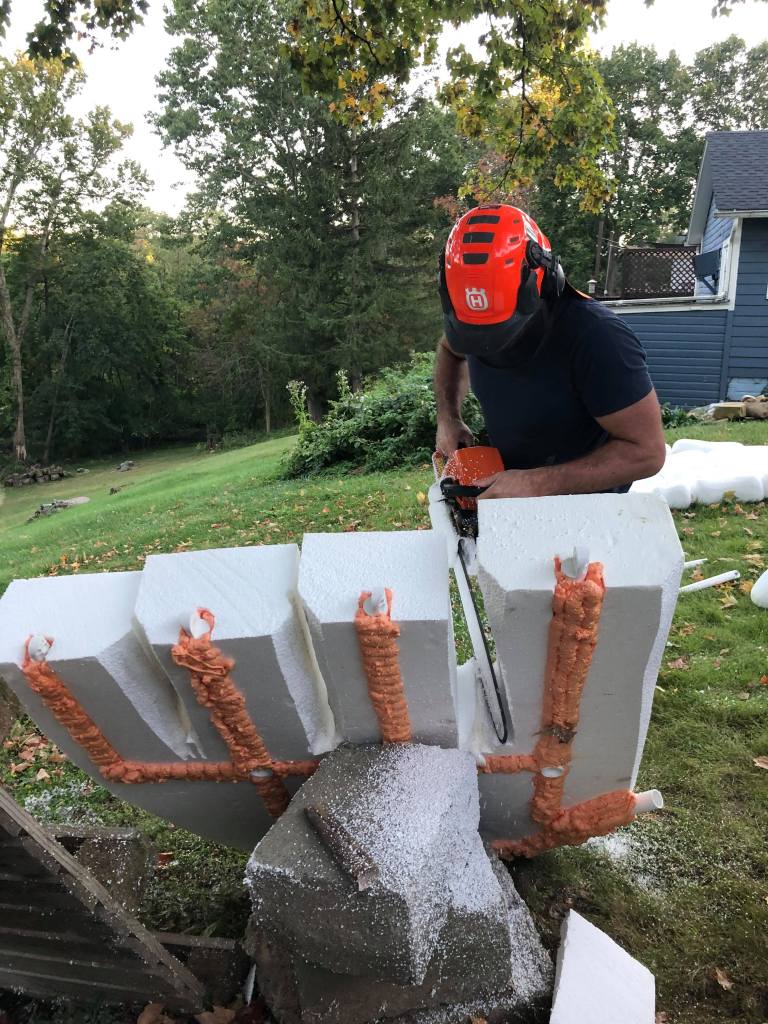 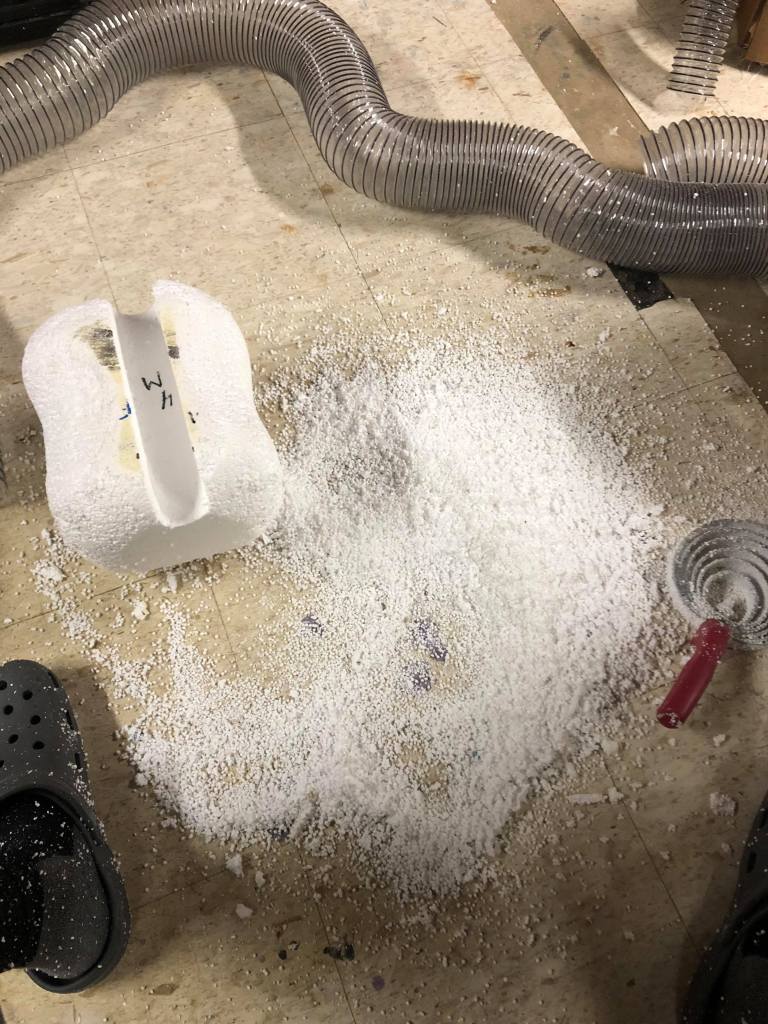 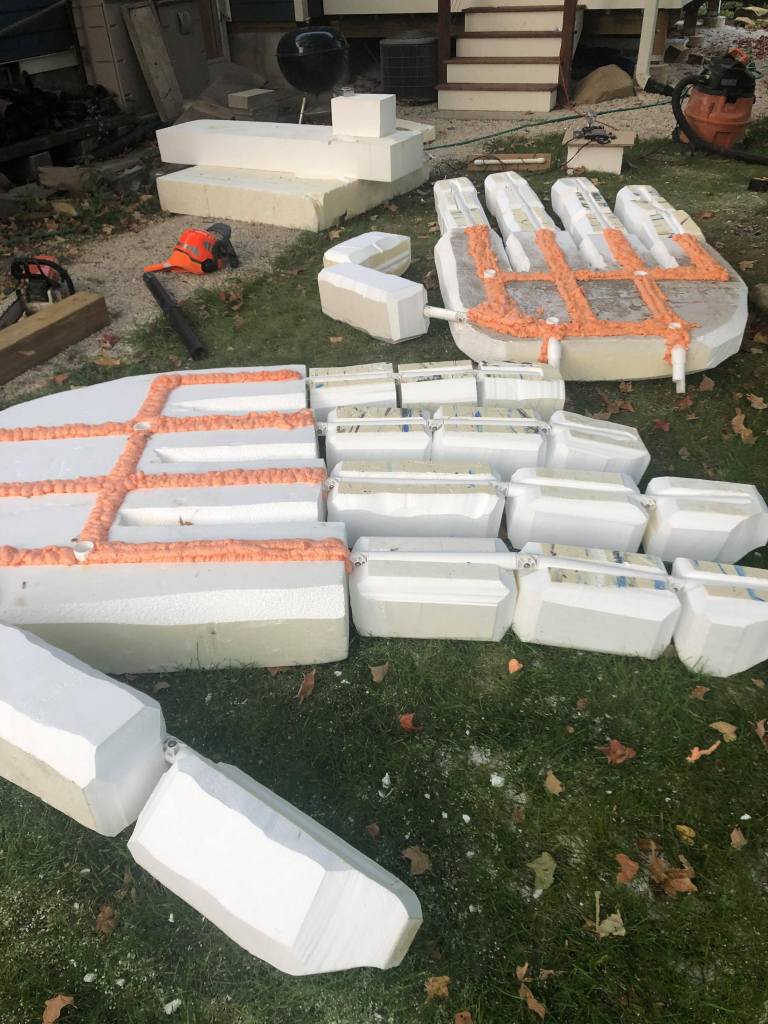 The Scariest Halloween Masks of the Year