It seems celebrities really are just like us. Kim Kardashian is getting in on the fidget spinner craze with her very own version of the stress relieving toy launching on her website.

The 36-year-old reality star dropped the “Daddy Money” fidget spinner on her Kimoji store over the weekend, just in time for Father’s Day. The metallic gold spinner features a dollar sign design that revolves around a circle inscribed with the word, “daddy.” Kardashian is selling her fidget spinner for $15. 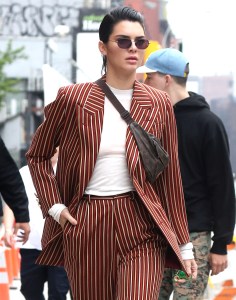 
Though the fidget spinner was reportedly created more than 20 years ago, it’s seeing renewed popularity in recent months, thanks to both school children and adults alike. In fact, Kardashian’s younger sister, Kendall Jenner, was recently spotted by the paparazzi in New York wielding one of these stress relief toys during a walk.

Ideal for both calming nerves and helping with distractions, the fidget spinner has been cited for its ability to promote calm and focus. But, the toy has also been cited by teachers as a nuisance, with many schools now banning the toy from classrooms.

Not feeling the $15 Kimoji fidget spinner? We found a similar one on eBay for just $0.99.