If I was stranded on a deserted island and could only bring one piece of cooking equipment it would be a dutch oven. Let’s be honest — few things can compete with the dutch oven when it comes to kitchen must-haves, and a Le Creuset one? Well, that’s the cream of a very expensive crop. Le Creuset has set the standard for top-performing French cookware for decades for everything they create — but especially for these magic pots they’ve mastered that put all other pots, with their meager heat distributing capabilities and not-that-shiny lids to shame. I’m mostly joking — there are actually a plethora of solid cheap dutch ovens and Le Creuset Dutch Oven alternatives out there worth checking out, all of which we’ve included on this list.

First off, we need to discuss what makes the Le Creuset one so perfect, and why it costs what it does. Then we’ll break down what’s non-negotiable when it comes to a dutch oven worth turning a ladle at, and how to care for it once you’ve gotten your oven mitts on one.

In this article we’ll be covering:

Editor’s Note: Due to the time of the year when this article is being written some of the dutch oven alternatives may be low in stock due to holiday shopping. We fully expect these products to be restocked shortly after the holiday season, which is why we’ve chosen to include them anyway. 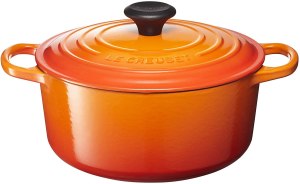 Why are they so expensive?

In simple terms — they cook impeccably – with incredible attention to detail and a performance that has yet to be matched by another dutch oven. They also last a really long time, with some food bloggers using theirs past the 30-year mark, they’re easy to clean in the process and look beautiful on any stove.

How are Le Creuset Dutch Ovens made?

Le Creuset is made using a vigorous process that involves mixing together metals, minerals and a unique sand mold that differentiates each dutch oven from all others ever so slightly. Each dutch oven is then coated in triple layers of a glass enamel and inspected by 15 different artisans before sale. The “porcelain enamel” is actually glass that bonds with the cast iron at high temperatures when baked at temperatures between 1200 and 1400°F. I know, it’s a long road to your stove for this kitchen gadget.

Are they really that great?

They’re praised for their performance by cooks, professional chefs, product researchers and cooking experts alike. We’ve written about them numerous times on this site for their quality and abilities, and we can’t understate how impressive this piece of French cookware really is. You can use other dutch ovens, and you should, but when it comes to quality they’re unmatched. However, do you absolutely NEED the Le Creuset version in order to cook your beloved beef bolognese or Julia Child’s coq au vin to near perfection? Definitely not. There are plenty of Le Creuset Dutch Oven alternatives worth looking at below.

How do you use and care for a dutch oven?

Dutch ovens are immensely popular kitchen devices because of their versatility, and the heat conduction and distribution they provide due to being made of cast iron. They’re commonly used to brown meats and vegetables as well as create sauces, stews, soups and other dishes that need to simmer for hours at a time. Dutch ovens can be used on a stove top and in the oven, and with the lid on can keep a dish warm for hours without losing heat, and preserve all of the moist juices in the food while it cooks.

In terms of caring for a dutch oven, it’s pretty straightforward. The high-quality ones have a coating that makes them simple to soak, scrub and lay to dry. You can put most of them in the dishwasher, but hand washing is recommended for best results.

When it comes to Le Creuset alternatives, STAUB is about as close as you can get to the real thing. Their round cocottes are also made in France and also crafted by a group of about 20 artisans who ensure each one is up to snuff before selling. Each one’s lid is heavy and adequately seals in the moisture so your dish stays juicy and tender inside. This dutch oven is also oven safe up to 900°F without the lid on and up to 500°F with the lid, higher than nearly every other dutch oven option on this list. The durable enamel bottom works on all stovetops and the matte texture inside is great for browning. This dutch oven has nearly perfect reviews on Amazon and while you’re not saving a whole lot off the Le Creuset option, it’s still about $100 less and sacrifices almost nothing in terms of quality. 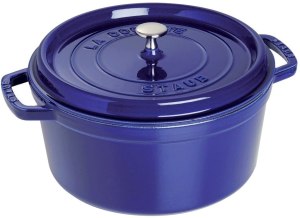 Cuisinart has been a trusted brand in the cooking space for years due to their high-quality kitchen gadgets like food processors, blenders and coffee makers. They also make a great dutch oven that’s a much cheaper alternative to Le Creuset and other French options. It’s made of cast iron and has a porcelain enamel exterior that’s both high-performing and beautiful. These pots are super durable and work on stovetops as well as in ovens and broilers. It has excellent heat retention similar to the Le Creuset and has wide cast iron handles for an optimal grip when lifting it out of the oven. This 7-quart option is also quite a bit larger than Le Creuset’s standard model, so consider the size of your stove and kitchen top before buying. There are fewer color choices with this one, and since the company has only been around since the 70’s it’s hard to gauge longevity but for an alternative it’s a solid pick. Please note – at the time of publishing this item was backordered on Amazon. 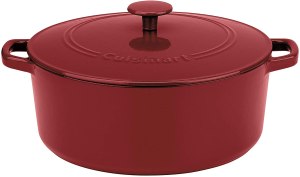 Amazon, no surprise here, wanted in on the dutch oven action and made their own high-performing pot. It costs more than $300 less than Le Creuset’s option and while it may not last as long it’ll perform as well as you need it do for most dishes. It’s oven safe to 400°F, not as great as other options but a do-able rating for most recipes, and it’s made of the same cast iron material that’s excellent at heat distribution and reliable retention. The enamel on the inside, however, is not non-stick which might prove to be a little extra working during the cleaning process. In terms of looks, the AmazonBasics one has the same polished glow as the Le Creuset Dutch Oven and a shiny knob on top evocative of the classic design. 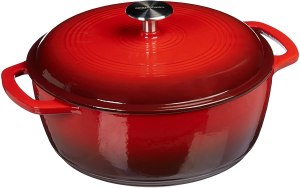 It was a hard choice between this one and the STAUB for the top choice on this list because so many reviewers love Lodge’s rendition of Le Creuset’s dutch oven. It has a large cooking capacity at 4.6 quarts and is made of the same porcelain enamel on cast iron material that’s common with the other pots. It has a heavy cover that seals in the moisture and “self-bastes” the meal throughout cooking. Another highlight of cooking with this Lodge Dutch Oven, according to users, is that the angles are rounded inside the pot which makes it easier to clean. Users also highlighted the beautiful design, great color choices, and the longevity of the product — many of them had owned theirs for years without any problems or wear and tear. It’s a high-quality pick that still manages to cost less than $100 total. 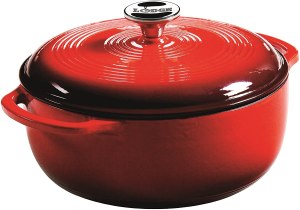 Great Jones is a cookware brand that was established in 2018 whose dutch oven, named “The Dutchess,” has made a splash for its beautiful posh design and high-quality cooking performance. It has a smooth, soft exterior with sturdy handles and a lid handle for easy removal. The top is the same heavy, cast iron, moisture-sealing design you’re used to seeing on dutch ovens. This pot also has a 6.75-quart capacity and an oval shape which gives you plenty of room on the bottom for browning, searing, caramelizing, sautéing and getting that maillard reaction you want. It does, also, take up more room on the stove and in the oven so keep that in mind. The interior of this dutch oven is gray, so it’s easy to see when butter has browned or food has cooked but it’ll also hide stains that may develop over time. It’s sand-cast using German machinery, painted and then fired three times for a matte finish that’s beautiful and anti-chip. 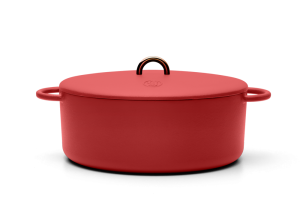 Another affordable Le Creuset dutch oven alternative is this one from Tramontina. It’s well-constructed, has sturdy side handles for easy lifting and is made of heavy-gauge cast iron for superb heat conduction. The cooking surface has a coating of porcelain enamel that’s off-white, smooth to the touch and easy to clean. It’s also PFOA and PTFE-free, so no toxic chemicals will leach into your food alongside delicious juices. It’s 6.5-quarts in size and not oval-shaped, so it’s quite deep for a round dutch oven. This makes it perfect for all your classic dutch oven recipes, but especially those soups, stews, chilis and large liquid dishes. For about $100, this dutch oven is another solid alternative to the pricey Le Creuset cookware. 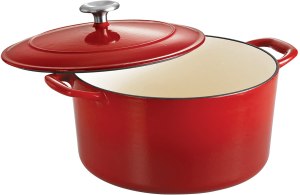 This dutch oven is made by Crock Pot, the inventors and fine-tuners of slow cooking. They know even heat conduction and distribution, and this dutch oven lives up to their reputation. It’s compatible with all stovetops and comes in 3- 5- and 7-quart sizes. It’s oven safe up to 450 degrees and clearly designed to closely resemble the Le Creuset pot with its textured lid and distinctive handles. The lid is also self-basting, meaning it’s designed to gather liquid from steam up top and redistribute it back into the dish as it cooks. It also comes in a wide variety of colors, including the aqua pictured below. 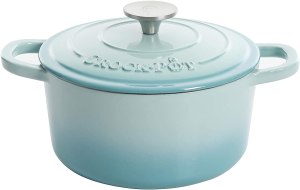 This dutch oven from Best Choice Products is great for so many reasons. First of all, it’s a decent size at 6-quarts, large enough to use at big family gatherings, weddings, potlucks, etc. It has a temperature capacity of 480 degrees and versatile enough to use on all stovetops as well as your grill and oven. It has heat distribution condensation bumps on the lid’s interior and a very tight seal to retain moisture when cooking. The best part about this dutch oven is the coloring on the inside — the light color makes it easy for beginners to see when food has browned, and it makes it simple to see and clean stains. It has two large side handles that make it easy to grip and pull out of the oven in a flash if need be, and it has a non-stick finish so you won’t have to deal with scraping off stubborn caked-on food. 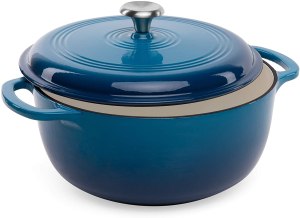 Here’s Why The Dutch Oven Is Making a Comeback