America after World War II was a flurry of domesticity, with families reunited and babies being born in record numbers. So naturally housing boomed, too, and with that flourished a prolific period in architecture and design.

From 1945 to 1962, the magazine Arts & Architecture sponsored a project commissioning the era’s top architects – names like Neutra, Eames, Saarinen – to design and build affordable, functional model homes. One stipulation: they had to be easy to duplicate to feed said housing demand, hence their name Case Study Houses. 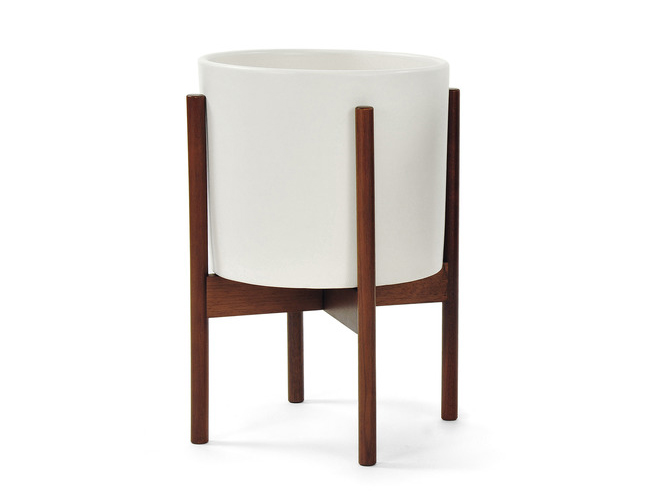 What’s left of these structures are now-vintage real estate gems, bought up and restored by west-coast celebs and design aficionados who can afford it. But that mid-20th century look of mass-produced materials thoughtfully designed to link form with function went beyond just four walls – creating the contents of those homes took on just as much significance. Right down to the most utilitarian items, like the planter seen here.

At its core, it’s a simple ceramic cylinder, but its proportions have been carefully considered, creating a subliminal and sublime harmony for the eyes. Its stand consists of a pair of Brazilian walnut or powder coated steel cross-hatched legs, made without embellishment or fuss.

Contemporary design in this century may be more about the mix than subscribing to one school of design, but pieces like this have become timeless classics. Punctuate a rigorously period-correct modern home with a set of these correlating mid-century modern planters, or weave them into an eclectic layering of styles. However and wherever you use them, there’s no denying the simple beauty of these objects, exactly the intended effect of great design.