If you think this lamp looks familiar, it’s more than likely you’ve seen it before, having been in the Museum of Modern Art’s permanent collection since 2000. Created by Finnish designer Harri Koskinen in 1996, he was inspired by industrial glass bricks when he created what he called, simply, the Block Lamp. 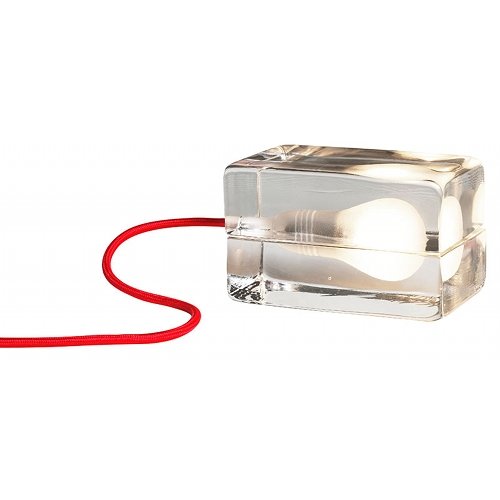 And simple is what this piece is about, at least from the outside. The effect is that of a light bulb frozen in ice, only to never melt in a visual suspension of time. While two hand-cast glass blocks form around a matte sandblasted bulb shape, creating the illusion of a conventional light bulb encased in glass, the lamp’s source of light actually comes from a 25-watt candelabra concealed inside the bulb. Placed on a floor or table for ambient lighting, the MoMA Block Lamp will add a surrealist touch to your environment.

To commemorate the 20th anniversary of its design, MoMA and Koskinen have released the special edition seen here, replacing the first generation’s white woven cord with an eye-catching red one. Elevating the mundane in ways like this are what separate designers from true thinkers, and from the likes of memorable pieces like this, Harri Koskinen has certainly spent the span of his career deep in thought.